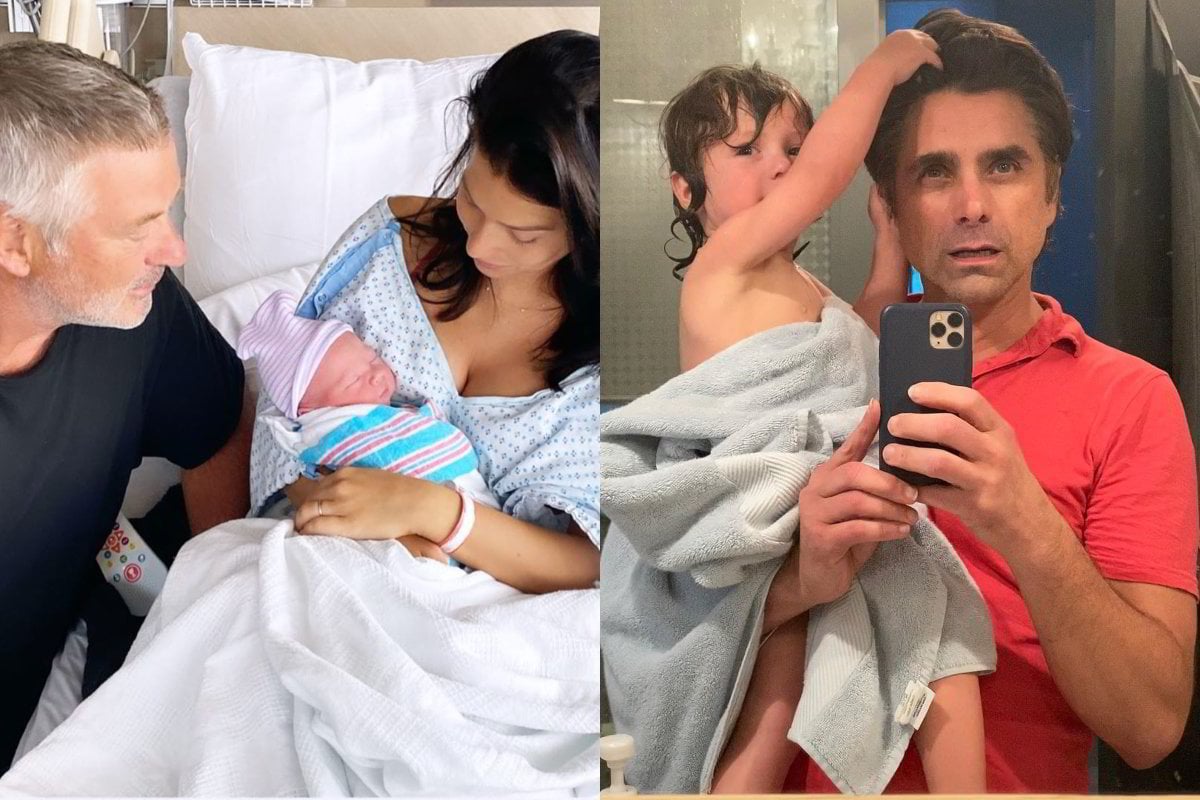 "We had a baby last night. He is perfect and we couldn’t be happier," she wrote in her Instagram announcement. In another post, she introduced him as Eduardo Pau Lucas Baldwin.

The 36-year-old and her 62-year-old husband are also parents to daughter Carmen, seven, and sons Rafael, five, Leonardo, three, and Romeo, two.

Side note: If dads were home smart speakers... Post continues below video.

Baldwin has a 24-year-old daughter, Ireland Baldwin, with his ex-wife Kim Basinger.

With six children, Baldwin is no stranger to parenting, but he is perhaps one of the most well-known of a growing group of Hollywood men that embrace parenthood later in life.

We had a baby last night. He is perfect and we couldn’t be happier 🌟. Stay tuned for a name🤍

In April 2020, Richard Gere, 71, discreetly welcomed his second child with his wife Alejandra Silva, who is 37. They also have a two-year-old son Alexander.

While he'd played fathers many times before in movies - including to 12 children in Cheaper by the Dozen - and had previously been married to actress Victoria Tennant, Martin told the Daily Telegraph he wouldn't have had his journey to parenthood any other way.

"It's fantastic — you have all the time in the world. You're all set and secure in life, and you're not building your career, so you have a lot of time. When I was younger, I was selfish and focused on my career. Now I'm just hanging around the house playing with [my daughter]. It's great."

It's a sentiment shared by Jeff Goldblum, 67, who became a dad for the first time in 2015 with his wife, Canadian Olympic gymnast Emilie Livingston. 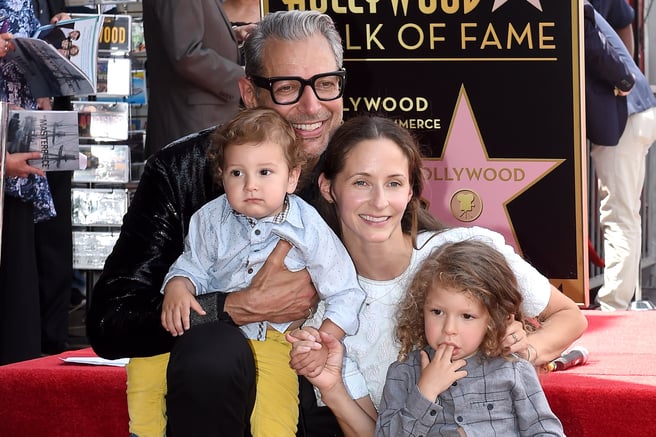 Jeff Goldblum with his wife and children in 2018. Image: Getty.

They now have two sons, Charlie Ocean and River Joe.

"I never thought that I was going to do it," Goldblum said about fatherhood in a 2019 Radio Times interview.

"I had never been particularly passionate about it or envisioned it for myself – I don't have any nieces or nephews, had never seen a birth before.

"In the couple of lovely previous marriages I had, there was some fantasy talk about it, but never any serious business. And I always thought it was a good thing that I didn't have any drama with kids and breaking up."

Goldblum said he and Livingston came to the decision to have children after a year of thinking about it and speaking to his therapist.

In 2014, Simon Cowell became a dad when his girlfriend Lauren Silverman gave birth to their son, Eric. He has been open about how he'd never expected to become a dad, but now at 60 with a six-year-old, Cowell admits fatherhood "changed him". 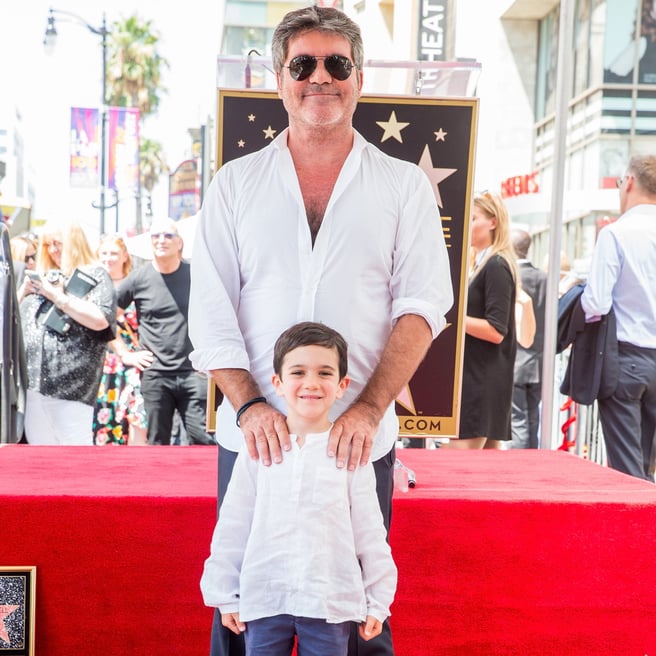 Then there's Hugh Grant, who has five children - his first, a daughter with on-and-off partner Tinglan Hong, was born in September 2011 when he was 51.

While that sounds... complicated, Grant has embraced parenthood.

"Everyone was right all these years, saying, 'Hugh, why don't you have some children? It changes your life'. Now that I have a child, it is life changing. I recommend it. Get some!" he said on The Ellen DeGeneres Show in 2012.

In 2018, he told Today he wishes he'd had children earlier.

"I should have done it before. I'm just lucky. I've got a great wife. I love her."

"It's just lovely to have all that love around," he reiterated in a People TV interview. "Suddenly you love someone more than yourself. It's unheard of in my case and they love you and it's all enchanting."

The phenomenon of Hollywood dads having children later in life is not new: Charlie Chaplin fathered 11 children, the last eight with his fourth wife Oona O'Neill who he married when he was 54, and she was 18.

Other famous faces who became fathers at older ages include Michael Douglas, 75, who has two children - a son born in August 2000 and a daughter born in April 2003 - with wife Catherine Zeta-Jones, 50.

I think I’ve been waiting for most of my 57 years for a birthday like yesterday. My wife and my son surprised me with an afternoon picnic on the beach—oh, what a lucky man I am. Thank you for all your birthday wishes, it’s sort of hard to celebrate anything with so many people hurting. So I’ll take all those wishes and send them back out into the world. I hope you’re all getting through as gracefully as possible. God bless, and may you all be safe, healthy, and happy. XO

In 2003 and at age 56, David Letterman started a family with his partner Regina Lasko, who gave birth to their son Harry.

Actor Kelsey Grammer, 65, has seven children. His oldest daughter Spencer is 36, and his youngest three with wife Kayte Walsh, 39, are eight, seven and three.

Clooney had long been Hollywood's most eligible bachelor before meeting Amal, an international human right's lawyer, in 2013.

On the red carpet prior to accepting his AFI Lifetime Achievement Award in 2018, Clooney shared that there isn't an award in the world that can compete with being a dad.

"It’s not really my achievement; it's much more our achievement and our luck. It's these two knuckleheads we have at home right now, because it is pretty magical and pretty fun. This is all really exciting, but it’s really fun being home," he said when asked about his biggest achievement.

Reply
Upvote
@simple simon So true!! It is likely they don’t have to contribute to household chores etc either and when they want a break they can pay for nanny. Not real world stuff, but it is great they are happy and enjoying fatherhood.
R
rush 2 years ago

Sally: "Charlie Chaplin had kids in his seventies!"
Harry: "Yeah, but he couldn't pick them up!"