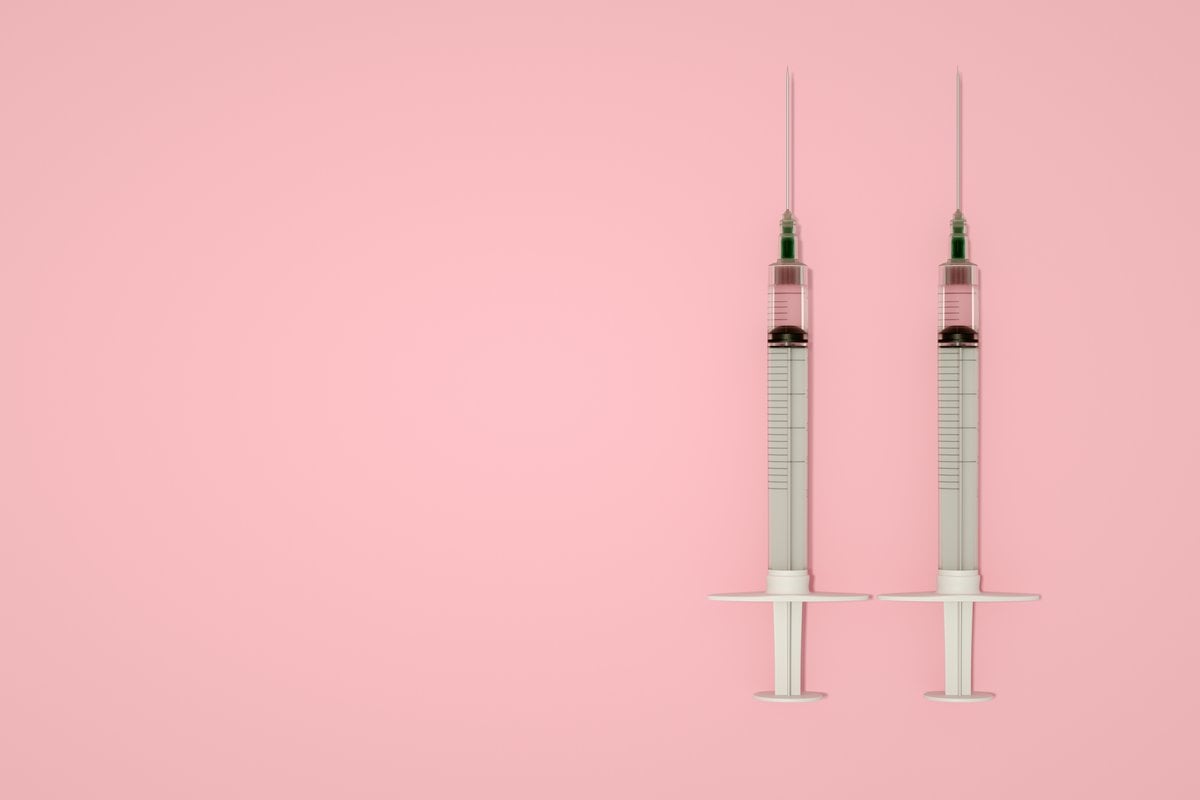 Since February, millions of Aussies have been rolling up their sleeves to get jabbed.

But as Australia hits 70 per cent double dose vaccination and restrictions start to ease around the country, many in the community still remain unvaccinated against COVID-19.

And while some may not be able to get the vaccine because of medical reasons or are too young, others find themselves in the anti-vax or vaccine hesitant camps.

So just how 'dangerous' are people who are unvaccinated?

Here's everything you need to know about those who are unvaccinated.

What medical risks do people who are unvaccinated pose?

Unvaccinated people not only pose a health risk to themselves, but they also risk spreading COVID-19 to the community, particularly the elderly and those who are medically vulnerable "who haven't been able to elicit a really good response to the vaccine."

Well, as Professor Marylouise McLaws, an epidemiologist with expertise in hospital infection and infectious disease control, pointed out, the COVID-19 vaccine "protects against death, severe infection and hospitalisation, but doesn't completely protect against acquiring infection."

"We need to adjust our thinking to think well, we will be protected against hospitalisation at about 96 per cent reduction and death as well... but vaccinated people with Pfizer and AstraZeneca can still acquire silent infection or symptomatic infection that's very mild and still pass it on," she told The Quicky.

A well-known case of this is General Colin Powell, a former US secretary of state, who died of complications from COVID-19 aged 84 this week, despite being vaccinated.

"Colin Powell is the person that everybody knows so he's a good example of the fact that you can be vaccinated and your antibody levels [and therefore] your protection levels drop. He may have been vaccinated earlier on prior to getting a booster at his elderly age, he may have acquired circulating infection from an unvaccinated person and succumb to the complications," said McLaws.

"And that's why it's our duty to get vaccinated to protect the elderly and protect those who should be close to getting a booster shot," she stressed. "We all have a responsibility of keeping everybody safe."

Listen to the full interview with Professor Marylouise McLaws and Dr Josh Roose on The Quicky. Post continues after podcast.

What other risks do unvaccinated people pose to the community?

While we know those who are unvaccinated are in the minority in Australia, thanks to some media outlets, social channels and online forums, their voices are still incredibly loud when it comes to conversations around vaccination.

"We've seen some really quite small minorities really having a disproportional impact on the media landscape, often through quite controversial messaging [and] these protests," Dr Josh Roose, Political Sociologist and Senior Research Fellow in Politics and Religion at the Institute for Citizenship and Globalisation at Deakin University, told The Quicky.

The problem here is, those who oppose mandatory vaccinations are seemingly grouped in with those who also oppose lockdowns, masks and other government mandates.

We saw this recently during violent protests in Melbourne, which started as trade union protests and quickly evolved into demonstrations for anti-vaxxers, conspiracy theorists and far right groups.

"Some trade unionists were upset that they considered the union to be pushing for mandatory vaccination and to be seen to be supporting that on building sites, [so] they showed up and protested outside the CFMEU," said Roose.

"And from there, it only took a matter of minutes, if not less, for the freedom movement protesters to pick up on that. And there is a broad amalgam of right-wing activists and far-right activists, anti-vaxxers QAnon conspiracy theorists and others [that decided] to come down and to join in and then broadcast that through their own what they call 'alternative media outlets'.

"And that grew from a couple of 100 angry trade unionists who were in the minority, through to several thousand people. From there, the momentum kicked off."

Roose says there's a number of core beliefs that draw these groups together.

"There's a strong distrust in government, there's a strong alignment with the sort of language that we've seen come out of the US in particular, the libertarian language about standing up to tyranny and freedom. And the idea that there's some sort of liberal elites who were controlling the mainstream media who are basically exploiting these lockdowns to enhance their power.

"And that resonates with some people who have been locked down for 18 months stuck at home who are seeing this on social media, they may well say, 'well, no one's listening to me, I feel a little bit disempowered or angry about this, I'm going to go and protest'.

"But there are active groups in particular, the far-right,... who are seeking to use this anger, and these displays of public dissent, to mobilise and to grow their movements. And that's where this is particularly problematic and dangerous."

There's also the problem of misinformation.

Just recently, those who oppose vaccine mandates falsified a court document to make it appear like Professor Christine McCartney from the National Centre for Immunisation Research and Surveillance, claimed that fully vaccinated people were 13 times more likely to catch COVID-19.

The document also stated that she said 'yes', when asked if the vaccine was dangerous for women who are pregnant, or that the vaccine had never been studied properly.

Melbourne's RMIT University found that the document had been falsified, and that the professor had actually spoken about how safe and effective the vaccines are.

However, those who never followed up and saw that those statements were found to be untrue, will still be led to believe that vaccines are unsafe and ineffective.

Read more: How to have a conversation with someone who is vaccine hesitant.

Reply
Upvote
7 upvotes
As a small business owner I am really struggling with one unvaccinated staff member. We cannot tell staff they need to be vaccinated without risking legal action under anti discrimination laws. I also have a vaccinated staff member who has a child under going chemo. I just wish the governments would back allowing small business to require vaccination unless medically exempt.
C
cat 2 months ago

Reply
Upvote
2 upvotes
@km  as an employer you can mandate it is there is a 'reasonable" need for OH&S reasons. The fact that one of your staff members has a vulnerable child would  absolutely make a vaccination mandate reasonable, I think anyone would be mad to challenge that legally.- but its always possible, of course. At the least you'd have every right to reduce their shifts so they are not in contact with the other employee.
S
sammyrk 2 months ago

Reply
Upvote
2 upvotes
@km just FYI, maybe look into discrimination laws on this. Discrimination laws in an employment sense protect individuals from being discriminated against on a number of protected attributes, such as gender, sexual preference, race etc. Vaccination status is not one of them, and early tests of these laws since vaccine mandates have come in have seen the courts support this. You can require your staff to be vaccinated if it is a reasonable direction to do so.
K
km 2 months ago

Reply
Upvote
3 upvotes
@sammyrk ...I have done some research, we are are Tier 3 business which makes it a grey area in terms of mandating vaccination. Unfortunatly small businesses can't take the risk, legally it could break a small business if we had to fight it in court. So far it has been big business with big pockets who have been testing the law successfully. Hopefully this will pave the way for small business, it would just be nice to have clear laws that meant we could do it without the risk.
A
ava 2 months ago