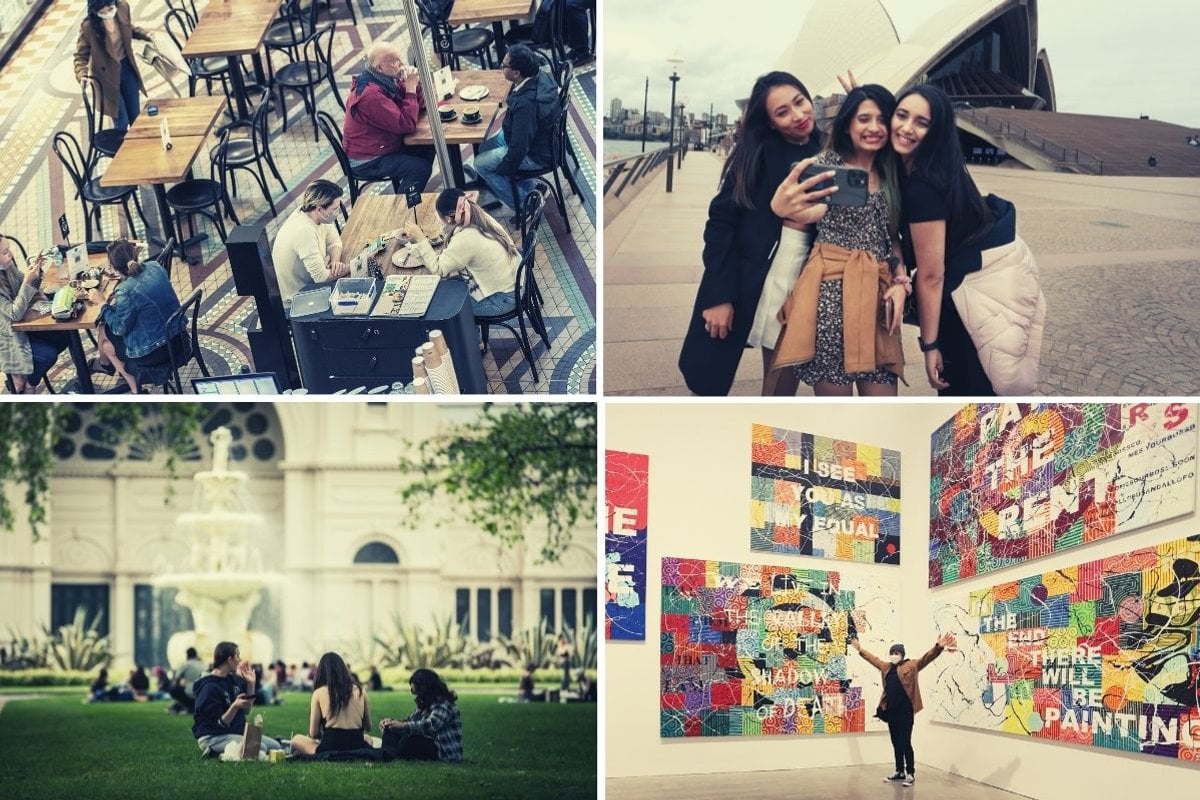 NSW is three days in to being Australia's 'living with COVID' guinea pig, as it races towards an 80 per cent double vaccination rate.

With the state opening up while still recording hundreds of new virus cases daily, all eyes are on what happens next.

How many people will get COVID?

Will the hospitals overflow?

Will the death toll climb?

Did they open too soon?

As a constituent of NSW myself, who has so far only ventured out to the gym after 15 weeks of lockdown in Sydney, I too have asked myself every one of those questions as I tentatively dip my double-jabbed toe back into society.

Watch: Things you never say in 2021. Post continues after video.

If we glance over at our overseas neighbours, there's some pretty confusing and concerning headlines about rising numbers despite high vaccination rates and it's hard to know where to look, what to believe, and how it all translates back to us down here in Australia.

Firstly, Australia's vaccination rates are based on the population aged 16 and over. NSW's double vax rate as a percentage of the entire population, is therefore around 62 per cent. The state's rate for 12 and over - the current population eligible for a jab - is 73 per cent, according to Covidlive.

Let's look at the UK, for example. On Monday they reported more than 40,000 new cases of COVID-19 for the first time since January.

67 per cent of their entire population, and 79 per cent of over 12s are fully vaccinated. Over the last seven days they've recorded 795 deaths.

But that's compared to daily deaths in the thousands the last time they were reporting that many infections. 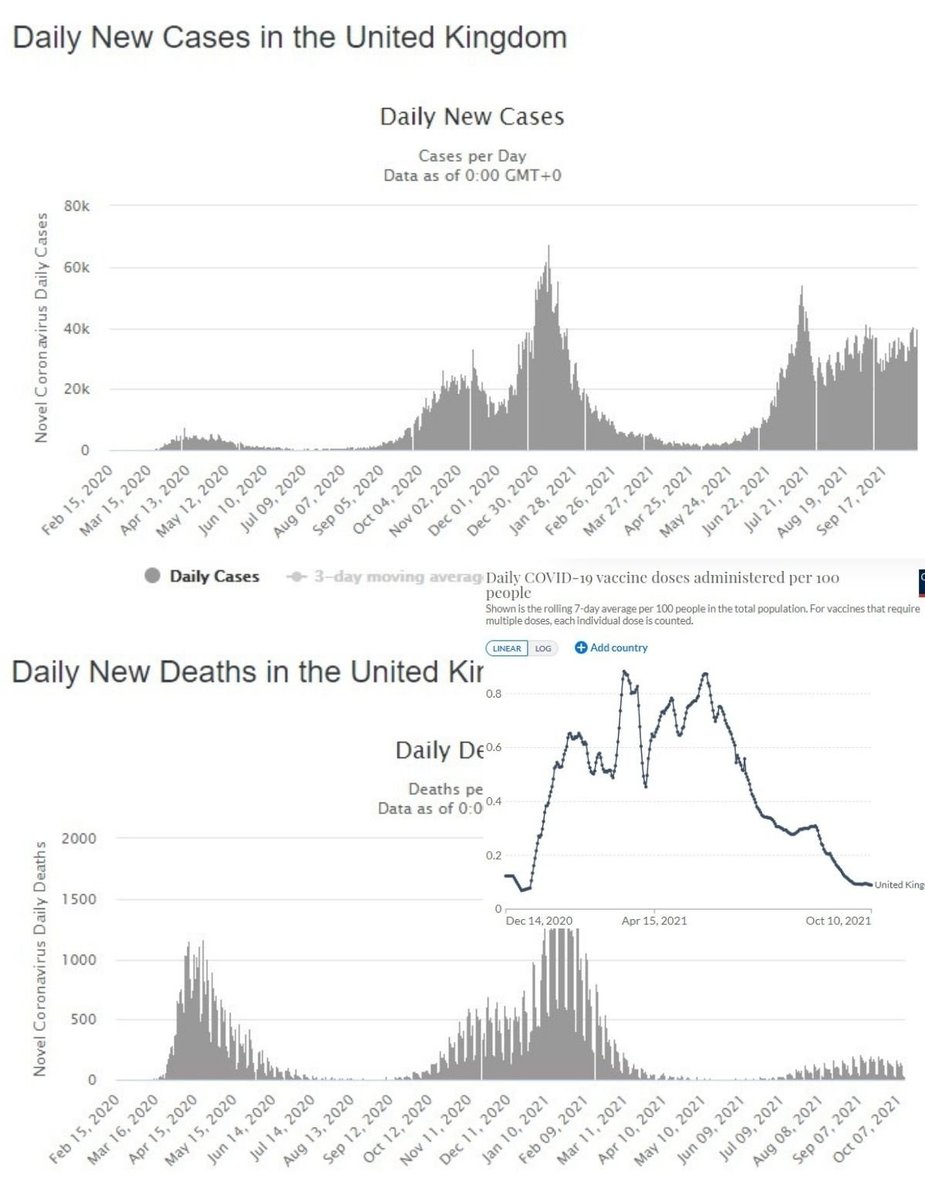 Cases, deaths and vaccination rates in the UK. Image: Worldometers/Our World in Data. 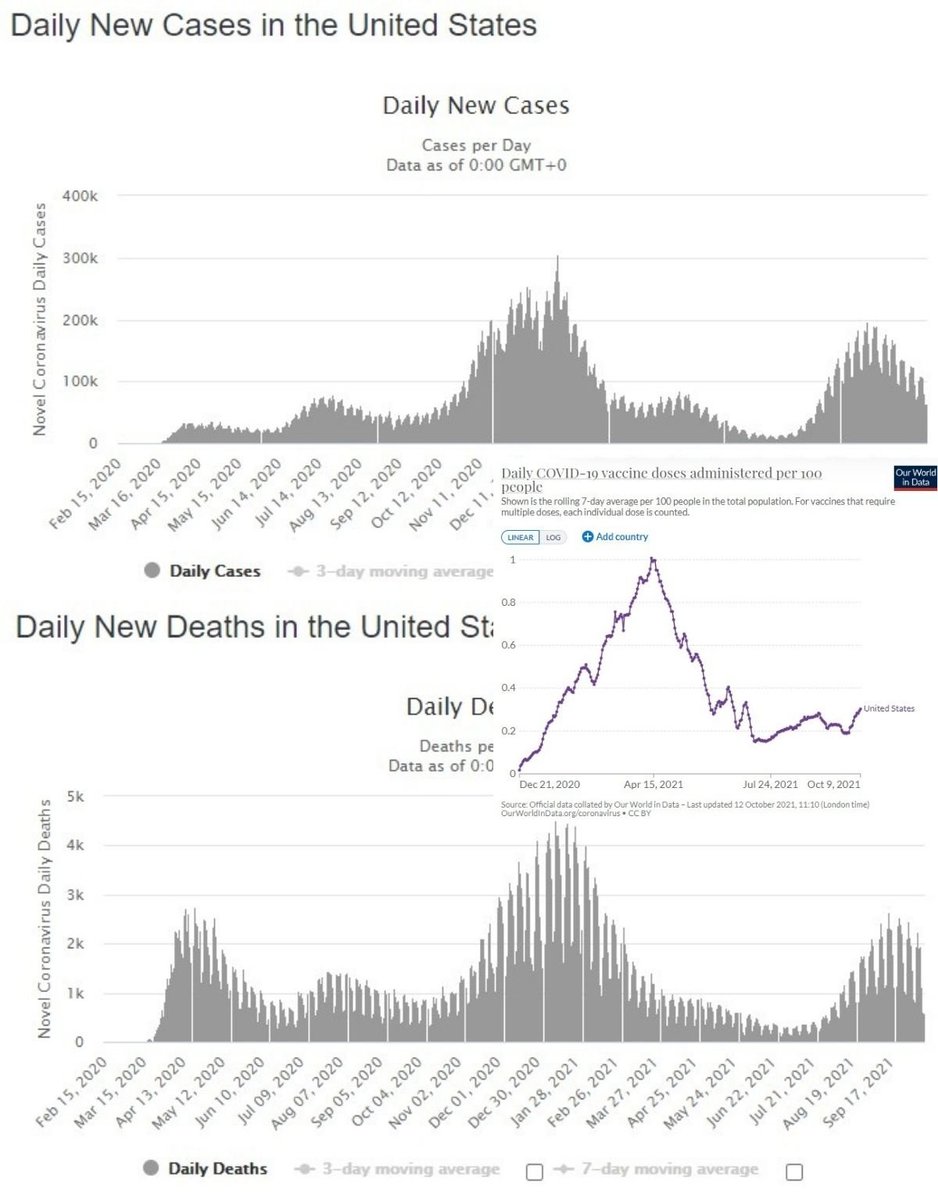 But it's hard to compare Australia to the likes of the UK and the US. They are far ahead of us in terms of case numbers and well behind us in vaccination rates.

Instead, we should be looking towards Singapore. It's not a perfect comparison either, their population is much more densely packed, and recently they have reintroduced some stricter restrictions after transitioning out of lockdown in August with the goal to live alongside the virus.

Like us, they've kept numbers and cases low for the majority of the past two years, which means they too don't have very high immunity within the population from the disease itself.

83 per cent of their entire population is double vaccinated with either Pfizer or Moderna, and over the weekend they recorded a daily high of 3700 new infections within their population of 5.6 million.

While the numbers sound high, it's important to look at the detail.

According to Singapore's Ministry of Health, 98.3 per cent of all local infected cases over the past 28 days were either asymptomatic or had mild symptoms.

“The vaccines don’t work- look at Singapore.” Alright, let’s do it.

Cases are at record highs due to Delta, however, OVER 98% of Singapore’s vaccinated cases are MILD or have NO symptoms. In addition, the nation has had VERY FEW deaths despite a surge in cases.

On Sunday they added nine new deaths, and have added similar numbers in the days since. But overall their death toll is still a very low 172 despite recording more than 1000 daily cases since September 18.

The occupancy rate for COVID-19 isolation beds in Singapore's hospitals has risen to 85 per cent in October, up from 62 per cent in July.

Again, that all sounds really troubling.

But Dean of the Saw Swee Hock School of Public Health Teo Yik-Ying has told CNBC, "Hospital beds are filling up because of the country's very cautious approach, and not because that many people need acute medical care."

Singapore Prime Minister Lee Hsien Loong has described the country's transition from pursuing COVID zero to 'living with COVID' as "not a smooth and easy journey."

We knew this wasn't going to be easy.

It's not a case of ditching restrictions forever once we hit certain vaccination targets and that's that. It's why all of our governments in Australia are opting for staged approaches.

NSW, and soon Victoria, will see spikes in their case numbers, and subsequently deaths, as a result of opening back up this month. But with 70-80 per cent of their populations vaccinated, Singapore's statistics show us that the vast majority should only experience mild symptoms.

As Sydney GP Dr Brad McKay told Mamamia, "No one is immune. We will all either get vaccinated or get COVID-19. Some of us will still get COVID-19 after being vaccinated, but at least it will give your immune system a fighting chance against a potentially lethal virus."

While Singapore is currently only allowing gatherings of two people compared to NSW letting ten people dine in a group, Doherty Institute epidemiologist Katherine Gibney has told the ABC, "There has been some loosening or bringing forward of the restrictions, [but] I don't think that it will have too major an effect."

Tired of lockdown? A recent analysis by members of the Doherty Institute modelling consortium has shown that our resilience, adaptability and willingness to adhere to the rules, has helped suppress #COVID. @ConversationEDU @UniMelbMDHS @TheRMH https://t.co/s01CGP8Le2 pic.twitter.com/afL8eqdTMu

It's understandable to be anxious as we make this transition to a new COVID normal.

As with everything related to this virus, it's hard to predict exactly what's going to unfold. Singapore's approach does, however, give us an idea of what to expect.

Remaining cautious, socially distanced and masked is still of the upmost importance in the coming months.

But as our states start to open up, we do need to learn to live with this virus.

ACT is leading the way. They're on track to become the most COVID vaccinated place in the world with at least one dose in 98.5 per cent of all Canberrans aged over 12.

Let's get all the other states and territories following suit.

Gemma Bath is a constituent of NSW and writer at Mamamia. You can keep up to date with her articles here, or follow her on Instagram,  @gembath.