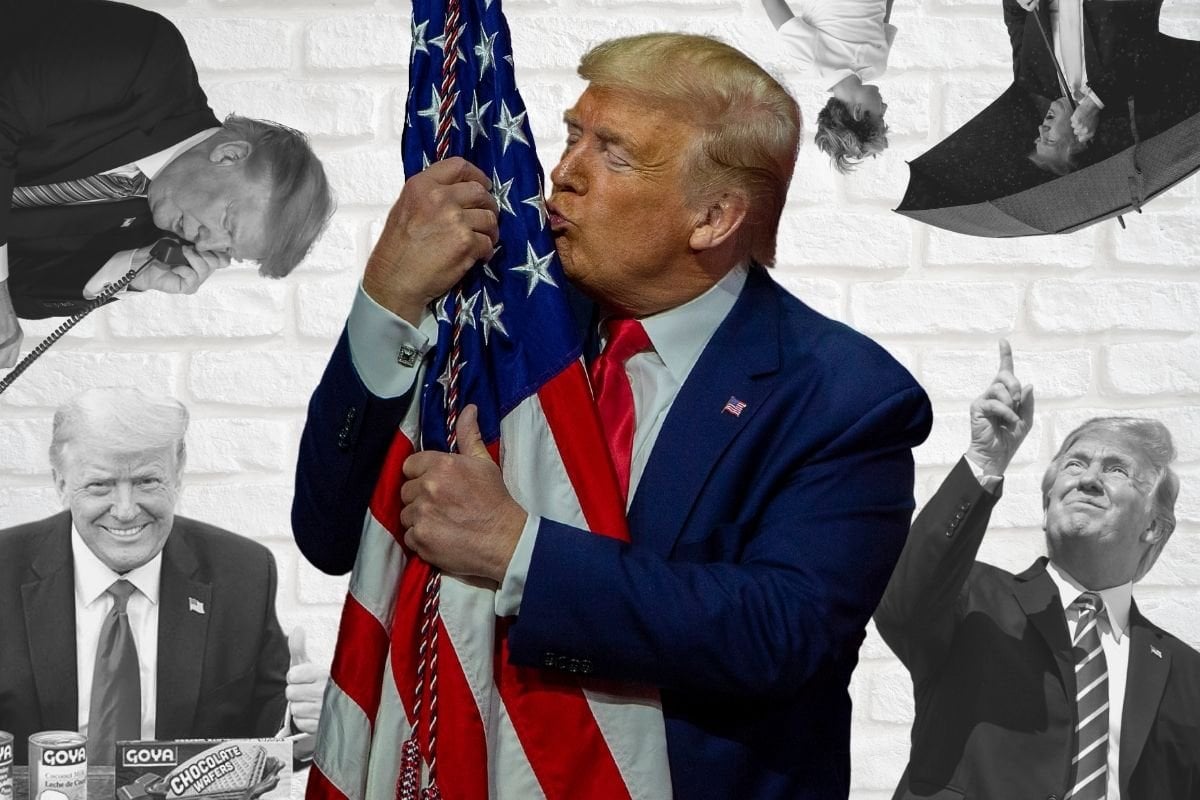 1454 days. That's how long Donald Trump has held the most powerful office in the world.

And six. That's how many he's got left.

As the former television personality begins emptying the drawers of the Resolute Desk, tweaking his CV and swiping the White House stationery, it seems like a pertinent moment for the rest of us to ponder his legacy.

The Democrats have the serious stuff covered. You know, impeaching him for inciting a horde of loyal supporters to wage a violent insurrection on the US Capitol following his resounding election loss. etc.

But what of the little things, the oddities and absurdities that became a hallmark of the 45th president's time in office?

American journalist Jules Suzdaltsev has invited us all to reflect on — as he so deftly put it — "the weirdest and dumbest shit our failed dictator did in the last four years". i.e. The peccadillos we once marvelled over, before they were buried beneath whichever more-serious violation/scandal/crisis/crime happened to follow.

Here are some of Suzdaltsev's suggestions, plus a few others, in a very particular order.

12. That time he invited the championship-winning college football team to the White House and served them a feast of... Maccas.

CATERING AN ALL MCDONALDS DINNER BECAUSE HE CAUSE A GOVERNMENT SHUTDOWN AND THERE WAS NOBODY TO COOK FOOD AT THE WHITE HOUSE pic.twitter.com/LYtd0XrThy

11. That time he hogged the umbrella.

The film opens... It's January 2018. Palm Beach, Florida. It's raining. The president of the United States boards Air Force One amid a downpour and strong winds, sheltering himself beneath a large umbrella. His wife and 11-year-old son walk behind. They have no umbrella. They are wet. End scene.

8. That time he lied about being praised by Boy Scouts.

In 2017, after delivering a speech at the Boy Scouts' national jamboree, Trump told The Wall Street Journal that he received a call from "the head of Boy Scouts" who declared the president's address to be "the greatest speech that was ever made to them."

In a statement, the organisation replied, "We are unaware of any such call."

7. That time he declared a hurricane to be wet.

In September 2018, the president delivered his analysis of Hurricane Florence — a category 4 storm that caused widespread flooding and killed at least 24 people in North and South Carolina.

Speaking to press gathered on the White House lawn, he said, it's "one of the wettest we’ve ever seen, from the standpoint of water."

Donald Trump calls Hurricane Florence: 'one of the wettest we've ever seen from the standpoint of water' pic.twitter.com/iPpssBDdqV

Honourable mention: that time he reportedly asked members of the National Security Council if they could nuke hurricanes to stop them making landfall in the US: "we drop a bomb inside the eye of the hurricane and it disrupts it," he suggested, according to Axios.

6. That time he did some colouring in, and got it wrong.

OUTRAGEOUSLY BAD AT COLORING IN THE UNITED STATES FLAG pic.twitter.com/cDMXyFUjw4

5. That time he became a beanfluencer.

HOCKIN’ BEANS DURING A PANDEMIC pic.twitter.com/l0NuunMdDb

Ah, yes. This whole saga started when Robert Unanue, the CEO of major company Goya Foods visited the White House and declared, "we’re all truly blessed... to have a leader like President Trump".

The president's critics revolted, urging consumers to boycott the brand. So what did Trump do? Give Unanue a helping hand by posing with a bunch of beans, chocolate wafer bikkies and other packaged Goya goods in the Oval Office.

Was it a (delicious) breach of the US Department of Justice's Misuse of Position and Government Resources guidelines? Almost certainly. Was action taken? Ha. You're cute.

4. That time he ruined Santa for a young child. 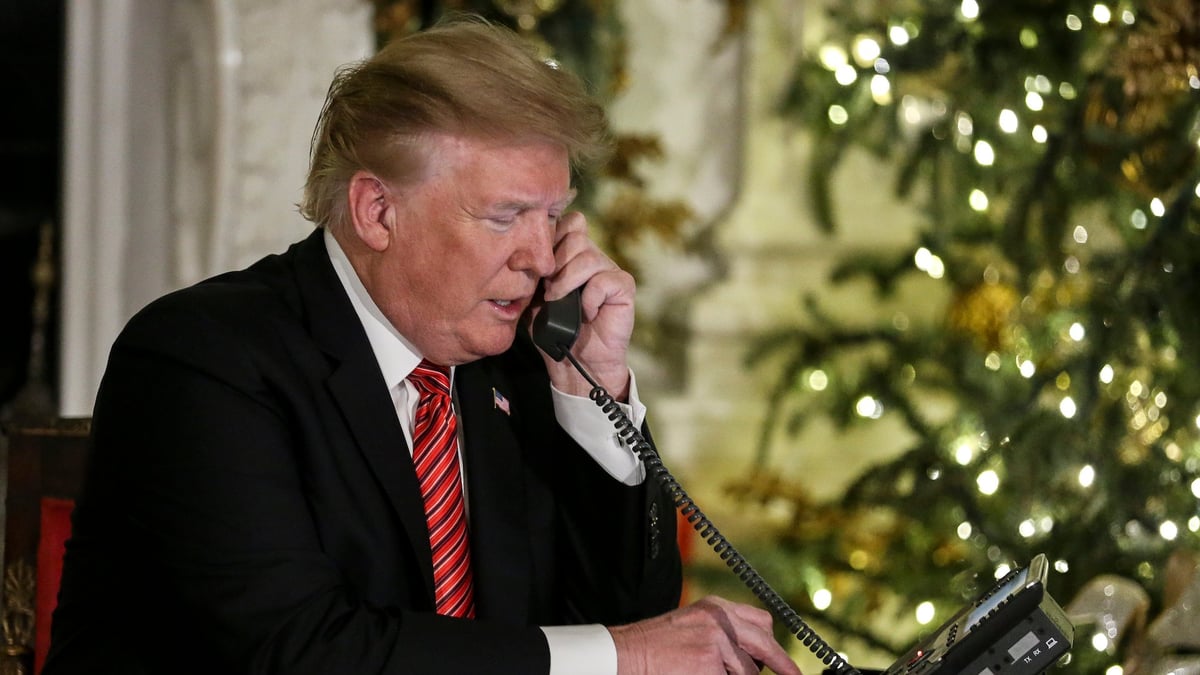 During his for-the-camera Christmas calls with the public in 2018, Trump asked a seven-year-old named Coleman: "Are you still a believer in Santa?"

The president listened for a while before adding: "Because at seven, it’s marginal, right?"

3. That time he signed actual Bibles.

What do you get when you cross an inflated sense of self-importance with a position of immense power? A bloke who autographs the Bible.

In 2019, the president lifted the spirits of his supporters in tornado-ravaged Alabama by signing their copies of the Good Book. Theologians and religious leaders were divided on whether the move was blasphemous. It was certainly... something.

2. That time he theorised about injecting COVID-positive people with disinfectant.

During a COVID-19 media conference in April 2020, President Trump reflected on a study that showed bleach and isopropyl alcohol could kill the virus in a matter of just a few minutes.

His interpretation was... interesting. No, scrap that. Dangerous. It was dangerous.

"Disinfectant knocks it out, in a minute. And is there a way we can do something like that by injection inside or almost a cleaning?" he said, turning to White House Coronavirus response coordinator, Dr Deborah Birx. "As you see, it gets on the lungs and does a tremendous number on the lungs, so it would be interesting to check that. So that you're going to have to use medical doctors. But it sounds interesting to me."

1. That time he stared directly at a solar eclipse.

This 2017 moment was in top spot on Suzdaltsev's list — a "classic", he called it. And no wonder.

May we present the man with the US' nuclear codes squinting, barefaced, at the sun during a solar eclipse. As the rest of us, including his wife Melania, seem to know, the number one rule of eclipse-viewing is: use protective eyewear.

To be fair. We know Trump doesn't like following orders. Especially not the one he's going to hear on January 20.

Reply
Upvote
6 upvotes
The men here still defending Trump.... it would be funny if it wasn’t so sad.
<
<deleted> a year ago

Reply
Upvote
1 upvotes
@laura__palmer how do they compare with the  people here literally lying about him?
L
laura__palmer a year ago

Reply
Upvote
1 upvotes
@snorks haven’t seen anyone really lying, but not even close to those still defending the orange clown. It’s literally laughable to even try
C
cat a year ago