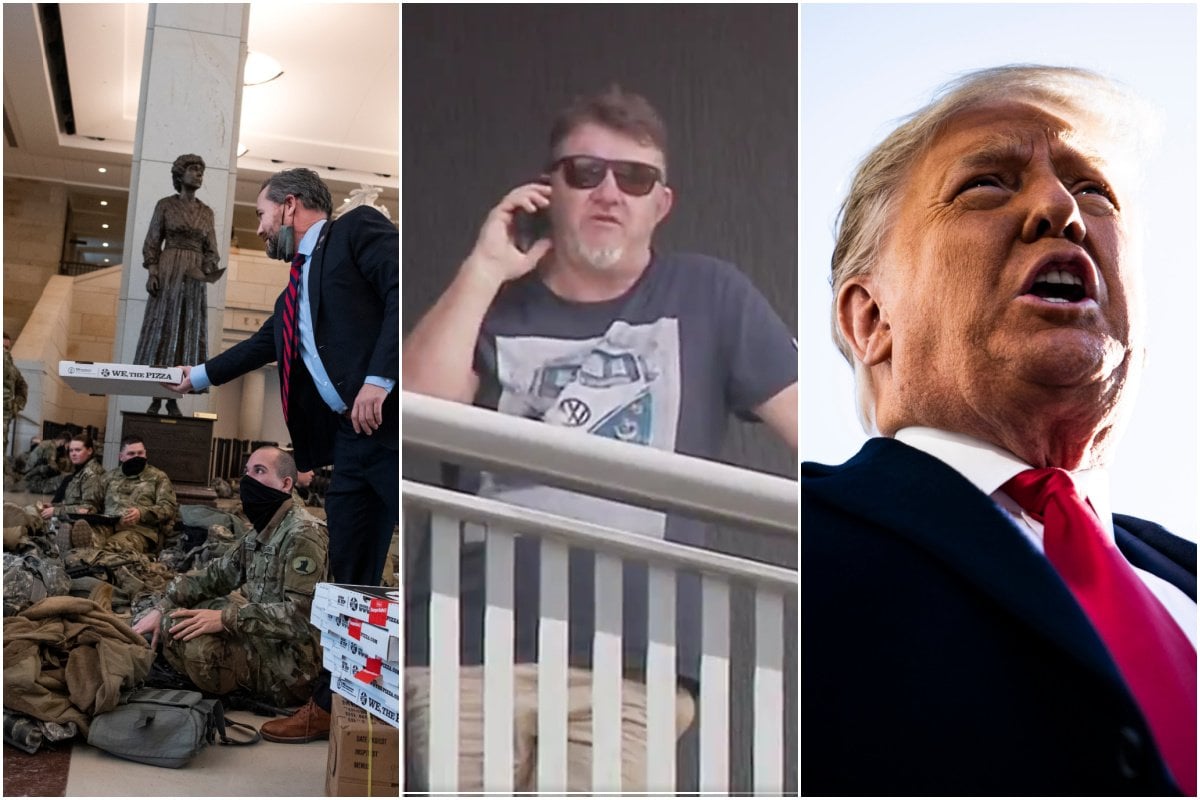 Donald Trump has become the first US President to be impeached twice.

Donald Trump has been impeached by the United States House of Representatives, for the second time in his presidency.

Earlier in the day, House Speaker Nancy Pelosi started the House debate over the article of impeachment against President Trump by saying that Trump is "a clear and present danger" to the country.

"The resolution is adopted."

"We know that the President of the United States incited this insurrection, this armed rebellion against our common country. He must go, he is a clear and present danger to the nation that we all love," Ms Pelosi said.

She has not yet said publicly when the House will send the article over to the Senate, according to ABC News.

But it appears unlikely the extraordinarily swift impeachment would lead to Trump's ousting before the Republican president's four-year term ends.

The Senate's Republican majority leader, Mitch McConnell, rejected Democratic calls to convene the Senate in an emergency session to begin an immediate impeachment trial, according to a spokesman.

The earliest day the trial could start is January 19 - the day before President-elect Joe Biden's inauguration. 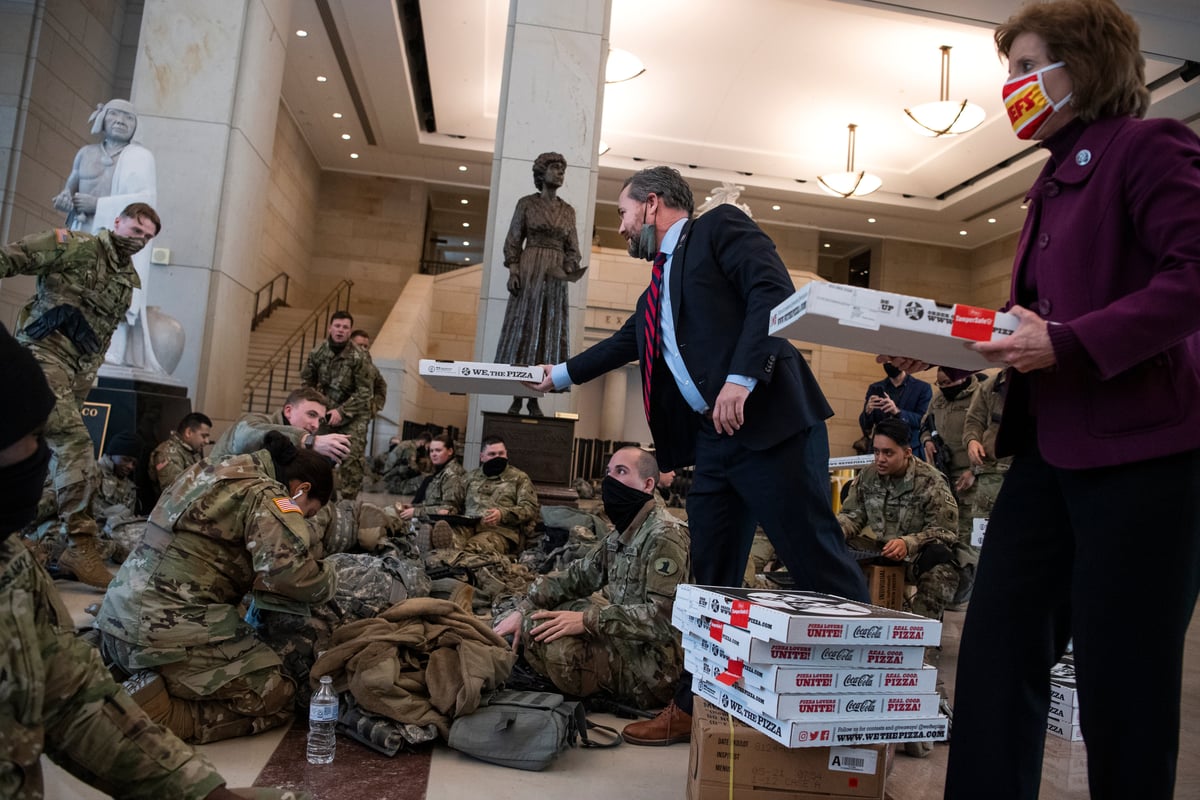 No US president has been removed from office through impeachment. Three - Trump in 2019, Bill Clinton in 1998 and Andrew Johnson in 1868 - previously were impeached by the House but acquitted by the Senate.

Under the US Constitution, impeachment in the House triggers a trial in the Senate. A two-thirds majority would be needed to convict and remove Trump, meaning at least 17 Republicans in the 100-member chamber would have to join the Democrats.

The impeachment article cites the 14th amendment to the US constitution, which prohibits anyone who has "engaged in insurrection or rebellion against the US government" from holding "any office", as lawmakers attempt to not just eject him from the White House, but prevent him from ever occupying it again.

The House previously voted to impeach Trump in December 2019 on charges of abuse of power and obstruction of Congress stemming from his request that Ukraine investigate Biden and his son Hunter ahead of the election, as Democrats accused him of soliciting foreign interference to smear a domestic political rival. The Senate in February 2020 voted to keep Trump in office.

Incredible photos have emerged from inside the Capitol, as National Guard troops spent the night sleeping on marble floors in an effort to keep lawmakers safe from another attack.

Reinforcements have arrived in the Capitol ahead of today’s impeachment vote and for inauguration week. All quiet for now.

While some GOP House members complain about having to walk through metal detectors, National Guard troops spent night sleeping on marble floors of the Capitol. pic.twitter.com/7odvIkoBOQ

The number of people arrested on criminal charges related to last week's riot at the US Capitol has exceeded 100.

Queensland Premier Annastacia Palaszczuk has called for a review of Australia's quarantine system after a cluster of the deadly UK coronavirus strain emerged in a Brisbane hotel.

The Grand Chancellor Hotel has been shut for deep cleaning after four people quarantining there, a cleaner and her partner contracted the COVID-19 strain.

All 129 people quarantining there are being tested and moved to another hotel to restart 14-day isolation.

The 226 people who worked at the hotel and 250 who have quarantined there since December 30 will also be isolated and tested.

Queensland is on the brink of a hotel quarantine nightmare, with the UK super-strain of COVID-19 continuing to spread through Brisbane's Grand Chancellor. | @JohnpaulGonzo pic.twitter.com/uELB5nKE3u

Ms Palaszczuk said the handling of arrivals and suitability of quarantine hotels must be reassessed.

The total number of active Queensland virus cases is 26.

Greater Sydney restrictions "not likely to ease" in coming days.

Chief Health Officer Dr Kerry Chant says it's unlikely coronavirus restrictions across Greater Sydney would be eased in the coming days, with authorities needing at least another three weeks to ensure the Berala and northern beaches clusters are squashed.

"It would take at least three, maybe four weeks and so I need the community to be on track with us," Dr Chant told reporters on Wednesday.

"As an epidemiologist, we like to see around two incubation periods before we assess that we are free of the disease."

NSW recorded one new locally-acquired COVID-19 case in the 24 hours to 8pm on Tuesday, in a child connected to the 28-person Berala cluster.

Premier Gladys Berejiklian on Wednesday also confirmed a COVID-positive man, who presented to Mount Druitt Hospital last weekend with respiratory symptoms, and his partner are linked to the Berala cluster.

Public health alerts remain in place for dozens of hotspots around Greater Sydney, including a shopping centre in Warriewood, a post office in Hurlstone Park and a workers' club in Blacktown.

Meanwhile, South Australia has lifted COVID-19 restrictions for travellers from regional NSW, but will continue to block visitors from Sydney and surrounds.

Three people have drowned in Victorian waters in 24 hours.

Three people have died in separate incidents on Victoria's Mornington Peninsula and South Gippsland coast, with a three-year-old fighting for life after an emergency in Melbourne.

In one incident, four people were swept off rocks at Bushrangers Bay near Cape Schanck, close to the southern-most point of the Peninsula, about 3.30pm on Wednesday.

One woman died and five other people were rescued.

Three people have died and more are fighting for life in hospital after a horror 24 hours on Victorian waters. @ChristineAhern #9Today pic.twitter.com/gpSt8YuH57

The second death was a man aged in his 80s who was pulled from water unconscious at the Rye front beach in Tootgarook on Wednesday afternoon.

A third suspected drowning happened on Wednesday night at Venus Bay in Gippsland after a woman in her 20s attempted to rescue a teenage girl.

Further east another emergency was unfolding at a Narre Warren lake, with a three-year-old girl found unresponsive in the water at about 5:50pm. She is in a critical condition.

Second year of pandemic "may be tougher".

The second year of the COVID-19 pandemic may be tougher than the first given how the new coronavirus is spreading, especially in the northern hemisphere as more-infectious variants circulate, the World Health Organisation says.

"Going into a second year of this could even be tougher given some of the transmission dynamics," the WHO's Mike Ryan said during an event on social media.

The WHO, in its latest epidemiological update issued overnight, said that after two weeks of fewer cases being reported, five million new cases were reported last week.

"After the holidays, in some countries the situation will get a lot worse before it gets better," said Maria Van Kerkhove, WHO's technical lead for COVID-19.

Boris Johnson told MPs on Wednesday Health Secretary Matt Hancock will unveil the plans "in due course" however there was a delay with the roll-out of the centres because of the supply of the vaccines.

The British government has said it plans to offer each person in its top four vulnerable groups - including care home residents and people aged 80 and over - and health workers a vaccine by February 15.

It has not given a target number of vaccines, however a report from the London School of Hygiene and Tropical Medicine said 2 million people in England need to be given jabs each week, alongside a lockdown in January, to prevent intensive care units in hospitals becoming overwhelmed in the future.

According to the latest figures from the government, a total of 2.4 million people have received a jab in the UK so far.

The UK on Wednesday reported 1564 new deaths within 28 days of a positive test from COVID-19, a record daily toll, with another 47,525 additional cases.

Japan has expanded a state of emergency declared for the Tokyo area to seven more prefectures, with a senior government adviser adding it is uncertain whether the Olympics can go ahead due to the coronavirus pandemic.

Amid a steady rise in COVID-19 cases, the governors of Osaka, Kyoto and other hard-hit prefectures requested the government to announce the emergency, which gives local authorities the legal basis to place restrictions on residents' movements and businesses.

Prime Minister Yoshihide Suga has been wary about taking measures that would hamper economic activity, while he has put on a brave face against the mounting challenges of hosting the delayed Olympics in Tokyo this year.

As infections hover at record levels, straining the country's medical system, opinion polls have shown a public increasingly opposed to holding the Summer Games in July and growing frustration with Suga.

The US government has executed convicted murderer Lisa Montgomery, the only woman on federal death row, after the Supreme Court cleared the last hurdle for her execution by overturning a stay.

Montgomery's execution marked the first time the US government has implemented the death sentence for a female prisoner since 1953.

Challenges were fought across multiple federal courts on whether to allow the execution of Montgomery, 52, on mental health grounds.

Her lawyers had argued she was a mentally ill victim of abuse who deserved mercy - her victim's community said otherwisehttps://t.co/87b7XTtMk1

"No one can credibly dispute Mrs. Montgomery's longstanding debilitating mental disease - diagnosed and treated for the first time by the Bureau of Prisons' own doctors," Henry said in a statement.

Montgomery was convicted in 2007 in Missouri for kidnapping and strangling Bobbie Jo Stinnett, then eight months pregnant. Montgomery cut Stinnett's fetus from the womb. The child survived.

- US coronavirus deaths have hit another daily high at more than 4300, with fatalities overall eclipsing 380,000.

- China has posted its biggest daily jump in COVID cases in five months, with four cities and 28 million people now in lockdown.

- A Sydney man who was seriously ill with advanced melanoma has made a remarkable recovery after receiving a drug reserved for breast and ovarian cancer, prompting a new clinical trial.

Reply
Upvote
3 upvotes
Read a comment a while ago that rang so true to me at the time, when someone who had suffered domestic abuse called out Trump's behaviour as being exactly the same. I think the analogy has only grown more powerful since: the US found the courage to leave him on Nov 3rd, and he's raged and become violent, while continuing to deny any responsibility on his own part.
cat 3 months ago

Reply
Upvote
1 upvotes
@david s he’s the absolute master of gaslighting people, even his fans were completely confused that he promised to come to the Capitol with them then turned around and told everyone he didn’t endorse the violence. He might be the most effective cult leader since Jim Jones.
3 months ago