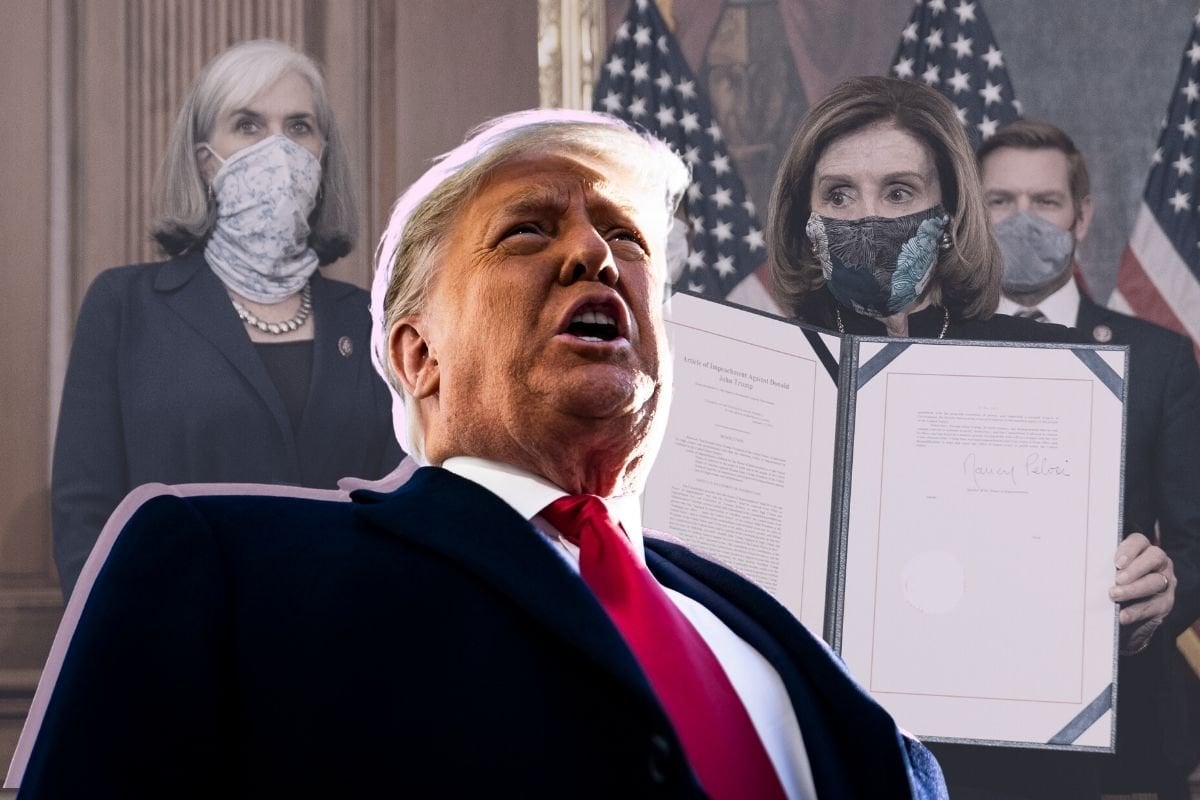 US President Donald Trump has become the first American president in history to be impeached twice.

The US House of Representatives have voted to formally charge him with inciting an insurrection just a week after a violent mob of his supporters stormed the Capitol as Congress met to formally count the votes cast by the Electoral College and affirm Joe Biden's win.

The House on Wednesday voted 232-197 to impeach Trump, with 10 Republicans joining with Democrats.

"The president of the United States incited this insurrection, this armed rebellion against our common country," House Speaker Nancy Pelosi, a Democrat, said on the House floor before the vote. "He must go. He is a clear and present danger to the nation that we all love."

During his speech mere hours before the riot, Trump repeated false claims that the election was fraudulent and exhorted supporters to march on the Capitol.

Five people died, offices were looted, and lawmakers were forced to wear gas masks and escape via underground tunnels. 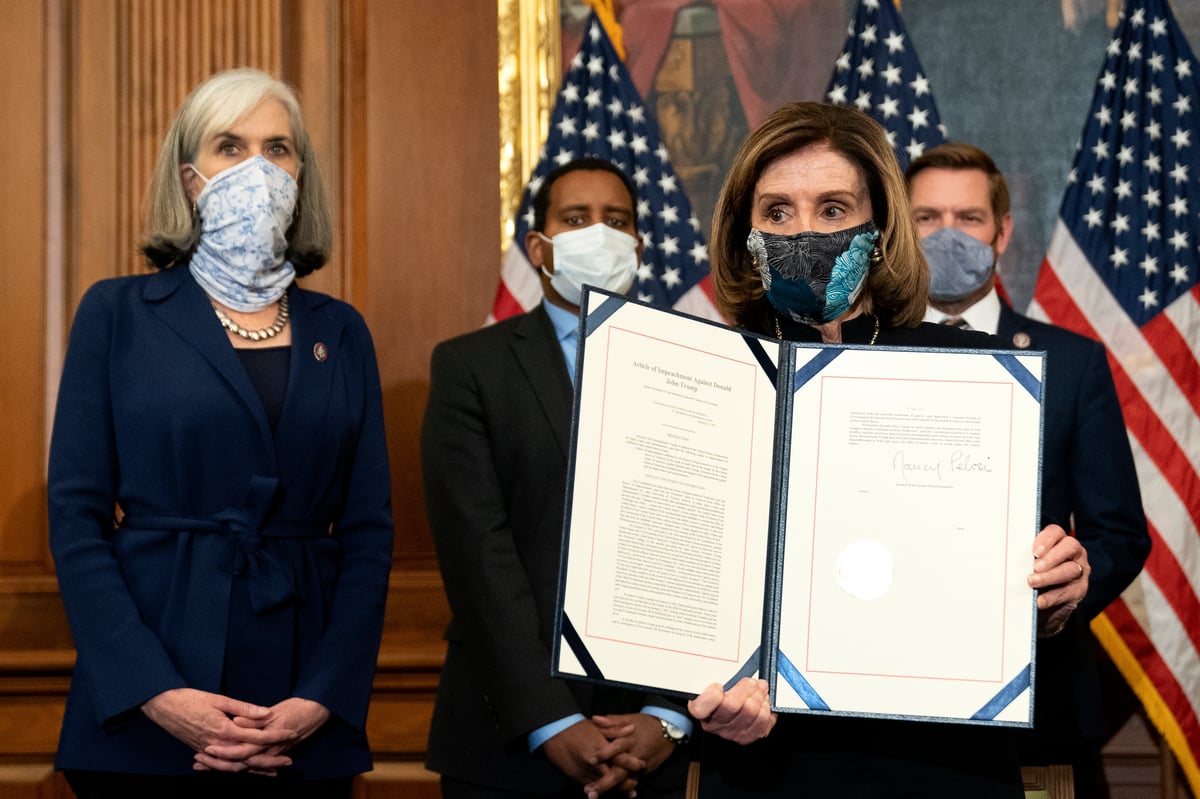 Speaker of the House Nancy Pelosi displays a signed article of impeachment against President Donald Trump, after Vice President Mike Pence declined to use the 25th amendment to remove him from office. Image: Stefani Reynolds/Getty

No US president has been removed from office through impeachment. Three - Trump in 2019, Bill Clinton in 1998 and Andrew Johnson in 1868 - previously were impeached by the House but acquitted by the Senate.

Under the US Constitution, impeachment in the House triggers a trial in the Senate. A two-thirds majority would be needed to convict and remove Trump, meaning at least 17 Republicans in the 100-member chamber would have to join the Democrats.

The Senate's Republican majority leader, Mitch McConnell, rejected Democratic calls to convene the Senate in an emergency session to begin an immediate impeachment trial, according to a spokesman.

That means a trial can't begin until the Senate is scheduled to be back in regular session on January 19, one day before Biden's inauguration.

But the trial will proceed in the Senate even after Trump leaves office.

Getting from Trump’s misdeed to impeachment proceedings in the House took 86 days in 2019. It’s going to take just a week in 2021.

If convicted, what does this mean for Donald Trump?

If a sitting president is convicted, they are immediately removed from office. But given Trump will have already likely finished his term, the Senate can additionally vote to remove his right to run for a second presidential term.

A conviction might also disqualify him from the benefits given to former presidents in the Post Presidents Act, including a pension, a yearly travel allowance, and funding for an office and staff.

He would still be entitled to Secret Service protection, but Congress could amend the law to make sure Trump loses those benefits.

Remind me, what was he impeached for the first time and what happened?

The House previously voted to impeach Trump in December 2019 on charges of abuse of power and obstruction of Congress stemming from his request that Ukraine investigate Biden and his son Hunter ahead of the election, as Democrats accused him of soliciting foreign interference to smear a domestic political rival.

The Senate in February 2020 voted to keep Trump in office.

What is Trump's reaction?

Donald Trump has in recent days been stripped of his usual communication methods, namely Twitter, so the president's immediate response to his second impeachment was not heard.

However, he has now released a video, in which he didn't mention the impeachment at all, choosing instead to call for "calm."

"I want to be very clear, I unequivocally condemn the violence that we saw last week. Mob violence goes against everything I believe in and everything our movement stands for. No true supporter of mine could ever endorse political violence," he said.

President Trump in a video message did not acknowledge his second impeachment, but instead called for peace and claimed that those who mobbed the US Capitol last week are not his “true” supporters https://t.co/bXwOSzSz9p pic.twitter.com/xsh75joG7g

A senior Trump advisor has told CNN, President Trump is yet to grasp the magnitude of the damage being done to his standing in American history, and is "clueless what any of this means internationally or historically."

Ok, so what is everyone else saying?

In a break from standard procedure, Republican House leaders refrained from urging their members to vote against impeachment, calling the vote a matter of individual conscience.

Among the 10 Republicans who backed impeachment was Republican Jamie Herrera Beutler who said, "I am not choosing a side, I'm choosing truth. It's the only way to defeat fear."

Republican David Cicilline said, "I think it is important for people around the country and around the world to see Congress respond swiftly to this attack on our democracy."

Ten Republicans joined Democrats in the historic vote to impeach President Trump for a second time — a contrast to the first impeachment vote, when every House Republican voted against both articles of impeachment.

The House's top Republican Kevin McCarthy said, "Impeaching the president in such a short time frame would be a mistake. That doesn't mean the president is free from fault. The president bears responsibility for Wednesday's attack on Congress by mob rioters."

House Rules Committee chair, Democrat Jim McGovern said, "We are debating this historic measure at an actual crime scene and we wouldn’t be here if it weren’t for the president of the United States. This was a well-organised attack on our country that was incited by Donald Trump. If this is not an impeachable offense, I don’t know what the hell is."

President-elect Joe Biden is yet to comment, but on Friday strongly indicated he does not back moves to impeach President Donald Trump, saying the quickest way to get him out of office is through his transition to power.

"What actually happens before or after, that is a judgment for the Congress to make. But that's what I am looking forward to: him leaving office," he added.

Celebrities are also starting to react, here's what they are saying:

Trump will have the legacy of doing a really great job of getting impeached. Better than any other president. That’s a perfect biggley accomplishment!

I didn’t even know you could be impeached twice. I thought it was like dying