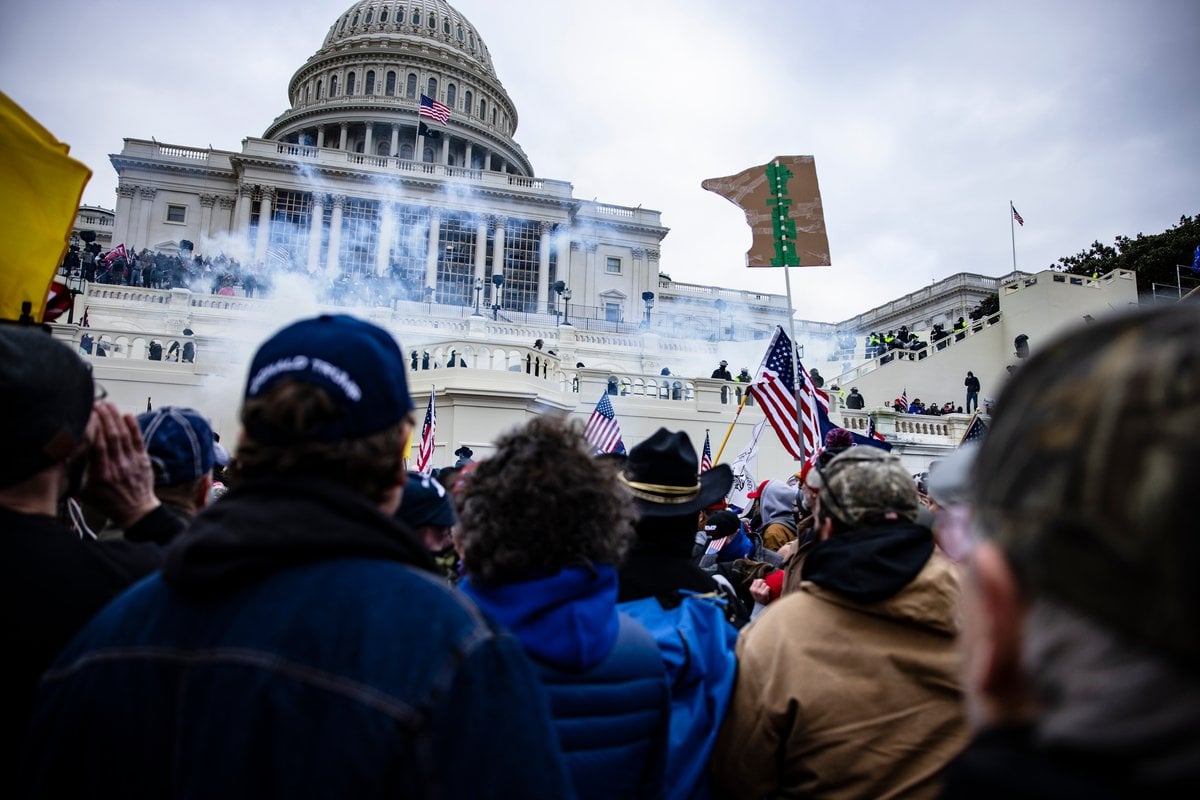 What ought to have been the next step in American democracy, instead descended into anarchy.

Dozens of supporters of outgoing Republican President Donald Trump stormed the US Capitol building overnight to disrupt the confirmation of Democrat Joe Biden as the next president of the United States.

A joint session of Congress had been debating a last-ditch effort by pro-Trump lawmakers to challenge the results, when the mob breached security and swarmed throughout the building.

The chambers were locked down, and Members of Congress were issued gas masks and told to shelter, while key leaders — including Vice President-Elect Kamala Harris — were evacuated to safety. 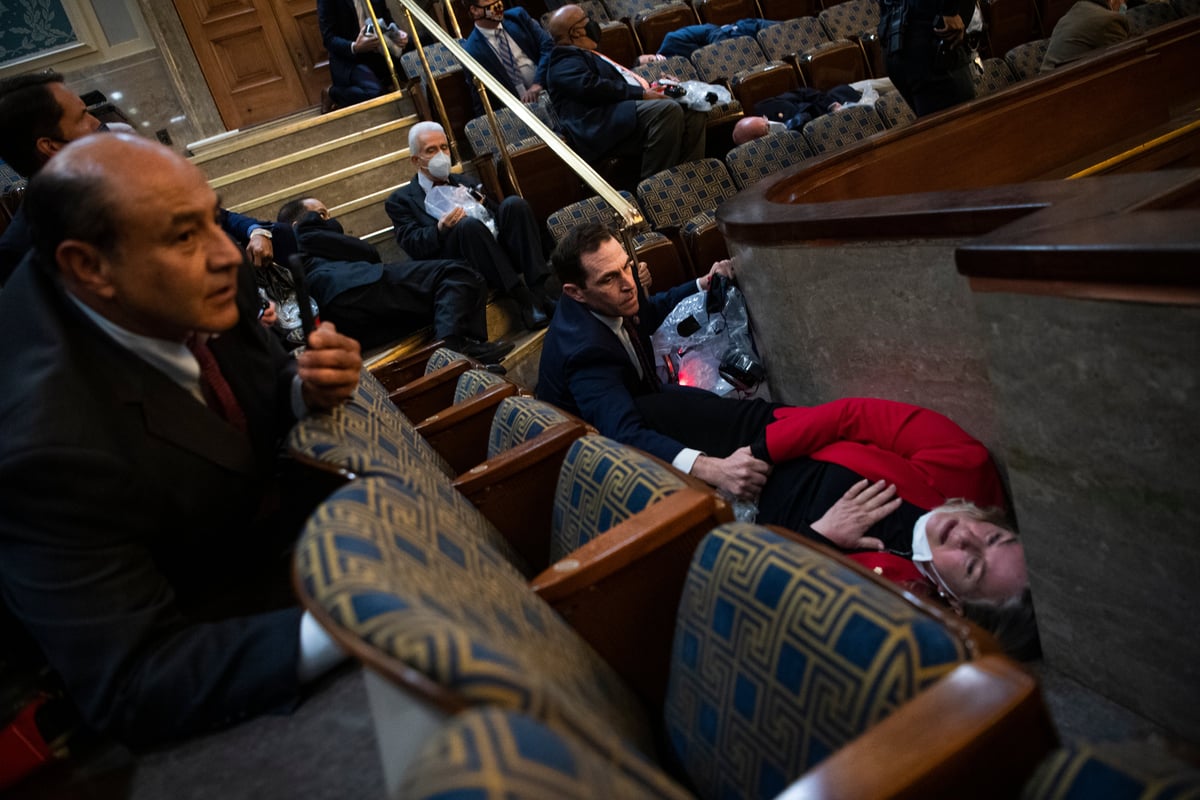 Images show security in the House of Representatives with guns raised toward the door in an effort to protect those within. 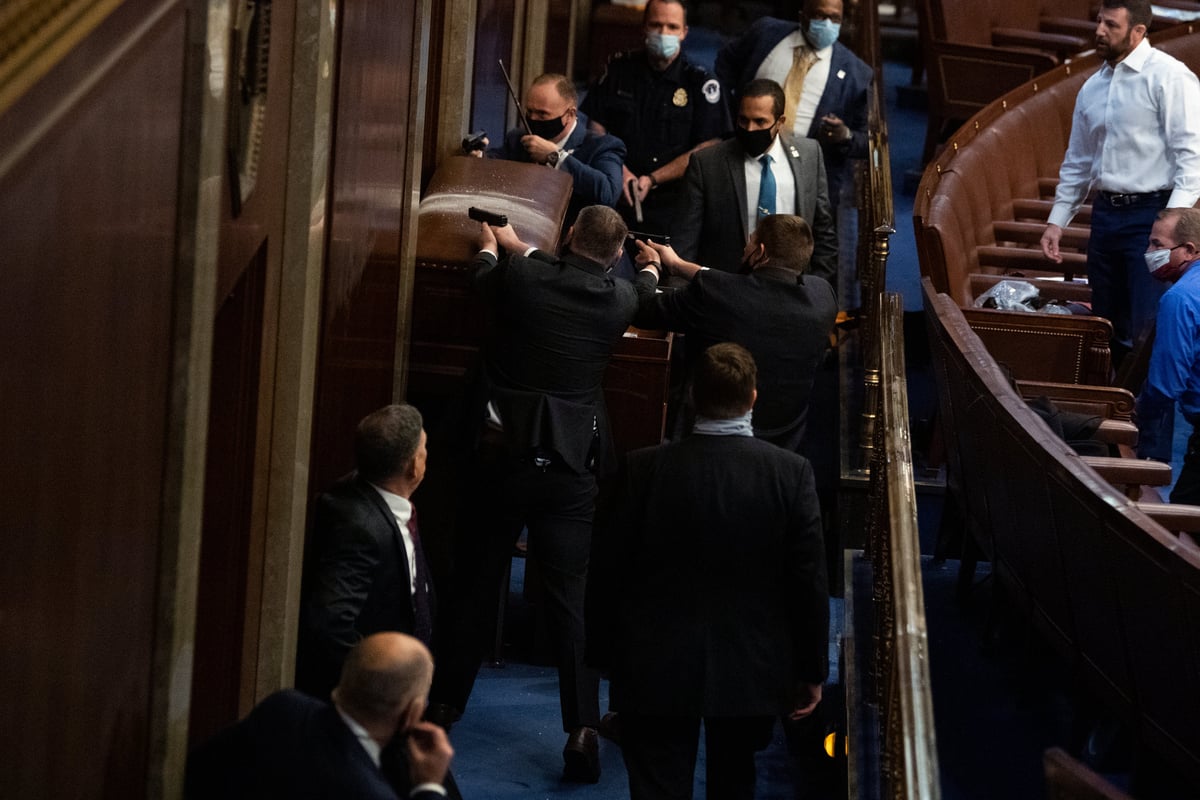 Security protects the entrance to the House of Representatives chamber. Image: Getty.

At least one protestor made it as far as the Senate Chamber, where he stood upon the dais and yelled, "Trump won that election".

They’re in the chamber. One is up on the dais yelling “Trump won that election!” This is insane pic.twitter.com/p6CXhBDSFT

Several people got on to a scaffolding outside Senate, took it to second floor, which looked like the area where McConnell’s office is located, and started banging on windows pic.twitter.com/IIZ21nkzFT

Sadly, the event has proven not just disruptive but deadly, as D.C. police confirmed a woman was shot and killed.

Three other people, including another woman and two men, died during the riots due to separate "medical emergencies".

"We believe there was some kind of medical emergency for each of them but again that's very preliminary," Washington DC Police Chief Robert Contee said, according to ABC News.

While it's understood she was a citizen, no official information is available about her identity or that of the shooter.

What were the protestors trying to stop?

It seems they aimed to prevent the certification of the 2020 presidential election result, which was taking place inside the building.

This event is usually a formality. It sees the electoral votes opened by the Vice President and counted in front of a joint sitting of Congress (i.e. the House of Representatives and the Senate).

But nothing about this election has been typical.

The session, which was due to last several hours, is also a formal opportunity for lawmakers to raise challenges to the validity of an electoral vote — and Trump's key Congressional supporters seized it.

Despite having no evidence of voting irregularities, the group mounted an effort to dismiss tallies in certain states, drawing criticism from both sides.

Even Senate Majority Leader Mitch McConnell — a Republican and formerly one of Trump's key allies — denounced the attempt, saying, "If this election were overturned by mere allegations from the losing side, our democracy would enter a death spiral."

It's the latest step in President Trump's desperate attempt to cling to high office.

Despite having only earned 232 Electoral College votes compared to his opponent's 306, President Trump has consistently maintained the election was "stolen" and that he is the rightful winner. He has made entirely unproven allegations of voter fraud, ranging from "dead people voting" to unsupervised vote counting.

Since the results came in, he has engaged lawyers to mount dozens of legal challenges over the outcome in key states. Not a single one has found any evidence of irregularities.

But his most loyal supporters — both Congressional and civilian — have stuck by him, regardless.

So, did Trump encourage the Capitol siege?

But just hours before the chaos at the Capitol, the president riled up attendees at a rally near the White House, vowing he would not let his supporters be silenced.

"We will never concede. It doesn't happen. You don't concede when there's theft involved," he told the crowd.

He also once again called on Vice President Mike Pence to overturn the votes of the Electoral College (the body of electors that determine who becomes president based on the outcome of the popular vote in their state). Yet no matter how much President Trump may want to overturn the will American voters, his deputy simply doesn't have the power to do that.

Clearly, though, he doesn't seem to know or care.

"Mike Pence is going to have to come through for us, and if he doesn’t, that will be a sad day for our country," Trump told his supporters at the rally in Washington D.C. scheduled the same day Congress is set to certify Biden's presidential win https://t.co/Fj1qEL16hc pic.twitter.com/wIwT3YUPZm

"All Vice-President Pence has to do is send it back to the states to recertify and we become president and you are the happiest people," he told the rally.

"We're going to see if we have courageous leaders or of we have leaders that should be ashamed of themselves," President Trump said.

"And if they do the wrong thing, we should never forget."

Within hours, some of his most loyal followers were bursting through barricades towards those leaders.

IMPORTANT: this is exact moment the siege of the Capitol building began as the two men in front ripped down a preliminary barrier & rushed officers who were behind a 2nd barrier

They then encouraged others to follow their lead. Officers appeared to be taken completely off guard pic.twitter.com/LE0a01PXBi

BREAKING: revolution in process as Trump supporters break into the Capitol building, attacking police, breaking windows, and knocking down doors

The people have pushed through & are storming to main chambers pic.twitter.com/NW6VDDNBQw 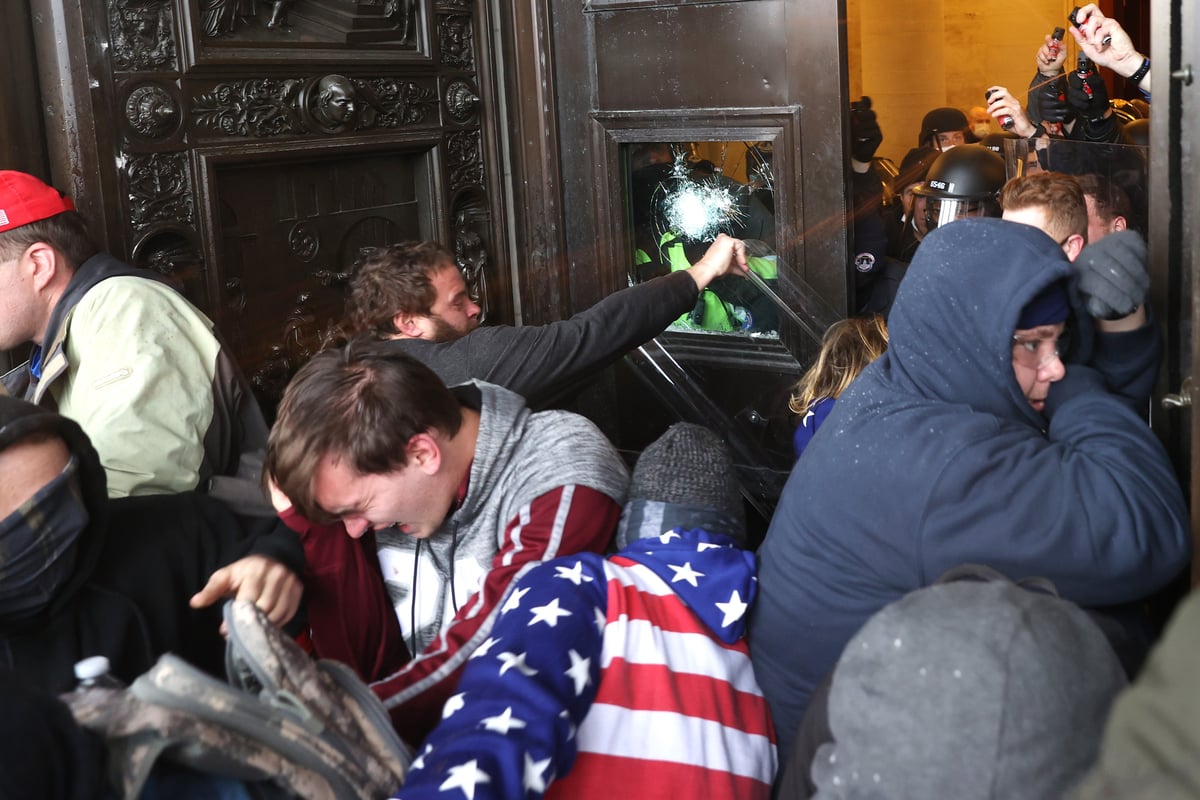 The mob forced its way inside the building. Image: Getty.

How has President-Elect Biden responded to the siege?

As authorities worked to contain the situation at the Capitol this morning, President-Elect Joe Biden gave a national address in which he called on President Trump to demand an end to the siege.

"This is not decent, it is disorder, it is chaos," he said.

"It borders on sedition and it must end now. I call on this mob to pull back and allow the work of democracy to go forward."

How has President Trump responded?

President Trump subsequently issued a video message via Twitter, in which he urged protestors to leave the Capitol but sympathised with their motivation.

"I know your pain, I know your hurt. We had an election that was stolen from us. It was a landslide election and everyone knows it, especially the other side," he said.

"This was a fraudulent election, but we can't play into the hands of these people."

The video was subsequently deleted by Twitter, Snapchat and Facebook, the latter of which ruled that it "contributes to rather than diminishes the risk of ongoing violence".

"This is an emergency situation and we are taking appropriate emergency measures, including removing President Trump’s video,” tweeted Facebook’s vice-president of integrity, Guy Rosen.

Then, in a stunning move, the platforms later suspended President Trump's account entirely.

Future violations of the Twitter Rules, including our Civic Integrity or Violent Threats policies, will result in permanent suspension of the @realDonaldTrump account.

As night fell in D.C., riot police moved the mob away from the Capitol Building, but there are fears of further unrest.

Meanwhile, Congress reconvened to continue the process interrupted by the insurrection hours earlier.

House Speaker Pelosi issued a strong message to those responsible for the siege.

"To those who strove to tear us from our responsibility, you have failed," she said. "To those who engaged in the gleeful desecration of this, our temple of ... American democracy, justice will be done."

Reply
Upvote
1 upvotes
Trump has been inciting this melee since he lost the election, but where was the condemnation of the previous rioting and acts of vandalism that took place in Washington DC during 2020.?

Reply
Upvote
1 upvotes
@guest2 literally all over the conservative media, from law enforcement and from the entire Republican Party and most Democrats, where have you been?

Reply
Upvote
@cat Rubbish, not once did Pelosi and Biden  and co condemn the rioting, looting and destruction.

Reply
Upvote
1 upvotes
The amount of disinformation out there about what is going on is staggering.
(Not this article, this is a good rundown, just not up to the minute accurate)

Reply
Upvote
1 upvotes
@random dude oh sure, it's definitely happening.
My favourite so far has been the video if the cops opening the barricades God the protesters.
But if you find the full video it shows there was a bunch of protesters already behind the barricade.
They fell back to an inside position. Exactly what you should do when the 'enemy' is behind you.
News
General
Opinion
True Crime
Politics
Sport
Explainer
Entertainment
Celebrity
Reality TV
Movies
TV
Books
Rogue
Royal
Lifestyle
Beauty
Fashion
Weddings
Home
Wellness
Health
Fitness
Travel
Food
Parents
Before The Bump
Pregnancy
Baby
Kids
Teens
School
Parent Opinion
Work & Money
Money
Finance
Career
Lady Startup
Relationships
Sex
Dating
Separation
Friendship
Family
Real Life
Couples