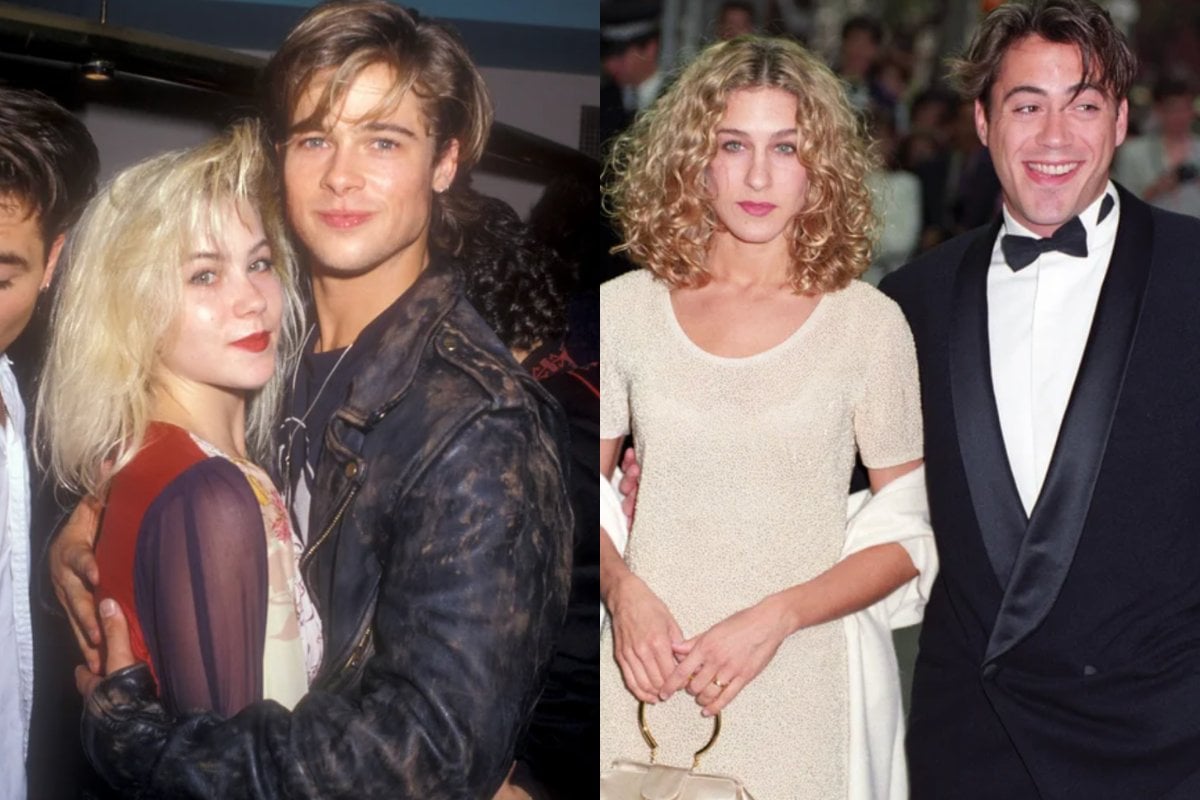 From the '90s, '00s, and now into recent years, it seems as though all of Hollywood's elite has dated one another, at least once. ...And that's because they basically have.

Although we remember plenty of these romances, there are many that we have since forgotten about.

WATCH: How celebrities are getting creative in isolation. Post continues below.

To relive the glory days when our favourite celebrities got together (and stare at their questionable fashion choices), here are 17 celebrity couples that we completely forgot ever existed.

Although everyone remembers Billy Bob Thornton dating Angelina Jolie, before they got together he was with Academy Award winner, Laura Dern.

The couple met on the set of the Ellen sitcom in 1997, where Dern famously played DeGeneres' girlfriend in the "Coming Out" episode and Thornton guest-starred. The two went on to date for two years and even became engaged.

However, Thornton sadly moved onto Jolie and married her... while the pair were still together.

In a 2000 interview with Talk Magazine, Dern spoke about their breakup, citing it as a sudden death.

"I left our home to work on a movie, and while I was away, my boyfriend got married, and I've never heard from him again," she said.

"It's like a sudden death. For no one has there been any closure or clarity." 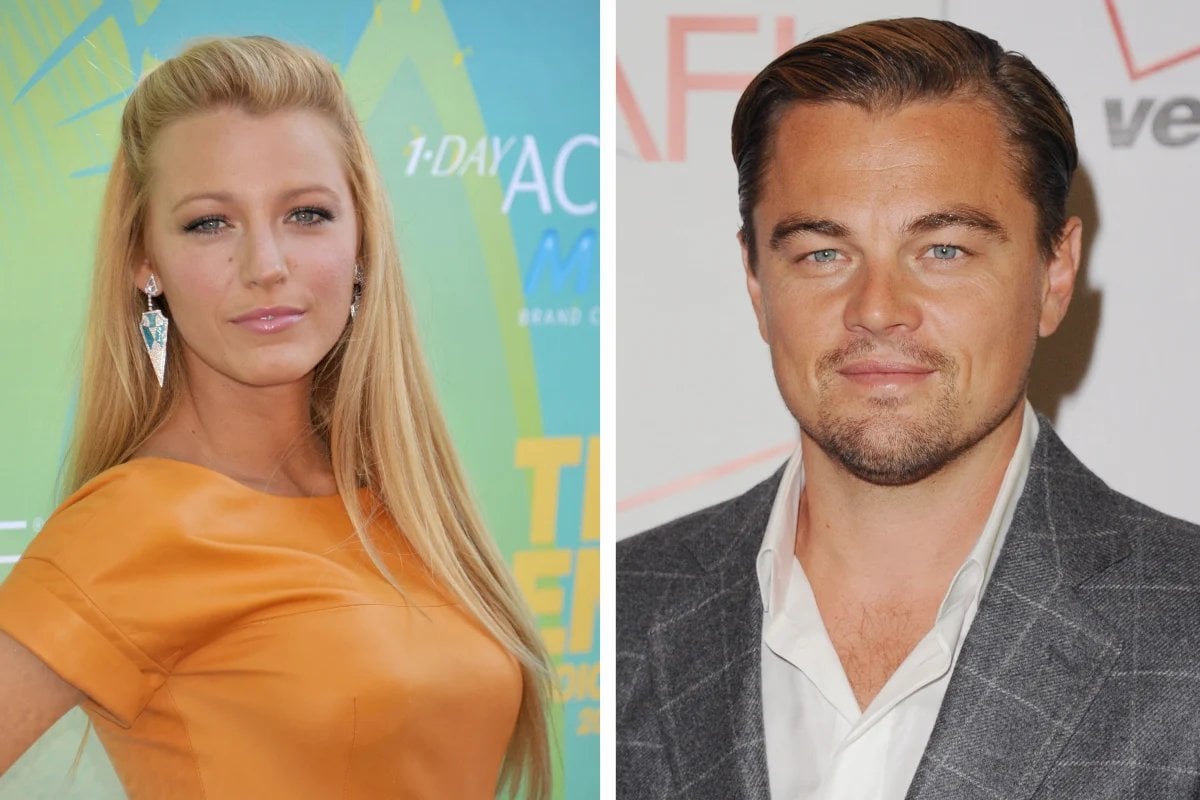 At 24, and at the height of her Gossip Girl fame, actress Blake Lively started dating Leonardo DiCaprio.

After the Cannes Film Festival in 2011, the couple were photographed together across the world - on a yacht in Italy, partying in New York City, and even in Australia. The romance only lasted for a few months, their breakup confirmed in October 2011, with reps for both stars saying they would "remain friends".

Reflecting on the relationship between the two stars, Gossip Girl executive producer Joshua Safran spoke to Vanity Fair in 2017.

He noted the real life relationship couldn’t help but influence the show.

"We learned a lot from Blake. When I think about shooting the LA episodes, Blake was dating [DiCaprio] at the time, and she had this thing where she took photos she sent to Leo," he said.

"Blake was way ahead of the curve. It was pre-Instagram. She was documenting her life in photographs in a way that people were not yet doing."

Although both of these a-list celebrities were known to date other well-known actors, most people might've forgotten they dated each other. For three years.

The couple dated from 1997 to 2000 (just after Paltrow's long-term relationship and engagement to Brad Pitt ended) and starred in two movies together, Shakespeare in Love and Bounce.

When looking back on their relationship, Paltrow explained that she and Affleck were just too different.

"I just think we have a very different sort of value system. Ben makes life tough for himself. He’s got a lot of complication, and you know, he really is a great guy. So I hope he sorts himself out," she told Entertainment Weekly. 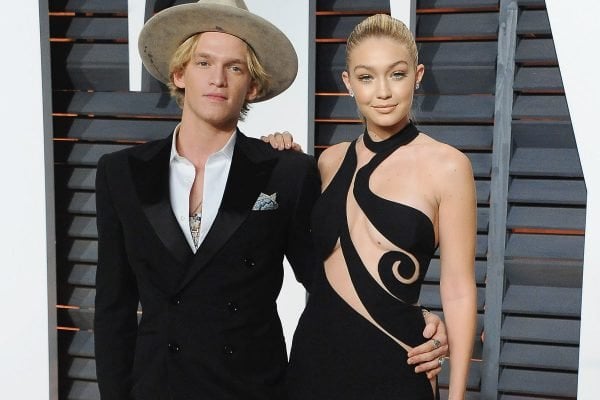 From 2013 until 2015, Australian singer (and Miley Cyrus' ex-boyfriend) Cody Simpson was in a highly publicised relationship with supermodel Gigi Hadid.

Hadid first met Simpson when she appeared in his music video for 'Surfboard'.

In May 2015, the pair called it quits. Fun fact: their respective mums have remained good friends.

Simpson told DuJour following their split: "I love my ex-girlfriend, I always will. It was an amicable, mutual decision, and we still talk every now and then, but the highly publicised thing made me uncomfortable.

"Going out to dinner and there being all this paparazzi and stuff… as soon as we split I had the realisation that I was straying away from who I was as a whole person. I want to keep it low-key, and focus on my music."

Bosworth has shared that since dating Bloom, she has sworn off actors altogether.

When appearing on Andy Cohen's late-night talk show, Watch What Happens Live With Andy Cohen, she explained the problem with dating actors.

"It's no bueno. It's just — it's too much of the same thing," Bosworth explained.

She said that because Bloom was at the beginning of his Pirates of the Caribbean popularity (the first film was released in 2003), it became all too much.

"It hit when we were together," she recalled. "I think when you kind of go through something like that with someone, it's like you feel like that's a real anchor in many ways because it was just crazy. We would land at airports, and he would have, like, girls, like, lifting their shirts up... It was just wild.

"I mean, if you're just two normal people hanging out, and all of a sudden it just blows up into something really surreal, then you kind of look at the person you're with as a rock in many ways. And I think we felt that way about each other through a crazy time."

Many of us might have forgotten that Hayek dated the Italian Job actor, but the couple were actually together for four whole years.

Sadly, there are little details on their relationship besides the fact that the pair worked on the film Frida together in 2002.

Although Tyra Banks is known for keeping her private life extremely private, there are photos to prove that her and the Kiss From A Rose singer did indeed date in the mid '90s.

However, it was only brief and the two have since married others (hello, Seal and Heidi Klum).

When Seal appeared on an episode of Watch What Happens Live, he answered a viewer question about whether Banks was the inspiration for his 'Human Being' album.

"It wasn't inspired by her but we bump into each other every now and then, there's no drama," he said.

After meeting on the set of the 1984 film, Firstborn, Sarah Jessica Parker and Robert Downey Jr. dated for six years.

At the time, Downey Jr. told People: "I'm really happy with Sarah, and I don’t want to ruin it by planning too far ahead. But the way I feel now, marriage looks like where we’re headed."

However, due to Downey Jr's substance addiction, the two never made it to that next step.

"I was so selfish. I liked to drink, and I had a drug problem, and that didn’t jibe with Sarah Jessica, because it is the furthest thing from what she is.

"She provided me a home and understanding. She tried to help me. She was so miffed when I didn’t get my act together… I was in love with Sarah Jessica, and love clearly was not enough," he told Huffington Post.

Yes, this unlikely pair dated during the 80s. And, they met at none other than Sean Penn and Madonna’s wedding in 1985. Cher was 39, and Cruise was 23.

While Cher admitted to Andy Cohen on Watch What Happens Live with Andy Cohen, that it was only a brief fling, she did say that "it was pretty hot and heavy for a little minute," and she still considers Cruise one of her top five in bed. 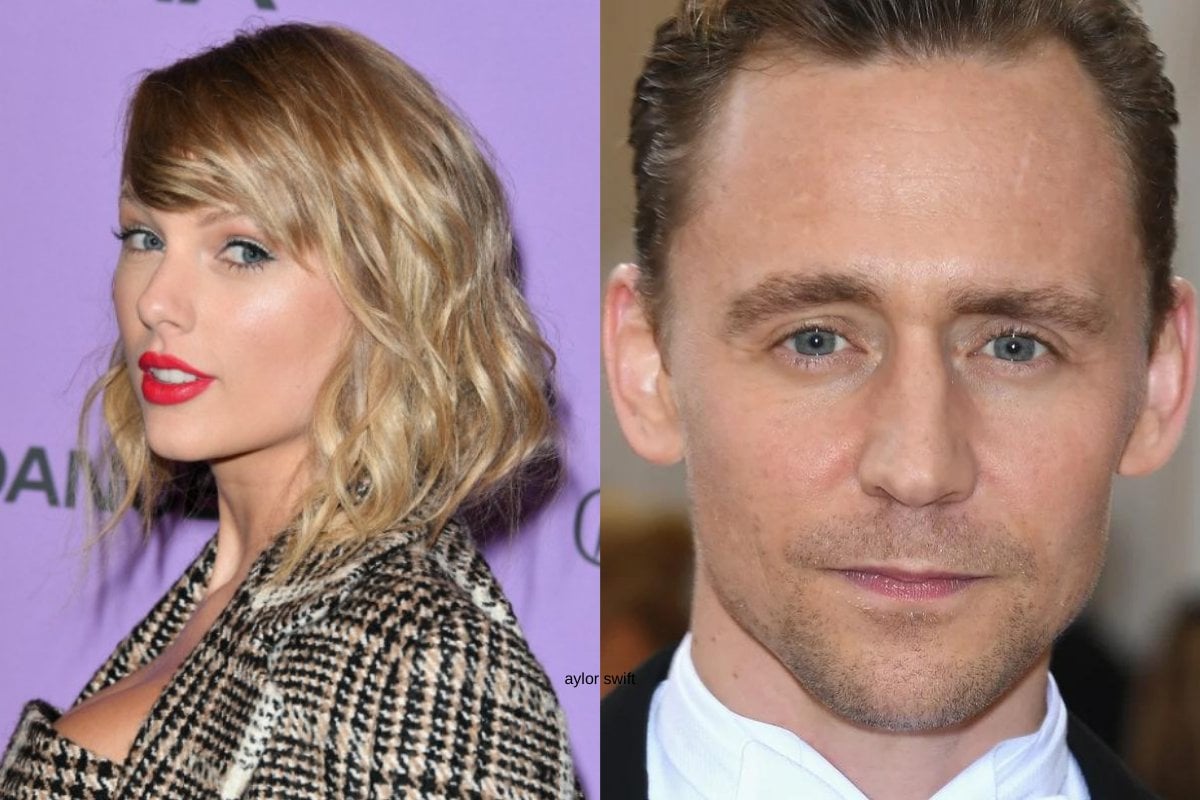 Taylor Swift is the queen of turning a bad breakup into a chart-topping hit.

Not long after things ended between Calvin Harris and Swift, the singer was spotted kissing British actor Tom Hiddleston on a beach in Rhode Island, which surprised precisely everyone.

The couple travelled all over the world together, to places including Italy, America, Australia and England, before calling it quits after three months.

But of course, who could forget the cheesy "I Heart T.S." T-shirt Hiddleston wore for Swift's Fourth of July party in 2016.

"[He's] like a soul brother to me, except that I want to jump his bones," Morissette said about their relationship.

While Reynolds shared: "I love her music... but it can be awkward when she walks in and I’m listening to it in my underwear dancing."

However, after a three-year engagement, the two sadly ended their relationship.

When discussing their split, Morrisette explained to the LA Times, "I've been on a constant journey toward finally surrendering and hitting the rock bottom that I've been avoiding my whole life... so this was a huge, critical juncture for me. Everything broke, and it was an amazing and horrifying time".

While Reynolds was quickly onto his next relationship, with none other than Scarlett Johansson.

Unfortunately, it was only one date to the 1989 MTV Movie Awards for Pitt and Applegate, but man, they made a good-looking couple.

Cameron Diaz and Justin Timberlake dated for almost four years, from 2003 to 2007.

The couple, who had an eight-year age gap, met at the Nickelodeon Kid's Choice Awards in 2003 and were known as one of the most popular celebrity couples during the period they dated.

There were rumours the reason they broke up was because of Timberlake allegedly cheating with Scarlett Johansson (she starred in his music video, What Goes Around Comes Around) however, nothing was ever confirmed.

Long before Ryan Gosling and Eva Mendes got together, he dated Sandra Bullock.

The pair met on the set of the 2002 psychological thriller Murder By Numbers, which they co-starred in.

Bullock (who was 37 in 2001) played a cop chasing a young, rich kid played by Gosling (then 21), who she suspected of murdering a young girl.

The 16-year age gap turned a few heads at the time, and the pair remained pretty coy about their relationship.

But for the first time in 2011, Gosling spoke publicly about their relationship.

Speaking to The Times about his ex-girlfriends Bullock and Rachel McAdams he said, "I had two of the greatest girlfriends of all time. I haven't met anybody who could top them".

Hewitt, the star of The Client List, dated John Mayer in 2002. Their relationship was widely talked about, as a rumour suggested his hit song, Your Body is a Wonderland, was written about her.

However, Jennifer later denied this, sharing that the song was in fact written before they met.

Melissa Joan Hart and Ryan Reynolds met while working together on the Sabrina the Teenage Witch TV movie in 1995. Reynolds played one of Sabrina's crushes.

Only, she had a boyfriend during their fling.

"I had a boyfriend at the time but we were smitten and cute and he was adorable. He was a really, really nice guy. [He] probably would have been a great boyfriend, and I didn't end up with the other guy, so maybe I should have taken a chance." 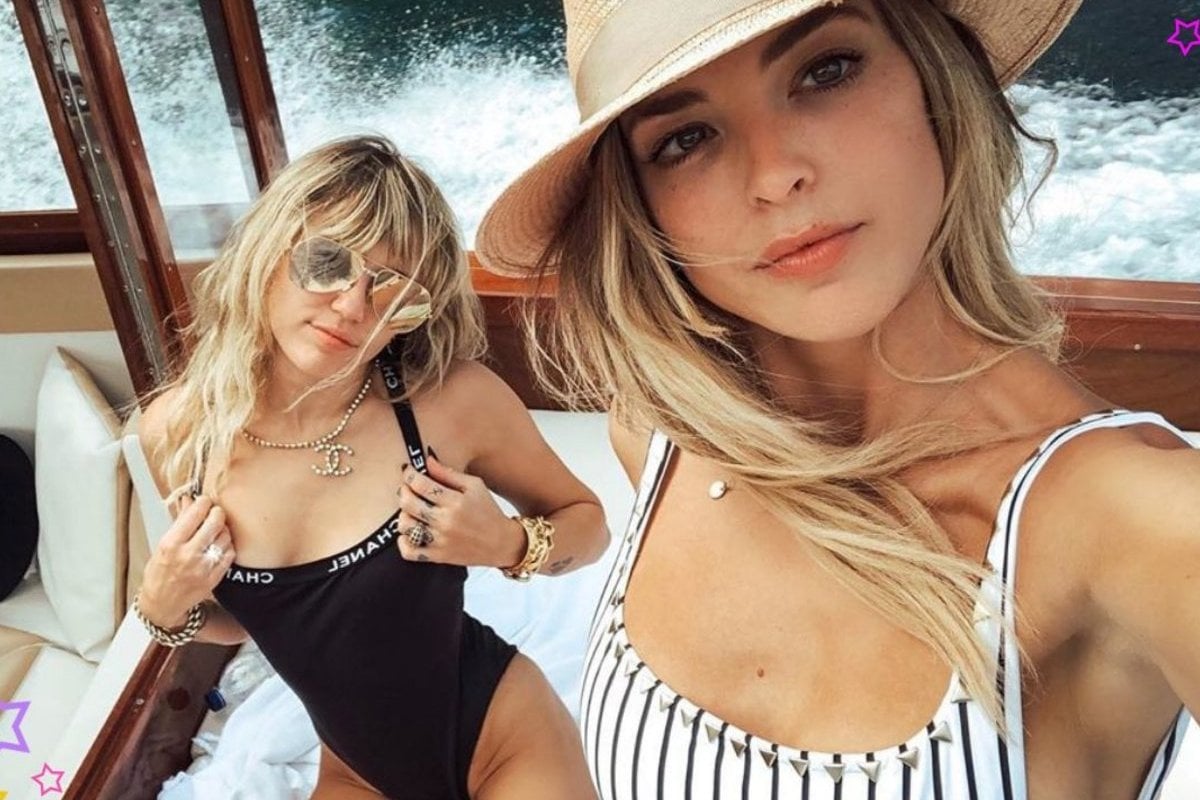 Remember when Miley Cyrus and The Hills star Kaitlynn Carter were a thing? Because we completely forgot. That's what two years of a pandemic will do.

Soon after Cyrus and Liam Hemsworth called it quits, she was spotted on the ultimate rebound holiday with Carter who had recently ended her marriage to Brody Jenner.

Reflecting on the short-lived romance, Carter said: "As my friend and I spent that August travelling through Europe together and trying to move past our respective breakups, my first and only romance with a woman was born.

"Reflecting back on our three-year friendship, I realised I'd always been drawn to her in a way I wasn't with other friends, but until that trip, it had never crossed my mind to think of her in a romantic sense."