If it isn’t our favourite time of the week when a bunch of people sit around a fancy mansion and talk about that one time someone called someone else a woof woof by the pool pool.

It’s a glorious time to be alive.

We open on Osher arriving at the mansion with a blindfold because sometimes he’s kinky like that. ¯\_(ツ)_/¯

The girl who does a cheerlead sometimes yells out “50 Shades of Matt” and yes SWEETIE THIS IS YOUR MOMENT.

We love her unconditionally.

Emma gets the blindfold/single date which is an odd choice given her history of locking Matt in the bachie basement and counting his toenail clippings. They meet at a castle where Matt hands Emma a blindfold and says they're going to "limit one sense so they can heighten another" which seems unnecessarily sexual but ok.

Matt then blindfolds Emma and starts feeding her... fungus. She says "if I feel this wriggling around in my mouth, I will die" and Osher giggles from behind the couch.

Emma then blindfolds Matt and... um... something weird happens...

Emma says she likes "hand-feeding" Matt and Matt says he likes being "hand-fed" and yuck pls.

Anywho, they sit on a couch and Matt gives Emma a "piece of wood" and she cries because she's pretty sure Helena got pearl earrings and all she got was this crappy piece of wood with some feelings on it. ¯\_(ツ)_/¯

Listen as we unpack everything that happened in the Bach mansion this week on our Mamamia Recaps podcast... Post continues after audio

Osher has decided the best way to make everyone forget about the woof woof by the pool pool incident is to literally get the women to rank themselves by their qualities.

The first quality is selfless.

The women line up and then Osher does a sneaky sneak and announces that the five most selfless women get a rose FOR FREE. They also get to sit down and judge the other women which everyone knows is the greatest gift of all.

The remaining women have to rank themselves by how "fun" they are. Abbie proceeds to prove how "fun" she is by yellin' at the other women and stealin' the top spot, so that a poor short nameless woman has to go in the bottom spot.

Next, they have to rank themselves by... intelligence.

The one that likes to cheerlead sometimes is voted as the least intelligent which is just... factually inaccurate. She rhymed NIKKI with TRICKY while DANCING. ¯\_(ツ)_/¯

Abbie and Brianna are the final two and they have to write down their feelings for Matt and then read them out to him while the rest of the women judge them.

All the women agree that Abbie probs has it in the bag, but they decide they'll stick around in the competition for the free food and the swears by the pool.

She brings in her actual diary and tells Matt she's just looking for someone to play 'I Spy' with and SAME.

When they arrive back at the mansion, Abbie has a rose.

The women seem genuinely happy for her... 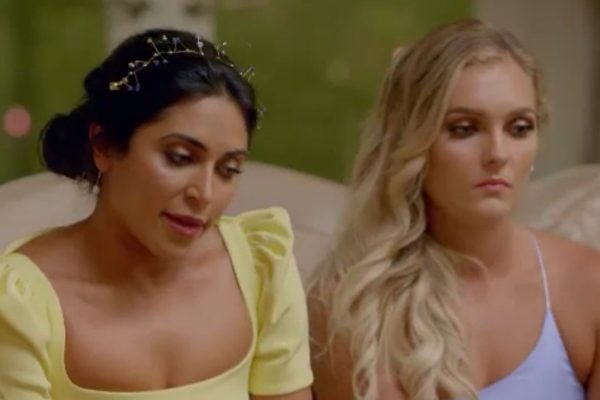 Where all the good swears happen.

Osher turns up, does a giggle, and explains to the women that the rose ceremony will be "live".

Matt will spend time with each of them and if they don't receive a rose they have to go home and swear by their own pools.

Time for some manufactured drama pls.

Sogand decides she's had 'bout enough of Abbie's sh*t so she's going to confront her about her lyin' ways.

They sit on a couch and Sogand says she reckons Abbie's lying to Matt about wanting to get married and have kids.

Abbie says she already had six of his kids last week so... there.

Sogand does a yell because she's just remembered that time Osher tried to put another Persian in the mansion and that was hard for her.

Meanwhile, the rest of the women are acting casual in the background.

Abbie says "this is a joke" and does a storm off.

The one that cheerleads sometimes starts crying because she's awkward and SWEETIE WE LOVE YOU UNCONDITIONALLY. Matt takes her for a chat and she tells him she's looking for someone who she can have "some pretty good sex" with and that's the truest sentence that's ever been uttered on this goddamn show.

He then takes Brianna for a chat. She says she's not really interested in marriage... on a TV show that's literally been created to get more white people to marry each other.

Matt sends her home and gives Nikki the final rose because... angel.

After approximately 72 minutes of no one calling anyone a woof woof by the pool pool this goddamn episode finally ends.

Mamamia recaps The Bachelor episode 6: One woman is asked to leave the mansion.

This season hasn't really drawn me in. I thought I would like it but I dunno, Matt just doesn't vibe well with me. He seems a bit fake. And the girls are just catty and fake as well.

I know, I know, the bachelor is always fake. But some seasons feel more real than others!