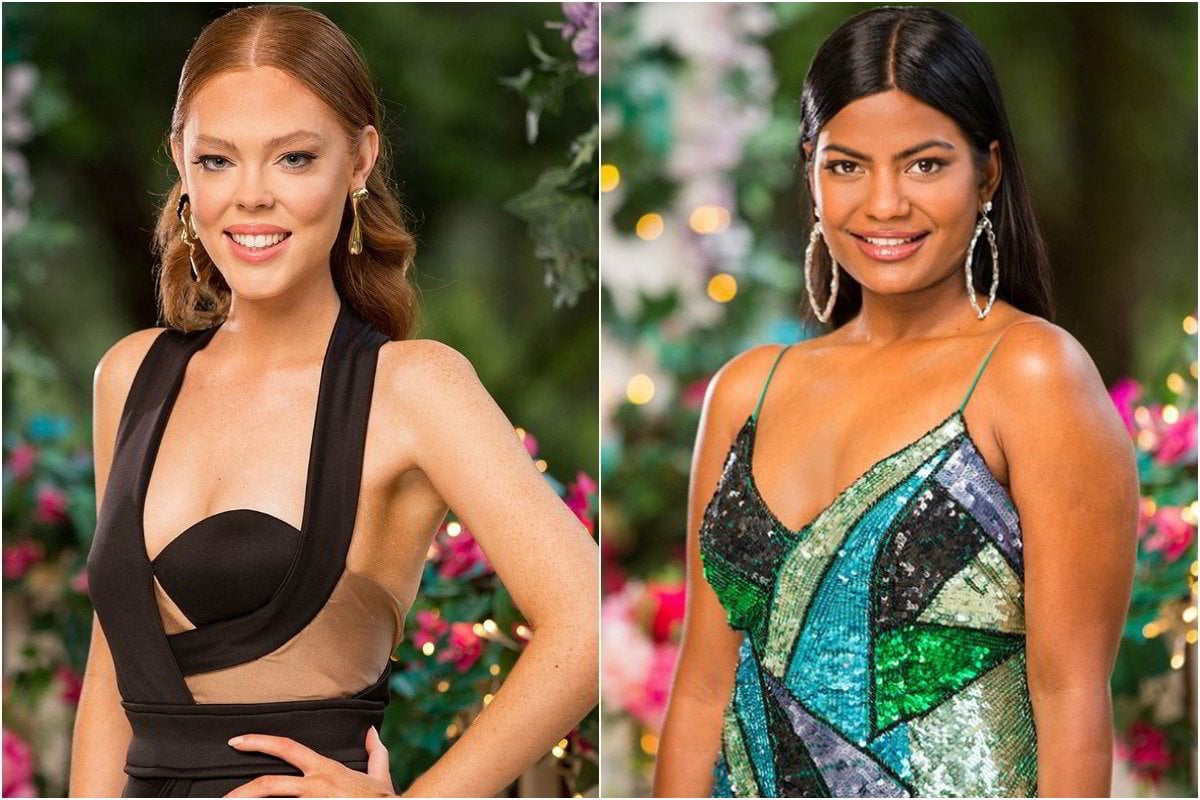 We're only two weeks into this season of The Bachelor and well, it's already been a lot. And unfortunately for all the wrong reasons.

Everyone tells me not to expect much from a show that pits women against each other to vie for the attention of a man, and they’re right, but even my lowest expectations for Australian TV didn’t account for the racism I've seen unfold this season.

I’m a relative newbie to The Bachelor. I watched my first season last year and, while it obviously wasn’t super progressive, the discourse around Abbie Chatfield and her 'villain edit' started an important conversation that's now transformed into something rather impressive. Maybe that’s why I thought this season we’d have the same level of discourse and critical thinking — but nope.

Watch this year's Bachelor decorate a cake while answering rapid fire questions about the season. Post continues below.

Even before Locky’s season began, there were red flags. As the promos ramped up, Areeba — the only woman of colour we had been introduced to — was immediately cast as a cut-throat b*tch. Gee, giving the only brown woman a villain edit. Groundbreaking.

There’s a long history of painting assertive brown women as competitive, “aggressive”, or a “threat.” It dates all the way back to colonial times — the perfect way to simultaneously gaslight, dehumanise and silence us. The angry-brown-woman stereotype delegitimises our emotions and justifies crimes against us. You can read more about it in Ruby Hamad’s incredible book, White Tears Brown Scars.

Despite all this, I watched The Bachelor anyway. But instead of seeing the exciting Pakistani-Australian representation I’ve been craving my whole life, I got to see a brown woman get racially abused for laughs.

If you need a reminder, Zoe-Clare spent the majority of the first cocktail party complaining about Areeba for interrupting her chat with Locky earlier. And the rant became about race very fast. ﻿

She mocked Areeba’s name, calling her “abracadabra”, which felt so overtly racist that I was left staring at my screen with my mouth hanging open.

It hit way too close to home for me. My name is Soaliha. Traditionally pronounced Saw-leh-ha. With a hard ‘h’. I have been called every butchered and anglicised version of my name you can think of. I’ve even had a teacher call me “Saliva” at school.

When I was 18 and working my first job in retail, a manager told me my name was too hard to pronounce and that she would call me Leah instead. I was literally called “Leah” on the actual rosters for months without my consent, by multiple managers in multiple stores. And I didn’t have the confidence to argue about it because I didn’t want to be branded the ‘angry brown woman.’

The angry brown woman trope incenses me on a personal level, as someone who is constantly branded as “aggressive” or a “bully” any time I dare to assert myself and challenge casual and overt racism from white women. The tone-policing and gaslighting I experience from white women any time I have the audacity to be assertive, blunt or emotional when I talk about racism and white fragility is astronomical, and seeing this unfold on national TV with no accountability or compassion was deeply triggering.

On top of the name-bashing, Zoe-Clare went on a drunken rant glorifying white Anglo features and accused Areeba of discriminating against her. Areeba, the only visibly dark-skinned woman on the show, was accused of discrimination and bullying by a white woman. Let that sink in. And all because she dared to interrupt someone, which happens every season and let's be real, is expected behaviour on this show. Of course, we weren't shown anyone calling it out or standing up for her.

What I saw play out between Zoe-Clare and Areeba was what countless white women have done to me - gaslight and tone-police me for daring to see myself as an equal, and then weaponise their whiteness and cry discrimination when I don’t back down.

Listen to the Spill, Mamamia's daily entertainment podcast. On this episode, co-hosts Kee Reece and Laura Brodnik discuss the ugly side of The Bachelor. Post continues below.

And on top of all this, the WOC gets the 'villain edit'. Areeba was immediately branded as a mean girl, and “cancelled” by the public after she had a fight with Juliette on Wednesday night's episode.

The fact that the Australian public was more offended by Areeba being mean than the racism towards her is the pinnacle of white Australian society and how hostile it is for brown women.

In case you missed it, Areeba and Juliette actually salvaged their relationship. Areeba even helped Juliette score alone time with Locky afterwards - but you won’t see people defending Areeba like they have with Zoe-Clare.

Zoe-Clare has been laughed with for her silly, apparently harmless rant. She's been called “iconic” and there have been calls for her speech to be “framed.” Areeba, on the other hand, was branded a mean bully and denied any compassion, empathy or benefit of the doubt.

The double standards in how WOC are demonised and “cancelled” for behaviour that white women get away with on a regular basis are clear as day in this season of The Bachelor. If a brown woman being mean is more offensive to you than the racism we have witnessed on screen… well, you’re probably racist.

It’s 2020. If we’re still at the stage where a white woman can racially insult a brown woman on prime time TV and it’s brushed off as entertainment, then we’re far more backwards than anyone wants to admit.

Reply
Upvote
4 upvotes
I don't see this as having anything to do with race. All I see is two young women being unnecessarily mean and bitchy, perhaps under the influence of too much alcohol and being egged on by producers. You can't edit words into someone's mouth. There are girls who go on these shows specifically to GET the villian's edit. It turns them into D-grade celebrities in a matter of weeks. I feel like BOTH these young women likely fall into the category of wanting the villian's edit. Their skin colour has nothing to do with it.
T
tai 2 years ago

Reply
Upvote
Wow! As a Latina woman and been living in Australia for only 4 years, THIS is exactly what I see every day, and not so much towards me personally but from white Australians to other AUSTRALIANS of colored skin. I am not an Aus citizen yet so I still fall under the “exotic foreigner” category (which is shitty in its own way), but I see everyday how people of color are labeled as the “angry resentful person of color” when they call out Australian racism, which is still rampant in today’s society, and it makes me feel so powerless and so horrified by society in general. The fact that this is televised on prime time like a form of entertainment is just another level down, moving backwards and not forward. How can we not get angry at this?!
News
General
Opinion
True Crime
Politics
Sport
Explainer
Entertainment
Celebrity
Reality TV
Movies
TV
Books
Rogue
Royal
Lifestyle
Beauty
Fashion
Weddings
Home
Wellness
Health
Fitness
Travel
Food
Parents
Before The Bump
Pregnancy
Baby
Kids
Teens
School
Parent Opinion
Work & Money
Money
Finance
Career
Lady Startup
Relationships
Sex
Dating
Separation
Friendship
Family
Real Life
Couples