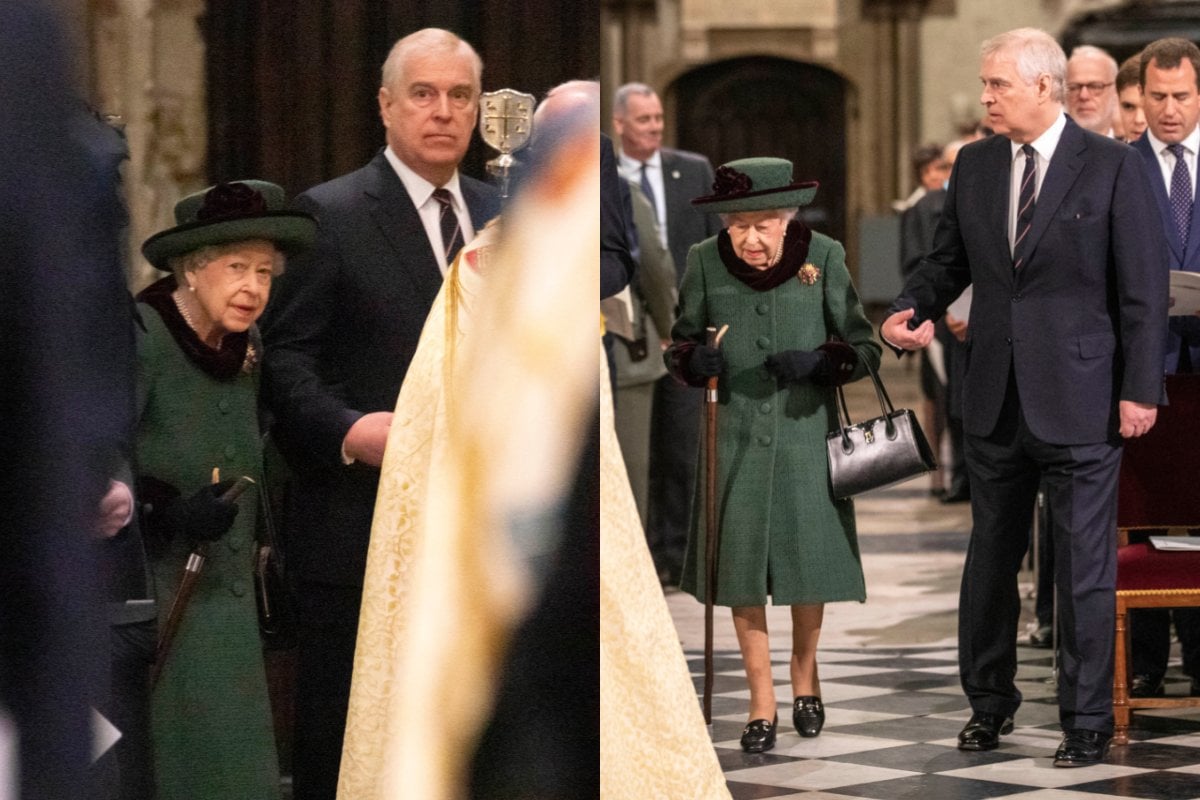 On March 29, the Queen sat somber and teary-eyed at a memorial service for her husband Prince Philip, who died in April 2021, aged 99.

The event was a belated celebration of Philip's life, as only 30 mourners were able to attend his funeral service due to strict coronavirus rules. Among the crowd were Prince Charles, Prince William, Kate Middleton and their children, British Prime Minister Boris Johnson, military figures and more than 500 representatives from charities and other organisations the late Duke of Edinburgh championed.

But none of this really mattered, because there was one attendee that overshadowed the entire service.

As the Queen entered London's Westminster Abbey, she was escorted by her second, and disgraced, son, Prince Andrew.

Andrew resigned as a 'working royal' in 2019, months after his proximity to convicted sex offender Jeffrey Epstein resurfaced and following a disastrous TV interview about sexual abuse allegations.

Just weeks ago, Andrew settled a civil sexual assault case with a payout to his accuser, Virginia Giuffre.

He was always intending to attend the memorial, but it had been expected that the Dean of Westminster would take the Queen to her seat, with Andrew following behind.

So, images of him walking arm-in-arm with his 95-year-old mother during a public appearance was always going to cause a stir.

That is an even bigger story now, because it has emerged that the world almost didn't see the photos.

The Royal family permitted only one media photographer entry to the memorial service, with their photos to be distributed to other publications and editorial photo supplier Getty Images.

This photographer was The Times' Richard Pohle. In a column for his employer, Pohle described how the event began with a "high state of panic", because he was initially told by a Buckingham Palace press employee he could not photograph the Queen until she was seated.

"There was some speculation that she might arrive using a buggy or even a wheelchair. If I had no picture of that I would have the entire British media asking why not," he wrote.

Then, Pohle discovered the Queen would enter the Abbey alongside Andrew.

"This changed everything. 'I absolutely need to photograph this,' I said. The arrival of the Queen was now the major news event. I could see them wavering but they repeated that the no picture order 'came from the top' and that 'it wasn't up to them.'"

Pohle said he "would be in a hell of a lot of trouble" from colleagues and other media "if there was blanket TV coverage of the Queen openly showing support for Prince Andrew but no photographs".

As he pointed out, the event was being broadcast live on the BBC, so the Queen's entrance with Andrew would not stay secret.

He was persistent and long story short, the aides eventually relented.

However, it required quick thinking and some fancy footwork to get the photos he wanted, as his view was blocked when everyone stood up to mark her arrival.

"I brushed past the press officer and could feel a hand reach out to try to stop me but I rushed past," Pohle wrote, managing to take the photograph he knew "would be the main picture from the ceremony that the news outlets were looking for". 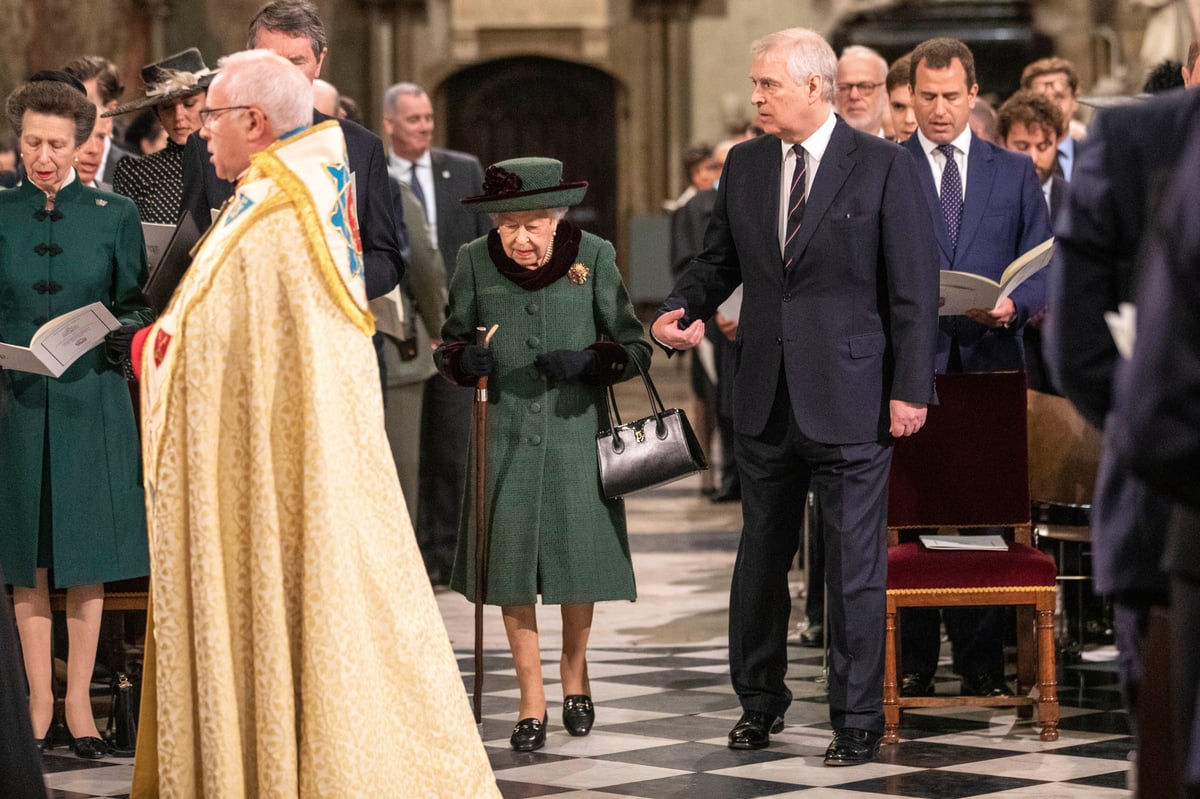 They were splashed across the front page of the major British newspapers the next day, alongside headlines like 'The pain... and the stain', 'Royal fallout over Queen's ultimate act of love' and 'Andrew given key role at Queen's tribute to Philip'.

As The Mirror rightfully pointed out, Andrew's very public appearance "astonished" the nation.

The British media were quick to report on the rumoured unhappiness of other Royals and staff at the Queen's decision to be accompanied by her son, which many saw as (another) endorsement of the disgraced royal.

A Daily Mail report stated senior members of the family, including Charles and William, were "dismayed".

"It would be a great shame if the service was overshadowed by all of this," a family source told the tabloid. "There is a strong sense of regret that this has happened."

His presence was always going to be controversial, but Prince Andrew taking on the self-appointed role of consort for the day has completely overshadowed a beautiful service. And to think just a week ago palace sources were fretting about the optics of a *wheelchair*. pic.twitter.com/8qG70bO94M

Everyone has long touted Andrew as the Queen's 'favourite son', and moments like these are exactly why.

It comes after a February 2021 The Mirror report that she allowed Andrew to keep his Vice-Admiral title to 'cheer him up', despite being stripped of his other military roles.

That same month, it was also reported that the monarch had financed his defence in the civil case filed by Giuffre.

Many critics say the Queen has not taken enough action against her disgraced son, and the optics are disastrous for the entire British crown.

In recent months, the Queen has been 'future-proofing' the monarchy.

She ended speculation about Camilla Parker Bowles' future title by declaring it is her "sincere wish" for Camilla to be 'queen consort' when Charles becomes King.

Unfortunately, she hasn't learned that the issue of Andrew cannot be so easily swept under the rug.