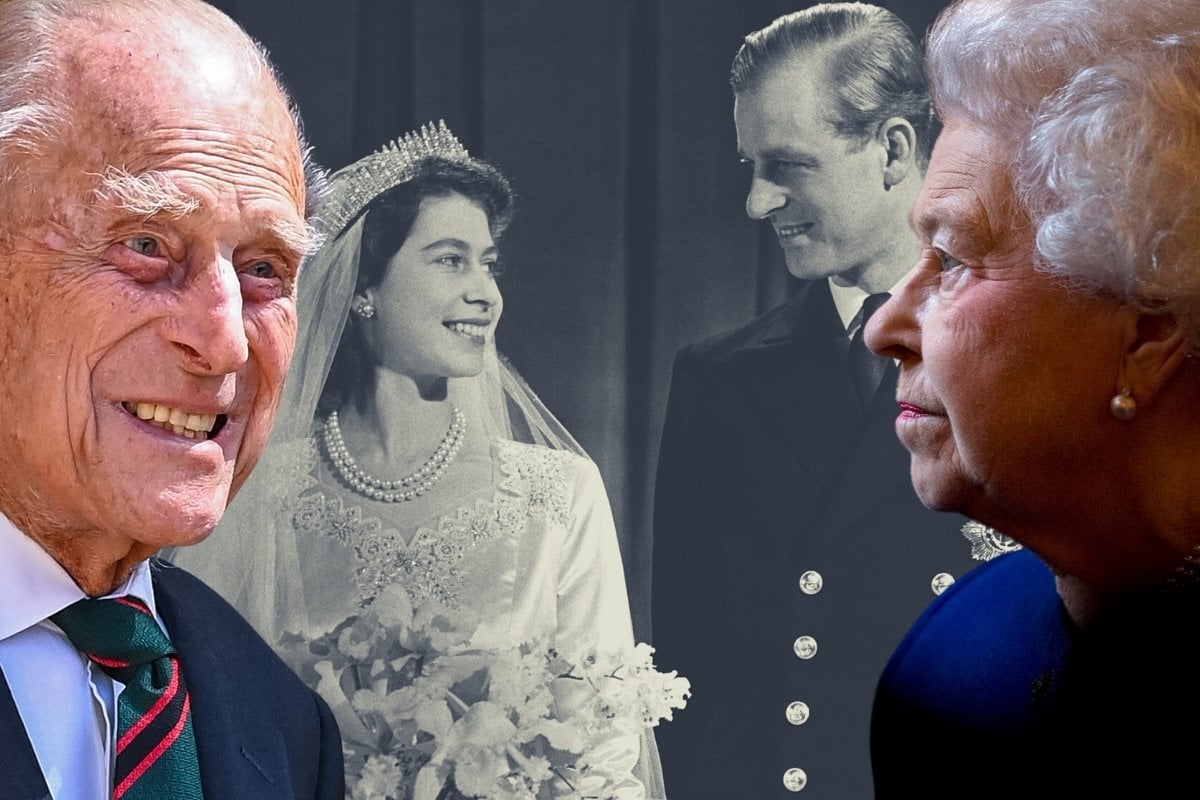 On July 22, 1939, 18-year-old Prince Philip of Greece and Denmark sat down to lunch at the Royal Naval College at Dartmouth.

The towering naval cadet been invited to dine with members of the British royal family. Among them was his third-cousin, a reserved 13-year-old girl they called 'Lilibet'.

The teens had crossed paths twice before; at the 1934 wedding of Prince George, Duke of Kent, and at the coronation King George VI in 1937. But by multiple accounts, the girl was fascinated by him that summer day. Though the prince paid her "no special attention", the girl's governess said she "never took her eyes off him."

Fourteen years later, that girl became Queen Elizabeth II, the sovereign leader of Great Britain and the Commonwealth, then more than one-fifth of the global population.

Throughout her record-breaking reign, that same towering prince has been beside her, or at least — as protocol dictates — one step behind.

Prince Philip and Princess Elizabeth's courtship was one conducted largely from afar.

With World War II pulling the prince to combat in the Mediterranean and Pacific, he managed only the occasional visit to his cousins at Windsor Castle during periods of leave. In the stretches between, he and the princess corresponded by letter, and affection took hold.

In 1946, he wrote to her, "To have been spared in the war and seen victory, to have been given the chance to rest and to re-adjust myself, to have fallen in love completely and unreservedly, makes all one's personal and even the world's troubles seem small and petty." 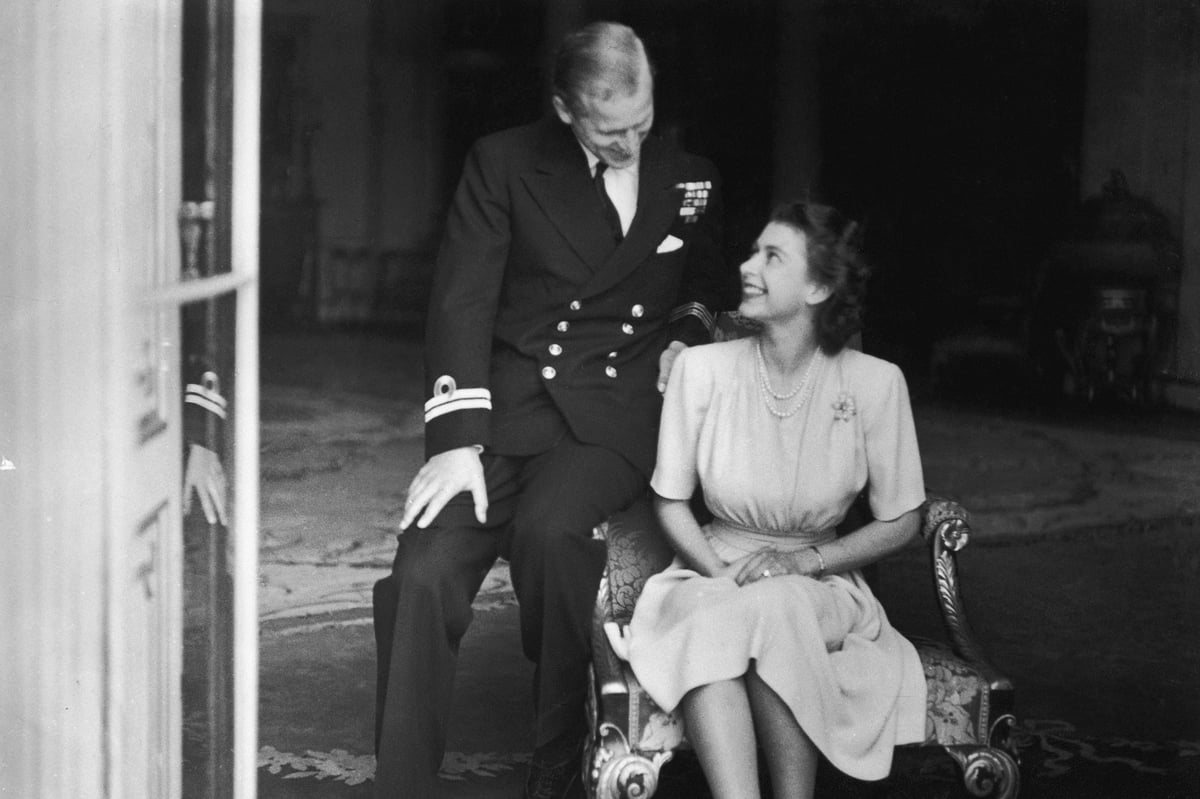 The prince proposed that year, and the princess accepted.

Although, it's broadly reported that there was hesitation about the match from within the court; she, the steady heir presumptive, and he a brash foreigner with little wealth and German ancestry (the prejudice was thick in the wake of the war).

Read more: From princess to nun: How Prince Philip's mother became the 'black sheep' of the Royal family.

The wedding proceeded regardless on November 20, 1947, in a display of ceremony and excess not seen in Britain in years.

The 21-year-old arrived at Westminster Abbey in the Irish State Coach, a 3-carat diamond engagement ring on her finger, 91 choristers ready to serenade her, and 2,000 guests (including heads of state and royalty) waiting to witness the occasion. 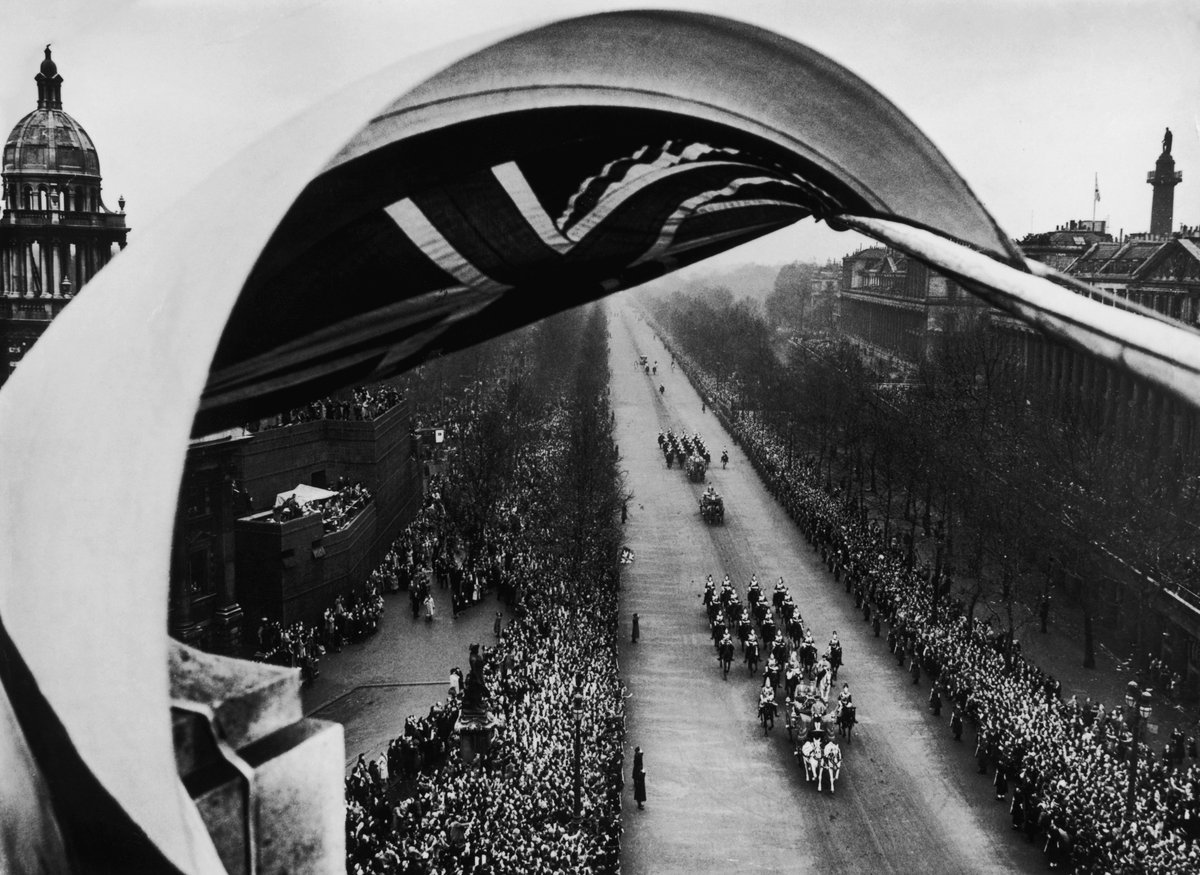 But faint shadows of the war lingered.

Britain was still subject to rationing, and the princess used coupons to purchase the fabric for her Norman Hartnell-designed gown.

Food shortages meant that many ingredients for the 9ft-tall fruit cake were shipped from abroad, including a significant donation from the Girl Guides of Australia that included seven crates packed with sugar, powdered milk, flour, spices and dried fruit.

The ceremony was broadcast via BBC Radio to more than 200 million people around the world, uniting people across seas and borders in celebration.

After the wedding, the couple were bestowed with their new titles: Duke and Duchess of Edinburgh. Though raised in England, Prince Philip had been born in Greece and only secured British citizenship that February ahead of the nuptials. In doing so, he renounced his claims to the Greek and Danish thrones and adopted his mother's surname: Mountbatten. 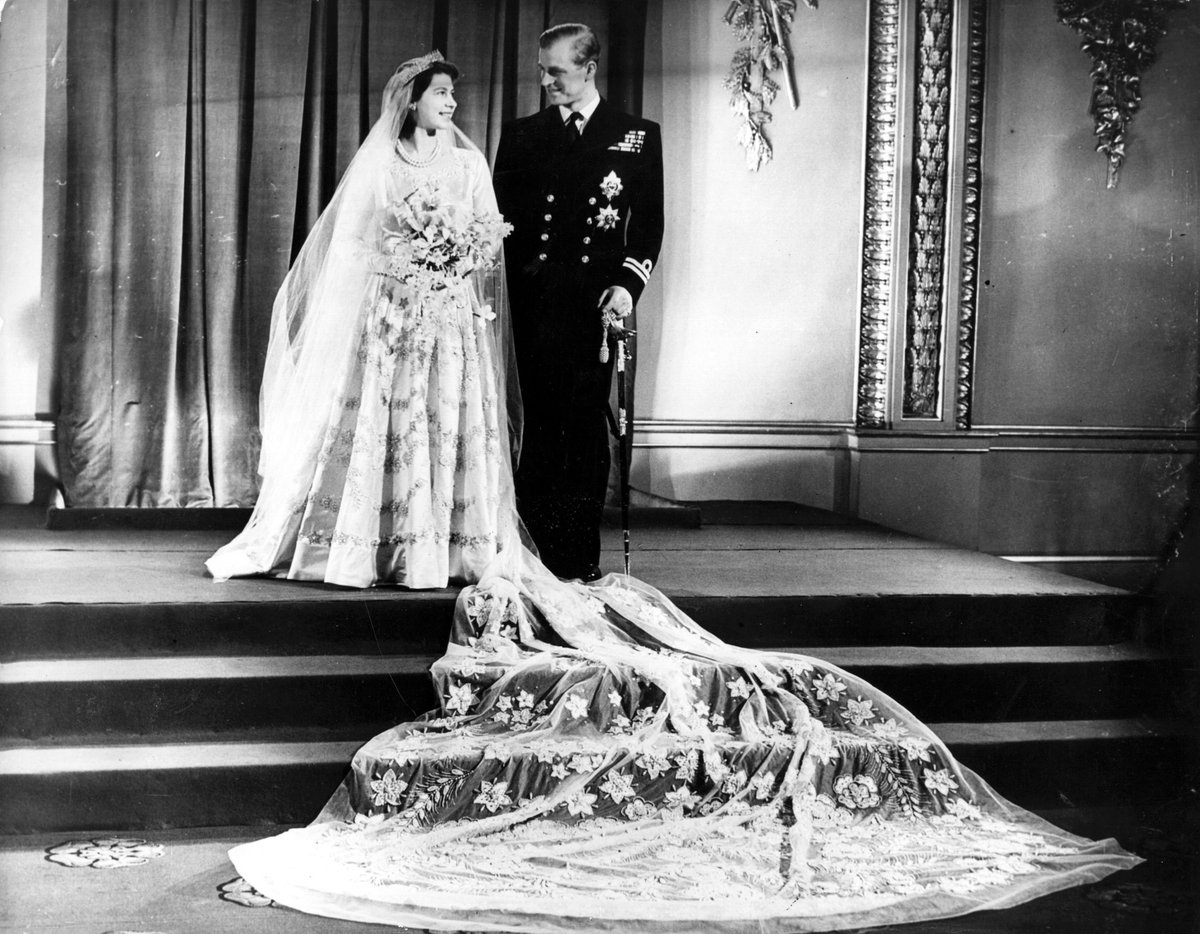 In separate letters to the princess' parents, the newlyweds wrote of their excitement about their future together.

"[We] behave as though we had belonged to each other for years!" the bride wrote. "Philip is an angel—he is so kind and thoughtful."

Prince Philip questioned whether "cherish" was enough to express his feelings toward his new wife.

"[She is] the only 'thing' in this world which is absolutely real to me," he wrote, "and my ambition is to weld the two of us into a new combined existence that will not only be able to withstand the shocks directed at us but will also have a positive existence for the good."

There would be many shocks to come, the first just five years later.

In February 1952, the couple was in Kenya on a Commonwealth tour when the princess' aides received a dispatch from London.

It was Prince Philip who relayed the tragic news to his wife: her beloved father, King George VI, had died due to a blood clot in his heart.

She, the stunned, grieving daughter, at the age of just 25, had acceded the throne.

Queen Elizabeth II was crowned on June 2, 1953, at Westminster Abbey with an audience of millions watching via the new medium of television.

Legend has it that on the day, Prince Philip turned to the newly anointed monarch and quipped, "Where did you get that hat?" 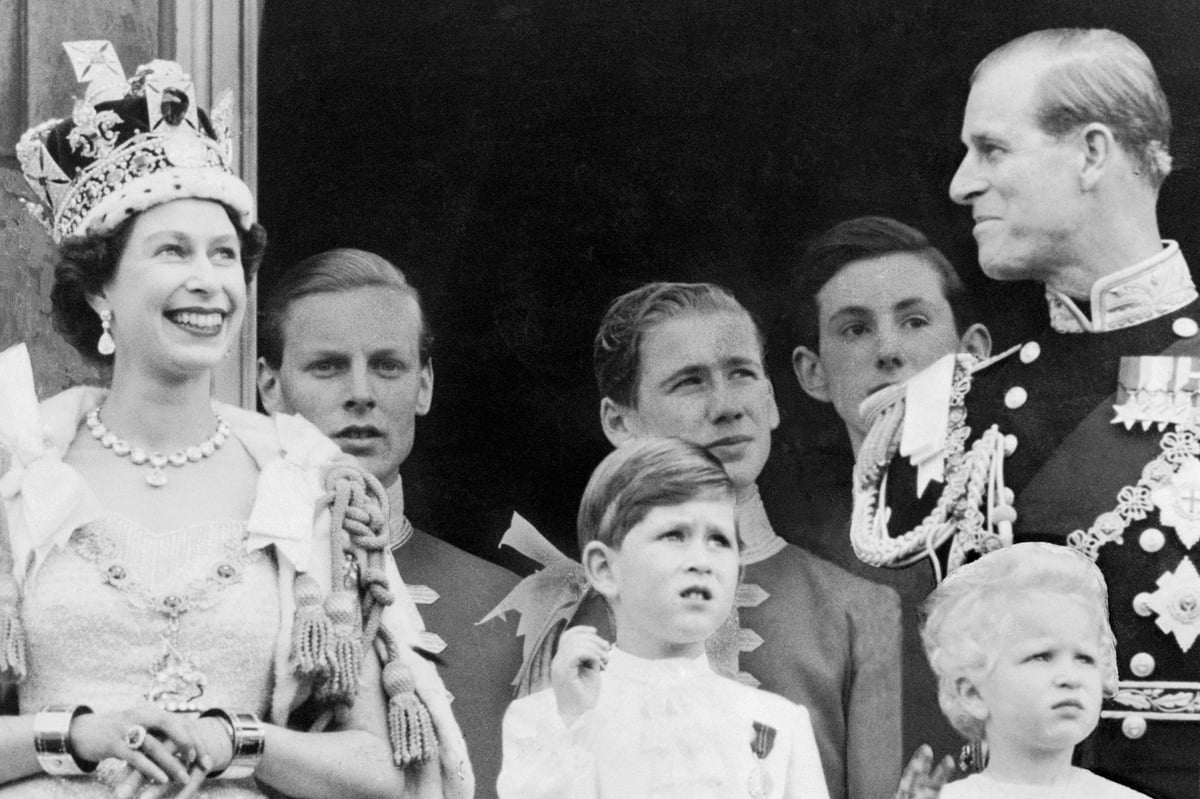 The Royal family on the balcony at Buckingham Palace after Queen Elizabeth II's coronation.

In 2020, the Queen Elizabeth and Prince Philip released a photograph to mark their 73rd wedding anniversary. The picture captured the couple opening a card from young Princes George and Louis and Princess Charlotte.

The three are among their nine great-grandchildren, branching from their four children, Prince Charles, Princess Anne, Prince Andrew and Prince Edward.

The legacy forged for them by the monarch and her husband is one of unprecedented contact with their subjects.

The Queen and Prince Philip travelled widely and often to places never-before visited by their head of state, including Australia.

They were the first to engage with the crowds who flocked to see them in what became known as "royal walk-abouts".

And the first to invite film cameras into their home (the resulting documentary, Royal Family, gave television audiences a one-off glimpse at this family of figureheads, before the footage was locked away in the royal archives). 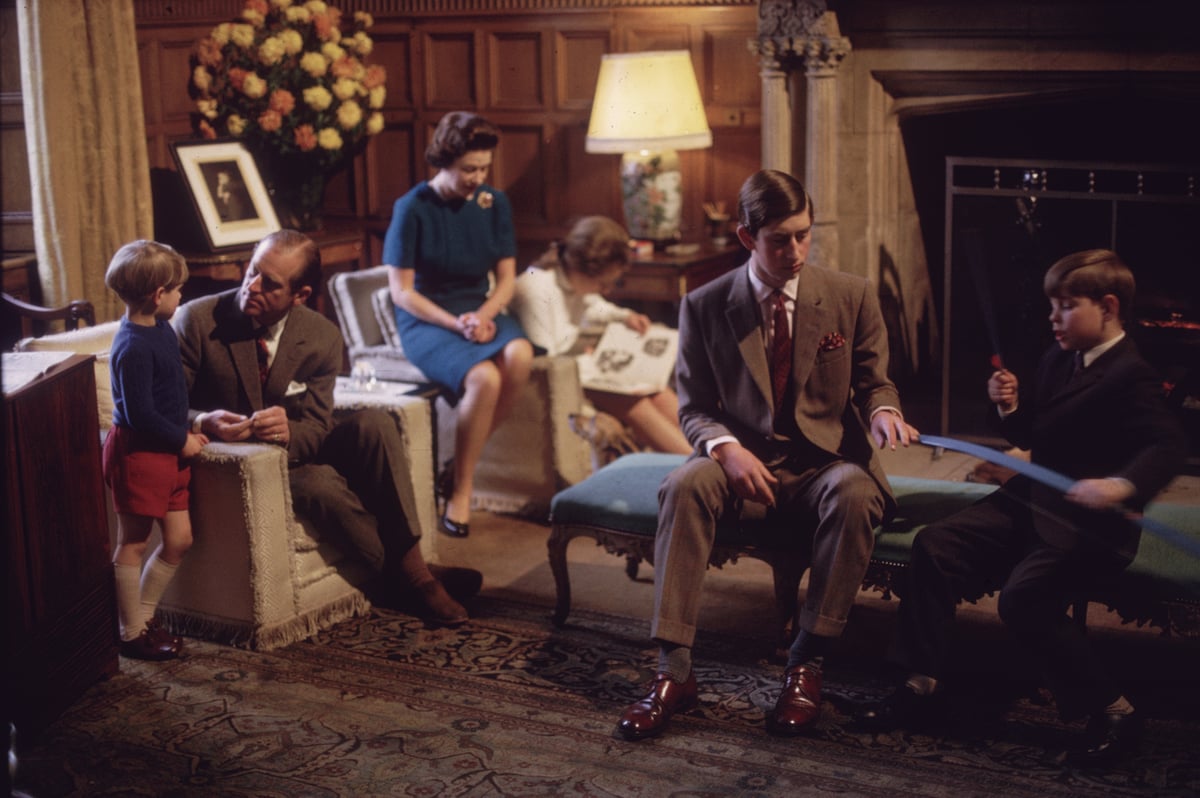 The Royal family at Windsor in 1969. Image: Getty.

But they were also the first to contend with the tabloids.

This was not the distanced, deferential press the crown was used to. And the scrutiny of this new, more brazen breed exposed their flaws — the personal and the institutional — like never before.

As well as stirring persistent rumours of infidelity, Prince Philip is reported to have chafed against his subordinate role.

He is known to have expressed his frustration at being "the only man in the country not allowed to give his name to his own children." Though, the couple presented a united front in taking the issue to the Privy Council in 1960, which declared the Queen's descendants should carry the name Mountbatten-Windsor.

Then, there are Prince Philip's many news-making remarks; some simply close-minded, but others overtly racist and sexist.

(As recently as 2010, during a papal reception in Edinburgh, he was captured gesturing to some tartan and asking Scottish Conservative leader, Annabel Goldie, "Do you have a pair of knickers made out of this?")

But of all the events to define their lives together, as a couple, as parents, as leaders, it's those of recent decades that seem most likely to stick. 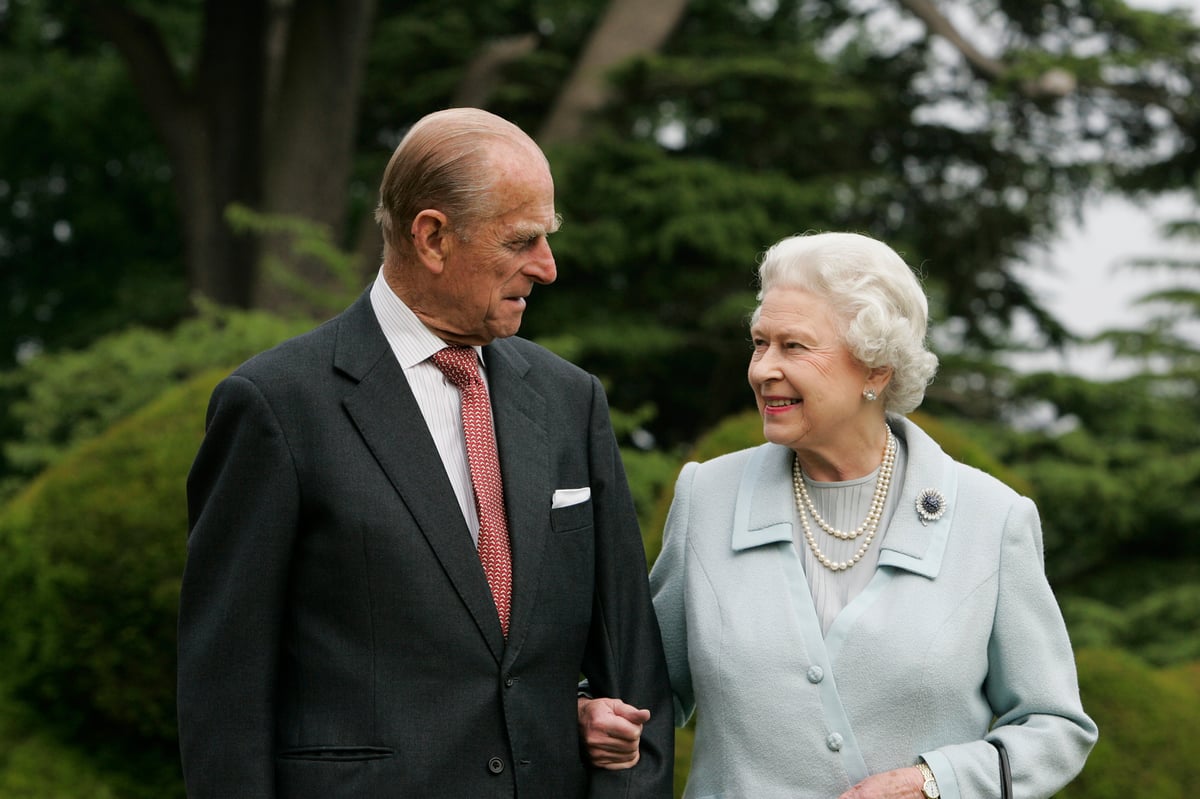 The highly public breakdown of their eldest son (and heir)'s marriage to Princess Diana, and revelations about their apparent affairs.

The subsequent car-crash death of the paparazzi-hunted princess, and the intense anti-monarchist sentiment that followed.

And the rejection of Royal life by one of people who looked set to reinvigorate it: their grandson, Prince Harry.

Each revived the debate about the virtues of the ancient, and many would argue, archaic institution. Yet each time it withstood.

At the helm is the only sovereign most have ever known, the only to have celebrated a diamond wedding anniversary.

She and Prince Philip dutifully performed the various (and often tenuous) functions of the monarchy throughout their seven decade marriage. But the marriage itself was what performed perhaps the most essential.