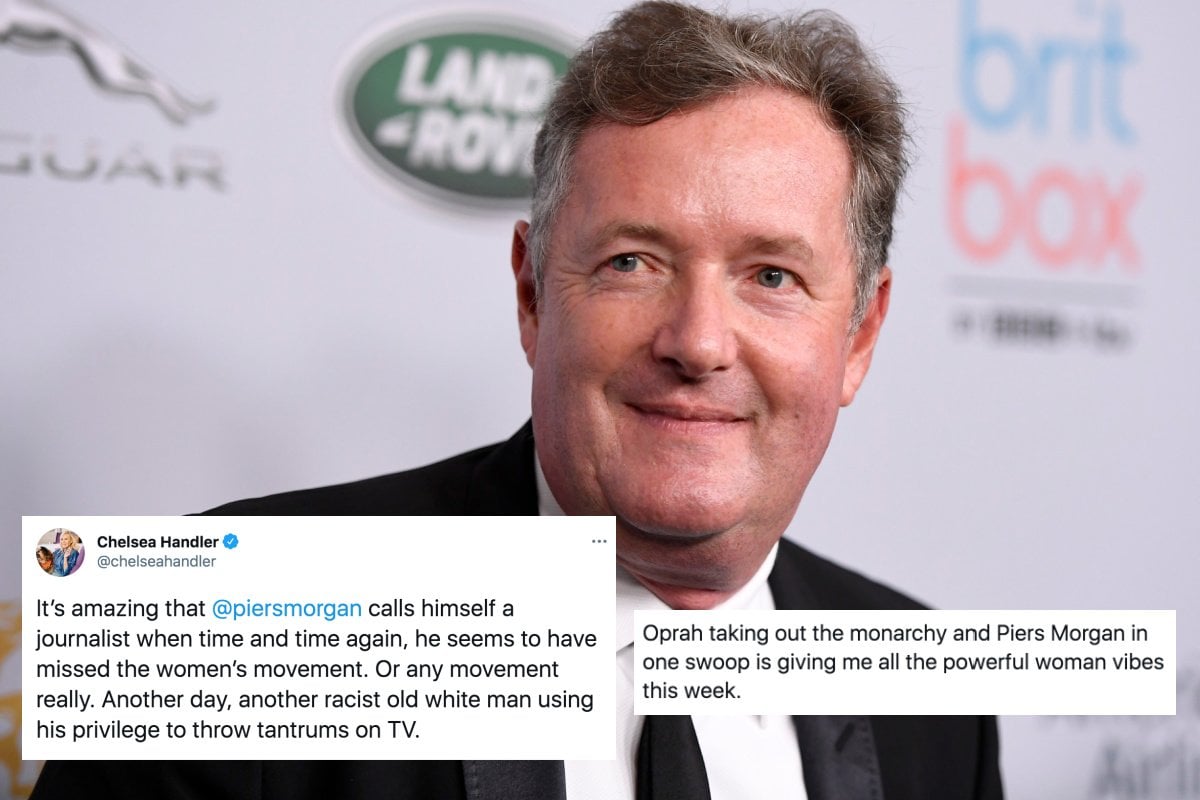 On Monday's episode, Morgan and his co-hosts discussed Prince Harry and Meghan Markle's tell-all interview with Oprah Winfrey. And during the conversation on-air, Morgan disputed Markle's claims she went to Buckingham Palace for help, after she started experiencing suicidal thoughts.

"Who did you go to?" he said. "What did they say to you? I'm sorry, I don't believe a word she said, Meghan Markle. I wouldn't believe it if she read me a weather report."

In response, Morgan's co-host Alex Beresford called out his ongoing attitude towards Markle.

Morgan then stormed off the show's set.

Following Monday's episode, ITV faced enormous criticism, and later that evening, they released a statement announcing Morgan would not be returning to the breakfast show.

"Following discussions with ITV, Piers Morgan has decided now is the time to leave Good Morning Britain," the statement read.

Piers Morgan has appeared to have an issue with the Duchess of Sussex for many years now.

Since 2018 - when he wasn't invited to the couple's wedding - he's made comments about Markle both in articles and on-air. So this news announcing that he can no longer get away with these remarks, was sweet relief for many.

It’s amazing that @piersmorgan calls himself a journalist when time and time again, he seems to have missed the women’s movement. Or any movement really. Another day, another racist old white man using his privilege to throw tantrums on TV.

I almost killed myself a year ago because of Piers Morgan’s relentless campaign of lies and hatred against me last February. I’m glad I’m still alive today for many reasons. But watching him leave GMB today is right up there and has me feeling: pic.twitter.com/reygXIMhP9

This Piers Morgan situation is the perfect example of what happens to a woman when they reject a man and I think people need to stop downplaying how a simple rejection can end up in harassment and even murder. We’ve seen it happen before.

The best part of the Piers Morgan self-destructive meltdown is that the co-host who called him out on live TV was calm, methodical and thoughtful while also being completely savage. It was a masterclass on how to take down a bully.

Even if the only thing the Oprah interview accomplishes is Piers Morgan quitting his show, that will still be a win.

Piers Morgan dragged Meghan for years and he never took a step back. Less than 24 hours of having to deal with 1% of what she went through and he had to leave his show and resign. THE KARMA. pic.twitter.com/NCBdH1y5zv

Meghan Markle ghosted Piers Morgan after one dinner. Lived in his head rent free for years. And then got him fired without even trying. This is epic talent.

Did I read correctly that #piersmorgan is leaving GMB? Today is a good day indeed pic.twitter.com/PhZneeaz8b

Oprah taking out the monarchy and Piers Morgan in one swoop is giving me all the powerful woman vibes this week.

Im just waiting for someone to edit @piersmorgan walking off the GMB set to the song Keep Me Hanging On.

They came and they conquered. Another one bites the dust#piersmorgan

going to start a petition to get @piersmorgan taken out of home alone! pic.twitter.com/GIM7M5JRCD

A great day for everybody except @piersmorgan ✨

Reply
Upvote
2 upvotes
Sadly, I doubt this will be the last we see from Piers, he'll find some other mob who will hire him because controversy gets you talked about and any publicity is good publicity.
I do have to wonder if he actually believes all the things he says, was he really that upset that a bakery chain released a vegan sausage roll? Or is he just a shit stirrer who likes the attention he gets from his comments? Either way, a chat with a therapist wouldn't be a terrible idea. Oh no, wait, he would probably find that emasculating, like the time he saw a picture of Daniel Craig carrying his baby in a Baby Bjorn, and seemed to think it was the end of the world. (Poor Mrs Piers, how much do you want to bet he never changed a nappy or did a night feed?) What a sad dinosaur of a man he is.
C
chrissyinthemiddle a year ago

Reply
Upvote
1 upvotes
@rush I agree. I believe that he’ll just pop up somewhere else.
R
rush a year ago

Reply
Upvote
2 upvotes
@chrissyinthemiddle I don't for a second believe it was a spur of the moment thing, I'd bet money that he already has something else lined up.
C
cat a year ago

Reply
Upvote
@rush oh he was totally fired, it wasn’t his decision.
I’m not sure where he has left to go- burnt his bridges with the Murdochs so that rules out most newspapers and those 40,000 complaints will keep him off TV for a while. Do they have horrible radio shock jocks in the UK like we do?
T
talezassian a year ago