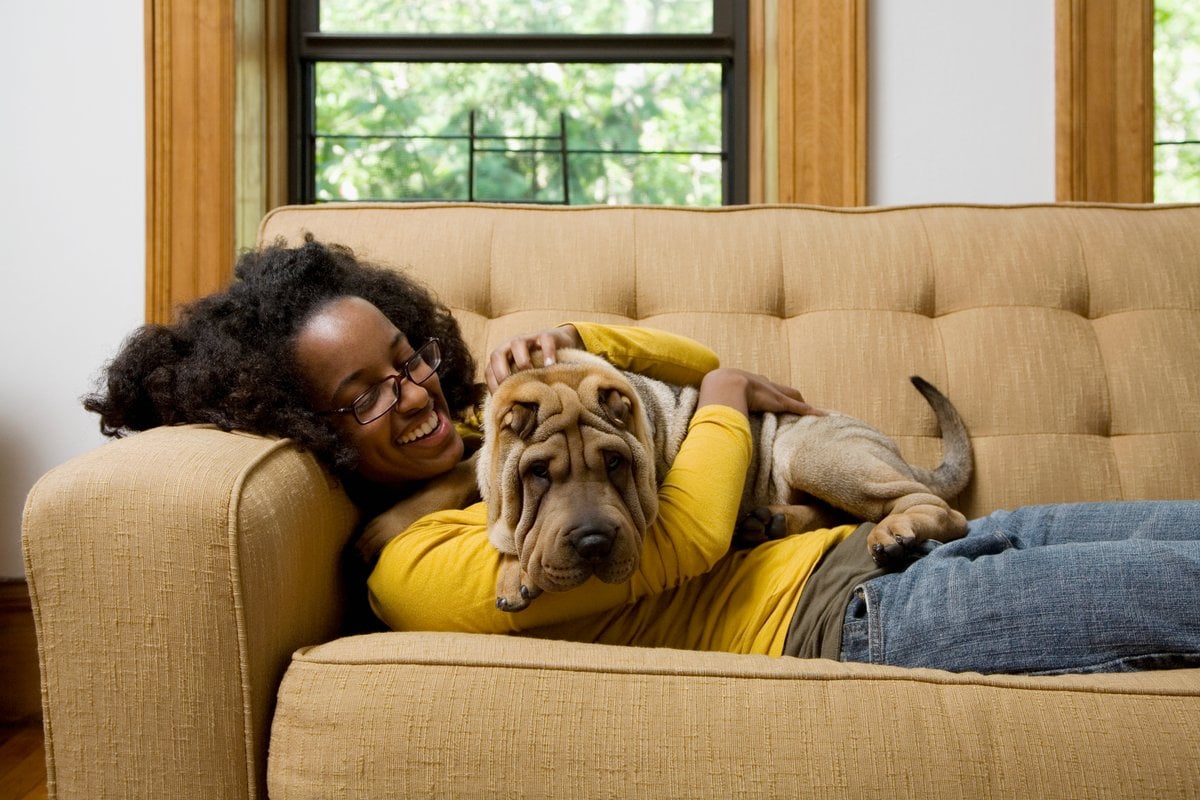 It’s okay if you read the headline and cried. We did too.

Yes, we may be on the emotional-edge following a year of bushfires, lockdowns and the ongoing threat of a global pandemic, but there is GOOD NEWS to be shared now - so you can bet your bottom dollar we are going to be shouting about it. (And then crying tears of pure joy shortly after.)

A massive decision made in the Court of Appeals now means that pets are officially allowed in every single apartment in New South Wales.

Permission for your face to do exactly this:

The momentous court decision came as the conclusion to a four-year-long battle between Jo Cooper and her ‘Horizon’ apartment building in Darlinghurst.

Jo was determined to win the right to keep her miniature schnauzer in her unit, despite her building having a ‘blanket ban’ on pets. As you may have cottoned-on, Jo won her fight and now there is an actual law in place to stop apartment blocks from placing bylaws to ban pets.

We’d like it to be stated for the record that Jo’s miniature schnauzer’s name is Angus, and Angus is now the ambassador for all floofs across NSW.

So what is the fineprint surrounding pets in apartments now? You know, before we all run out to the RSCPA and grab the furry friend we’ve been longing for.

Well, the unanimous court decision (made by three judges) means that no building in the state of New South Wales can put out a ‘blanket ban’ of pets. However, there still can be sneaky side-dish restrictions put in place by strata, which can restrict more specific things like ‘barking dogs’ or ‘six hundred cats’.

BUT, this is still a huge win!

Now this new beloved law means that things can only be changed if a case opposing the legislation gets taken to the high court. Which could happen, for sure. But for now, GRAB YOUR PUPPERS AND CELEBRATE.

G
gypsy 2 years ago
Reply
Upvote
3 upvotes
A house, for the landlord, is not always an investment in the way it is implied ie. they have multiple homes. My daughter became a single mother, moved back home for support and rented her beautiful house. Then our clever PM decided that during the Pandemic people like her can become ‘public housing’ of course all landlords are rolling in it. I didn’t hear him suggest to the supermarket giants that every 4th item bought by people is given free. How on gods earth would some of the private owners cope with no rent. That is the government’s responsibility not any Joe in the street. He had no right to encroach on people’s personal finance arrangements unless he was going to make up the shortfall.Tenants need to start appreciating their landlords because if they didn’t purchase the home they wouldn’t have a home to rent.
M
mamamia-user-482898552 2 years ago
Reply
Upvote
4 upvotes
@gypsy Exactly. I rented my home out while I was living overseas, but with every intention of moving back - so I cared very much about who my tenants were and how they treated my home. As someone who rented for a long time before I could afford to buy, I am sympathetic to the desire to make a rental property more "homely", but at the same time, I think there needs to be safeguards for landlords to be able to protect their property and adequately sue for damage. Withholding bond often wouldn't be enough to re-carpet a home that's had pets pee and poop inside, for instance.
G
gypsy 2 years ago
Reply
Upvote
3 upvotes
@mamamia-user-482898552  The bond often doesn’t cover the total cost to the landlord particularly if you have an arrogant tenant (unfortunately there are plenty of those) they stop paying the rent at the end of the lease to absorb the bond. You can still take them (NSW) to the Dept Fair Trading Tenancy tribunal to recover outstanding costs they have created. I was forced to do it once, it didn’t cost much at all to register and I won on all my 5 points. All of my claim was paid to me including the bond, approx $3,700. There was a tenant advocate there but no landlord advocate. Immediately an inequity. She started out a good tenant but then her boyfriend left her and apparently I was supposed to support her from then on. I buy houses all the time for charity joke joke. They just don’t get it.
C
cat 2 years ago
Reply
Upvote
1 upvotes
@gypsy real estate agents are landlord advocates. And the tenant advocates are provided by the tenants union, they are completely independent of the system. It’s not unfair, landlords are welcome to create a union and organise advocates.
I had to take a landlord to the tribunal to recover the rent for the two weeks the property didn’t have electricity. The owner apparently didn’t agree that being without power made the house uninhabitable, and tried to make us pay for those weeks because he didn’t want to have any weeks where the cost of the house wasn’t covered. I guarantee that for every bad tenant story you can find, I can find at least ten examples of landlords behaving like the absolute scum of the earth.
G
gypsy 2 years ago
Reply
Upvote
2 upvotes
@cat No Cat an agent is not a landlord advocate and definitely not in my situation as I always self manage. I don’t think Real Estate Agents are much chop but that is for a different day. The tenant advocate is funded by Depart of Fair Trading not by tenants, so my comment about inequity still stands. As I said I won on all points and the Advocate told her she did everything wrong. Would you have expected me to just let her live there for nothing? Also causing strife to the premises as she didn’t abide by her own agreement. I have always met my repair responsibilities and many of my tenants say they much preferred dealing directly with me rather than through an agent, they can be slow. I always treat people fairly but they use you and your property and don’t abide by the terms of the lease. No one is making them sign up they are often begging, say all the right things and dupe you. Pets just add to the potential problems and seeing the owner is left with the problem it should be their call.
L
laura__palmer 2 years ago
Reply
Upvote
2 upvotes
For a landlord, a house is an investment, for the renter, it is their home. As home ownership is now out of reach for so many Australians, partly because of landlords hoarding properties and using a basic need as a way to make bank, I think some rules need to be put in place so that renters can make a home, including allowing pet. Pets can help make a home. Agree wholeheartedly with this.

On a side note, I also think that landlords should have to undergo a full inspection of their property before being allowed to rent it out, and there should be a standard that must be adhered to before being allowed to rent it out. Adequate heating, insulation, plumbing, mold issues taken care of, etc so that they aren't renting out hovels.
R
random dude 2 years ago
Reply
Upvote
@laura__palmer Regarding your second paragraph, I've had to rent some of these hovels in the past. It was the only thing I could afford at the time.
Regulating this merely adds to the costs of the tenant - you believe the owner is going to wear the extra expense and not pass it on?
G
gypsy 2 years ago
Reply
Upvote
5 upvotes
@laura__palmer Absolutely no doubt that a home for lease should meet a good livable standard but it should also be returned to the owner in the same good livable standard and very often they are not. The pet component in that equation only exacerbates what is already a problem. Tenants can be a problem, then owners lose a lot of value off their home. Some people live like pigs so I guess if they keep a pet pig it won’t make much difference. If you had to pick up the bill Laura you might see it differently. I am surprised sometimes that the investors don’t give up investing in property. Then you might find there is a shortage as the government doesn’t provide.
L
laura__palmer 2 years ago
Reply
Upvote
2 upvotes
@random dude Regulating this would mean that less people would be using housing as an investment, which would, arguably, bring housing prices down.
Also, maybe we need a regulating body who sets rent prices, so that people aren't gouging those who need a roof over their head. It really is geared towards the investor at the moment, and that is just wrong when you are talking about a basic need. No one should have to live in a hovel.
L
laura__palmer 2 years ago
Reply
Upvote
2 upvotes
@gypsy It would be great if investors stopped buying up property they can't afford and that they get a disadvantaged person to pay off for them. If housing was treated as a basic need and a human right, then more might be able to afford it

The whole industry needs regulating so that people can afford to buy their own homes and so that landlords are held accountable for what they are renting out. And the government needs takes providing low income housing a little more seriously.
My opinion will always be that the tenant and their right to make a home will come above those of a landlord. Landlords have to expect wear and tear and have to account for that when considering renting out a property. They also are able to set a bond to recover costs. Most people do the right thing, anyway, and should not be punished for the few who don't

I would never, ever invest in private real estate. I don't believe in making money off human beings requiring shelter. And, as a home owner, I don't care if housing prices come down so that others can have the same, even if it means my house isn't worth as much as it is.
So, you are never going to convince me that I should be on the side of landlords. Because I never will be.