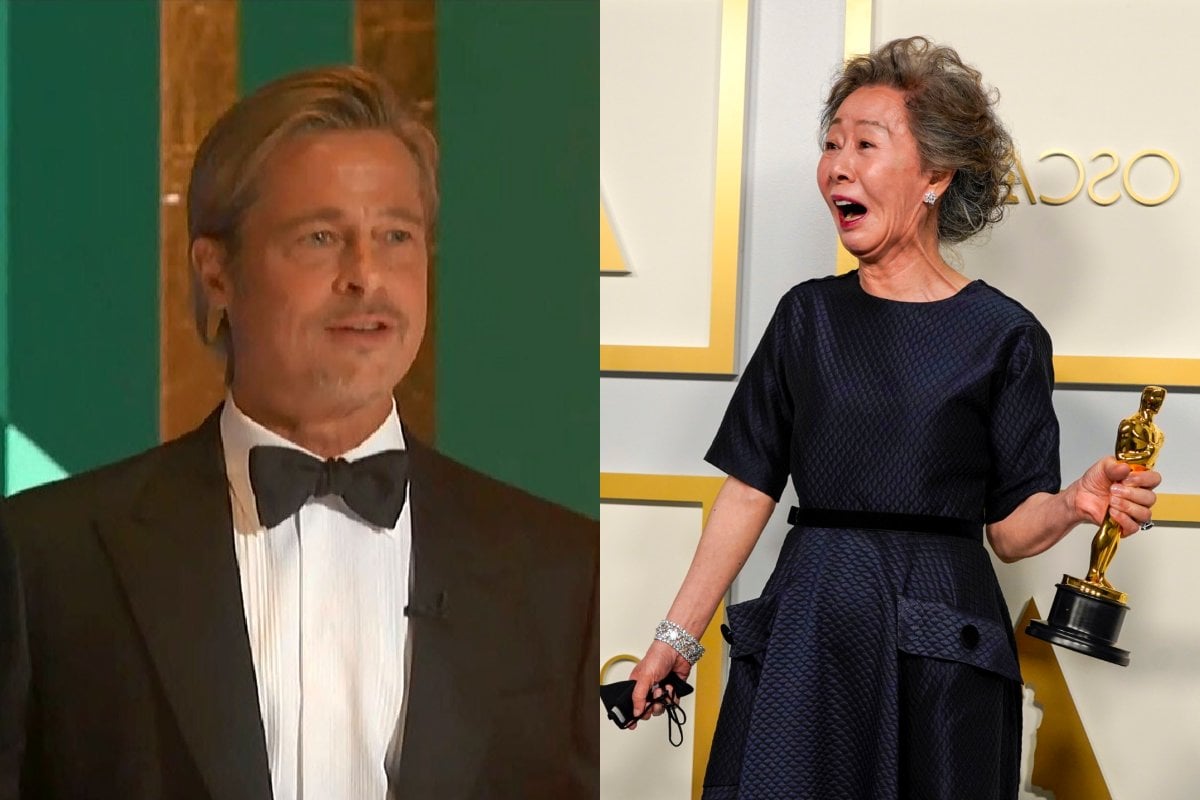 It was a bleak year with no international travel, no celebrities having cute lil' encounters backstage, and no inspirational speeches.

But now they're back.

I mean, we're still on the couch, eating UberEats and re-watching The Office, but this is a start.

This year's ceremony could be described as Oscars-light, and it feels a little bit like a high school graduation ball, but I like it.

Here are the biggest moments from the 93rd Annual Academy Awards:

Emerald Fennell aka Camilla Parker Bowles aka Nurse Patsy from Call The Midwife wins for Promising Young Woman, and so she bloody should considering she filmed the movie over 23 days while she was seven months pregnant.

"He's so heavy, and he's so... cold," she says at the beginning of her speech about the little gold man named Oscar.

Fennell goes on to say that she hasn't prepared a speech but she did look over one she'd written when she was 10 years old.

It was mostly about her thanking Morris from Saved from the Bell who was her imaginary boyfriend at the time.

Read: Emerald Fennell was talking to her male friends when she came up with Promising Young Woman.

Mia Neal and Jamika Wilson become the first Black women to win the Oscars for makeup and hairstyling.

In a historic first, Mia Neal and Jamika Wilson become the first Black women to win the Oscars for Best Makeup and Best Hairstyling for their work on Ma Rainey's Black Bottom.

Neal says she was happy to have "broken the glass ceiling" in the category and hopes they're the first of many Black women to accept the award.

The film also wins the Oscar for Best Costumes.

Daniel Kaluuya announces his parents had sex once.

Daniel Kaluuya wins the Oscar for Best Supporting Actor for his role in Judas and the Black Messiah.

In his speech he thanks his parents saying... "My mum, my dad, they had sex, I'm here!"

Here's Daniel Kaluuya's mom and sister reacting to him saying "My mom and my dad...they had sex. It's amazing! I'm here!" at the end of his Oscar speech pic.twitter.com/4nLZxY0Jwc

Incredible that we get to see the real-time reaction from Daniel Kaluuya’s mother as he talks about his parents having sex pic.twitter.com/juxCZeJcQC

Read: From Promising Young Woman to Nomadland: Exactly where to watch this year's Oscars nominees.

Chloe Zhao becomes the first woman of Asian descent and the second woman in history to win Best Director for her film, Nomadland.

“This is for anyone who has the faith and the courage to hold out for the goodness in themselves and each other, no matter how hard it is to do that," Zhao said in her acceptance speech.

“This is for anyone who has the faith and the courage to hold out for the goodness in themselves and each other, no matter how hard it is to do that.” ~#Oscars2021 Best Director #ChloeZhao for “Nomadland.” ❤️#Oscars pic.twitter.com/3aPfYQKiKu

The film is also tipped to win Best Picture. You can read about how Nomadland became the Oscars frontrunner here.

Sound of Metal takes out the Oscar for Best Sound.

Riz Ahmed comes on stage to announce the winner for Best Sound and the winner is... Riz Ahmed.

Well, Sound of Metal, the movie Riz starred in.

I'd just like to take this moment to remind everyone about Riz Ahmed's face... and also... his voice. 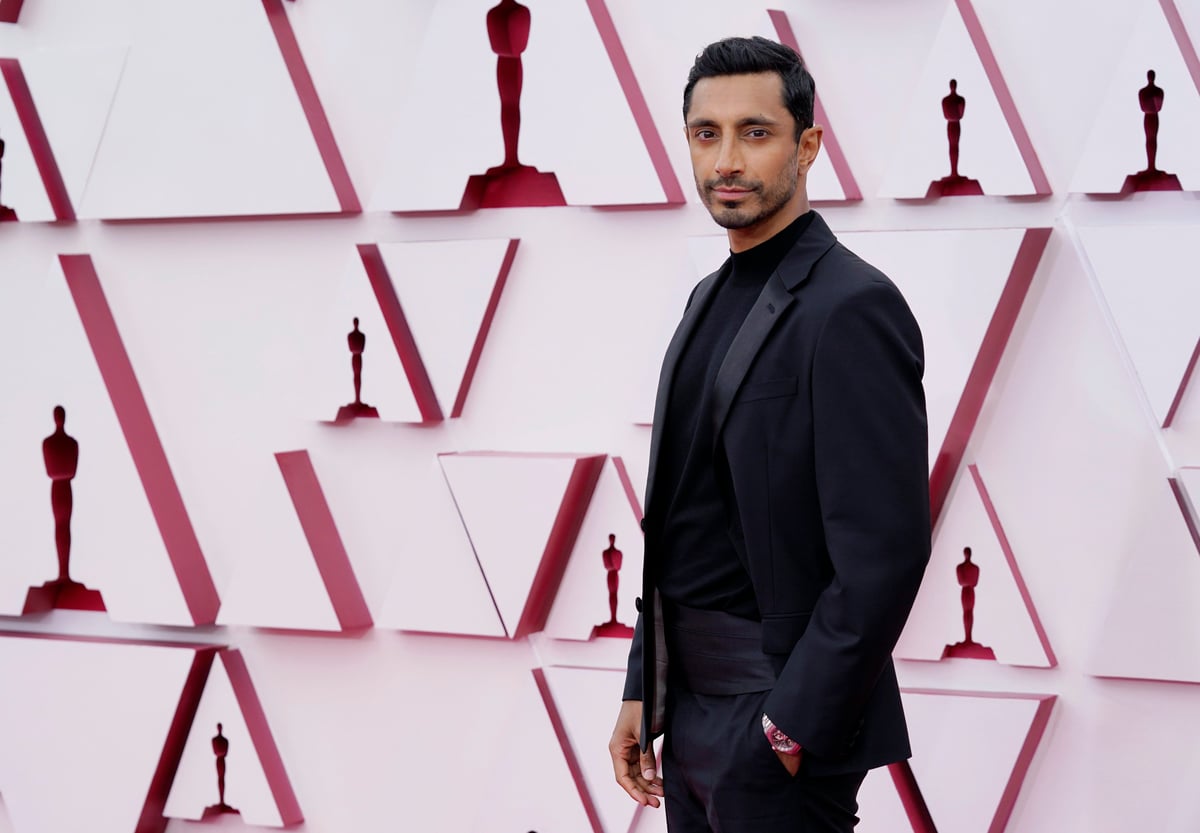 The powerful message behind the Live Action Short winner.

The short film tells the story of a Black man stuck in a time loop, where every day he dies at the hands of a police officer.

"And those people happen to be disproportionately Black people and James Baldwin once said the most despicable someone can be is being indifferent to someone else's pain. So I ask you not to be indifferent, don't be indifferent to our pain."

A man in love with an octopus wins an award. 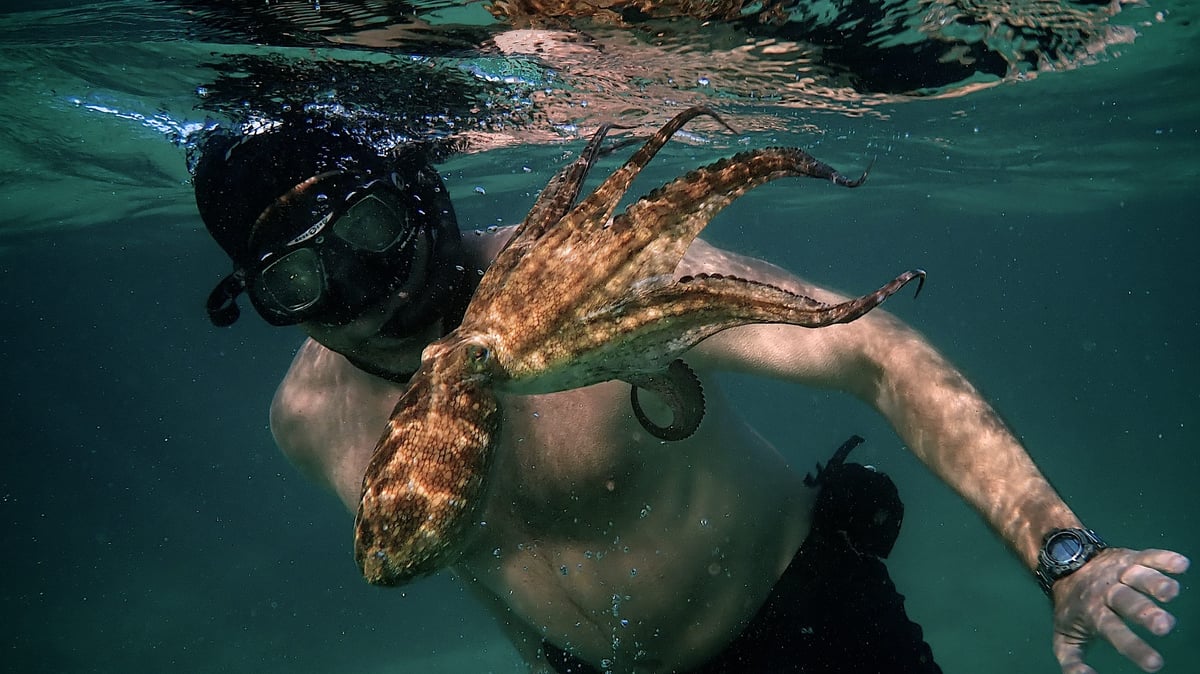 The most surprising love story of our time. Image: Netflix.

My Octopus Teacher, the documentary about a man who develops an intense relationship with an octopus, wins Best Documentary Feature.

I just know, deep down in my heart, that the octopus would be proud of him.

Read: This documentary about a man falling in love with an octopus is exactly what we need in 2021.

Brad Pitt made a lil' cameo presenting the award for Best Supporting Actor.

He has long hair now and no, he's not back with Jennifer Aniston. 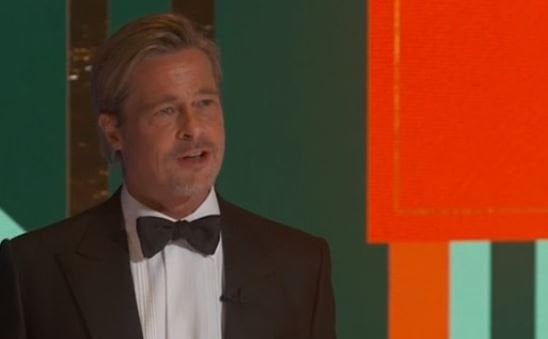 He handed out the Oscar for Best Supporting Actress to first-time nominee Youn Yuh-jung for Minari.

The 73-year-old said, "Mr Brad Pitt, finally!" as she accepted the award from him.

She then thanked her sons for "making me go out and work".

Yuh-jung is the first Korean woman to ever be nominated and win Best Supporting Actress.

Harrison Ford reads out the reviews from "some movie he was in".

Harrison Ford pulled a classic Harrison Ford move reading out the "editorial suggestions" he received after a public screening of "some movie" he was once in.

"Opening – too choppy. Why is this voiceover track so terrible? He sounds drugged. Were they all on drugs? The piano is interminable. Flashback dialogue confusing – is he listening to a tape? The movie is deadly dull. This movie gets worse every screening," he said.

Then he dropped the mic with this line: "That movie was called Blade Runner."

We don't give the man enough credit.

Glenn Close did... the butt.

She may not have won an Oscar but Glenn Close did win our hearts for this awkward butt dance.

Comedian Lil Rel Howery went into the audience to ask the stars some lighthearted Oscars trivia.

Playing a few lines of Prince's classic 'Purple Rain', he asked nominee Andra Day to pick whether the song won an Oscar, was nominated, or wasn't nominated at all.

"It probably wasn't nominated, and that's some bulls**t," she replied.

"The score won the award but none of the songs from the score got nominated," Howery told her.

"That sounds about right," she said as he quickly ran away.

And the best picture goes to... Nomadland.

In news that will surprise precisely no one - Chloe Zhao and Frances McDormand's Nomadland took out the Oscar for Best Picture.

"Please watch our movie on the biggest screen possible and very soon take everyone you know to see every one of these movies," McDormand said.

"This one is for our wolf," she continued before... howling.

McDormand wins Best Actress for her role in Nomadland.

In a classic McDormand move, she has no time for bullsh*t and delivers the shortest speech in Oscars history.

"Look they didn't ask me.... but we should have had a karaoke bar," she began her speech.

"The words are in my sword. My sword is my work. And I love work," she concluded.

The ENTIRE ceremony was rearranged so the Best Actor award would be the final award of the night.

It made sense. Chadwick Boseman, who passed away last year, was tipped to win the award, so they wanted to finish the night with a touching tribute.

EXCEPT... the award went to Anthony Hopkins instead.

I HAVE SO MANY QUESTIONS.