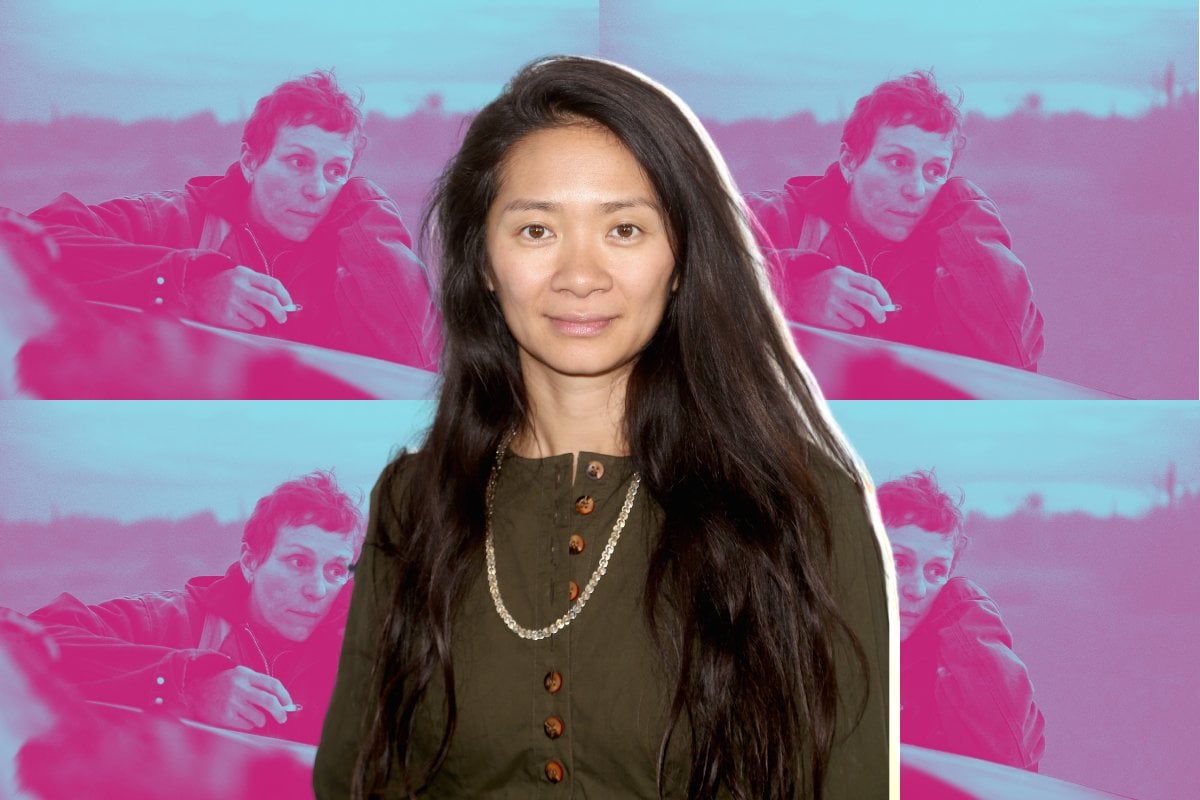 There's a scene in Nomadland where Frances McDormand's character, Fern, s**ts in a bucket.

In another scene, she floats naked in a creek, gazing up at the sky, her arms flung wide, as she takes in the sheer enormity of the world.

These two scenes sum up what Chloe Zhao's Oscar front-running film is about - the brutality and beauty of life.

How life can literally or figuratively throw a bucket of s**t at you but you can still find joy and brilliance in the people and world around you.

How you can adapt and learn how to survive.

The film, which was written and directed by Zhao, has been nominated for a bunch of Oscars including Best Picture, Best Director, Best Actress, Best Adapted Screenplay, Best Cinematography and Best Editing.

It's based on Jessica Bruder's 2017 non-fiction book Nomadland: Surviving America in the Twenty-First Century. While writing the book, Bruder travelled around America spending time with the country's new breed of 'nomads' - people who had been left homeless or unemployed after the Great Recession, so they hit the road and began living off the grid.

When Zhao took on the project of turning the book into a film, she hired many of the real life people featured in the book to play themselves in the movie. There's grandmother Linda May, who dreams of settling down one day and building an "Earthship", 65-year-old Bob Wells who is the founder of Rubber Tramp Rendezvous, the largest gathering of nomads and van dwellers in the United States. They star alongside 78-year-old Charlene Swankie, who plays Swankie in the movie. Swankie has been living on the road for over a decade.

It's hard to tell how much of their storylines and dialogue is real and how much is scripted as Zhao craftily blends fact with fiction.

The only fictional character in the film is Fern, but given McDormand's laid-back attitude, earthy essence, and penchant for accepting awards in a denim jacket, she fits in perfectly with this rag-tag group of modern nomads.

Fern, a widow in her 60s, is forced into living a transient life after she loses everything in the recession. She takes on odd jobs to make ends meet, including working at an Amazon warehouse for a period of time. She learns basic survival skills and self-sufficiency from the other nomads who welcome her into their community.

Her story may be fictional, but it encapsulates the story of so many Americans who are living off the grid, and embracing the nomad lifestyle, in order to survive the forever changing political and socio-economic landscape.

The result is a film that feels so real it could almost be a documentary, but also feels so Hollywood, you can lose yourself in it for the almost-two-hour running time.

She was born in Beijing and, like Fern, spent most of her life moving around - from China, to London, New York, the Badlands of Wyoming and finally LA.

She didn't know she wanted to be a filmmaker until well into her adult life, but has enjoyed fast success, while managing to straddle both the indie and blockbuster market.

Listen: Kate Winslet and the one lie Hollywood needs to stop telling. Post continues below.

Her first film, Songs My Brother Taught Me, premiered at the Sundance Film Festival to rave reviews. After Nomadland, she's tackling the Marvel Universe, with Eternals, a big-budget movie currently set for a November 2021 release.

It's Zhao's ability to immerse herself into her current project, no matter the budget or subject matter, and McDormand's ability to slide into an unfamiliar world and make it her own, that makes Nomadland an absolutely unmissable movie.

Nomadland is currently showing in cinemas all around Australia.

Reply
Upvote
1 upvotes
I guess it's a small silver lining in the Covid cloud, isn't it. With all the big money blockbusters having their release dates delayed, the smaller films might get more attention.
G
guest2 a year ago