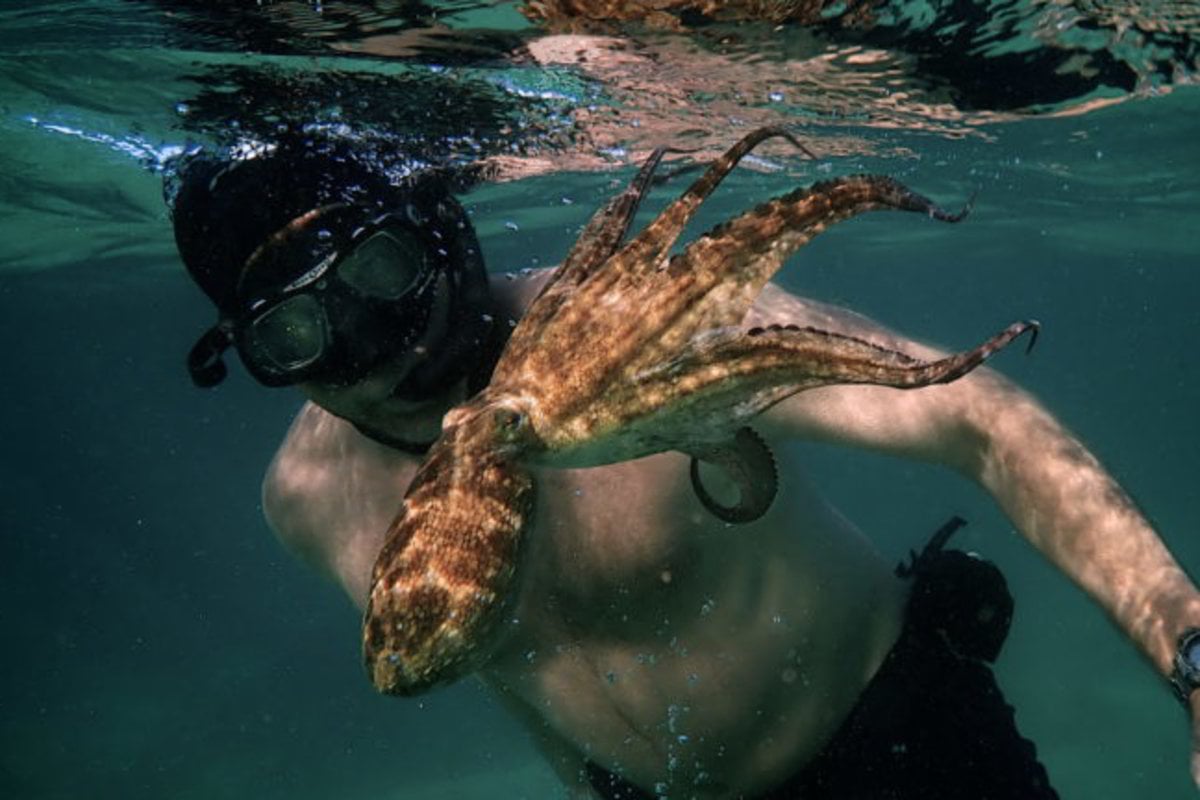 My Octopus Teacher has won the Oscar for best documentary at the 93rd Academy Awards.

I can't pinpoint the exact moment I became heavily invested in the relationship between a South African man and a female octopus.

Maybe it was the first time she touched him with her suction-capped arm.

Perhaps it was when he placed his head in his hands as he recounted the time a shark attacked her.

It could have been when he hand-fed her and watched her slowly heal after the attack.

All I know is by the end of the 85-minute documentary, I was bawling my eyes out and I needed to tell everyone I knew about it.

WATCH: The trailer for Netflix's My Octopus Teacher. Post continues below.

I rushed to my group chats and told them it was imperative they drop everything immediately and watch My Octopus Teacher on Netflix. Trust me, I said, as they laughed at me and concluded that 2020 had finally broken me.

I posted a PSA on Instagram. I only just stopped short of running through the streets of my suburb, asking everyone I saw if they had watched the love story between a middle-aged man and a sea-dwelling creature yet, and if so, would they like to have a three-hour conversation about it?

Over the next few days, I watched as more of my friends and colleagues, and random people I follow on social media, recommended the documentary themselves.

Oh they know, I whispered to myself, they understand. They get it.

That's the impact My Octopus Teacher has on you.

In 2010, Foster, severely burnt out and suffering from adrenal fatigue, began free-diving in the waters off the Western Cape of South Africa, where he lived.

He was searching for something to give his life meaning, to shake it up, to make him feel alive again.

Then one day during his dive, he found what he was searching for in a small, speckled, purple octopus.

When he first saw her she was crouched at the bottom of the seafloor. She had covered her tiny body with shells and other ocean debris in an attempt to camouflage herself and hide from predators.

As soon as she saw her opportunity, she pushed herself off the ocean floor, and frantically swam towards her permanent hiding place, dropping the shells behind her.

Foster was so mesmerised by this tiny octopus and the way she was constantly transforming herself to stay alive, that he decided to visit her every day.

The documentary chronicles his year-long relationship with the octopus.

LISTEN: The year of loneliness on Mamamia Out Loud. Post continues below.

Through the footage Foster captured himself and his retelling of his story, we learn how he slowly won over the trust of the octopus, how he followed her through her life cycle and fell more and more in love with her.

While visiting his octopus friend every day, Foster himself healed. He gained a renewed lease on life.

"I fell in love with her," Foster says in the documentary. "But also with that amazing wildness that she represented and how that changed me."

My Octopus Teacher is more than a documentary about a man and an octopus.

It's a story about grief and hope, and how even in the most challenging of circumstances we can adapt and learn how to survive.

You can watch My Octopus Teacher on Netflix now. And then you can tell everyone you know about it.