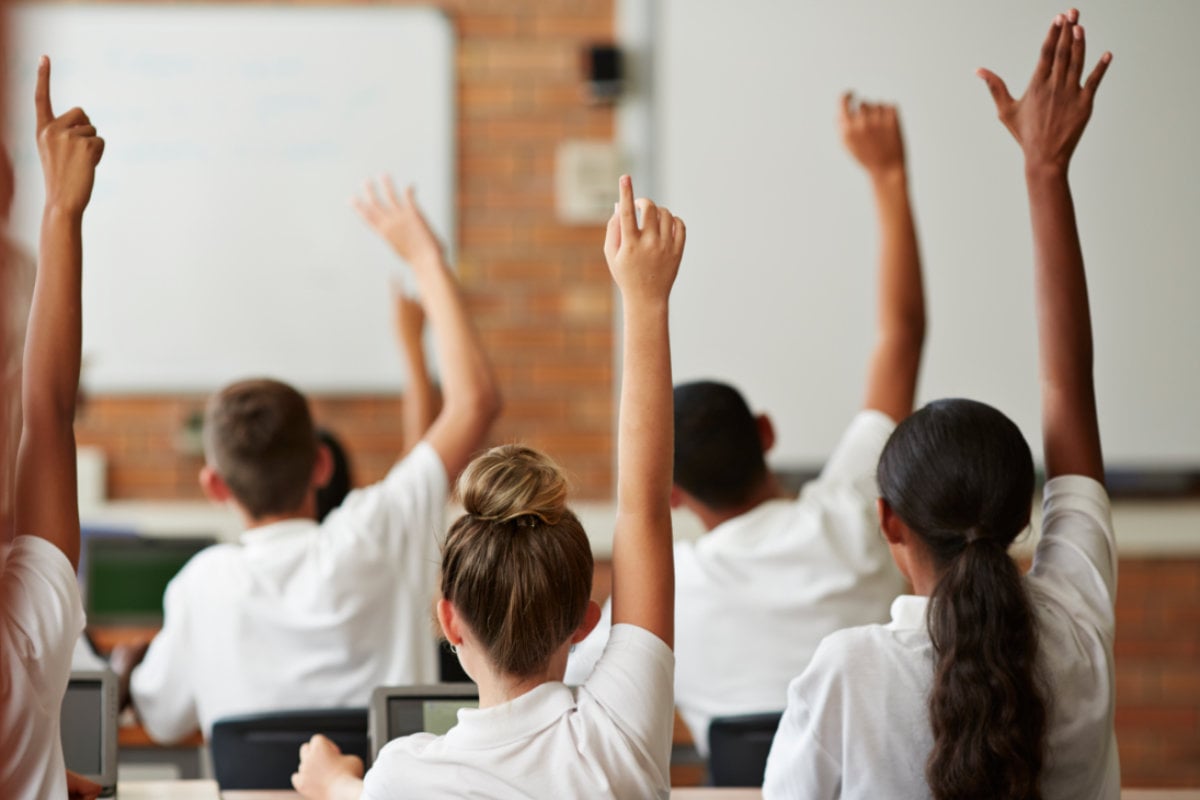 The Australian education system isn’t doing so well at the moment. Actually, it’s been broken for a while now.

Our kids’ results across maths, literacy, and science have plummeted. Despite packed curricula loaded with high-stakes testing, basic skills are flatlining.

But now educational changes are finally set to happen in NSW. It may be one out of six states, but it’s a start, right?

Last week, Premier Gladys Berejiklian announced a full reform of the state curriculum to be completed by 2024. The new curriculum will take us “back to basics” by culling subjects such as Coding 101, Puppetry, and Drone Essentials (yes, they’re a thing) and making sure kids can read and write proficiently instead. Year 12 exams are on the chopping block, and we’re even talking about scrapping conventional year levels so kids can learn at their own pace.

Back to basics always sounds good to the electorate. But as a teacher, I’m not holding my breath. We don’t need a "back to basics" approach in a world that is moving faster than any time in its past. We need strong foundations and students who have the capacity to learn and be agile with that learning.

After more than 15 years in schools, I’ve seen enough curriculum revolutions to be sceptical. There was a similar curriculum change that I drove students through in Scotland, which translated to less than excellent results across the country. In Australia we’ve had to sandwich social skills and robotics classes between core subjects already struggling for time. The end result is always the same: students lose out on learning in an educational experiment that’s quickly dropped come the next election cycle.

We can’t do this to our kids again. They deserve better.

If we’re going to fix our education system, we’ve got to understand that education is about more than just curriculum.

And that takes place a world away from educational fads, and political pencil-pushing.

So instead of buzzword-laden press conferences and chunky documents no teacher has the time to read, parents, teachers, and students need the real questions answered. The ones that have to do with the difficult and messy business of learning instead of curriculum.

Here’s a few to start the conversation.

What does “learning at their own pace” mean for the sixteen-year-old boy who still reads at a Year 2 level? Does he keep grappling with phonics in a primary classroom and look on helplessly while his mates fill out uni applications?

How do we prepare kids for “the jobs of the future” in the many Australian communities where even “jobs of the present” are impossible to find?

How will a “back to basics” approach serve kids who are graduating into a world that is more complex than ever before?

And if we’re “getting back to basics”, who decides which courses make the cut? Underwater Basket Weaving might not have its place in the HSC, but will we be forced to throw out endangered subjects like Literature and Ancient History too?

They’re tough questions, but the ones we have to ask if we want this curriculum change to survive the transition from boardroom to classroom. Find the answers and we’ll be that much closer to giving our kids the education they deserve.

Do I believe it can be done? I may be sceptical but, like any veteran chalkie, I never give up hope either. Kids have taught me that great transformations come when you least expect them.

What do you think about the proposed changes to the NSW education system? Let us know in the comments below.

Allan Dougan is the Global Head of Education at 3PLearning.com – the name behind online learning programs such as Mathletics, Readiwriter and Reading Eggs.

Reply
Upvote
2 upvotes
What the problem is is time. We're trying to squeeze a 21st century education in to a school system that still looks like the 1950's.
Schools overseas finish at later times than 3.30pm. Kids can handle this. Do today's kids, who get much less social interaction and physical activity than 50 years ago, really need 12 week's holiday per year? They'd be better off at school for an hour or two longer each day and a few weeks extra per year. This would certainly align more realistically with the working world and the modern family, if we're preparing them for their future.
With all of the new subjects like technology and creativity that our kids now need to learn, alongside the basics, how can we fit that in without re-designing how the school day and term looks?
I'm not saying that teachers necessarily need to work longer days. Let's just pay them for what they work and if needed, utilise the many thousands of unemployed teaching graduates to facilitate some of this extra load.  Governments need to cough up more money for school funding - about time! Parents should stop fund-raising to force them to do this. Women need to stop giving schools their free labor to force this.
Unfortunately teacher's conditions need to be re-evaluated . They are problematic and limiting, especially for working mothers in the rest of the workforce. (eg. having to take almost a week's precious annual leave to cover curriculum days when teachers could give up some of their very ample annual leave days for this. Early school finishes at the end of term - why??) The education system hasn't been revised adequately since women entered the workforce and it simply has to be, as an absolute starting point for education reform.
C
cat 2 years ago

Reply
Upvote
@anonymous the future of the adult workforce is a move to less work hours, not more. Multiple studies show that 30hrs a week is optimal for productivity. There’s not a lot of point in raising the hours children do when we know the extra time won’t result in better results. We should absolutely align school and family life better, but it needs to be in the other direction.
Ia there any evidence that kids get less social interaction and physical exercise than 50 years ago? I’m not sure how anyone would come to that conclusion.
D
dp 2 years ago

Reply
Upvote
@anonymous you’ve raised some really good points. The curriculum is really just one part of a much wider puzzle.
Z
zo 2 years ago

Reply
Upvote
1 upvotes
@anonymous as a student graduating in a little over ten weeks, I can say, that in my opinion, additional hours isn't what is needed. The younger children struggle to concentrate for more than 45minutes at a time, which is already being stretched in some schools with hour long lessons.
I think that rather than spending more time in board rooms, they should be spending more time asking my peers, my teachers and I what we think would be beneficial. And I'm not talking more holidays and juvenile things like that, I'm talking honest problems, such as unbalanced loads in courses that are alloted the same hours to complete, I'm talking outdated testing techniques that don't always allow students to perform to the best of their ability. There is so much time wasted in the average school day that could be better used to fixate on the most important parts of schooling. Those are the changes they should be aiming to make.
In the end, do you think the government fully knows what students need, without actually taking the time to ask the students and teachers themselves?
A
anonymous 2 years ago

Reply
Upvote
@zo Our education system has to work for us as a society, not just to teachers' design. Of course educators should be consulted but definitely not solely, as the world of education needs to prepare children for their future in the world that the rest of us inhabit and are expert in, not just the world of school that teachers inhabit.
I also wasn't suggesting classes are made longer than 45 minutes. Even adults' concentration span doesn't do well past that point. The extended school day could be broken up by play-based learning and physical activities, other than solid classroom based learning (which has always been a disadvantage to boys in my opinion). There is enormous scope for how the school day could look if we started from scratch and took into account how all kids learn, not just the one-size-fits-all approach. Of course, teachers' education would need to be adapted also..
News
General
Opinion
True Crime
Politics
Sport
Explainer
Entertainment
Celebrity
Reality TV
Movies
TV
Books
Rogue
Royal
Lifestyle
Beauty
Fashion
Weddings
Home
Wellness
Health
Fitness
Travel
Food
Parents
Before The Bump
Pregnancy
Baby
Kids
Teens
School
Parent Opinion
Work & Money
Money
Finance
Career
Lady Startup
Relationships
Sex
Dating
Separation
Friendship
Family
Real Life
Couples