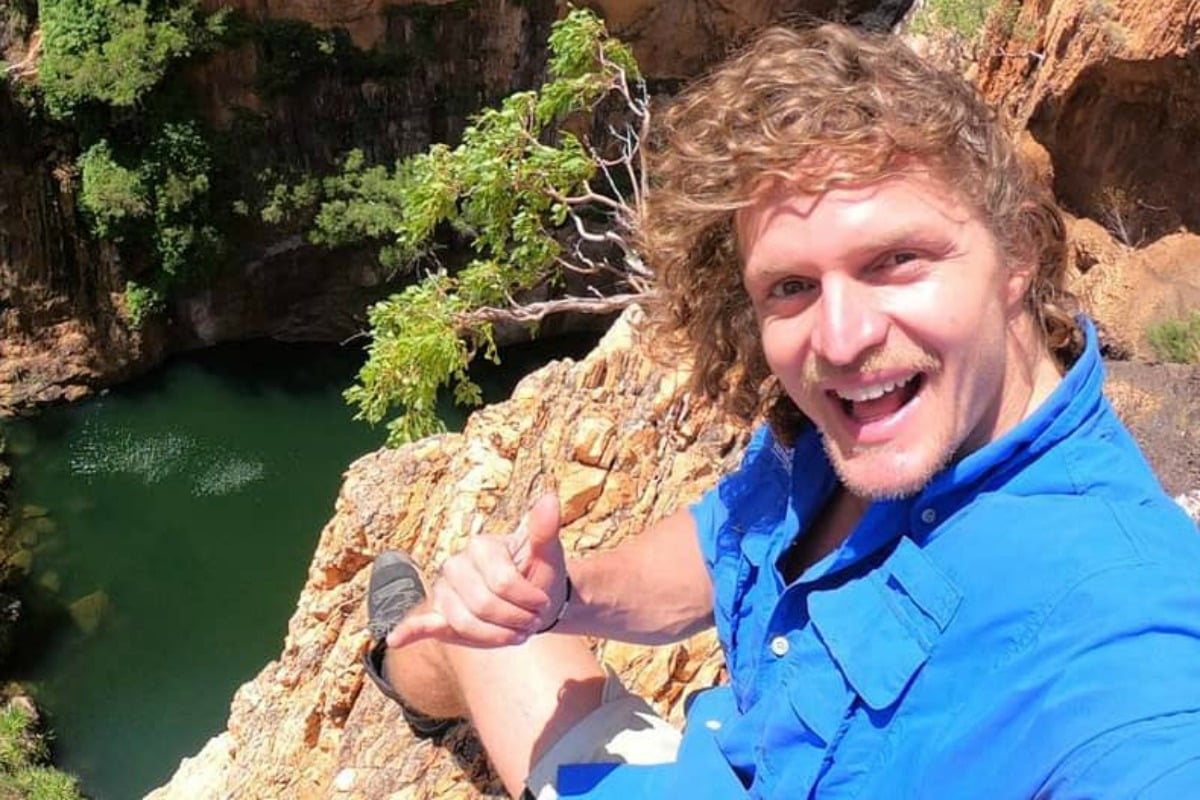 1. It looks like Nick 'The Honey Badger' Cummins has a new girlfriend.

Two years after confusing precisely... everyone on The Bachelor, Nick Cummins has reportedly found himself a new girlfriend.

In case you need a refresher, back in 2018, Cummins aka 'The Honey Badger' flew his final two contestants, Brittany Hockley and Sophie Tieman, over to New Caledonia before choosing neither of them and fleeing to another country. Yep, it was… a lot.

According to The Daily Telegraph, Cummins is spending lockdown with George in Seal Rocks on the mid-north coast of New South Wales.

The pair have recently shared photos of themselves spearfishing on Instagram.

Cummins (bottom left) can also be seen in one of George's Instagram photos alongside the rest of their friends.

That said, neither Cummins or George have actually confirmed they are dating.

Listen to the Spill, Mamamia's daily entertainment podcast. On today's episode, co-hosts Kee Reece and Laura Brodnik chat about Keanu Reeves auctioning off a date for charity.  Post continues below.

2. "I thought we were going to get married." Too Hot For Handle's Harry and Francesca have split.

During isolation, many of us become very invested in Netflix's latest dating show, Too Hot To Handle.

The show, which was originally designed for contestants to keep their hands off one another, ended up with many contestants getting together — and some even dating after the show ended.

But sadly, the one couple that lasted, Harry Jowsey and Francesca Farago, have split.

who watched the reunion!? 👀

Francesca, the first to announce the news, uploaded a five-minute video to her YouTube channel titled, "Our Breakup."

During the video, she explained that Harry sadly ended their relationship as he could no longer handle the long distance between them. (He's based out of Los Angeles, while Francesca lives in Vancouver, Canada.)

"Harry and I are not together anymore. I obviously was heartbroken," she began.

happy birthday noodle❤️ I hope this year gives you everything you’ve ever wanted & more. love you forever.

She continued to explain that despite Harry not discussing the breakup just yet, she can't keep the news a secret from her 4.7 million Instagram followers.

"There are a lot of things I personally believe, for my mental health, that I cannot tolerate anymore. I cannot fake a relationship. I cannot pretend that everything is going to be okay," she said.

"I'm deciding to come forward with this video to announce that we're not together, and we're not getting back together because I needed to solidify that in my own brain."

She finally added that despite her feelings being "very, very real" for Harry, it seems that they weren't reciprocated.

3. "We're over the moon." Married At First Sight's Carly Bowyer is expecting her first child.

WE’RE HAVING A BABY! In what’s been a crazy 2020, we see a little baby light at the end of the tunnel. We’re over the moon, and can’t wait to meet our little Biscuit 🍪 @neilfgoldsmith More baby goss on my podcast @findingaunicorn tomorrow! #13weeks #baby #babybiscuit #december2020

In an announcement posted to Instagram on Wednesday, the 34-year-old shared: "WE'RE HAVING A BABY!"

"In what's been a crazy 2020, we see a little baby light at the end of the tunnel. We're over the moon, and can't wait to meet our little Biscuit."

Carly appeared on the 2018 season of Married At First Sight, where her relationship with Justin Fischer didn't last.

She has since found love with partner, Neil Goldsmith, who she has spent the lockdown period with.

2019 was a heartbreaking year for Australian Survivor's Lee Carseldine.

Hi everyone. I’ve decided to give an update of the last 6 weeks. I have been oversees working on a project and my mother unexpectedly suffered a massive stroke and passed suddenly while I was away. I am returning home immediately and will be taking time away from everything to make sure my family is ok. I have lost the most amazing human in my life. A pillar of love, support, integrity, empathic and nurturing soul that has been right by side throughout every triumph and disaster in my life. It is because of her that everyday I strive to be a better human. I was astounded by the amount of daily unconditional love and support she offered anyone that crossed her path even if meant it was to the detriment of her own health. She was instrumental in putting me on a spiritual path of knowledge, acceptance, love and devotion to the big guy upstairs. Earlier this year mum was diagnosed with Motor Neurone Disease, it was quite aggressive and it was a daily fight with her pain but she never gave up because she wanted to watch her 4 grandsons grow up. She chose to not let MND take control of her body completely and continued to enjoy daily life. In the end it was a stroke not MND that took her life. Knowing Mum is at peace with her own Mum right now is the only comfort I can take at the moment of loss. The impact she had on her four grandsons in their short lives will be reverberated throughout future generations and she can watch proud the fine young men they will grow up to be. RIP Elizabeth “Beppie” May Carseldine. I don’t know how to move forward but I will continue to commit to your legacy for you. Thankyou already to everyone for your love & support, especially our incredible close knit family. My future silence is only one of trying to comprehend what has just happened.🙏🏼✝️❤️ - Lee, Jake, Sam, Rach, Beau, Eli, Stu.

However, after what was an extremely difficult period, the 44-year-old has now shared that he's found love.

While speaking to Courier Mail, Lee explained that he met paediatric and neonatal nurse Sanchia during some work he was doing for the gym, Fitstop.

"We met through Fitstop, which I do some brand ambassador work for," he began.

"It's a relief getting it out there [publicly]. Not much to say apart from the fact she is an amazing, caring woman and spending time with her is so comfortable and easy."

The last 18 months have been a bit rough but all is starting to come good. 😊🥰😊

5. From Australia's sweetheart to the 'bad boy' of Paradise: Everything we know about Ciarran Stott.

Approximately eight months ago, Australia fell in love with a British man in a leopard print necktie.

Our love was really cemented thanks to a bunch of grapes, and not a lot... else, and our hearts broken when he left our lives (and Angie Kent's, but also... ours) on a very sad episode of The Bachelorette. 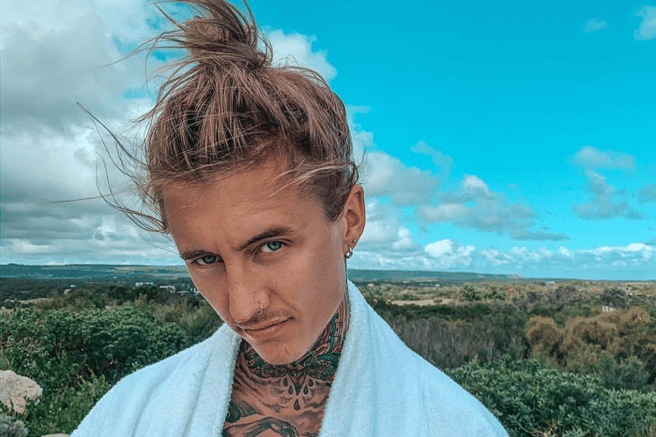 Months later, Ciarran Stott is about to reappear on our TV screens for Bachelor in Paradise, sans neck tie but once again covered by grapes, and we are just a little bit excited.

This is everything we know about him, ahead of the show's premiere.

After isolation what’s the first thing you are going to do? I’ll be flying straight to Darwin to get tatted up! Itching to get back in the chair 💉💉 @mim_dabbs_tattoos I’m coming for you 😂💯

Ciarran, 26, is originally from Bolton, in Manchester, England, and moved to Perth as a 12-year-old to live with his dad and step mum.

He later moved to Darwin, and was a rifleman in the army before The Bachelorette.

If you’re reading this, I hope something great happens to you today 🖤

Ciarran left the show despite being the favourite to win Angie Kent's heart in the end after finding out about the death of his grandmother.

In November following his exit, Ciarran told Mamamia he hadn't been watching the show because reliving the events of a few months earlier was pretty tough.

For more on Ciarran Stott, read our earlier article here.