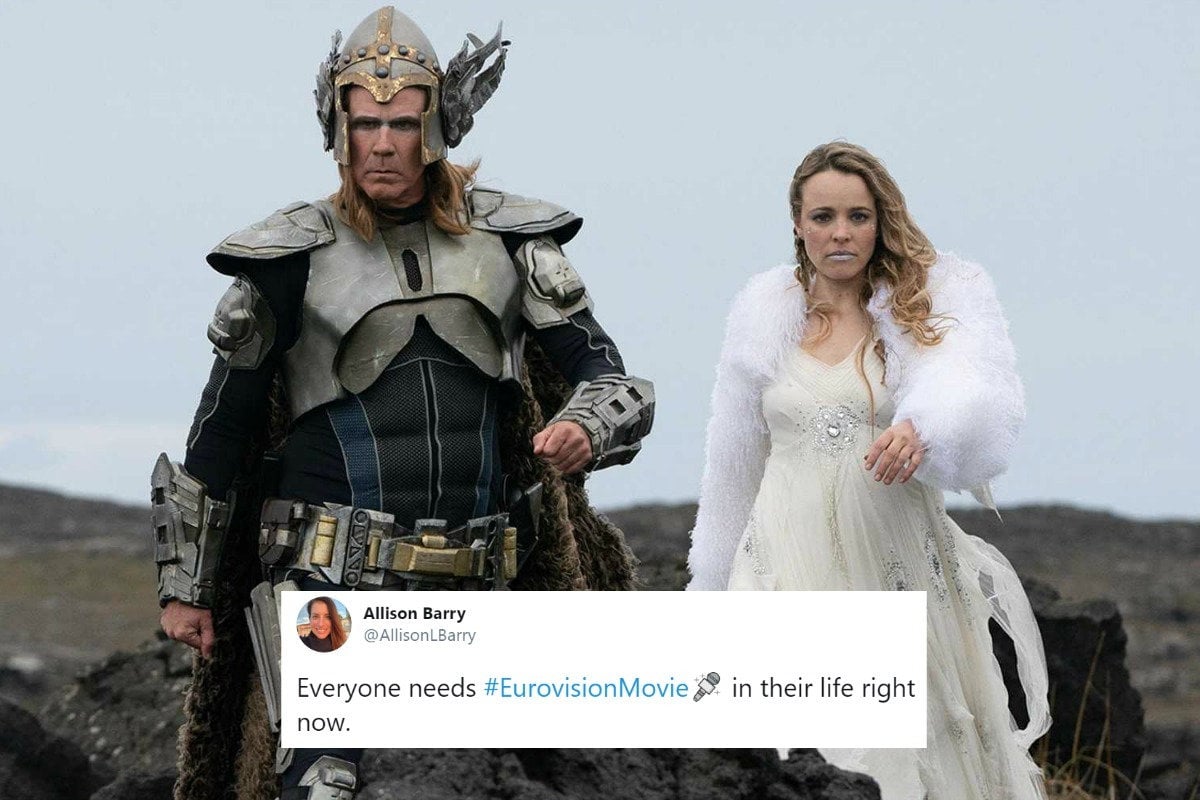 Will Ferrell’s Eurovision movie dropped on Netflix last week. And you best believe Twitter has some feelings about it.

For those of us who haven't seen it yet (and are apparently missing out), the film delves into the mystifying and glittery world that is Eurovision by following the story of small-town Icelandic musicians Lars (played by Will Ferrell) and Sigrit (played by Rachel McAdams) who take to the global music competition to sing their original song, 'Volcano Man'... which is just as bizarre as it sounds.

But despite the strange storyline and wonderfully outrageous costumes, viewers said the movie was surprisingly... good.

In fact, many went so far to say it was the "best movie this year". Yep, really.

Here are all the best reactions to Eurovision Song Contest: The Story of Fire Saga.

Truth is i have rewatched #EurovisionMovie more times than i expected. But it is an actually pretty fantastic movie.🙌 pic.twitter.com/KKboEzRu4q

Everyone needs #EurovisionMovie in their life right now.

Me watching first half of #EurovisionMovie on Netflix: wow this is such a stupid movie.

Me, crying when they sing together at the finals: pic.twitter.com/uZcMdElHWQ

Call me crazy but I don’t hate it #EurovisionMovie pic.twitter.com/c9PhPsMuxp

#EurovisionMovie best movie I’ve seen, am I the only one who can’t get ja ja ding dong out of my head 😂🤣😂 what an ear worm I love it!!!

Ja Ja Ding Dong is a bop. There I said it. #EurovisionMovie

Just watched #EurovisionMovie and if you liked, or even remember, Zoolander 2 then you’re in for a real treat.

Me when they mashed up "Believe" and "Waterloo" in #EurovisionMovie: pic.twitter.com/yr4qQkwJTE

If you didn’t cry at the end of #eurovisionmovie obviously you haven’t been quarantining as hard as the rest of us. 🤷🏼‍♀️😂

Came for the comedy... stayed for the banger soundtrack, my newfound love of this weird ass competition, and the celebration of diversity. #EurovisionMovie was the best! pic.twitter.com/6vJ7Rkn4sx

Uh... can we take a second to talk about #EurovisionMovie on @netflix and how I had some LOW expectations but it’s giving me feels I didn’t know I needed ?! Now if you’ll excuse me I need to go take some sandwiches and whiskey to the elves. #yayadingdong pic.twitter.com/dTRBkFX9ty

Dan Stevens is in #EurovisionMovie that’s all that needs to be said. pic.twitter.com/UrCJQ5FzS9

In other news, #EurovisionMovie is adorable and wholesome. It’s what the world needs. Leave some snacks for your local elves! #YaYaDingDong

If you need some light relief and a bit of a belly chuckle during theses crazy times watch the #EurovisionMovie 👍🏻 pic.twitter.com/oHMo7vmrcl

If you haven’t seen Eurovision on @netflix, go do it now. Right now. Genuinely a feel good comedy and “Husavik” is an instant classic. Best movie this year. #EurovisionMovie | #FireSaga pic.twitter.com/CXtcK79k58

I was worried I won't like this movie but damn was I wrong. I can add this to my list of fave Rachel McAdams movies #EurovisionMovie pic.twitter.com/dU4YEUlML4

If you haven't seen #EurovisionMovie yet, it is funny and dumb and charming. Dan Stevens is a scene-stealer and the songs are ridiculous earworms.

It will never be enough!! I only want to watch #EurovisionMovie again!! #JaJaDingDong #Netflix.

Have you watched Eurovision Song Contest: The Story of Fire Saga? Let us know what you thought in the comments below.

Eurovision Song Contest: The Story of Fire Saga is streaming now on Netflix.