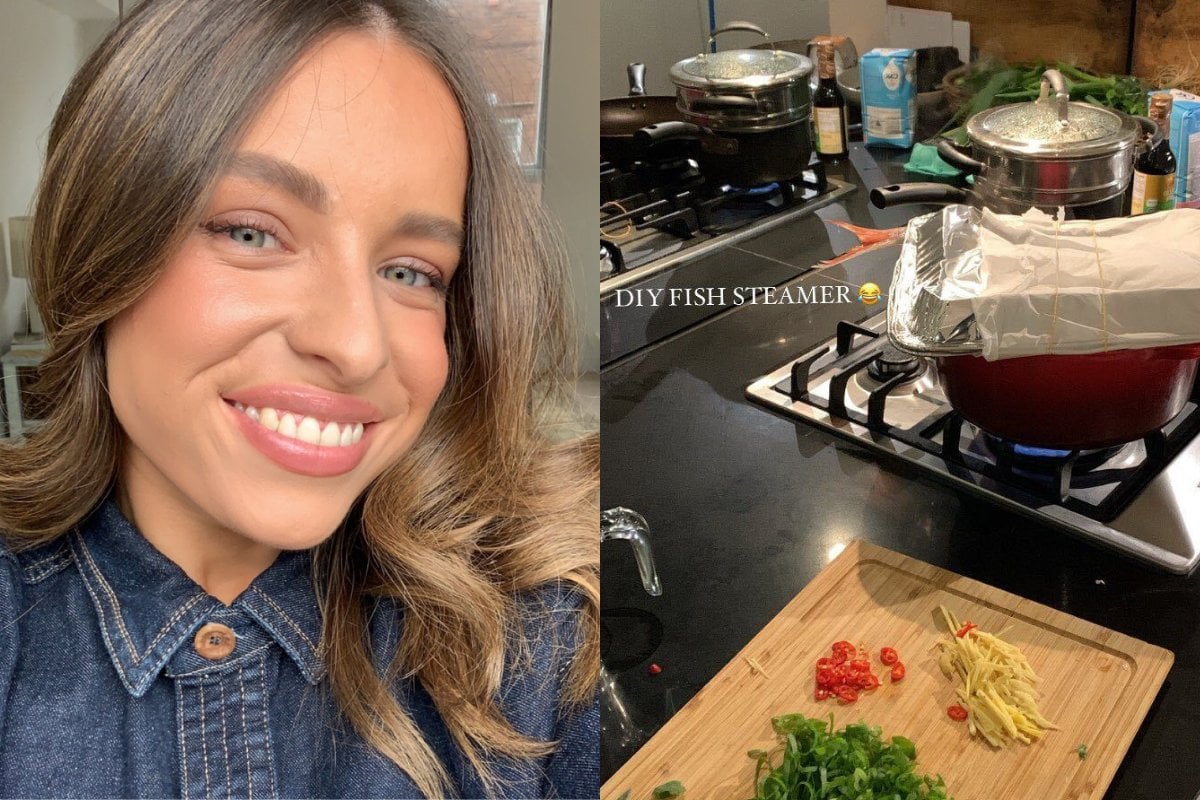 I love the judges – Melissa, Jock and Andy – the contestants, and of course, I love the food.

Despite growing up with the reality cooking show and watching the occasional episodes here and there, like many of us, I only really got into it when the pandemic began.

There were new judges, familiar faces returning, and four to five nights of guaranteed wholesome entertainment – it was the perfect distraction from the world crumbling outside.

Watch me attend the MasterChef media event and cook with... Jock Zonfrillo! Post continues below.

I'm also a big foodie but couldn't cook to save my life (my speciality used to be eggs on toast) – so all that time watching the pros whip up dishes under pressure taught me a thing or two.

This season, I challenged myself to make three dishes the contestants created on the show, because naïve old me thought it wouldn't be that hard.

Here's exactly how it all went. 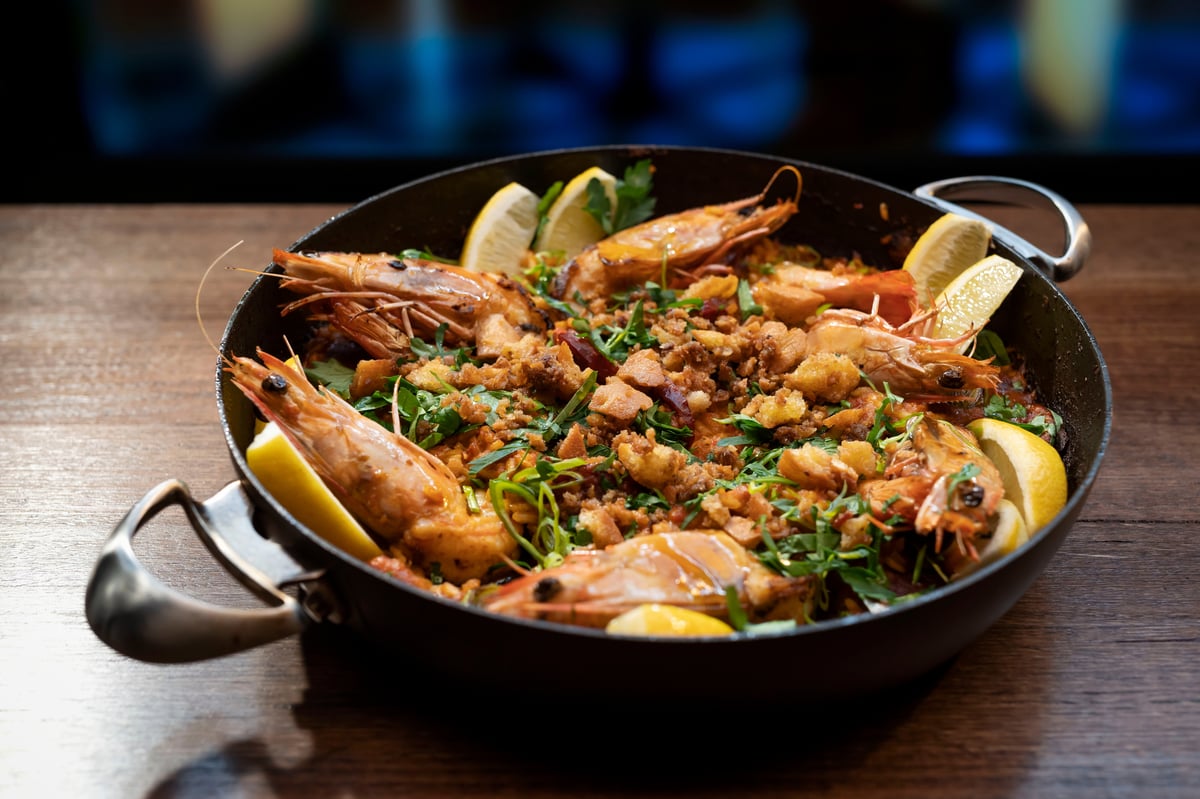 The first dish I had to try to recreate was Julie Goodwin's Prawn and Chorizo Paella.

I love chorizo, I love prawns, and I love rice – so cooking a one-pot dish with all three in it was a no-brainer.

There was only one slight problem: I've never eaten or cooked paella.

But that didn't deter me! I bought all the ingredients and got to work. And honestly, it was pretty damn simple. 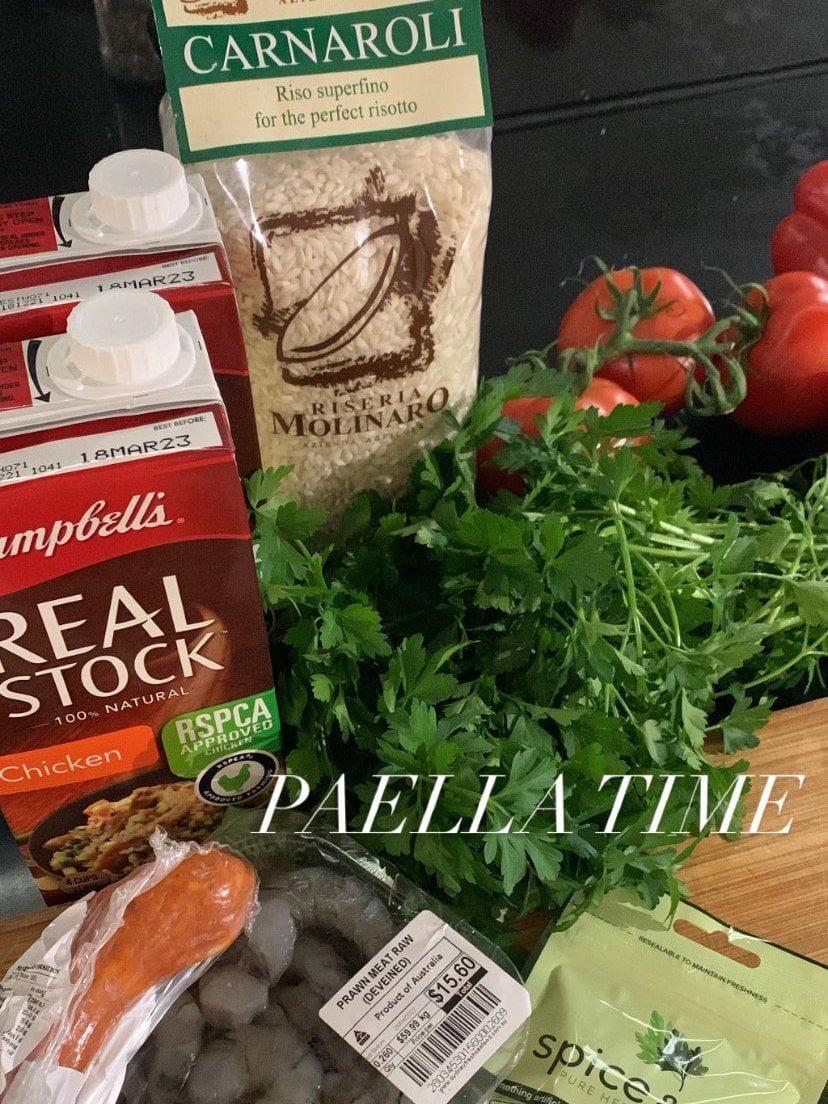 We are ON. Image: Supplied.

Similar to making a slow-cooked dish like ragu, all I had to do was cook the protein, dice up the veggies and let the ingredients simmer in the stock and rice for 45 minutes. I didn't make the anchovy crumb, but it was just as good without.

The recipe was so easy to follow. I've made it twice now and my boyfriend constantly requests we make it for dinner (clearly a winner!).

And yes, it was DELICIOUS. Thanks, Julie! 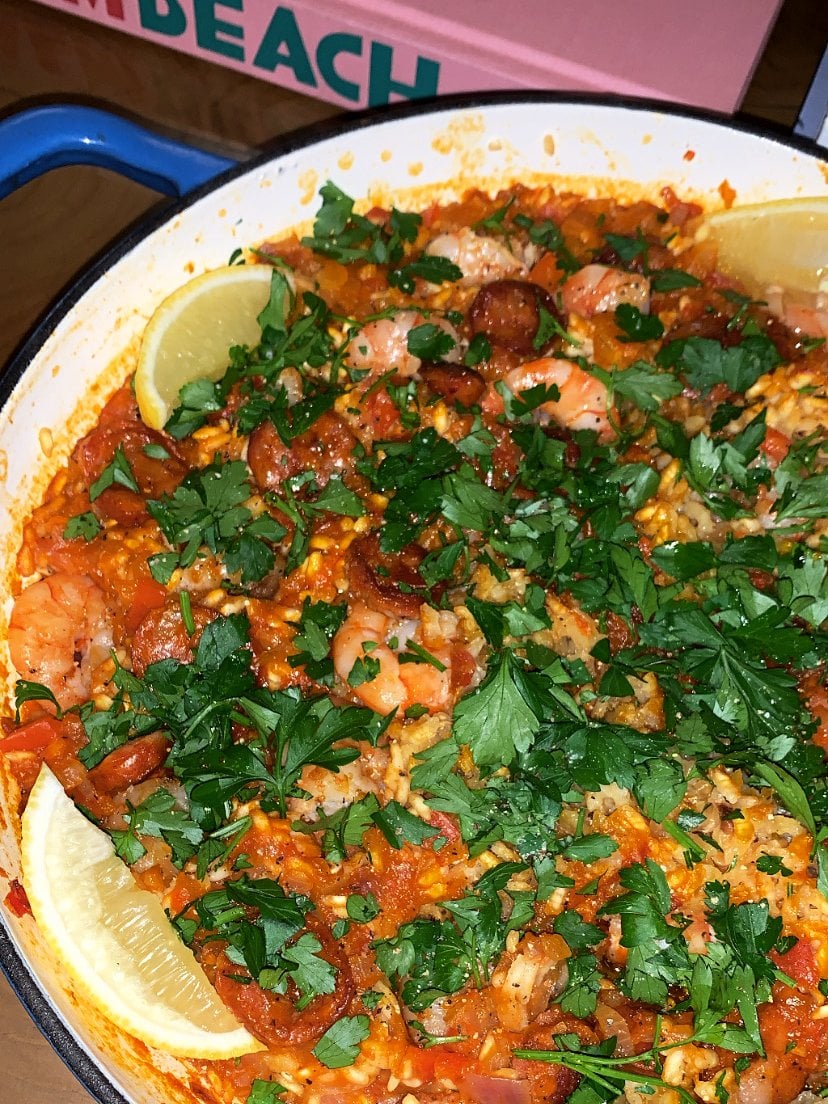 Here's the recipe if you want to try it too.

1. Heat a paella pan, large shallow chef’s pan or frypan over medium-high heat. Cook the chorizo slices for a minute each side or until golden brown. Transfer to a bowl, reserving oil in the pan.

2. Add a tablespoon of olive oil to the pan. Sauté the prawns briefly until golden and just cooked through. Remove from the pan.

3. Add a tablespoon of olive oil to the pan and add half of the leeks slices. Cook until they are browned on one side. Carefully remove from the pan and set aside.

4. Meanwhile, bring the chicken stock and saffron to the boil. Once boiling, reduce the heat to low and allow to simmer.

5. Prepare the sofrito: place the tomatoes, onion, capsicum, the other half of the leek and garlic into a food processor and puree until smooth. Add 2 tablespoons olive oil to the pan and then the sofrito. Stir over low-medium heat until most of the moisture has evaporated, about 7-8 minutes. Add the paprika and stir for a further minute. Add the rice and stir thoroughly.

6. Pour in one third of the hot stock and stir well. Add the chorizo and distribute evenly in the pan. Add the remaining stock. Cook, without stirring, for around 40-45 minutes on low heat or 25 minutes on a higher heat. When the rice is cooked through, remove the pan from the heat.

7. For the anchovy breadcrumbs, heat oil in a deep fryer to 180 degrees Celsius.

8. Add the cubes of bread and fry until golden brown. Remove from the oil and place into a bowl lined with paper towel. Sprinkle with salt and set aside to cool. Break down into smaller pieces by hand or in a food processor.

10. To serve, arrange the prawns around the frypan, nestling them into the rice. Place the leeks around the pan. Sprinkle parsley over the top, and some finely shredded tops from the leeks, if desired. Pile the anchovy breadcrumbs into the centre of the pan. Drizzle generously with olive oil, and garnish with parsley and lemon wedges. 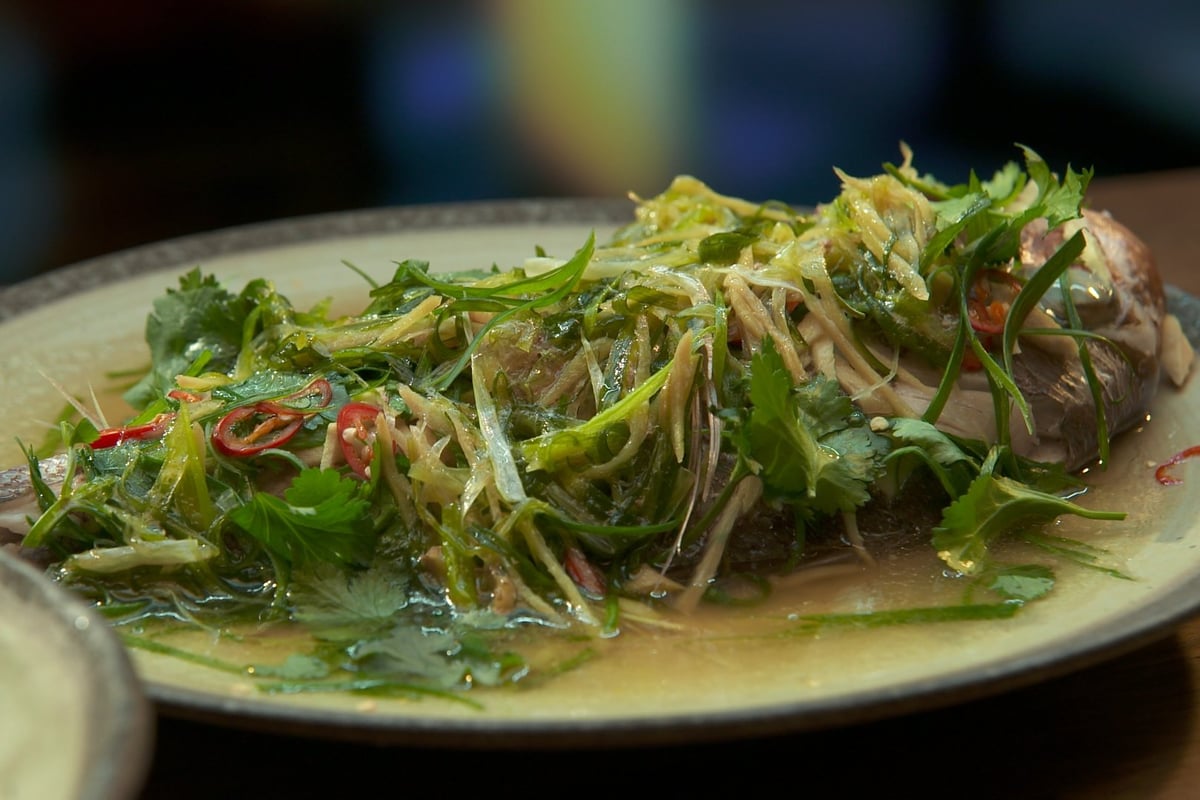 The next dish I attempted was Chris Tran's steamed snapper with ginger shallot oil. I mostly cook Asian dishes when I'm in the kitchen, so this one sounded pretty simple.

See, the recipe requires you to use a steamer, and I do not own one of those. So, I made do and created my own with a pot, aluminum trays, baking paper and elastic bands. 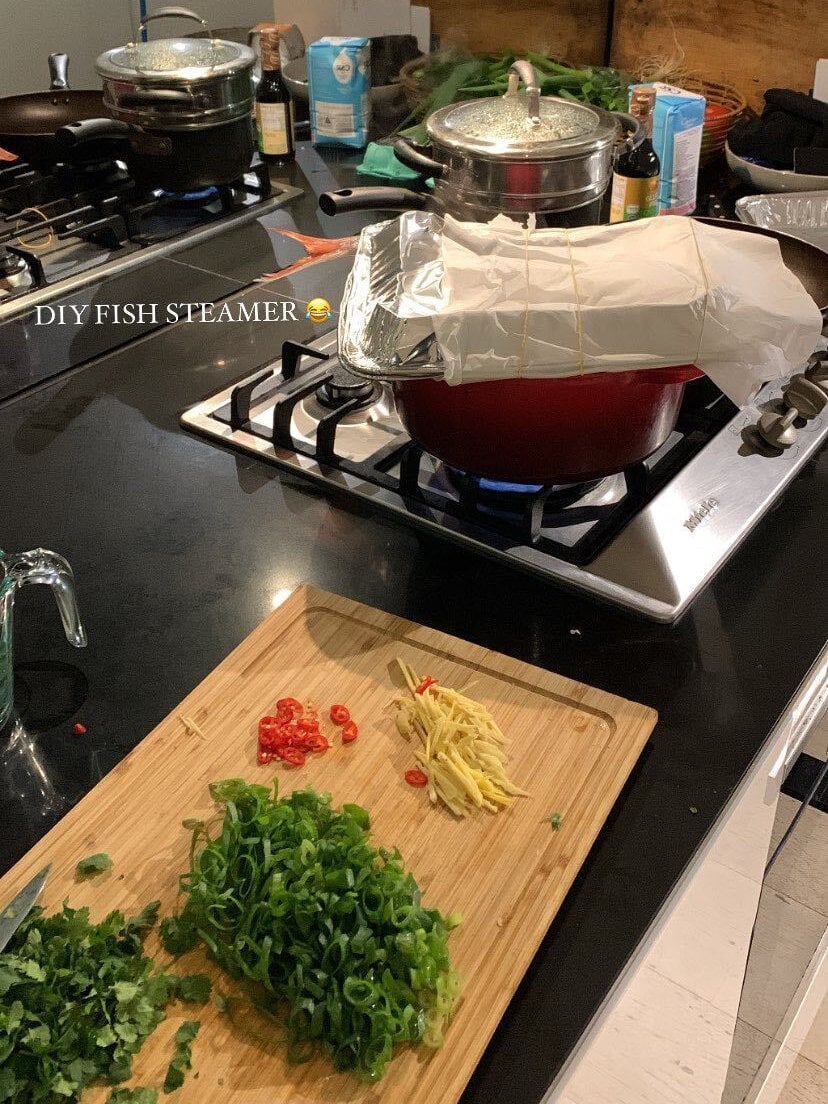 Do not try this at home. Image: Supplied.

Don't do this – just buy the bamboo steamer. They don't cost much and they'll save you a whole lotta time transferring the whole fish into a fry pan.

Oh, and you won't have elastic bands flinging at you when they get too hot and break.

But despite the chaos in the kitchen, this dish ended up being delicious.

It was light yet filling and if I owned a steamer, I would 100 per cent make it again. 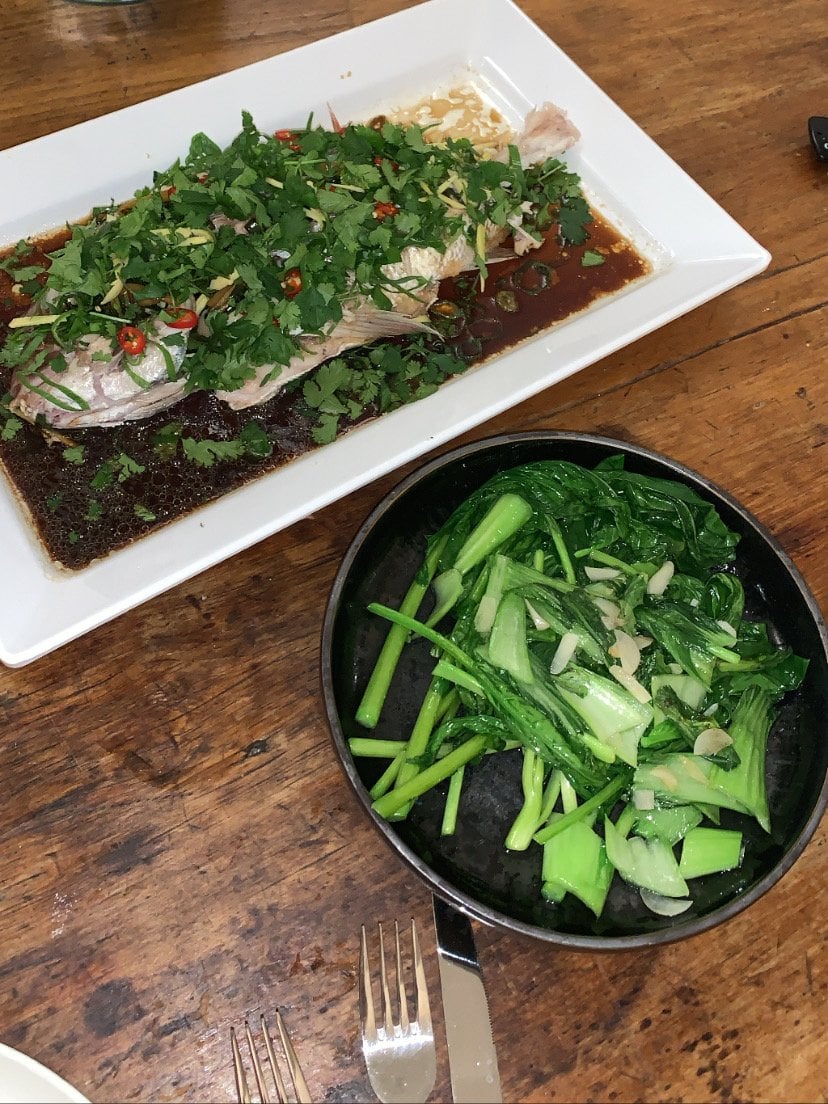 Here's the recipe if you want to try it too.

1. For the jasmine rice, place rice and water into a saucepan and cook according to package directions.

2. Uncover and fluff the rice using a plastic or wooden paddle/spoon. Keep covered until ready to serve.

3. For the steamed snapper, bring a wok of water to the boil.

4. Combine white soy sauce, water and sugar into a bowl and mix until sugar has dissolved. Set aside.

5. Score the snapper, place on a plate then into a large bamboo steamer. Cover and steam for 9-12 minutes.

6. Remove the fish from the steamer and carefully place onto a serving plate.

8. When the onion starts to sizzle vigorously, pour in the white soy sauce mixture and bring to a simmer.

9. Remove from the heat and pour hot dressing over the steamed snapper.

11. For the Chinese Broccoli, place oil into a large frypan over medium-high heat.

12. Add garlic and sauté for 15 seconds, until garlic starts to lightly brown.

13. Add Chinese broccoli and coat evenly in the oil and garlic, until the leaves and stems turn a vibrant green. Season with salt and transfer to a serving bowl. Serve alongside the snapper and rice. 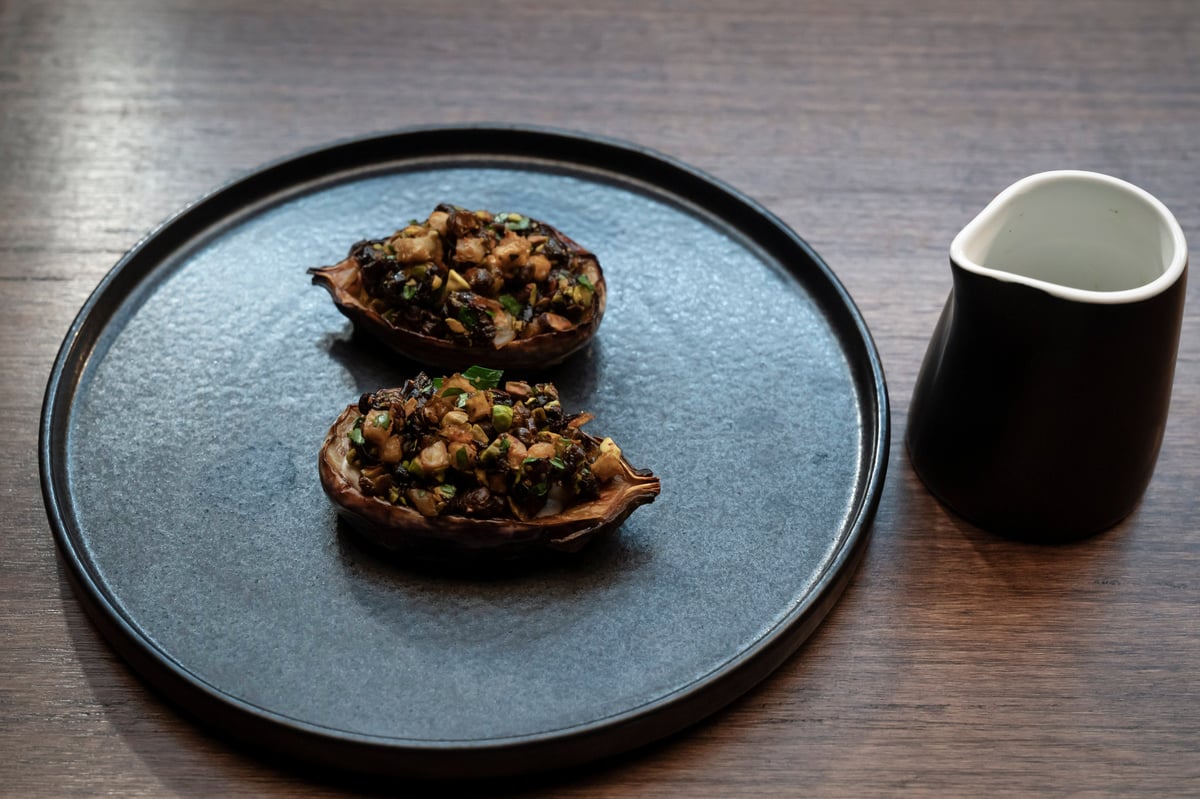 The final recipe I wanted to try was Aldo's Melanzane a Scarpone – meaning boot-shaped aubergines.

According to the recipe on Channel 10, the "dish from Naples is simple yet scrumptious".

This recipe reminded me very quickly that I'm not, in fact, a chef. Not even close.

It was HARD. There are a lot of elements involved, and no one mentioned it would take close to two hours to make. 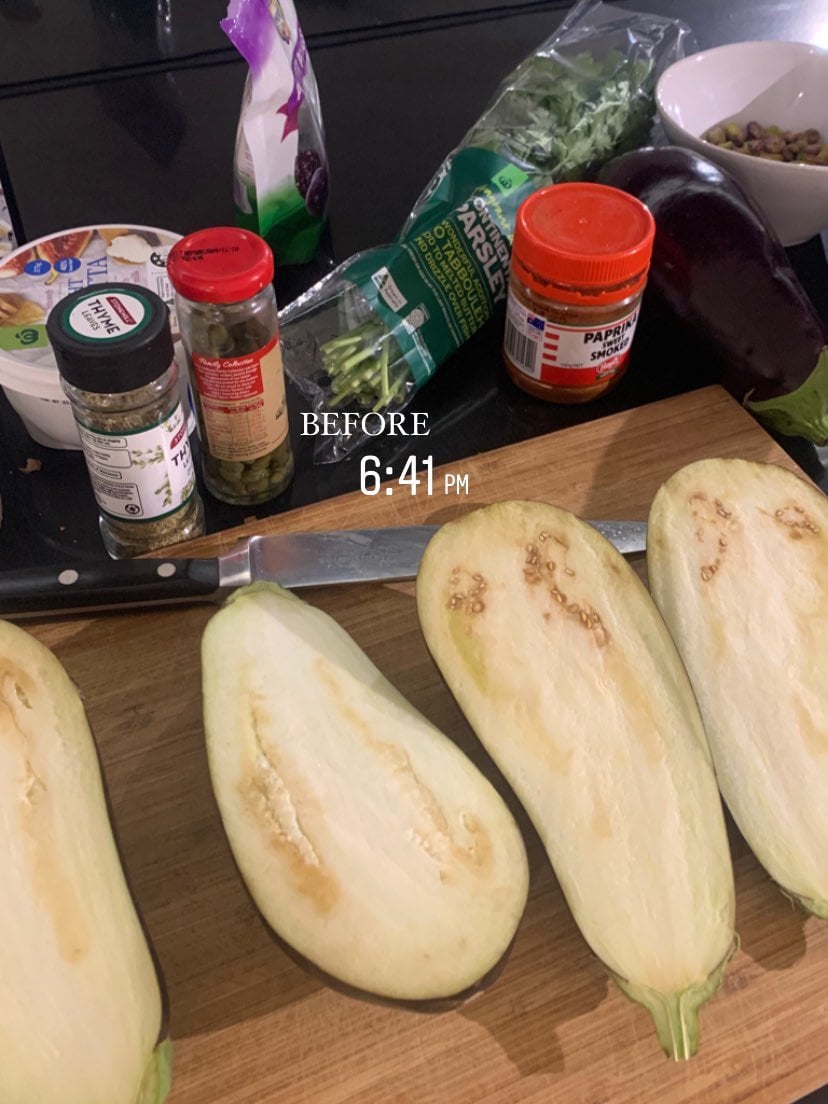 Before this recipe almost defeated me. Image: Supplied.

But again, I soldiered on and tried techniques I've never attempted before – deep frying, making salsa verde and being very patient.

Note: I used store-bought ricotta because today was not the day I learnt how to make cheese, too.

By the time I finished at almost 8.30pm, it was honestly all worth it. The flavours (taken from Maggie Beer's mystery box) worked so well together and went down a treat.

It was also the most requested recipe when I posted it to my Instagram, so clearly the effort paid off! 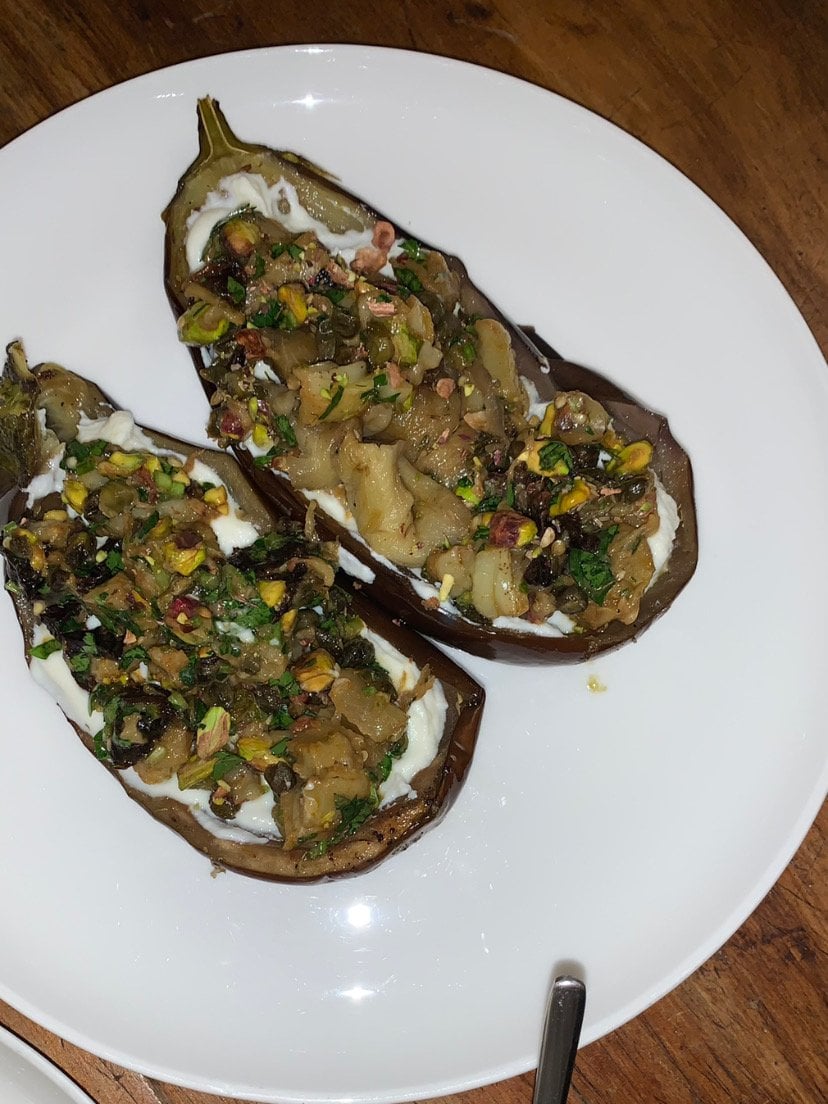 After! That was tough. Image: Supplied.

I now have another vegetarian dish to add to my repertoire. Thanks, Aldo!

Here's the recipe if you want to attempt it too.

1. Preheat oven to 180 degrees Celsius fan forced. Bring a large saucepan of salted water to the boil, then remove from the heat.

2. For the Ricotta, place the milk into a small saucepan over medium heat. When just below boiling point, add vinegar and stir gently for 20 seconds. Remove from the heat, cover with a lid and set aside for 15 minutes. Pour through a lined sieve and discard the whey. Place the sieve over a deep bowl and place in the fridge to further strain and cool for at least 30 minutes.

3. Gently squeeze the ricotta to remove liquid then place into a small food processor. Process until smooth. Add 1 tablespoon of the cream at a time and process until well combined. Season with salt then transfer to a piping bag. Set aside in the fridge.

5. Heat oil in a deep saucepan or deep fryer to 170 degrees Celsius.

6. Add the eggplant and flesh and cook for four minutes. Remove from the oil and place onto paper towel until cool. Reserve oil for later use.

7. Combine the vincotto and verjuice in a small bowl. Brush the eggplant with the mixture and sprinkle with thyme leaves and season well with salt. Bake for 20 minutes, turning every five minutes, until eggplant is tender and browned. Remove from the oven and set aside to cool while preparing the filling.

8. For the Eggplant Filling, heat reserved oil to 180 degrees Celsius.

9. Add the capers and fry until crispy, about one minute. Remove from the oil and drain on a paper towel.

10. Trim the stem and base from the eggplant. Cut away the skin and dice the flesh into 4mm cubes. Add to the oil and fry until golden and soft, no more than two minutes. Transfer to paper towel to drain then place into a bowl. Add chopped fried eggplant centres, parsley, fried capers, paprika and salt. Dice prunes to the same size as the fried eggplant and roughly chop the pistachios. Combine with the eggplant by hand. Season with salt to taste and set aside.

11. For the salsa verde, using a mortar and pestle, pound the parsley then add half of the olive oil and verjuice. Continue to mix until emulsified. Add remaining verjuice and salt then add remaining olive oil, a little at a time, until combined to the consistency of pouring cream. Transfer to a small serving bowl.

12. To serve, pipe a 1cm thick layer of ricotta into the cavity of each eggplant shell. Spoon in the filling in a generous pile. Place onto a serving plate and serve with the salsa verde on the side.

Which MasterChef recipe will you try make first? Let me know in the comments!

J
jules75 a month ago

Reply
Upvote
I'm bemused by the comment that you're a foodie but you can't cook. Do others share this view - ie you can call yourself a foodie if you know very little about food?
K
kyliemedcalf133 a month ago

Reply
Upvote
@jules75 foodies don’t have to be able to cook but just be interested and amazed by food! Not everyone has the skills like these amazing Masterchef contestants but we all have the passion.
J
jules75 a month ago