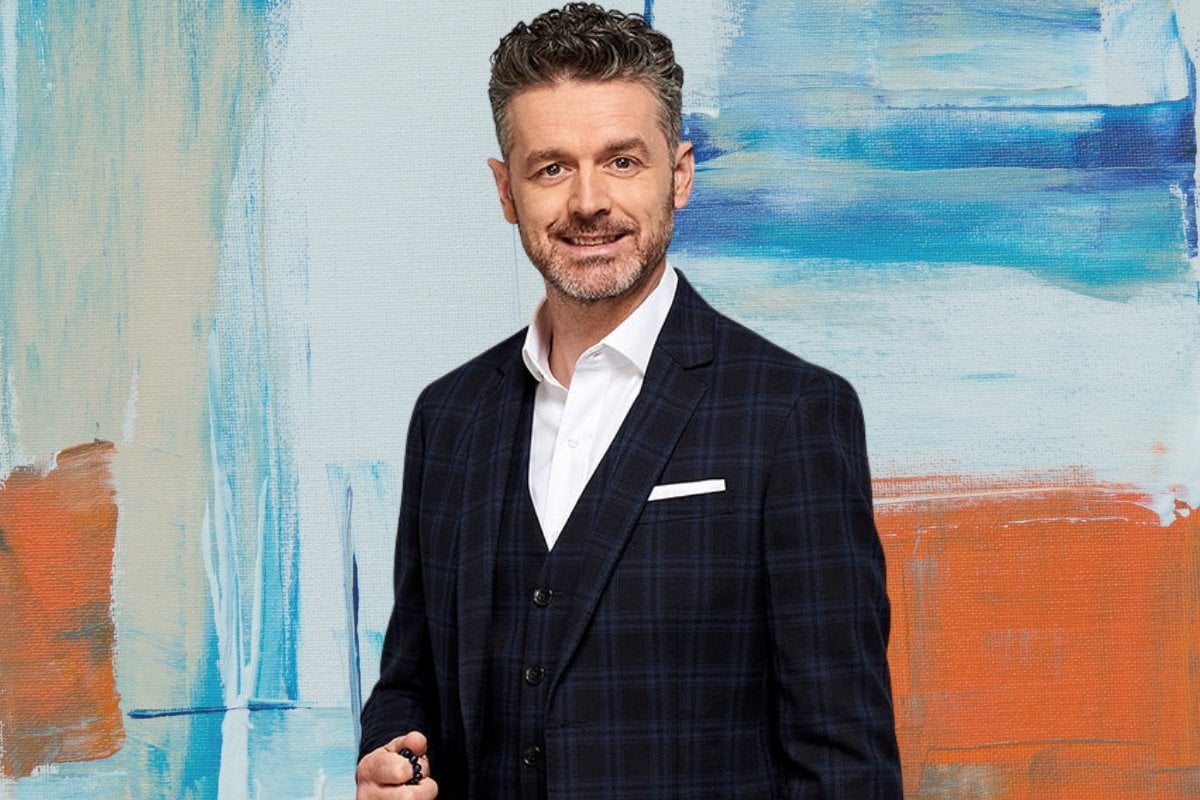 After a smash-hit season during lockdown last year, MasterChef has returned with guns blazing in 2021.

The heartwarming cooking show welcomed back our favourite new judges, Melissa Leong, Andy Allen and Jock Zonfrillo, in April. But unlike last year, where memorable contestants from previous seasons cooked for the title, this season introduced 24 fresh faces.

Watch: Things we say while watching MasterChef. Post continues below.

Because of that, this year feels a little different.

"It definitely feels different," Jock Zonfrillo told Mamamia. "I mean, from a contestant perspective... last season, all the Back to Win guys had been in the kitchen before. So they can semi predict what's going to happen.

"They would look at the setup of the kitchen and they would know exactly what was about to happen. If there were lots of silicone mats and pastry equipment on the racks, they would know it would be a sweet challenge," he said.

"Whereas this season, the contestants walk in and they're just oblivious to any of that stuff," he explained.

Not only is this season different for the contestants, but a year on from Jock's first season of judging, life has changed for him too.

In October 2020, Jock went from a dad-of-three to a dad-of-four. He and his wife, Lauren, welcomed their daughter Isla.

Jock is dad to daughters, Ava, 20, and Sophia, 15, from his previous marriage, and a son Alfie, three, and daughter, Isla, now six months old, with his wife, Lauren.

With two children under five at home, Jock starts his day early in order to take some time for himself.

"I get up at 5.30am-ish normally," Jock said when discussing his morning ahead of filming. "I'll get up, have a shower, come downstairs and have a couple of coffees. Then I get my stuff together."

"Because I've got this - I hate the word suffer - but I've got anxiety. And I need to need to have all my ducks in a row, every day, for all parts of the day," he said.

"So for me, I need to be super organised before my day starts. So hence getting up early. The house is quiet, I've got a moment for myself to think and categorise anything that happened yesterday. Then I'll think about the day ahead, have a look at the calendar and see what I've got coming up in the next week," he said.

"There's so much in my calendar every day, it's just a bit overwhelming. So it helps me to look at the same thing every day."

On a typical filming day, Jock will head to the MasterChef set at the Melbourne Showgrounds, between 6.30 and 7am, an hour before he's usually needed.

"I'll be at work an hour early and I'll make coffees for everyone," he said. "Every day I make 30 coffees, I reckon, for everyone: all the crew or any crew that want one."

"I enjoy it. I guess it's hospitality," he added.

The rest of Jock's (and the other judges') day on set is pretty routine. He and Andy will sit in the makeup chair for roughly five minutes (unlike Melissa, who spends much longer in the chair), followed by wardrobe, where their outfits have been pre-selected.

A usual shooting day goes for around eight to 12 hours; and like any great TV show, there are plenty of things that happen behind the scenes we don't get to see.

For example, in those moments between contestants cooking and the judges tasting the food, a few things happen.

"We'll finish the cook and stuff that's frozen will go into the freezer. Something that's chilled, like cold raw fish will go into the fridge. And if it's a hot dish, it will just stay as it is at the end of the cook, and the sauces will get reheated before it comes to a tasting," Jock said.

"Part of the dish is inevitably cold when we go to the tasting," he continued. "However, we've tasted the dish, the entire process, throughout the cook, so we'll eat that dish maybe 10 times before we actually taste it at the tasting table.

"The moment the cook finishes, we'll go over to the benches, all three of us, and we'll taste everything as it was intended to be," he said.

Plus, as Jock explained, none of the food goes to waste.

The leftovers go into their compost system and the food gets offered to the crew. It gets placed in the "crew pantry", where the crew can choose a charity, place money in the charity box and take home some food. Anything leftover gets sent to their nominated charity, SecondBite.

Throughout Jock's first season of MasterChef, fans noticed a small string of beads that he would hold during filming.

As Jock explained, the beads, called worry beads, help with his anxiety.

"It's a tool for me when my mind starts to slide," he said.

Jock explained that he was introduced to worry beads by his late friend, writer and restaurant critic, A. A. Gill.

"Adrian Gill was a good mate of mine and he always had worry beads. After he passed, his wife gave me a set of his worry beads," Jock said. "I kind of had them in my pocket for a year... then I was like, actually this is really helpful."

By seeing them more and more on this season of MasterChef, Jock hopes tools, like his worry beads, will appear normal.

"I hate to use the word normalise but I think it's normal... it's just a part of Jock," he said.

So soon, he'll be making them for not only himself but anyone who might need them.

"I think some way of normalising anxiety is a good thing. It's embarrassing and I don't want it to be embarrassing," he said. "It works for me. And if it works for me, hopefully, it can work for some other people as well."

If a day of filming finishes up in eight hours, Jock will head home and take his son, Alfie, out for pizza.

But generally, he tries to get home in time for his shower and bedtime routine. Then he and Lauren will sit down, do some work (Lauren manages Jock), and catch up.

"We'll go through a couple of hours of work and then we'll have a glass of wine and call it a day," he shared.

After his hectic filming schedule, Jock's days off are much quieter.

"I love being at home. Crawling around on the carpet with Alfie jumping on my back, clowning around... We'll go to the park, fly a kite.