1. “Everyone was laughing at it.” Jackie O on the Popstars ‘joke’ that wouldn’t make it to air today.

If you cast your mind back to the early 2000’s, you may remember a little singing competition called Popstars. The show came out two years before Australian Idol and was hosted by a fresh-faced Jackie O Henderson.

Earlier today, Jackie O recalled one moment from the show that would never be allowed to go to air today, during an interview with comedian Andy Lee on The Kyle and Jackie O Show.

During one of the auditions, music executive Chris Moss was filmed quite obviously checking out one of the performers as she sang.

According to Jackie O,  it was “supposed to be a funny thing” involving Chris getting “busted” looking where he definitely shouldn’t be.

She only just realised how outdated the humour was after recently re-watching the footage.

“Everyone was laughing at it. And I’m thinking, ‘Oh god, that just wouldn’t fly now’,” Jackie O said.

The footage was later revisited in a scene where the Bardot band members watched back audition footage during a dinner party with the judges.

"What are you looking at?" one of the band members asked Chris.

Yep, the early 2000's were certainly a very different time.

Listen to The Spill, Mamamia's daily entertainment podcast. In today's episode, co-hosts Kee Reece and Laura Brodnik discuss why so many celebrities forget the movies they’ve been in. Post continues below.

2. Glee’s Lea Michele is reportedly pregnant with her first child.

“They’ve always wanted to be parents,” the source told the publication.

But before we get too excited, the couple are yet to make any official announcement themselves.

Michele and Reich first got together in 2017, before announcing their engagement in April 2018. The couple married a year later, with 200 family members and friends present, including Michele's Scream Queens co-star Emma Roberts and her Glee co-stars Darren Criss and Becca Tobin, as well as the show's writer Ryan Murphy.

“We are so excited to be married and grateful to be surrounded by our friends and family,” the couple told People at the time. “And most of all, we’re so happy to spend the rest of our lives together.”

It looks like we'll just have to wait to see if the couple confirm the baby news.

3. Um... Too Hot To Handle's Harry says his mum told him to "shag everyone" on the show.

If you haven't watched Netflix's new dating reality TV show, Too Hot To Handle yet, we highly suggest you do.

The show sends 10 young attractive singles to a villa in Mexico where they get the chance to win $100,000. But in order to win the prize money, they aren't allowed to kiss or touch anyone else in the villa; and if they do, money will be deducted.

If you have watched it all (like we have) you will remember the Australian contestant, Harry Jowsey.

And although we already knew the 23-year-old Queenslander had a wild streak, we didn't know that his... mum does too.

Back when I was sitting poolside with no idea that my life was about to change ???????? What episode are you on? #TooHotToHandle ????

When speaking to NW magazine, Jowsey shared that his mum is his biggest fan and it was her that encouraged him to 'get along' with the women on the show.

Stream all eight episodes of Too Hot To Handle on Netflix now.

4. Married at First Sight's Stacey defends travelling over 6000km amid the coronavirus pandemic.

MAFS' Stacey Hampton has been a busy woman lately. She has travelled over 6000km across the country, amid the coronavirus pandemic.

However, since she has received some backlash over travelling this much as the government stipulates we should all stay home, she has clarified that this travel was essential.

"I've been travelling to Melbourne for my charity and I also do essential service work for a transport company every second week.

"I'm only travelling to and from business locations, otherwise, I'm isolating in my hotel until I return. I do the legal and accounts for the transport company [in Melbourne]," she explained to Daily Mail Australia.

Hampton lives in Adelaide with her two young sons but has been seen in Melbourne three times over the past month.

She also shared that her new charity was a non-profit postnatal depression charity, called Not Alone, Always Here Inc.

She said, "I have started my own charity. It's for postnatal depression. It's to target people who don't understand the symptoms, they don't understand what they're enduring and going through.

"I think there is a much greater need for it, now more than ever because of this pandemic."

The non-profit organisation will be based out of Melbourne.

5. A themed elopement and a shared passion: Inside the relationship of MasterChef's Melissa Leong. 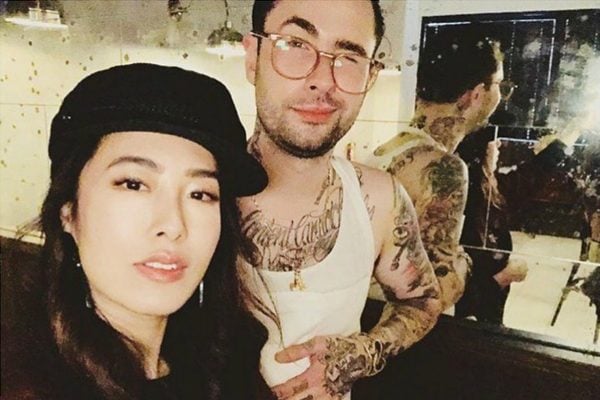 During Sunday night’s episode of MasterChef Australia, we got a glimpse into the lives of judges Melissa Leong, Andy Allen and Jock Zonfrillo.

And it was Leong’s husband Joe Jones and their fluffy child Ghost who really won viewers over.

I wish I was Melissa’s cat, I can’t stop thinking about it, what a cute family! #MasterChefAU

Can Melissa and her husband adopt me? #Masterchefau

See? We loved them.

Leong and Joe met after being introduced by a mutual friend, and eloped to the Californian desert in February 2017.

“Over dinner Joe asked me ‘So, how does eloping work exactly? Do you need to get engaged first?’ I told him I had about as much idea as he did (none), so instead, we decided to speculate on where we’d run away to, if we did decide to elope. The all knowing dice decided that our already planned trip to the US in three-ish months would be it, so we just went with it,” Leong told Vogue.

They married in the Joshua Tree National Park in a 60s, rock’n’roll-style ceremony.

“Joe and I share a common aesthetic for all things vintage and a bit rock’n’roll. And I think eloping is a pretty rock’n’roll way to say ‘I do’! The theme of our wedding day, if I had to label it, would probably be ’60s rock’n’roll. Think Bourbon and records at dawn, a shift dress, beehive hair, slim cut suiting… and cake for breakfast.”