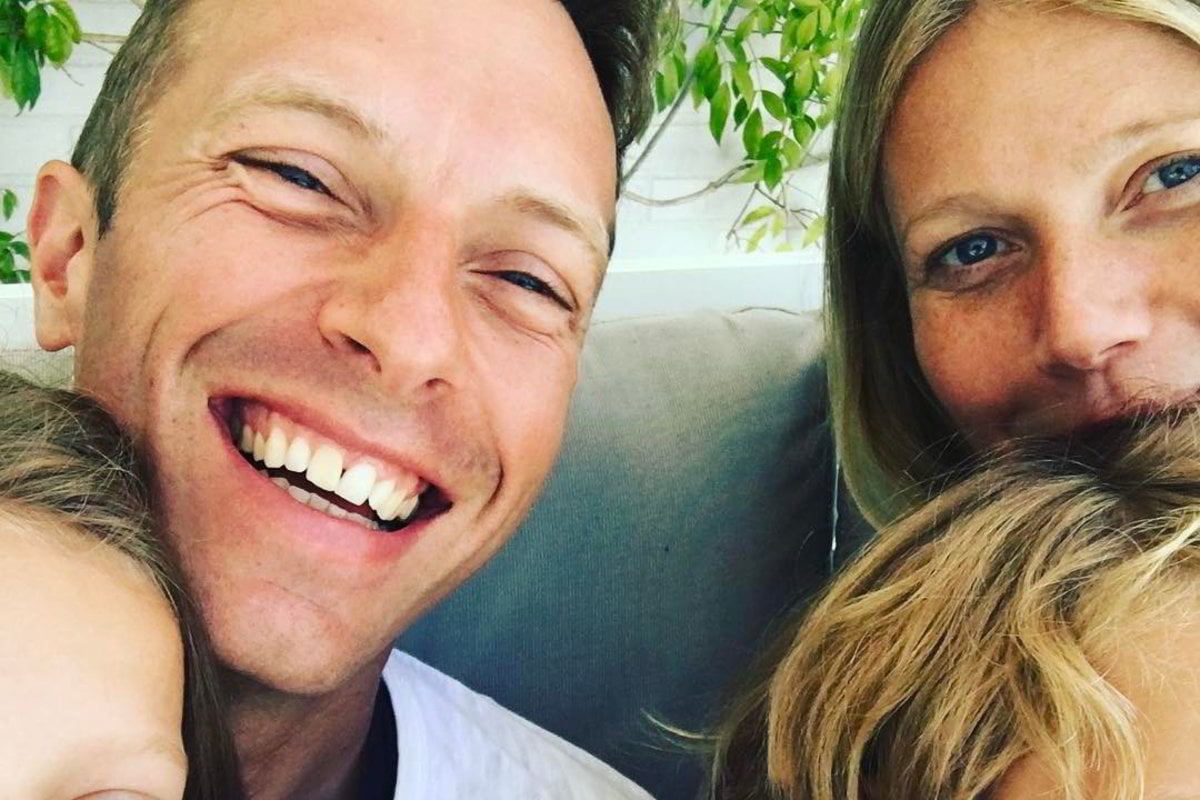 A remote cottage in the Tuscan countryside sounds like an idyllic place for a romantic getaway, but for Gwyneth Paltrow it was the setting where the cracks in her marriage became hard to ignore.

It was the end of summer and a celebration of her 38th birthday. The small cottage where she and then-husband Chris Martin were holidaying was cosy and romantic, on the edge of a forest. There were long walks and sleep-ins and plenty of Italian wine, but despite the picturesque location, Paltrow remembers knowing her marriage was over.

It was the beginning of what they would, years later, announce as their 'conscious uncoupling'.

Mamamia confessions: When I knew our relationship was over. Post continues below video.

"What I do remember is that it felt almost involuntary, like the ring of a bell that has sounded and cannot be undone," Paltrow wrote in an essay for British Vogue.

"The inadvertent release of a helium balloon into the sky. I tried to quell that knowing, to push it far down. I tried to convince myself it had been a fleeting thought, that marriage is complicated and ebbed and flowed. But I knew it. It was in my bones.

"At first, I was moderately successful at turning the volume down on that knowledge. It would be years until we said the words aloud. But, that weekend, a dam had cracked just enough to hear the unrelenting trickle of truth. And it grew louder until it was all I could hear."

In 2002, Paltrow, now 47, met Martin, 43, for the first time backstage at a Coldplay concert. It was just three weeks after her father Bruce's death from throat cancer, and Martin wrote Coldplay's hits 'Fix You' and 'Swallowed in the Sea' to comfort Paltrow during this time.

In an interview with Jonathan Ross, Paltrow said she couldn't listen to the latter without crying.

"I'm amazed [Martin] stuck with me, because I was a wreck," she said.

After a whirlwind year-long relationship, Paltrow and Martin married in a December 2003 ceremony so secretive that no family members, including Paltrow's mum, attended.

She was pregnant at the time, and in May 2004, Apple Blythe Alison Martin was born.

The name announcement was controversial, which Paltrow discussed with Oprah in August 2004.

In April 2006, Paltrow and Martin had Moses Bruce Anthony Martin, named after a song Martin wrote for Paltrow before their marriage.

Throughout their marriage, Paltrow and Martin kept things private. So private, they could go months without being seen in public which would spark breakup rumours.

In 2009, she told Elle UK the rumours didn't bother them.

"It doesn't behoove us to be a public couple. He certainly doesn't want to be that. We've never ever walked down a red carpet together, we never will. If people think that that means we're not together, then - ha ha ha - so be it." 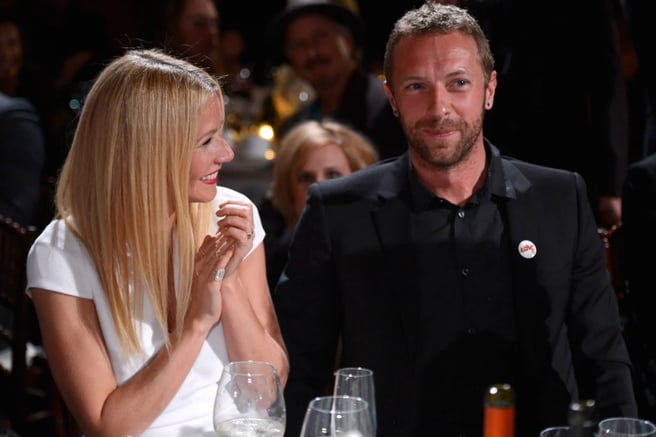 In her British Vogue essay, Paltrow said she and Martin had a solid friendship and from her moment of realisation in Italy, to when they officially announced their split in 2014, they "tried everything".

"The questions, both philosophical and tactical, seemed unfathomable: who sleeps where, how does bath time work, what do we say to the kids? I bent myself into every imaginable shape to avoid answering them. But one day, despite all our efforts, I found that I was not at a fork in the road. I was well down a path. Almost without realising it, we had diverged. We’d never find ourselves together in that way again."

She was determined to ensure their divorce was nothing like others she had been privy to. She wanted their family to remain together, just differently. She wanted meals and holidays together. She wanted them to laugh and have fun and her family to see Martin as a member of the family, still.

﻿Paltrow wrote that she, like most of the world before she introduced us to it, had never heard of the term 'conscious uncoupling', and honestly, she thought it "sounded a bit up itself" at first.

But after realising it offered an opportunity to break up without losing "everything", Paltrow and Martin, famously, 'consciously uncoupled' a year before they announced it to the world.

Nothing like father/daughter love. Happy Father's Day to you, CAJM 🌟🌟🌟. Here is to all the engaged and present fathers, you create a backbone for society. We honor you all today 💗💗💗

In May 2014, Paltrow posted their breakup announcement to Goop, adding the term 'conscious uncoupling' to our lexicons.

"We have been working hard for well over a year, some of it together, some of it separated, to see what might have been possible between us, and we have come to the conclusion that while we love each other very much we will remain separate," the statement said.

"We are, however, and always will be a family, and in many ways we are closer than we have ever been. We are parents first and foremost, to two incredibly wonderful children and we ask for their and our space and privacy to be respected at this difficult time. We have always conducted our relationship privately, and we hope that as we consciously uncouple and co-parent, we will be able to continue in the same manner."

Paltrow wrote she wasn't prepared for the backlash and mockery the announcement generated, but she is now used to it and believes society has become more willing to accept this type of breakup.

In 2016, Martin gave his first interview since their separation to the Sunday Times, describing it as "a weird one".

"It's always out there in the media, but I have a very wonderful separation-divorce. It's a divorce, but it's a weird one.

"It's funny. I don't think about that word very often - divorce. I don't see it that way. I see it more like you meet someone, you have some time together and things just move through. I've lived a lot of life since then."

The pair have remained on excellent terms since their divorce was finalised in July 2016, being a model example for successful co-parenting.

In January, Paltrow told Harper's Bazaar their relationship is a constant work-on.

"It's not like there's a finish line: 'Oh, we consciously uncoupled; we're done," she explained.

"It's a lifelong commitment to constantly reinvent your relationship with your ex, which you do presumably because you have children together. But I think we put all the hard work in at the beginning. I would say very rarely is it difficult now. We've learned how to communicate with each other. We love each other. We laugh. We have the best of each other. It's really nice. It makes you feel like you don't have to lose."

The relationship was made public in 2015, and they got engaged in January 2018. They married six months later in July.

Then, they went on their honeymoon with her children and his children. Oh, and her ex-husband tagged along.

After the honeymoon, Paltrow told Kelly Ripa and Ryan Seacrest on Live with Kelly and Ryan she and Martin maintained such a good friendship for the sake of their children.

"We just wanted to minimise the pain for the kids," she said.

"They just want to see their parents around the dinner table, basically, so we try to keep that."

Happy Father’s Day to all of the dads out there. Sending you all love ❤️

They also spent Thanksgiving and Christmas 2018 all together, with Martin's girlfriend Dakota Johnson.

She had previously said Martin had become "like a brother" to her.

"We're still very much like a family, even though we don’t have a romantic relationship. He's like my brother," she told Glamou﻿r﻿ magazine.

The actress also told Marie Claire Australia that she believes they're better as friends.

"I think we are better as friends than we were [married]. We are very close and supportive of one another," she said.

Happy Birthday CAJM. This is a special one. We love you so much. #42

In British Vogue, Paltrow wrote about balancing her different relationships with Falchuk and her ex-husband.

"It's OK to stay in love with the parts of your ex that you were always in love with. In fact, that's what makes conscious uncoupling work. Love all of those wonderful parts of them. They still exist, they can still make you feel the way you felt for that person.

"Rather than shutting them out, lean into the unfamiliarity of those feelings and explore them. We lose all the nuance of life when we make it all bad or all good. Even when they are young, children understand that love takes multiple forms," she said.

"I know my ex-husband was meant to be the father of my children, and I know my current husband is meant to be the person I grow very old with. Conscious uncoupling lets us recognise those two different loves can coexist and nourish each other."

Reply
Upvote
3 upvotes
I think there is a lot to criticise Paltrow for, but conscious uncoupling is not one of them. This is how break ups should be, especially when kids are involved. They should be commended for this.
R
random dude a year ago

Reply
Upvote
2 upvotes
@laura__palmer Yeah, but nah. It's already called being a congenial, mature adult in response during a separation.
Adding conscious uncoupling just sounds incredibly wanky and pretentious - but what do I know, I'm not a butcher, baker or (strangely scented) candlestick maker.
M
mamamia-user-482898552 a year ago