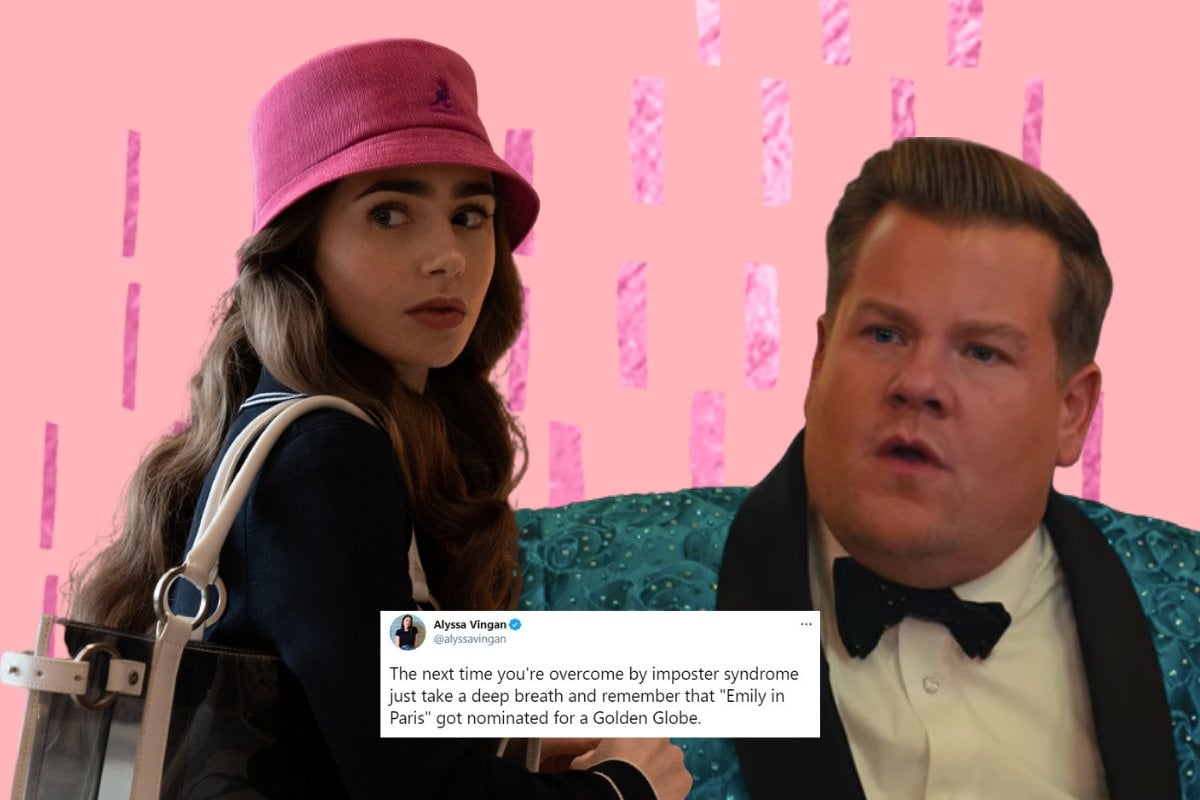 The Golden Globes nominations have been announced and hoo boy, the people are... mad.

You see, they're are a bit strange.

The Crown, Schitt's Creek and Ozark lead the pack of television nominees, which also included newcomers The Great, Ted Lasso, The Flight Attendant and Emily in Paris.

Yes, as in the Emily in Paris we all knew was a truly nad show, yet watched the whole way through.

Watch: The trailer for I May Destroy You, arguably this year's biggest snub. Post continues below video.

For the first time ever, female filmmakers have the majority of nominations in the director category. Top contenders in the film categories include Nomadland, Promising Young Woman and The Trial of the Chicago 7.

There is controversy over the nomination of Sia's film Music, which has faced criticism for casting a non-autistic woman in the role of the non-verbal title character.

Other nominations receiving objections include James Corden for Best Actor-Comedy or Musical for his role in The Prom and the major snub of actress Michaela Coel and her drama I May Destroy You, which documented the aftermath of sexual assault.

Given the widespread panning of Corden's performance, and the major critic and public praising of I May Destroy You, the noms do seem out of touch with the actual world, outside of the Hollywood bubble.

And social media sure did make its feelings known.

Winners will be announced during a televised ceremony on February 28 but before then, please see below for all the thoughts, feelings and... memes about the Golden Globes nominations.

not the golden globes snubbing zendaya two years in a row pic.twitter.com/3mctT9B0Fu

JAMES CORDEN was nominated for a golden globe but not pedro pascal?!?!?! https://t.co/kKdBqMrmgF pic.twitter.com/51zNPytOuk

it's that time of year again pic.twitter.com/T1h6PrsuJp

i may destroy the golden globes

creators just need to rebrand.
I MAY DESTROY YOU IN PARIS
MINARI IN PARIS
DELROY LINDO IN PARIS#GoldenGlobes

Why stop there? Give Emily in Paris the Nobel Peace Prize

Wait — so the hollywood foreign press really looked at their ballots and picked Emily in Paris over Insecure. And Lily Collins over Issa Rae. They really did that. #GoldenGlobes pic.twitter.com/fAk8kZel1m

Emily in Paris but not Michaela Coel. Ok. pic.twitter.com/TeYlRngSXa

The next time you're overcome by imposter syndrome just take a deep breath and remember that "Emily in Paris" got nominated for a Golden Globe.

Emily In Paris receiving a golden globe nomination instead of I May Destroy You? pic.twitter.com/suZyZEnjUt

Emily in Paris got a Golden Globe nom...
I May Destroy You didn’t... pic.twitter.com/gpCzJSCFXO

the golden globes are making liking the prom even more embarrassing for me pic.twitter.com/sFncy04qzS

What bullcrap timeline are we living in where Music gets nominated at the Golden Globes!? pic.twitter.com/piHYpM93To

This entire catagory is my villain origin story https://t.co/rocfslZoMB

the golden globes managed to nominate 3 female directors but also nominate the heavily ableist movie, Music. it’s always one step forward and 2 steps back it seems

Me: The Golden Globes aren't real, they can't hurt you

No it’s actually CRIMINAL to not recognize Michaela Coel for what she did, not just w trauma or sexual assault or consent, but w friendship and art and power and healing! I May Destroy You was an artist executing a singular vision, pure and focused #GoldenGlobes

So what... ‘I May Destroy You’ never happened orrrr?!?!?! pic.twitter.com/irsfyiu8hh

me: i wont let award season upset me

also me after seeing minari (usa) under the foreign films category and steven yeun erasure:pic.twitter.com/QxEwjnIa9D

“I May Destroy You” is one of the most creative, devastating, forward-thinking seasons of TV I’ve ever seen and the fact that it got no Golden Globes nominations while Emily In Paris got a bunch is pretty gross