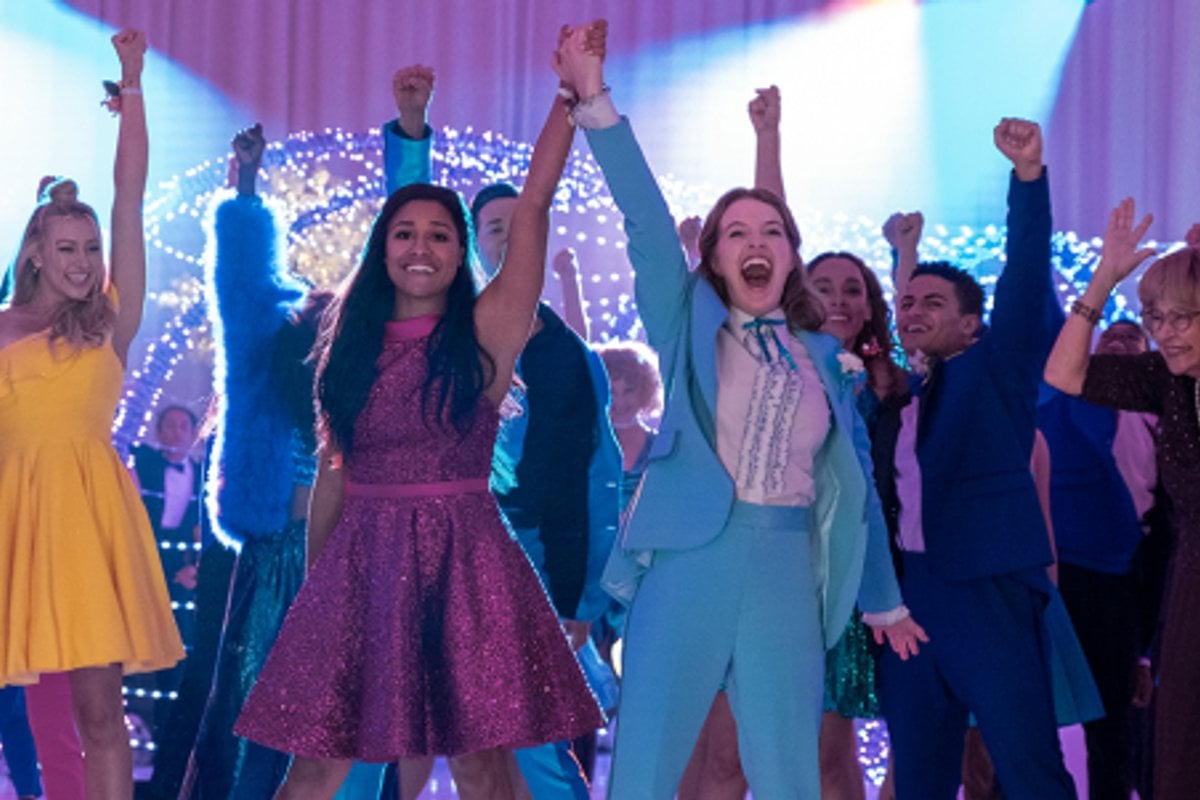 Last week, my girlfriend and I watched The Prom on Netflix.

I adored it and have watched it many times since. It's the rainbow celebration we all needed growing up. I haven’t seen a live production of this show, but I would love to, because it is simply bloody joyous.

It makes me so happy to know that young people who are part of the LGBTQI+ community might see themselves represented on-screen in a rom-com musical and realise that even if the people or ideas in their everyday lives don’t tell them, they are perfect the way they are.

Selfishly, it also makes me a little sad for my 14-year-old, musical theatre-loving self who would have felt so seen by this story and might have had the courage to come out and be truly happy and herself, years before she would.

Watch the trailer for Netflix's The Prom. Post continues below.

I’m 25. My generation has it a lot better than those who came before us, that’s true. But it’s still nowhere near great though.

I had a best friend; she lived with my family for a period and we became even closer. One night we were making food in the kitchen together and had a fun night and fell into a food coma. The next day at school, my “best friend” told the rest of our friend group that she thought I was a lesbian and was hitting on her because I was “too close” while we were cooking. They all confronted me and asked if I was gay. I, of course, denied it. Me, gay? Pfft. Ew! Girls are gross, I liked boys, I protested.

Despite my protests, they were truly sh*tty teenagers to me for a while. The funny part is, I didn’t even have a crush on her but that was the moment I knew... I knew if I told my friends how confused I was feeling - that I didn't have a crush on that friend I’d been texting outside of school, but I did have a crush on his girlfriend - they wouldn’t support me and things would not be okay.

P.S. the girlfriend’s name was Emily and I don’t think she knew I existed, but I started listening to the rock bands she had posted about on her Facebook in case we ever actually had a conversation and I would tell her how much I loved Tonight Alive and then we would obviously fall in love and she would break up with her boyfriend and we would live happily ever after… Anyway, I digress.

I decided I was just a later bloomer than my friends. I would force myself to like boys. I got pretty good at pretending, I even dated a guy for five years (lol, super sorry for wasting your time there bud, oopsies). When he asked if I was a lesbian a year into our relationship because of my love for The L Word, I began to watch it in secret. Watching a show about a group of gay women obviously means you’re a lesbian, duh! (To be fair, it did in my case and that probably wasn’t the only clue).

The L Word, like many a lesbian in my age group or older, was the only blueprint I had for queerness, but I didn’t identify with this group of Californian women much older than me. There was that cute bisexual girl who was on One Tree Hill for a hot minute there, Anna, but they quickly removed her after she kissed a girl. Oh, how I fell in love with Anna.

As you can see, I was reaching here, any and all queer representation was devoured over and over and over again while I tried to come to terms with who I was. So many nights through the years I would have a few drinks and want so badly to spill the feelings inside of me. I made jokes about giving up on boys and becoming a lesbian to see how people react, but I struggled to find the courage to tell those closest to me I was gay.

I spent years not telling a soul how I truly felt, doing all the online questionnaires about if I was a lesbian or ‘normal’ like my other friends. Having a gay guy in my friendship groups was okay with them if they were the camp stereotypical ‘gay best friend’, but if they thought a girl at school was gay they would bully them and make sure to make a big deal about not getting changed in front of them before P.E. I was already so insecure, I just didn’t want to make it worse. 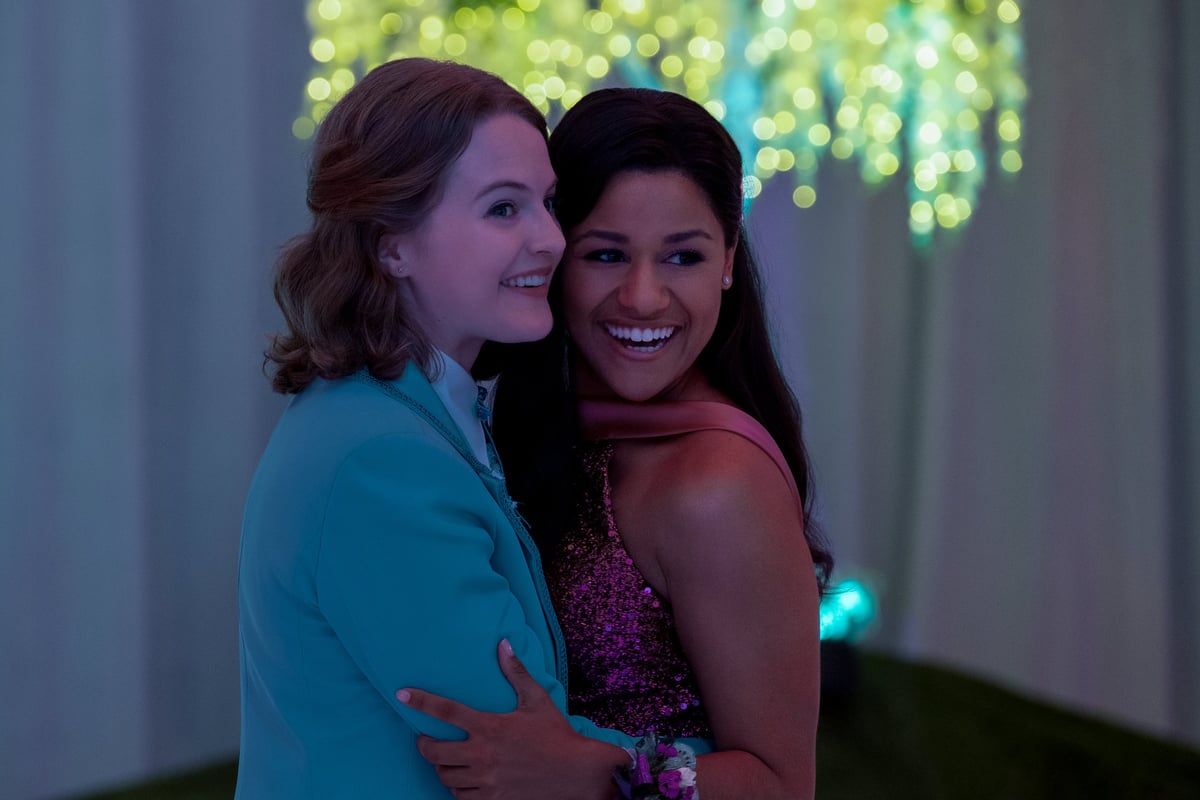 'I needed a film like Netflix's The Prom growing up." Image: Netflix

Over the years, I became more stuck in my lie and I was so ashamed of my feelings and scared. I longed to be 'normal' like my other friends. I knew that two of my sisters would absolutely be supportive, but every time I went to tell them, the words would get caught on my tongue.

If I had a story like The Prom when I was younger, I truly wonder if I could have used it as a conversation starter with my family and friends and could have admitted who I was because I saw myself represented in a positive, romantic storyline.

I’m a white, ‘femme’ presenting lesbian from a middle-class (I think?), pretty liberal family. I’m not trying to say I had it hard, I’m lucky as far as the intersections of sh*t to deal with goes and yet, seeing myself represented by two queer women in this story means all of the things. I can’t even imagine what having the incredible Ariana DeBose, an Afro-Latinx, queer woman, as one of the stars of this gay love story must mean to so many people.

In conclusion, watch The Prom on Netflix. Listen to some show tunes to see out this sh*tty year, and try to be the person that someone might just feel comfortable coming out to. If you’re part of the LGBTQI+ spectrum and hiding, I really hope you find your people and get to tell people who you are, because life can be so much better.

The Prom is available to stream on Netflix.