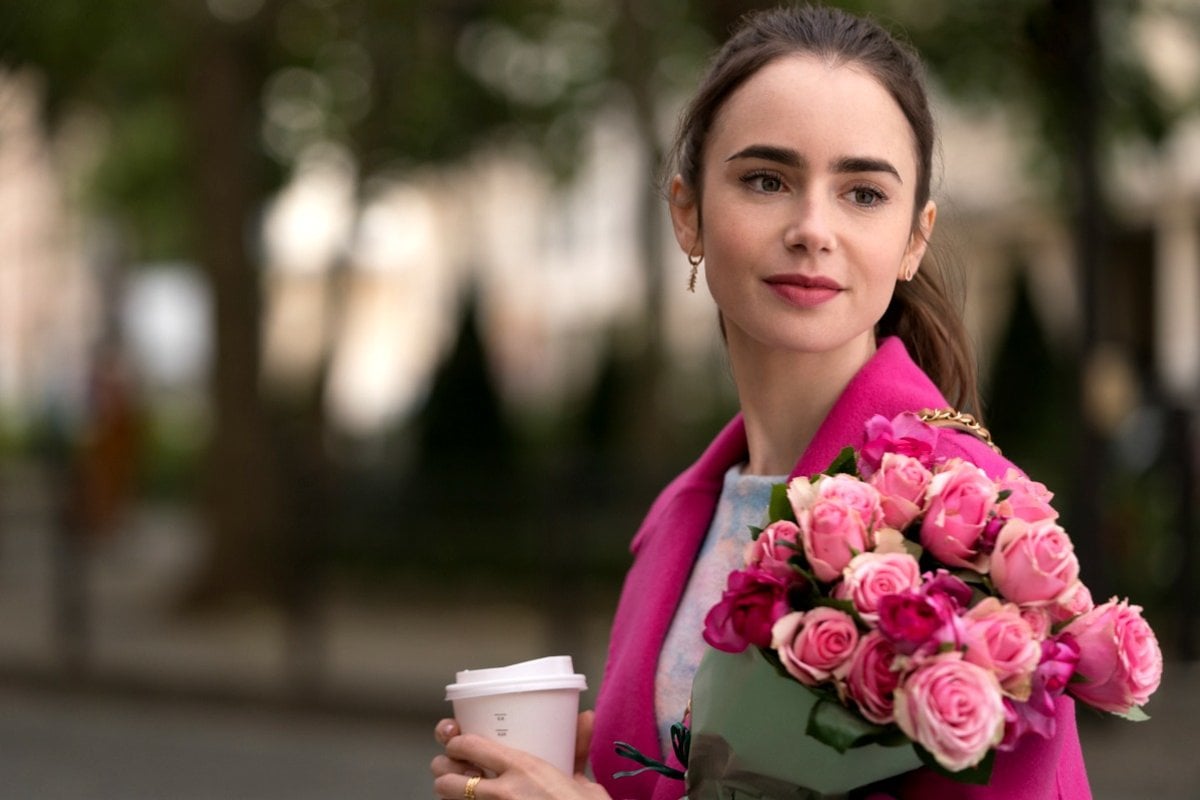 Watching Emily in Paris, Netflix's new rom-com series, is like having a one-night stand and then being disappointed when it doesn't immediately result in a wedding.

There's not enough substance or character development within this frothy TV confection to warrant a long-term watching relationship, but for a swift and entertaining binge-watch, it's the perfect weekend partner.

Prior to the release of this new 10-part Netflix series, it was widely hyped across multiple media outlets as the new Sex and the City. Yet, apart from the fact that both shows stem from the same creator, Darren Star, and feature a woman running around a city in a pair of inappropriate shoes she probably can't afford, the two shows don't really share any DNA.

In the series, Lily Collins stars as Emily Cooper, a social media strategist from Chicago who, through a twist of fate only found in a rom-com, is unexpectantly transferred to a job in Paris and finds herself living a new adventurous life in the city of love.

Despite the fact she does not speak French.

I thought after it became clear that reality TV shows like The Hills were all a setup, that plot points like this, around young women suddenly being transferred to magical new lives thanks to their starter jobs, might have been dropped as plot points by 2020. 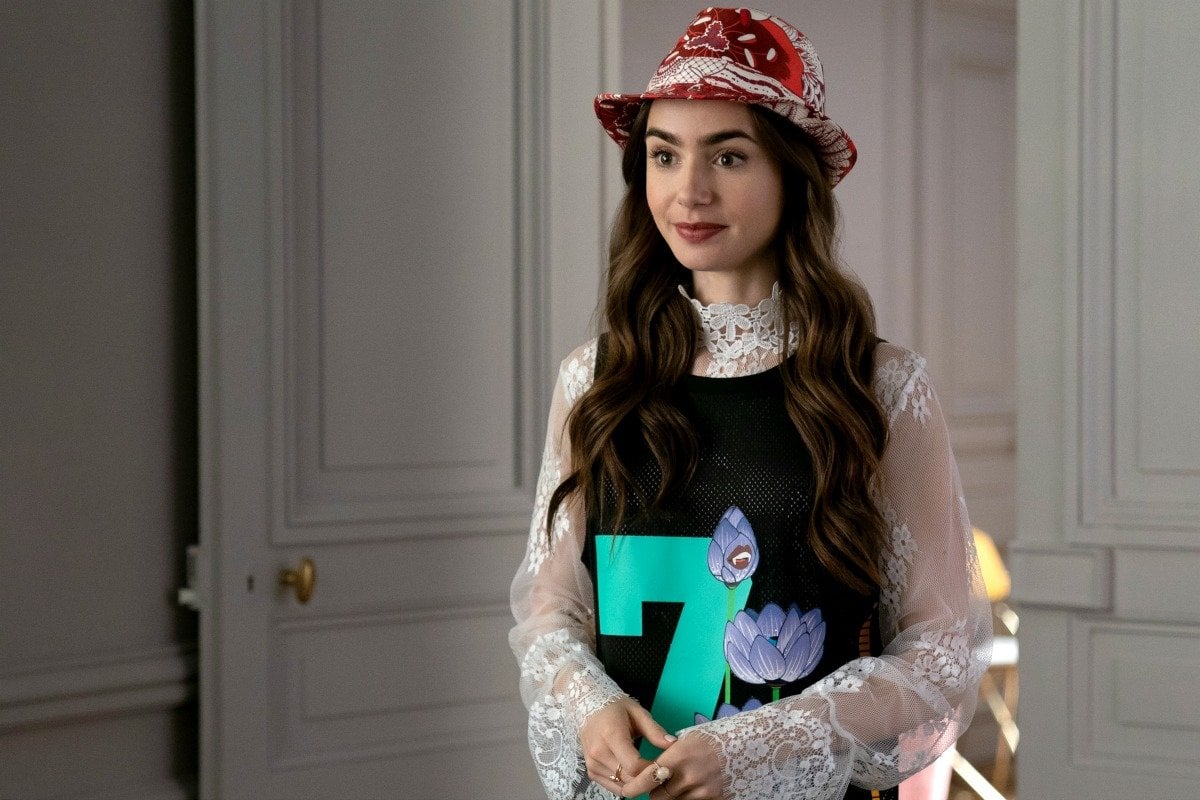 Lily Collins stars as Emily Cooper, a social media strategist who moves to Paris for work despite the fact she does not speak French. Image: Netflix.

Along with her footwear and inability to speak the language, Emily's biggest barrier to truly enjoying her magical new Parisian life is her co-workers. The people working alongside her in the marketing of luxury goods question (quite justifiably) exactly what she's doing there and initially give her the cold shoulder.

In many ways, Emily in Paris, falls into the predictable rom-com tropes and traps that have plagued the genre for years.

Emily's initial foe is her older co-worker Sylvie (Philippine Leroy-Beaulieu) even though it's difficult to place exactly why such a successful woman would take time out of her day to terrorise the young American. To the point where it starts to feel like a poor woman's The Devil Wears Prada.

In a similar vein, her new love interest Gabriel (Lucas Bravo) conveniently lives in the same building that Emily now calls home. He also seems to think it's endearing, rather than frightening, that Emily cannot remember where her apartment is and is constantly trying to force open his door.

However, the biggest trope here is that Emily's new Parisian BFF Mindy Chen (Ashley Park) joins the long line of supporting rom-com characters who are more interesting than the cookie-cutter leading ladies whose stories they are there to progress.

While watching them on-screen together, I couldn't help but wonder what an infinitely more watchable show this would be if it had been revamped to Mindy in Paris. 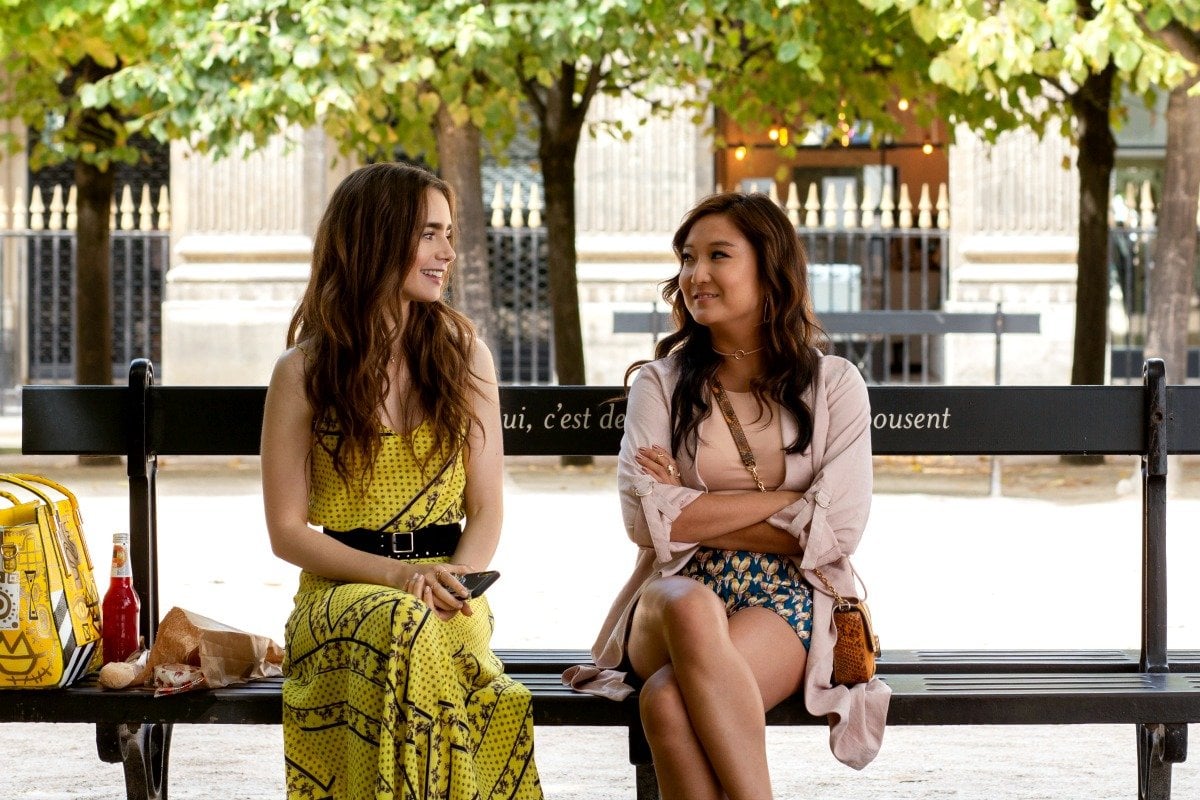 Despite these flaws peppered throughout the series, Emily in Paris still has a lot to offer in terms of light escapism.

The clothes are glorious (this is perhaps the only moment you might get a slight Sex and the City twinge in your heart) and the lush backdrop of Paris, as always, adds a sense of high octane magic to the story unfolding on screen.

The watchability of Emily in Paris also firmly comes down to the leading performance of Lily Collins, who has just enough sweet on-screen charisma to make Emily likable, even in the moments where's she's enacting the worst kind of millennial stereotypes.

There are also genuine moments in the series when you can get swept up in that excited feeling of falling in love with a city, a job or a person for the first time, all seen through Emily's eyes.

Emily in Paris, while lightly championing female sexuality and feminism, is also in fairness a TV show that has shown up to the party not attempting to break any new ground.

A TV show that is perfectly happy to be the icing, rather than the cake.

But at this point in 2020, we could all do with a little extra sweetness.

You can now watch all 10 episodes of Emily in Paris on Netflix.

Reply
Upvote
1 upvotes
Am I going mad, or have I read this exact article three times with three different titles?
dee 4 months ago

Reply
Upvote
Paris is by far the biggest attraction in this series. The very first episode, felt extremely rushed,  showing Emily moving virtually overnight to Paris, with no mention or discussions of such a big move with any of her family members, like parents . Apart from a boyfriend, we learn nothing of Emily's life in Chicago prior to moving to Paris.
The next episodes do thankfully improve, but Emily does appear to be a very 1 dimensional character, constantly so chirpy and upbeat- no wonder her fellow French co workers find her a little bit too much!
News
General
Opinion
True Crime
Politics
Sport
Explainer
Entertainment
Celebrity
Reality TV
Movies
TV
Books
Rogue
Royal
Lifestyle
Beauty
Fashion
Weddings
Home
Wellness
Health
Fitness
Travel
Food
Parents
Before The Bump
Pregnancy
Baby
Kids
Teens
School
Parent Opinion
Work & Money
Money
Finance
Career
Lady Startup
Relationships
Sex
Dating
Separation
Friendship
Family
Real Life
Couples