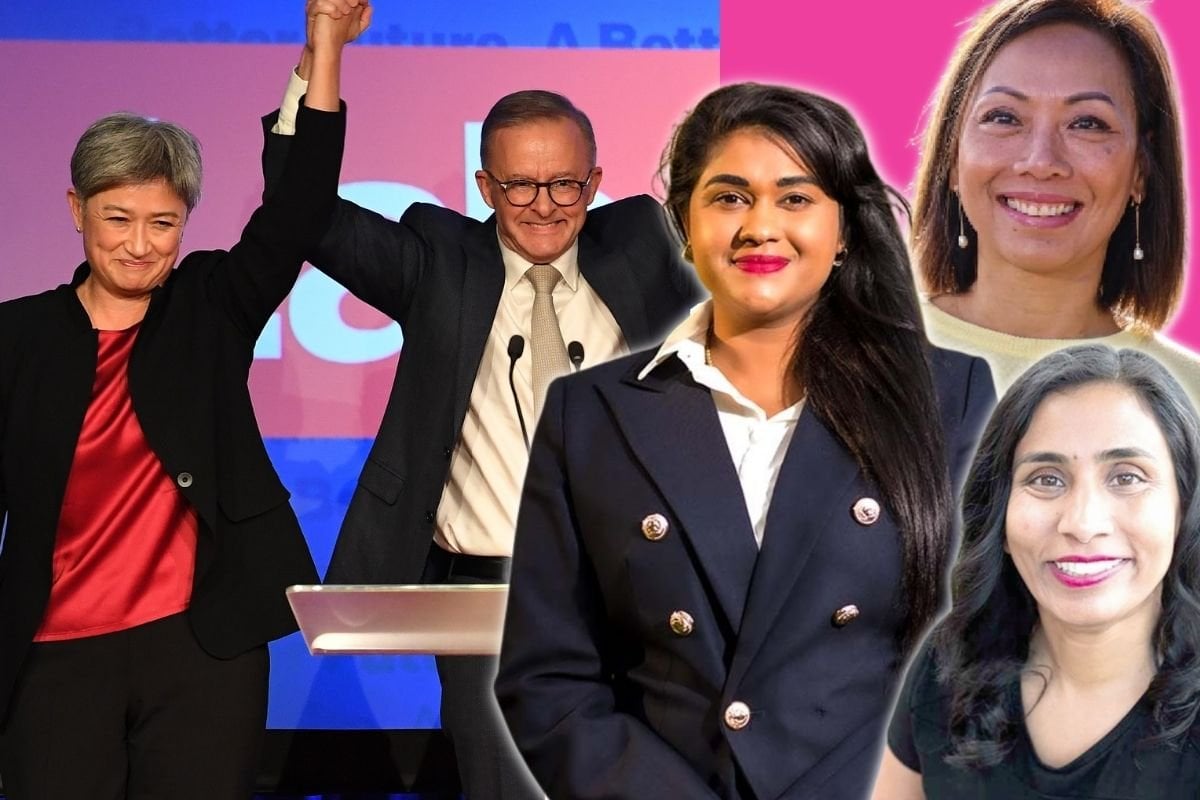 I want to ask you a favour.

Put aside who you voted for in last weekend's federal election.

Just for a minute, please.

With rejoice or regret - depending where you sit - still hanging heavily in the air, many of us are deep in political feels right now, I know. And here I am asking you to pop it all aside for a moment, and just… look at a picture.

Yes. Because, as the old adage goes, it’s worth a thousand words.

A picture doesn’t just offer you a portal into a situation in front of you; it can reflect back on us too. On society.

And so, when my TV screen was illuminated on Saturday night, with the sight of Penny Wong introducing Anthony Albanese as the 31st Prime Minister of Australia - the picture struck me. 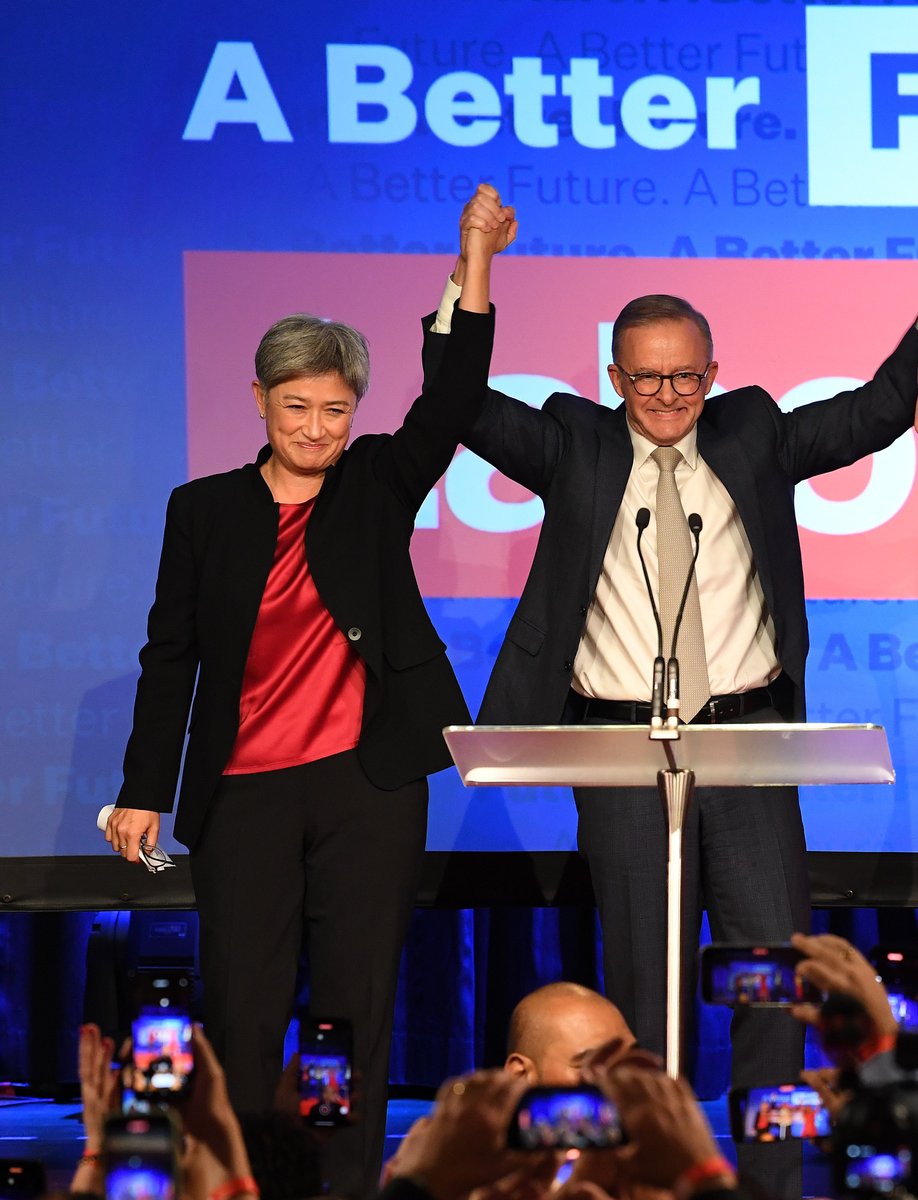 Penelope Ying-Yen Wong is a woman; a woman of mixed Malaysian-Chinese and Australian heritage.

She is the first openly gay woman who is a federal member of parliament.

Now, Wong is the first foreign-born, foreign minister of Australia.

The name is an overt divergence from Morrison and Rudd and Howard and Hawke and every Canberra suburb back to Barton. And the butt of cruel jokes throughout the campaign.

Because Anthony Albanese’s father was Italian, and now Albo is the first Aussie PM who is not of Anglo-Celtic ancestry.

And there on stage, hands linked and pumping the air, stood an elated Wong and Albanese; each the children of one overseas-born parent - just like 46 per cent of all Australians.

Those of us with identity that does not fit into a single. neat. box. That persists and defies expectations and is.

It was a picture of modern, multicultural Australia.

And it reminded me of another picture that stays with me.

At 10 years old, I stood in the hallway before the principal’s office. A large framed photo hung from the wall: A maroon blur of ties and blazers, 600-odd prep-to-12 students of the school. And there I was: thick, black wavy hair, tanned skin, and a thick eyebrow (It was four years before I discovered wax. Go easy.)

Standing one metre back, you could pinpoint me with ease.

I looked 'different'; the child of a Maltese-born father, and Australian Ashkenazi Jewish mother.

And I remember what it felt to be the only one. Literally. I was the only person of Maltese-heritage in the school, and my mum and I were the only Jewish people in our Victorian regional city at that time.

And when you are reminded by your difference by casual or overt comments, and don’t see anyone else who looks like you in your immediate sphere or in celebrated highly-visible positions (like, a Prime Minister, or celebrated media personalities on TV, or even a model in a Myer catalogue), you subconsciously receive a message that there is no place for you. You are not of value. You don’t belong.

"I want Australia to continue to be a country that no matter where you live, who you worship, who you love or what your last name is, that places no restrictions on your journey in life,” he proclaimed.

The appointment of Albanese and Wong to two of the highest offices in the land is not the full story of multicultural celebration in this election.

As reported in The Age yesterday, the incoming federal parliament is a "watershed moment" for diverse representation.

Before I get into that, it would be remiss not to mention even some of those diverse few Liberal MPs who lost their seats - the first Indigenous lower house member, Ken Wyatt; now former federal treasurer, Josh Frydenberg, a Jewish-Australian whose great-grandparents and relatives perished in the Holocaust; Dave Sharma, the country’s first federal MP of Indian descent; and Hong Kong-born, Gladys Liu. They are an undeniable loss - most especially for the Coalition and minority communities they inherently also represented.

But this is what the new parliamentary picture looks like: 13 members of parliament - 10 of whom are women - are from non-Indigenous, non-European backgrounds.

Three new Indigenous MPs will be welcomed, an all-time high of 10 Indigenous representatives.

There will be double the number of Asian-Australian federal MPs, including eight women.

Worth mentioning that after last night’s results in WA, the Australian parliament will look a little more like the country it represents.

Sam Lim and Zaneta Mascarenhas heading to the house of reps, while Fatima Payman still hoping for a senate spot @SBSNews https://t.co/JAdMNuczK9 pic.twitter.com/RFk3fNSJdu

Like, Dai Le, the Independent member for Fowler, who arrived to Australia as a child from Vietnam. She is the first Vietnamese-Australian refugee to serve as a federal MP.

Cassandra Fernando, the new MP for Holt, is the first Sri Lankan-born woman to be elected into federal parliament.

Zaneta Mascarenhas’ parents migrated to Australia in the late-1970s from Goa, India. She has become the first woman to represent the electorate of Swan.

And Fatima Payman – who came to these shores as a Muslim-Afghan child refugee – is also on her way to becoming WA’s Labor Senator.

Labor candidate Fatima Payman (WA Labor for Senate) who resettled in Australia from Afghanistan in 2003, is ahead in the contest to win WA’s sixth Senate seat!
Her election would make her the first Afghan Australian & the first hijab wearing Australian Muslim woman in Parliament! pic.twitter.com/8ooA0wt2Z2

Politics aside, these women bring more with them than a new title; they offer hope to so many people in this country, long unseen.

Adrienne Tam is a Chinese-Australian woman - and my colleague - Mamamia's Senior Features and Opinion Writer. She reflected, “Forget about dating reality TV shows - this is where representation really matters."

"It's a great feeling to know that whatever your ethnicity, you can represent your community and your country. You are not simply 'other'. You can belong."

Her sentiments were echoed by another of our colleagues, co-host of the Mamamia’s Lowbrow podcast and social media producer, Emily Vernem. Born in Australia to Indian parents, she expressed her pride in seeing the election of "these amazing women".

"It’s something that I genuinely believed I wouldn’t see in my lifetime because, yes, things are changing, but from what I’ve seen in my 26 years, it has been slow, and at times even halted."

She's right. While the numbers towards diversity have improved (around 6 per cent), they are a far lag behind the estimated 21 per cent of Australians who come from non-European backgrounds.

So yes, the picture matters.

Because it sends a message - to those people pushed to the margins, who are unfairly charged with breaking barriers that shouldn't exist in modern Australia.

Like, for the kid being raised in public housing by a single mum who is doing her best on a disability pension.

It’s a visual statement that says it's okay to dream and "reach for the stars".

And really, anything is possible.

Keen to read more from Rebecca Davis? You can find her articles here, or follow her on Instagram.

Reply
Upvote
2 upvotes
I thought Albos mum who raised him was Anglo-Aussie. I don’t think he met his father until he was an adult. As a child of migrants who was constantly asked where I came from despite being born in Australia I find it a bit weird. I don’t think he had my migrant child life experiences.  It’s insulting to our intellect to erase the other half of his parentage especially because she was a sole parent.
S
summer a month ago

Reply
Upvote
1 upvotes
@mb1111 This might be true, but does the fact that he was raised in housing commission by a single mother not also count? That he wasn't an entitled rich kid who went to a private school? Maybe he didn't have a migrant experience but he certainly didn't have the childhood of most old-school politicians, I don't think you can say that it's 'insulting to our intellect' to dismiss him outright for not being a migrant. He had the experience of coming from a poor, disadvantaged background, I understand that the focus of this article is on ethnic diversity so perhaps he's not the best example, but he is certainly not your average wealthy Anglo politician.
M
mb1111 a month ago

Reply
Upvote
1 upvotes
@summer I was referring to using his surname to include him in an article on ethic diversity. Kudos to him for striving and achieving despite not being born with wealth and privilege. However he is simply not ethnic in the way that the other people and myself are. Including him just because of his surname is patronising. It takes nothing away from his achievements to point this out.
News
General
Opinion
True Crime
Politics
Sport
Explainer
Entertainment
Celebrity
Reality TV
Movies
TV
Books
Rogue
Royal
Lifestyle
Beauty
Fashion
Weddings
Home
Wellness
Health
Fitness
Travel
Food
Family
Before The Bump
Pregnancy
Baby
Kids
Teens
School
Parent Opinion
Work & Money
Money
Finance
Career
Lady Startup
Relationships
Sex
Dating
Separation
Friendship
Family
Real Life
Couples