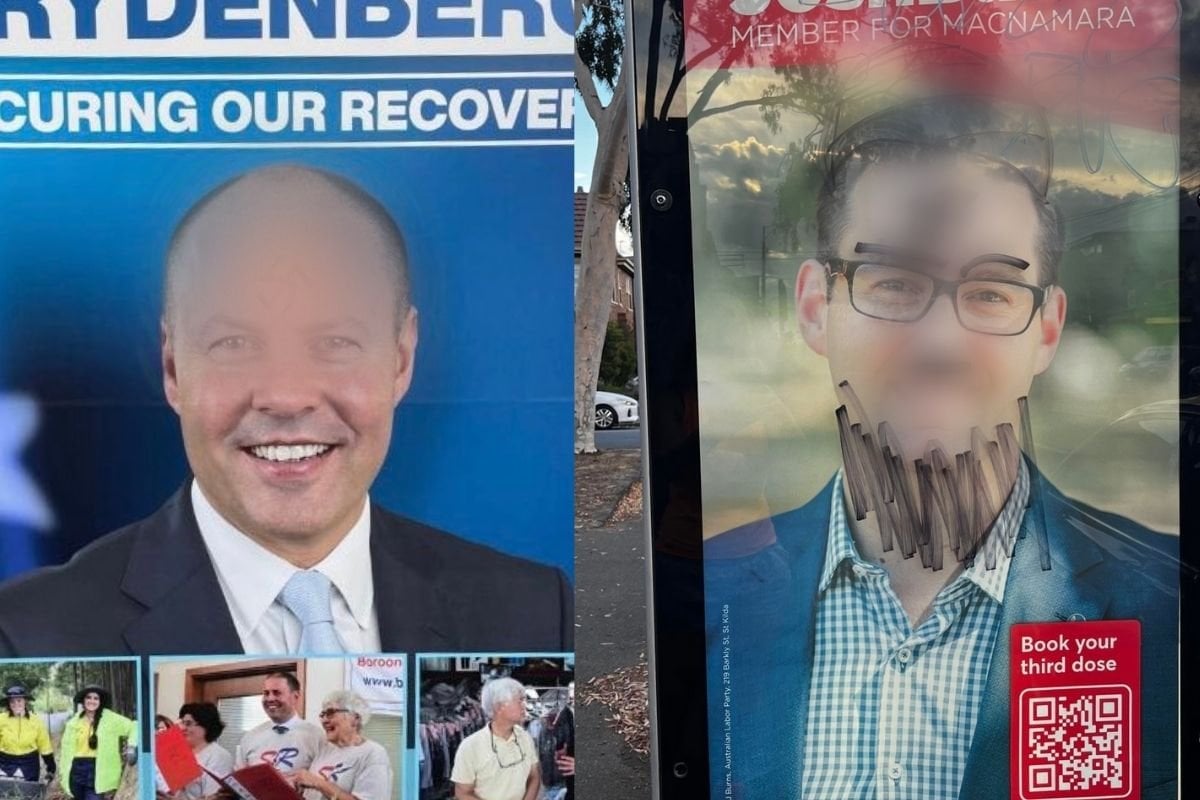 The swastika is more than a criss-cross of jagged lines, or a symbol of history from time long ago.

As a Jewish person, part of me wishes it was just that.

But it is forever a part of our present - etched into our identity. "Never forget."

And yet sadly, it is brandished by those who choose to weaponise it against us.

Treasurer and Jewish Australian Josh Frydenberg on the rise of antisemitism. Article continues after video.

Because the swastika doesn’t just represent the regime of the Third Reich. It represents all that the Nazis and their collaborators destroyed under it.

It is the burning of our sacred books, and the pilfering of homes where families once ate together, and the broken glass of our shopfronts. It is starvation in the ghettos. And nakedness in forest ravines. And the camps, the camps where all that remained are piles of well-worn shoes.

The swastika is also the loss of millions more - Roma, Sinti, LGBTQI + people and political prisoners. Their lives, stories and histories gone forever too.

So yes, it's a visceral symbol.

On Monday, Federal Treasurer Josh Frydenberg shared a photo of one of his campaign billboards in his electorate of Kooyong.

There, graffitied on his forehead, was a black swastika.

Josh Frydenberg, a Jewish man, the grandson of four European grandparents, whose great-grandparents and relatives perished in the Holocaust.

It doesn’t get more personal.

It doesn’t matter which political group is on the receiving end, it’s just not on. Our community deserves better.

Swastikas are a reminder of a dark past & it’s our collective duty to say “Never Again.” pic.twitter.com/W2cZTkYSBG

Speaking with Mamamia, Frydenberg reflected on the act as "an insult to the victims of the Holocaust and every Australian serviceman and woman who fought against tyranny in our armed forces".

He continued, “It is concerning that in Australia in 2022, more than 75 years since one of the greatest crimes against humanity, there are still cowardly and criminal acts like defacing public property with swastikas and symbols of mass murder.”

And it’s not the first time it’s occurred.

Mamamia understands there have been at least a half a dozen incidents since February where the treasurer’s billboards have been the target of antisemitic vandalism.

Worryingly, it appears to be a part of an escalating trend which spans the political spectrum.

On Saturday, Kooyong Independent Dr Monique Ryan shared a photo of a large swastika emblazoned across her face on a campaign billboard.

“There’s no place for hatred in politics. The odd black tooth, sure … but not hatred. We’re better than this,” she tweeted.

There’s no place for hatred in politics.

The odd black tooth, sure ... but not hatred.

In February, Jewish Federal Labor MP Josh Burns also had a swastika daubed on his forehead in a campaign poster.

Speaking with Mamamia, Burns said, the “ugly pattern of behaviour… is never okay, and needs to be called out whenever it occurs”.

There’s no place for the Swastika in Australia.

I’m not putting this up for sympathy - to be honest, I’ve got thicker skin than that.

But I’m putting this graffiti up as a reminder that there are some lines that shouldn’t be crossed. pic.twitter.com/YWlYnkGEMM

Longstanding Victorian Jewish Liberal MP David Southwick told Mamamia that he too has had depictions of his face vandalised with Nazi symbolism many times - especially in the lead up to an election. In 2019, Frydenberg’s campaign signs were targeted with antisemitic symbolism then too, while billboards of Federal Liberal MP, Julian Leeser saw his face brandished with a Hitler-like moustache and swastika.

It’s not new, but it is increasing; as are the incidents of antisemitism more generally, both overseas and in Australia.

In the past year (October 1, 2020 - September 30, 2021), recorded antisemitic incidents in Australia increased by 35 per cent, according to the Executive Council of Australian Jewry’s (ECAJ) Annual Antisemitism Report.

“How could you not be concerned?” ECAJ co-CEO Peter Wertheim told Mamamia.

“Through an erosion of knowledge of Holocaust history and trivialisation of the Holocaust through inappropriate analogies, the cultural taboos against antisemitism have steadily been worn down to a point where it is becoming increasingly normalised.”

“This is a large factor in why we are seeing an upsurge in antisemitic incidents,” says Wertheim, citing elements from the far-left and the far-right who appropriate and harness antisemitic sentiment to peddle their own ideological agendas.

Fellow Jewish communal leader and president of the Zionist Federation of Australia, Jeremy Leibler told Mamamia, “While the use of the swastika to attack Jewish and non-Jewish candidates is clearly motivated by antisemitism, it is reflective of something greater: The deterioration of respectful civil discourse in society today.”

Leibler adds that there is “a complete failure of both of the media and the relevant players to be able to engage in nuanced, thoughtful and respectful debate on important issues”.

And I don’t disagree with him.

Because when it gets to the point where it is necessary for states to mandate laws against the public display of Nazi symbolism - more than 75 years after the Holocaust - that paints a telling picture.

Indeed, following parliamentary inquiries in respective states, the NSW and Victorian state governments are considering introducing legislation to ban the public display of Nazi symbols. The NSW Attorney General Mark Speakman has indicated that a Bill may be tabled in the NSW parliament later this year.

As for Victoria, well, despite inquiry recommendations expected to have been formalised into legislation by now, Mamamia understands from various sources that the Victorian government has stalled, with progress at a standstill over nuance and terminology.

Enough with deliberation. The time for action and consequence is now.

As is, time for debate; robust yet civilised debate, grounded in reasoned argument.

That rises above vitriol and vilification.

And resists attacking an individual because of their religious or cultural identity.

Or exploits the trauma and suffering experienced by their family, because of that identity.

Reply
Upvote
1 upvotes
It's horrifying that people still consider this ok. I've seen an increase in usage in recent years and it worries me that we haven't learnt from past mistakes. We seem to be moving in the wrong direction from a kinder, more inclusive society.
M
m.b.20 2 months ago

Reply
Upvote
3 upvotes
Every single year of my teaching career,  I have to explain that it is not a joke symbol,  not something to graffiti on each other's pencil cases because it's funny.  It's abhorrent and only ramps up after we study the Holocaust. There is something seriously wrong with our teen (boys,  have never had to tell a girl not to use it any form)
C
cat 2 months ago

Reply
Upvote
2 upvotes
@m.b.20 how depressing. I get the desire to be "rebellious" but its horrifying that they do it more after learning about the holocaust.
G
grumpier monster 2 months ago

Reply
Upvote
1 upvotes
@m.b.20, I also observed a lot of swastika graffiti when I was a high school teacher. I was appalled. The Principal didn't see the problem and thought I was making a mountain out of a molehill. I ended up reading a passage to my students from a history book describing a tiny aspect of the Holocaust. (I was a maths and science teacher.) The graffiti petered out. The behaviour of the students was bad, but kids often do silly things because they are young and ignorant. The Principal was more at fault, IMHO.
News
General
Opinion
True Crime
Politics
Sport
Explainer
Entertainment
Celebrity
Reality TV
Movies
TV
Books
Rogue
Royal
Lifestyle
Beauty
Fashion
Weddings
Home
Wellness
Health
Fitness
Travel
Food
Parents
Before The Bump
Pregnancy
Baby
Kids
Teens
School
Parent Opinion
Work & Money
Money
Finance
Career
Lady Startup
Relationships
Sex
Dating
Separation
Friendship
Family
Real Life
Couples