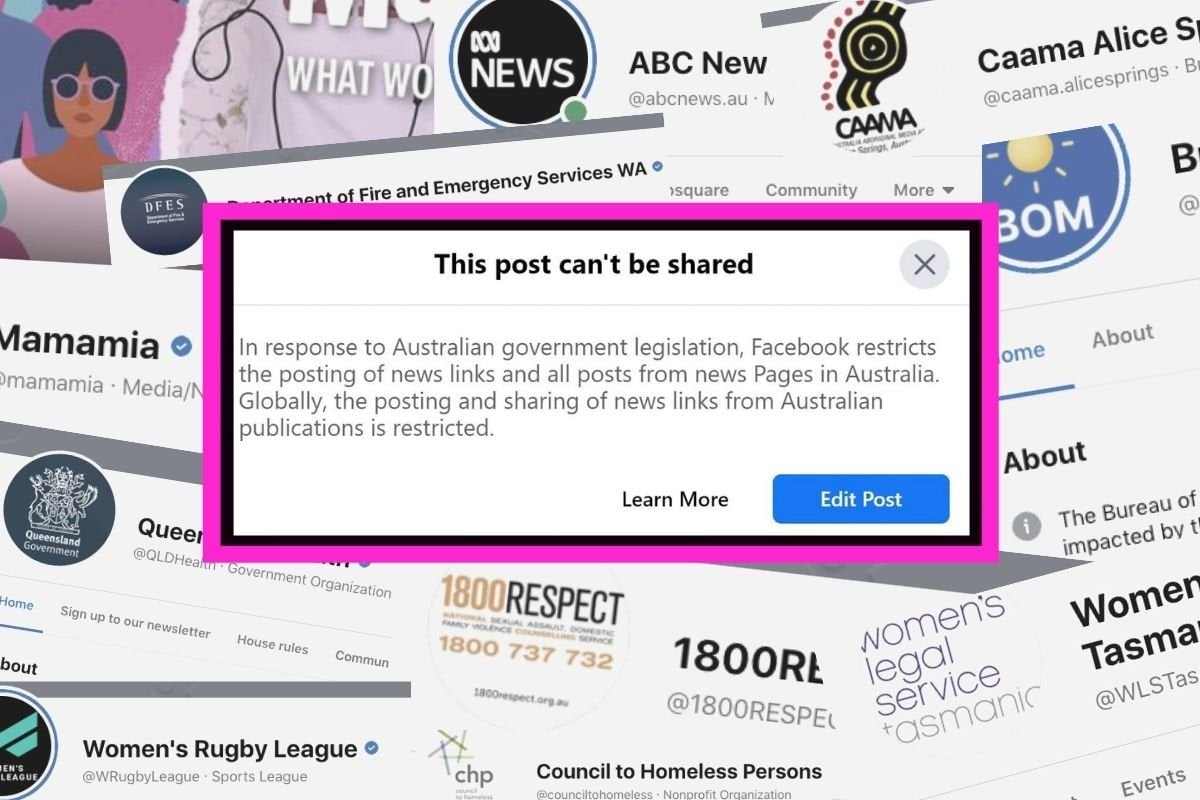 Facebook has followed through on its threat to ban Australians sharing news on its platform in response to a proposed media bargaining code.

This means media companies like Mamamia will no longer appear in your feed, and when you search for us on Facebook, our page will appear blank.

So Facebook considers @qldhealthnews to be news as well? During a pandemic? C'mon Mark Zuckerberg pic.twitter.com/8yqUNuI9p4

Facebook has removed the @BOM_au page amidst the shutdown of Australian news pages, and on a day with flooding rain in QLD and catastrophic fire danger in WA. Warnings need to get to as wide an audience as possible as a matter of safety. Shocking.

It’s not just big news orgs bearing the brunt of the News ban by @Facebook. Smaller Indigenous and community media orgs are too. Vital for getting info out about COVID, telecommunications outages and emergencies to communities. pic.twitter.com/3v5FfFkCn9

The decision of @Facebook today will harm every charity in Australia, we all rely on their platform to get critical news out about the causes we are fighting for & to engage supporters & donors. To not exempt NFP is a reminder that we are the product and they are not our friend.

So Facebook, we’re a charity which tries to help people learn to protect themselves from becoming victims of crime & connect with their community by provide tips & advice. Your #facebooknewsban has sent our page dark too. Why? #FacebookAustralia #FacebookWeNeedToTalk

1800RESPECT has been blocked from Facebook this morning – denying victim survivors of FV and sexual assault access to critical information. Irresponsible by FB. Cth must act quickly to rectify. It's more than just advertising revenue. There are, quite literally, lives at stake.

Compiling a thread of non-news organisations caught in the Facebook ban, here.

Many of these pages have since been restored, however maller groups like the Danila Dilba Health Service, an Aboriginal organisation, were still blocked on Thursday evening.

The social media giant claims it has been left with no choice, with the decision made in response to the federal government's proposed legislation to create a news media bargaining code.

In April 2020, the Australian government asked the ACCC to develop a mandatory code of conduct to address the power imbalances between Australian news media organisations and digital platforms like Google and Facebook. 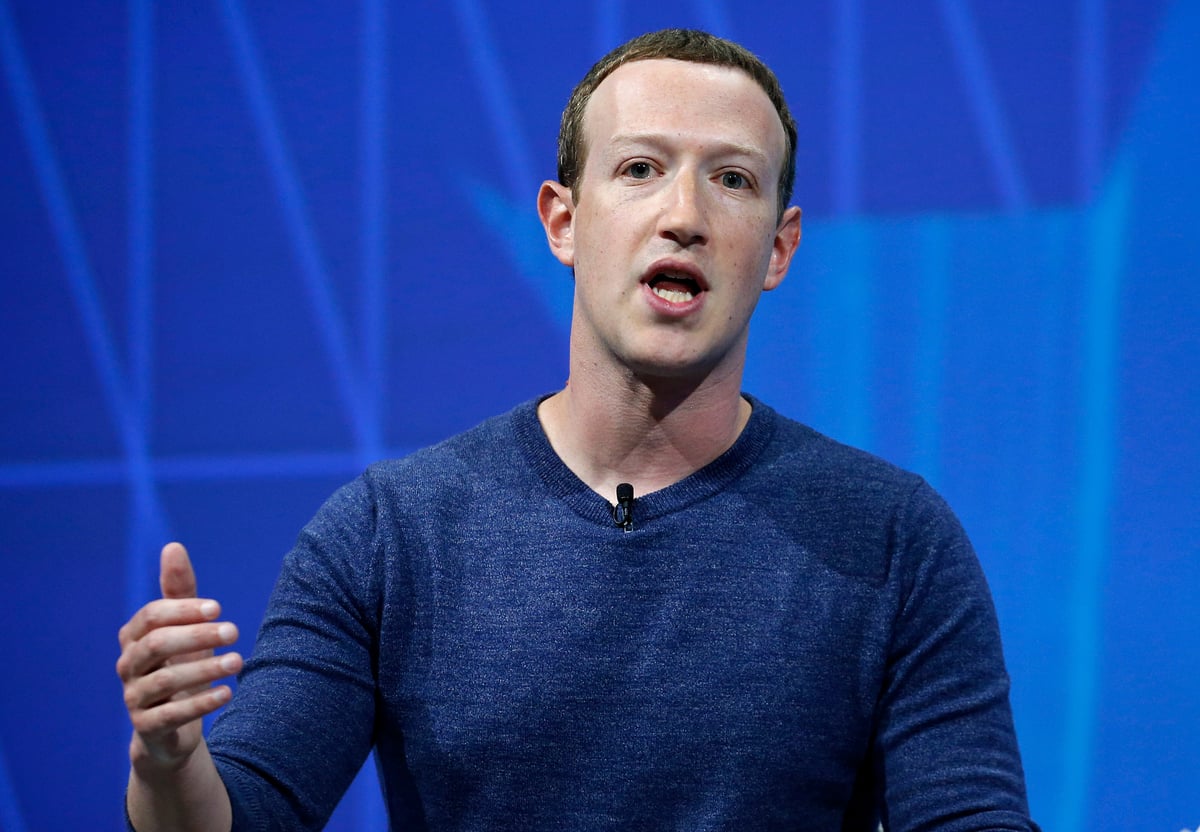 Facebook has been threatening to do this for months now. Image: Getty.

"The proposed law fundamentally misunderstands the relationship between our platform and publishers who use it to share news content," said Facebook in a statement on Thursday.

"It has left us facing a stark choice: attempt to comply with a law that ignores the realities of this relationship or stop allowing news content on our services in Australia.

"With a heavy heart, we are choosing the latter."

Facebook executive Campbell Brown added, "Publishers choose to share their stories on Facebook. From finding new readers to getting new subscribers and driving revenue, news organisations wouldn't use Facebook if it didn't help their bottom lines."

The move is not entirely unexpected.

Facebook first made the threat to ban news for Australians in August accusing the proposed Australian regulation of "misunderstanding the dynamics of the internet," claiming that the move would "do damage to the very news organisations the government is trying to protect."

"Assuming this draft code becomes law, we will reluctantly stop allowing publishers and people in Australia," it warned at the time.

As Facebook restricts the sharing of news, Google is striking deals in Australia to pay for journalism.

News Corp has become the latest publisher to sign a lucrative agreement with Google.

The internet giant has already struck deals with Seven West Media and Nine Entertainment, and is in talks with public broadcasters ABC and SBS, as well as Guardian Australia.

So is the government likely to back down?

The media bargaining code is before the Senate after clearing the House of Representatives overnight.

The legislation, which has bipartisan support, will give the treasurer power to choose which companies are subject to it.

Under the code, a panel - decided by the negotiating parties or the media watchdog - would hear offers and make a decision on payment for news content.

On Thursday, Communications Minister Paul Fletcher said the government would not back down to Facebook after it restricted Australian access to news.

"Facebook needs to think very carefully about what this means for its reputation and standing," Mr Fletcher said.

Treasurer Josh Frydenberg, who has proudly trumpeted the bargaining code throughout the week, has spoken to Facebook founder Mark Zuckerberg following the company's decision.

"He raised a few remaining issues with the government's news media bargaining code and we agreed to continue our conversation to try to find a pathway forward," Mr Frydenberg said.

This morning, I had a constructive discussion with Mark Zuckerberg from #Facebook.

He raised a few remaining issues with the Government’s news media bargaining code and we agreed to continue our conversation to try to find a pathway forward.

The prime minister says he won't be intimidated.

"Facebook's actions to unfriend Australia today, cutting off essential information services on health and emergency services, were as arrogant as they were disappointing," Mr Morrison said in a statement on his Facebook page.

"These actions will only confirm the concerns that an increasing number of countries are expressing about the behaviour of big tech companies, who think they are bigger than governments and that the rules should not apply to them. They may be changing the world, but that doesn't mean they run it."

Labor is demanding the Morrison government resolve the dispute, despite voting overnight to support the bargaining code.

"During a global pandemic, Australians can't access state health departments on Facebook. On a day of flood and fire warnings in Queensland and WA, Australians can’t access the Bureau of Meteorology on Facebook. The Morrison Government needs to fix this today," wrote Opposition Leader Anthony Albanese.

The Morrison Government needs to fix this today.

"The question is one for the government to answer instead of patting yourselves on the back. Tell Australians what's going on with Facebook. It's something that 18 million or so Australians are affected by," he added.

Reply
Upvote
1 upvotes
People get their news from Facebook? ABC.com.au
fightofyourlife 8 days ago

Reply
Upvote
1 upvotes
@mamamia-user-236023277 Sure, lots of people do. I follow the ABC News, SBS News and the Guardian pages on FB and until yesterday, got the vast majority of my news through those sources. It was convenient, because I already check FB in the mornings, so I'd get the headlines at the same time.
laura__palmer 8 days ago

Reply
Upvote
4 upvotes
@mamamia-user-236023277 yes,  I follow news organisations like ABC, the Guardian, SBS and my local newspapers. I then click on the articles that interest me, which takes me to the pages of these news outlets. It's not "getting news from Facebook", Facebook is just the platform that these outlets share on. It's like saying "you get your news from the television?"
michael 8 days ago

Reply
Upvote
9 upvotes
Making FB pay just for linking to news sites is absurd. Usually the person getting the advertising (the press) pays not the other way around.
feast 8 days ago

Reply
Upvote
1 upvotes
@michael Agreed, that's what I find weird about the whole situation. Would you expect a newspaper to pay Harvey Norman to put HN's ads in the paper?
laura__palmer 8 days ago