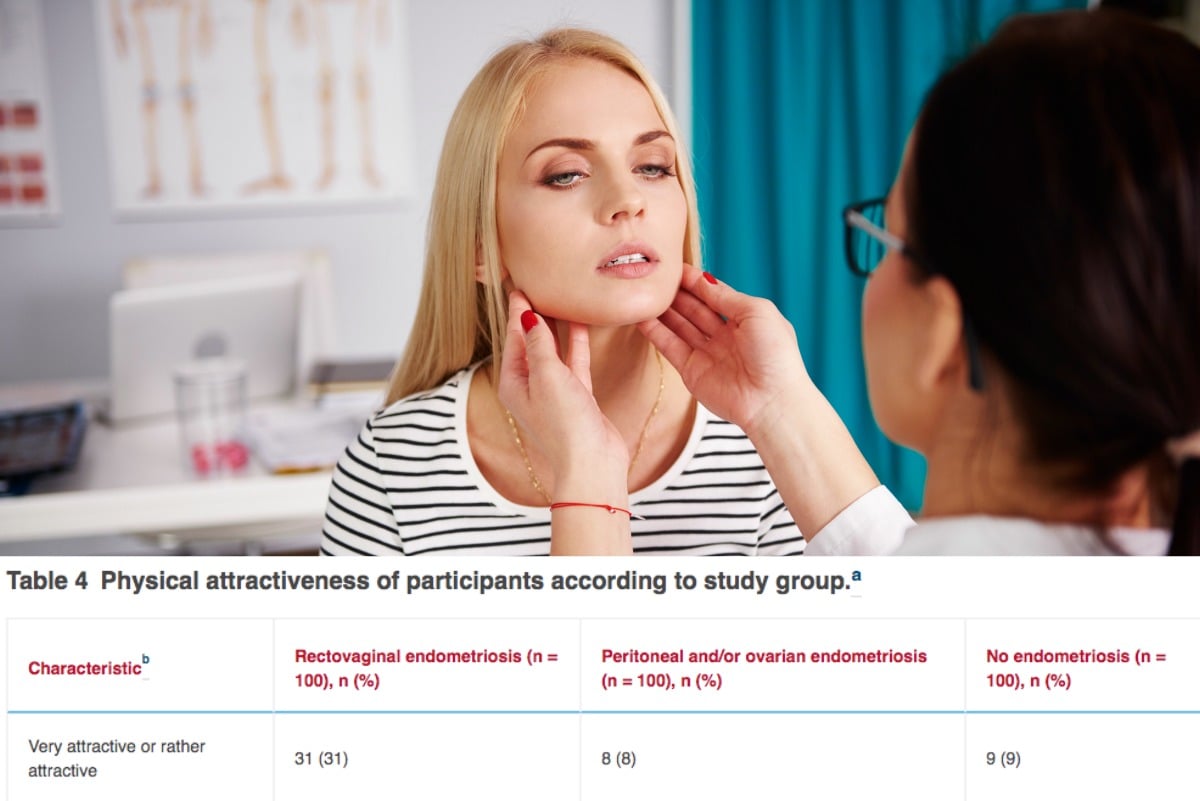 One in nine Australian women are diagnosed with endometriosis by the age of 44.

In very simple terms, it's a disorder that means the tissue that would normally line the inside of your uterus, grows outside. It might be in your ovaries, bowel, or fallopian tubes instead.

It can be excruciatingly painful and despite being one of the most prevalent women's health issues, the disorder is underdiagnosed and understudied. Far more work needs to be done in the space of endometriosis when it comes to diagnosis and treatment.

But - for reasons no one can quite understand - a medical journal decided to invest resources into determining whether endometriosis makes you more physically attractive.

Let us explain. In 2013 (yep, that recently), an obstetrician, gynecologist and the former president of the World Endometriosis Society, led a study that's sole purpose was to "evaluate physical attractiveness in women with and without endometriosis."

300 all white women had their waist-to-hip ratio, their breast-to-underbreast ratio and BMIs measured, and were quizzed about their sexual histories.

The researchers concluded that the women with rectovaginal endometriosis (a severe form of the disease), had a "leaner silhouette and larger breasts," and had been sexually active earlier in life.

Apparently this made them more attractive than those with ovarian endometriosis, and those without the disease altogether.

It was published by the University of Milan School of Medicine in 2013. Just last week, after seven years, the study was finally redacted.

Parts of the research, however, still exist online.

You'd think that would trigger some alarm bells, but no, the 'method' incredulously went on to outline that inclusion criteria for the experiment includes "Caucasian origin" and excludes those with "visible tattoos or piercings, coloured contact lenses and completely dyed hair."

LISTEN: Keira Rumble on running a business and living with endometriosis. Post continues after podcast.

It explained that the study was performed with practices in place to "limit potential unintentional seductive behaviours that might sway the raters' judgement" and four physicians (two females and two males) are all asked to give a judgement and rate the patient's 'attractiveness' on a 5-point rating scale.

The study concluded: "The proportion of women with rectovaginal endometriosis deemed rather attractive or very attractive was much more than double that observed in the other two study groups," pointing out that "attractive subjects have more chances of being selected by potential mates."

The six medical doctors who contributed to the study issued an "article withdrawal request" that read: "We conducted the study in good faith and according to correct methodology. We believe that our findings have been partly misinterpreted, but at the same time realise our article may have caused some distress to some people. Women's respect is a priority for us, and we are extremely sorry for the discontent the publication originated." 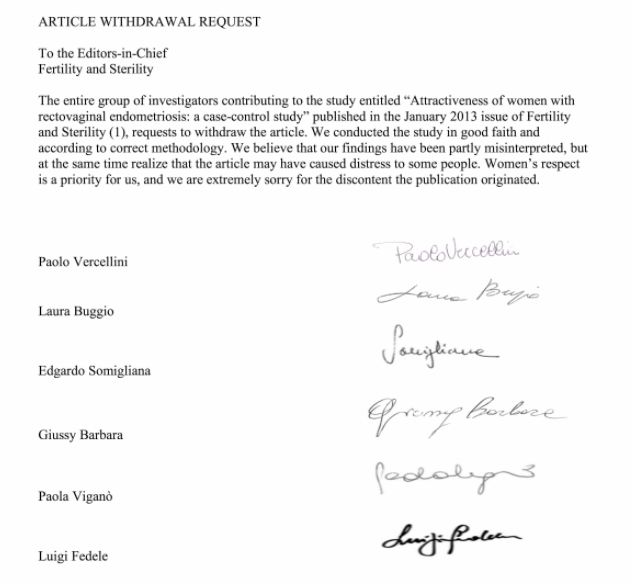 But we're questioning why the study was ever commissioned in the first place.

Why money, resources and time was spent trying to find a link between supposed 'attractiveness' and endometriosis - when we're still desperately in need of a better understanding of the disease itself, a better process for identifying and diagnosing the painful condition, and the development of better diagnostic and treatment options.

This isn't research from 50 years ago. Most of us had iPhones in 2013, and here in Australia we had a female Prime Minister.

And yet according to a study - led by a man - how a woman looks is more important than how a woman feels. ﻿

"The pain was excruciating." Angie Kent on her experience of living with endometriosis.

"It's like someone's stabbing me in the abdomen." Jess has been in pain since she was 11.

The most googled women's health question of 2018.

Reply
Upvote
3 upvotes
'Why money, resources and time was spent trying to find a link between supposed 'attractiveness' and endometriosis' - To see if the genes that interact with hormones to produce a more feminine appearance (estrogen mainly) may also predispose women to severe endometriosis.
There had been previous studies of other characteristics, including body size, BMI, hair colour, eye colour, fat tissue distribution.... This was the next step.
Why are we pretending that people withdrawing their research because some people got offended is a good thing? No one seems to be saying the research is wrong, only that they don't like it.

Reply
Upvote
2 upvotes
@elishatraill Did you look at how they rated attractiveness? There was definitely the subjective side, but they also looked at the physiological features.
The article writers themselves noted that this was a small study and further research was needed.

Reply
Upvote
@snorks How does this research help?
And, "attractiveness" is pretty much always subjective.

Reply
Upvote
3 upvotes
@laura__palmer As i stated above 'To see if the genes that interact with hormones to produce a more feminine appearance (estrogen mainly) may also predispose women to severe endometriosis.' If they know what genes to look at they can try and find ways to cure it. This research may not have helped, but there's an awful lot of research out there that is based on a hypothesis that doesn't work out in the end.
'"attractiveness" is pretty much always subjective' - Which would be why they included the physical aspects of the study. I might have used the term 'good looking' rather than 'attractive', because there are basic fundamentals on being good looking such as facial symmetry, full lips, high forehead, broad face, small chin, etc. That changes by country / culture, but only relatively minor changes.

Reply
Upvote
1 upvotes
This article should add, for the sake of journalistic completeness, that the study in question has been retracted. Your claim that it has "never been removed" is out of date. This study has been controversial since the time of its original publication - this is not a recent issue that has just come to light within the industry.
https://www.theguardian.com/society/2020/aug/05/disgusting-study-rating-attractiveness-of-women-with-endometriosis-retracted-by-medical-journal

Hi there, thank you for alerting us. We have changed this in the article.