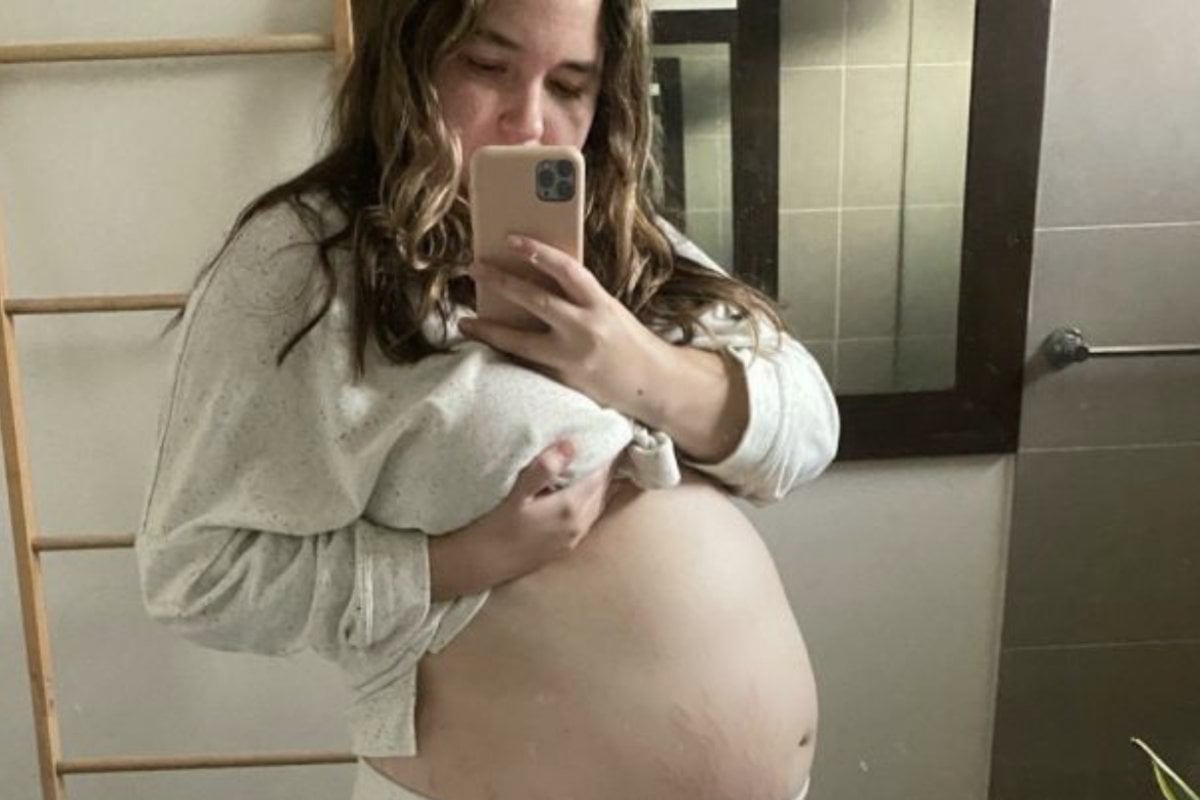 Ellen Cameron’s experience with endometriosis started like so many others. Her symptoms began when she first got her period at 12-years-old. She experienced incredible pain, intense cramps and severely heavy bleeding.

“I would even feel like I was going to pass out at school from the pain of my period and would go home sick a lot,” Ellen told Mamamia.

“My symptoms worsened when I became sexually active in my late teens and I found sex to be excruciatingly painful. I would feel a burning sensation during intercourse and a deeper pain inside my uterus.”

But it wasn’t just during her period or intercourse that Ellen suffered pain. She also experienced a number of symptoms outside her cycle, like bloating, known as ‘endo belly’, as well as cramping pains.

Ellen was 16 when it was first suggested to her that she might have endometriosis. Her GP asked her to undertake an internal ultrasound which according to Ellen, came back ‘fairly normal’ but it did indicate her ovaries were ‘immobile’.

“I now know you can’t diagnose endometriosis from an ultrasound, but if things are immobile it can mean there’s a possibility that there are adhesions on your ovaries or uterus that are caused by endometriosis,” she said.

“I was incorrectly told that nothing could be done if I did have endometriosis as my doctor said surgery would just make my pain worse. So I was put on a number of different hormonal contraceptives such as the pill, the rod and the contraceptive injections to help the pain.”

While some of these methods helped slightly, it wasn’t until Ellen was 19 that she saw a different GP who gave her a referral for her first surgery. The laparoscopy would diagnose her endometriosis – the only way it could be known for certain.

“I personally had a really bad experience with my first laparoscopy, I didn’t receive any follow up from the hospital and my laparoscopy report was actually lost for four years. So I never knew if they found any endometriosis,” Ellen said.

“It wasn’t until my GP managed to track my report down earlier this year that it was finally confirmed that endometriosis was found during my first laparoscopy. However, there was no details on the report about what stage of endometriosis, what method was used to remove what they found or if they even removed what they found.”

As a result, Ellen was routinely misdiagnosed and underwent countless ultrasounds and tests, while her pain was dismissed as being caused by sexual trauma. She’s grateful to have a wonderful GP who kept digging and referred her to a specialist, yet now at 25-years-old Ellen said she still wakes up every day in pain.

“I get cramping pains in my pelvis all day every day, as well as intense stabbing pains where my ovaries are. I also experience a lot of digestive issues and bloating – I haven’t been able to wear pants comfortably in months,” Ellen said.

“These symptoms take a toll on your body. So I am also incredibly fatigued and have experienced depression and anxiety as a result. I’m also on a regime of daily high-level painkillers that also contribute to feeling tired and impact my daily functioning.”

Food can also be a trigger for Ellen’s endometriosis so she tries to avoid dairy, processed meat and food high in saturated fat. Stress is another big trigger, with heat packs, hot showers or baths and light exercise like walking being helpful but difficult to maintain.

It was in February of this year, just prior to isolation coming into place that Ellen’s flare ups started to get worse. They are the most intense she’s ever experienced causing such severe bloating, she says her stomach looks like she's full-term pregnant.

“I’ve been to the emergency room twice in the last four months for the level of pain. Both times I felt like I was being stabbed with a hot poker and was doubled over on the ground crying in pain,” she said.

“Both times I was checked for appendicitis and given ultrasounds and CT scans. Both times the results came back with a high white cell count and clear of appendicitis – but did find a 3.6mm cyst on my right ovary. Both times I was discharged with no follow up care or referrals made and told to wait to see if the pain went away on its own. It hasn’t.”

At the same time, Ellen had just started a new job as a Social Worker after graduating from RMIT University and was two weeks into her role when self-isolation started. Suddenly she found herself working from home trying to support others while dealing with her own excruciating pain at the same time.

“I just spiralled. I was stuck in my house in high levels of pain, trying to navigate a job I barely knew how to do because I was so new. I was constantly anxious. I started crying and having panic attacks during the day. I found sitting for our usual care team meetings via Zoom painful,” Ellen said.

Listen to Mia Freedman talk to Sylvia Freedman on No Filter. Post continues below.

“I started taking sick time off and this was flagged with HR. I explained what was going on and both my employer and I tried to work through it, but it became clear that I just wasn’t capable of working. My employer was understanding and very kind. To be honest, leaving felt like a huge relief.”

Ellen found being brought to the attention of HR defeating and felt like she was letting her employer down, factors that further contributed to her mental health and pain spiralling. She has been on JobSeeker since leaving her role in March and has regular telehealth appointments with a psychologist.

“Dylan has gone above and beyond in supporting me and has often had to take time off work to take care of me. While he is incredibly supportive, we have no sex life,” Ellen said.

“I find sex to be really physically painful and that’s really hard. It isn’t fair on either of us. I want us to have a whole, full life including a healthy sex life but with the way my endo is at the moment, it’s just not possible.”

The only way to alleviate Ellen’s pain is with excision surgery which involves laparoscopically removing any adhesions from her body as well as the large cyst on her right ovary. She was scheduled to have this performed on July 21 with a private surgeon who has a public wait list at a rural hospital.

This meant shorter wait times and no out of pocket expenses. But living in Ascot Vale, Melbourne, Ellen’s postcode was put back into Stage 3 restrictions from 12:59pm on July 1.

“As you can imagine, I had already been waiting for this surgery since March. So October with a look for it to be cancelled if lockdown continued wasn’t an option and my surgeon agreed.”

Given the situation in Victoria, Ellen believes this will be the new normal for many months which means there are no guarantees of an October surgery. Even if it could go ahead, it’s still an unbearable wait.

“My surgeon agreed that my surgery needed to happen last week. I have too much daily pain and the level of painkillers I take every day is not sustainable until October, let alone possibly beyond that,” Ellen said.

No filter. No edits. Today was really fucking hard, for no particular reason. This is living with chronic pain.

As Ellen is still in the waiting period for private health insurance, her only other option is to go to the closest public hospital. Ellen’s GP has referred her to the gynaecologist’s clinic here twice and she has been on the waiting list for over 18 months just for an initial consultation, let alone surgery.

“I have no public options, unless I wait until lockdown is over. When I found out I cried, I screamed, I had panic attacks, I felt suicidal. I couldn’t see any way out of the situation and I thought if the surgery was never going to happen, I couldn’t keep on living,” Ellen said.

“My surgeon called different hospitals advocating for me but no one was willing to allow the surgery to go ahead. It wasn’t until my surgeon presented me with the option of paying to go private that I felt hope again.”

With all of her public options exhausted and a private hospital being the only current option, Ellen has now booked in to have her surgery on June 30 and is crowdfunding through a GoFundMe campaign to cover her out of pocket expenses.

“This surgery means everything to me. Right now, I can’t work, I can’t function, I can’t get out of bed most days. Being in this level of pain I have no quality of life at the moment. This surgery changes all of that,” Ellen said.

While Ellen believes most people have now heard of endometriosis, she still finds there is a misconception about its severity, with many passing it off as just having a painful period. She thinks it’s important to understand just how debilitating it can really be.

“You can’t judge how sick someone is by how sick they look. Some days I may look really ‘normal’ but inside I’m in so much pain and I’m just pushing through. I wish there was more understanding of how much pain I’m in every single day,” she said.

“Endometriosis can also impact anyone assigned female at birth, regardless of whether they are a cisgender woman, non-binary person or a transgender man. It’s not just a ‘female issue’. It isn’t a choice to have endometriosis, all we want is a solution.”

You can donate to Ellen’s GoFundMe page here and follow her journey with endometriosis on her Instagram  Chronically Fully Sick.