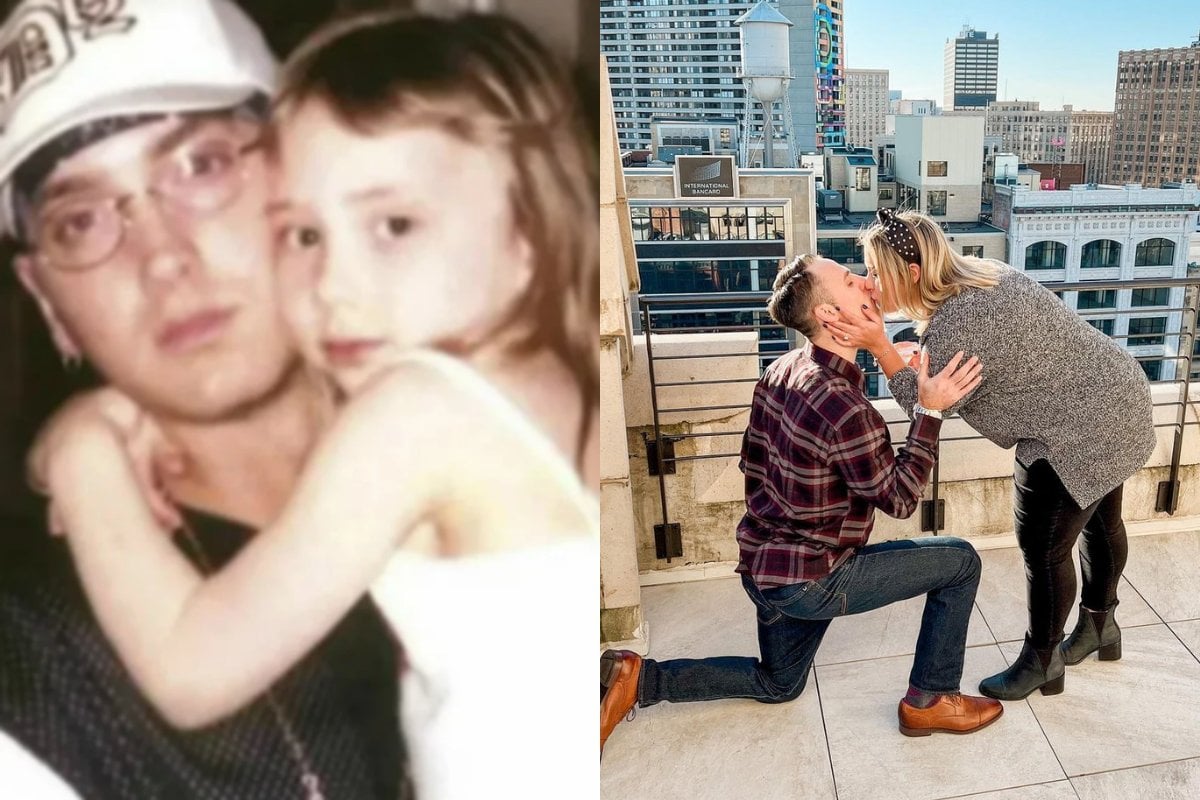 So here’s a fact you might not know: rapper and singer Marshall Mathers (Eminem) doesn’t just have one daughter. He has three.

We’ve heard a lot about eldest daughter Hailie Scott’s upbringing in songs like 'Mockingbird' and 'Hailie’s Song'. We’re also relatively familiar with Mathers' troubled relationship with his ex-wife Kimberly Anne Scott. But what fans have seldom heard about is the two adopted daughters that changed Eminem’s life.

Watch a clip from Eminem’s music video for 'Lose Yourself'. Post continues below.

Hailie has the most public persona of Eminem’s daughters.

She’s also Eminem’s only biological daughter and was born on Christmas Day in 1995. She's 25 now.

"My mother and father because they have pushed me to be the person I am and have given me all the support to achieve what I have," she said in an end of school newsletter, reported by E! News.

Hailie also graduated from Michigan State University in 2018 with a degree in psychology. It’s also the place she met her long-term boyfriend, Evan McClintock.

Last year, Eminem told Mike Tyson on the podcast, Hotboxin’ that Hailie has "made me proud for sure".

"No babies, she has a boyfriend, but she’s doing good," he said.

Since graduating college, it seems the millennial has turned her aspirations to being an Instagram influencer, as she regularly shares her outfits with her 2.3 million followers.

They split two years later, in 2001. The pair briefly reconciled in 2006, before separating permanently.

Born under the name Amanda in 1993 to Kimberly’s twin sister Dawn Scott – who died of drug abuse in 2016 – Alaina Marie was legally adopted by Eminem in the 2000s, although it’s unclear precisely when this happened. Her name was legally changed during the adoption process.

Alaina was occasionally referenced in Eminem’s work; in 'Mockingbird' the rapper referred to Alaina and Hailie as sisters. She is often called 'Lainey' in lyrics.

These days, Alaina is a mental health and body positivity advocate, regularly sharing photos on her Instagram.

On December 13, the 28-year-old got engaged to her fiance Matt Moeller after seven years together.

Stevie was born in 2002 to Kim and her tattoo artist ex-partner, Eric Hartter, but Eminem has full custody of the teenager due to their biological father's drug and legal issues.

Not much is known about them, other than they're 19 and occasionally appear in Alaina's Instagram photos. Eminem also briefly mentions them in his songs 'Going Through Changes' and 'When I’m Gone'.

Earlier this year, Stevie — who is non-binary and prefers they, he and she pronouns — posted a TikTok video where they seemingly claimed that Eminem kept their adoption a secret until after their biological father's death.

In the video, which has since been deleted, Stevie seemed to recount a conversation they had with the rapper about being adopted.

"He's not your real dad," they wrote in the video, as if it was said by an unnamed person. "You're adopted."

"You're my real dad right? Am I adopted [sic]?" they seemingly asked.

"I am your real dad," they were told by presumably Eminem.

Stevie then claimed they were sent an article of their biological father's death and showed it to their grandmother.

"I'm sorry they wouldn't tell you about him [sic]," Stevie recounted their grandmother saying.

The 19-year-old ended the video by lip syncing the line, "That must be so confusing for a little girl" from the song 'Remember Me' by Adventure Time.

This post was originally published on January 26, 2018, and has since been updated.

Uh, all three girls feature in some of his most popular songs. His family life is well documented; these are not obscure facts only his Stans would know.
D
David S 2 years ago

Hailie also graduated from Michigan State University in 2018 with a degree in psychology...

Since her graduation, it looks like the millennial has turned her aspirations to becoming an Instagram influencer and regularly shares her outfits with her 1.9 million followers

This makes me sad: as a reflection of what our society values and validates, and for the choices she's making. Hope it works out for her.