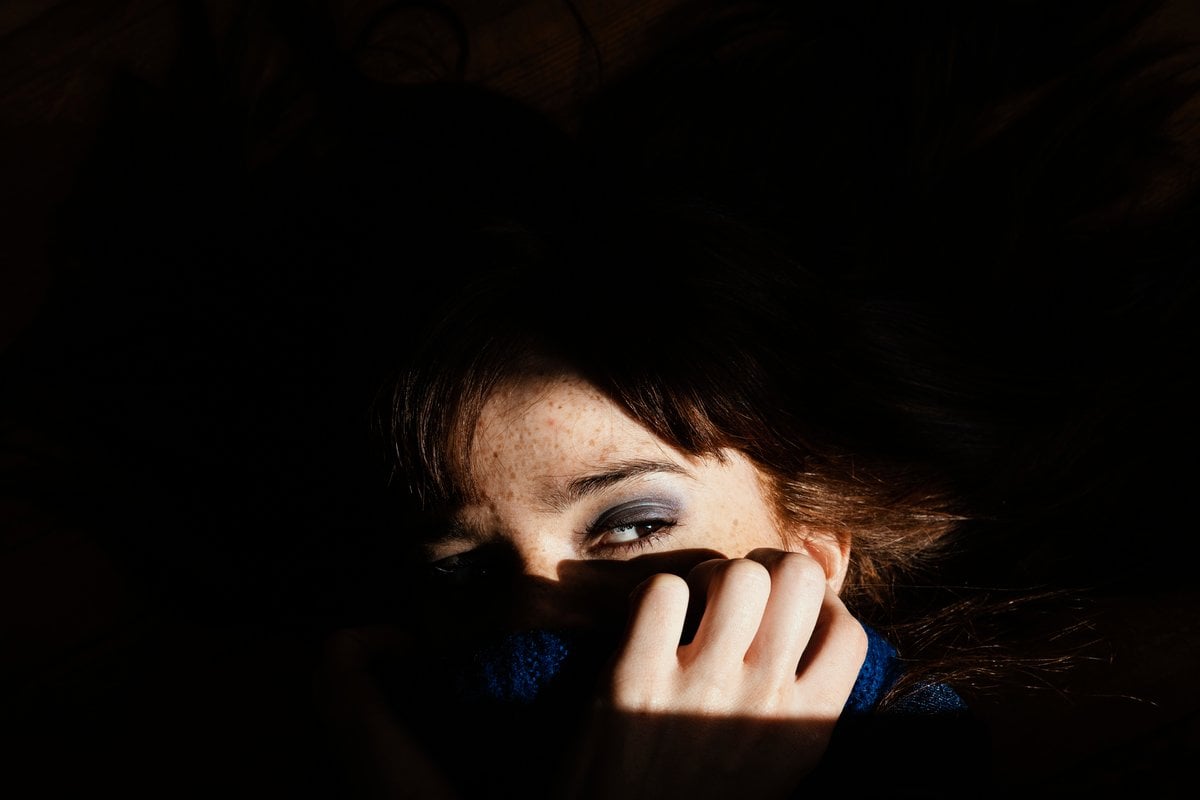 You may have seen a recent article about Olympic swimmer Emily Seebohm’s public announcement on Instagram regarding her battle with an eating disorder.

It’s an incredibly difficult and personal story to share. Emily is one of the four per cent of Australians affected by an eating disorder. While Emily received the compassion and empathy that anyone should when sharing something so deeply personal, there are still many misconceptions and stigmas surrounding the who, how, and why of someone who is impacted by eating disorders.

Sadly, the yearly mortality rate for people with eating disorders is almost double that of the general population, the highest of any mental health condition alongside substance use disorders, as reported by The Conversation.

Aussie singer Kasey Chambers shares her experience of having an eating disorder in the video below. Post continues after video.

While eating disorders span across many different forms such as binge eating disorder, bulimia nervosa, orthorexia, avoidant/restrictive food intake disorder (to name only a few), the yearly mortality rate for those affected by anorexia nervosa is almost six times than that of the general population, according to Eating Disorders Victoria.

Triggers, for me (in the context of my eating disorder) mean a spiral into negative thoughts and emotions that are ladened with guilt, anger, and shame. The worst of these is an irrational thought that wants to demonstrate to these people exactly what an eating disorder is. A knee-jerk reaction that can easily slide into a relapse.

Over the years, I’ve heard a range of limiting and persistent myths. Such as, a need to conform to beauty standards in order to be liked or loved. That it’s a weakness of the individual. That people with eating disorders are vain and shallow. That it’s a dislike of overweight people. Or it’s seen as attention seeking behaviour. These are wildly wrong, and quite frankly dangerous as they disguise the deeper issues related to the individual, mental health, or trauma.

Eating disorders are extremely complex, debilitating, and sadly yes the most fatal of all mental health conditions. So how accurate are these assumptions? I wanted to dispel some of these myths from my own lived experience perspective and hopefully bring about an understanding so everyone (recovered, relapsed, or struggling) can be met with compassion and empathy rather than stigma and shame.

Beauty standards and the desire to achieve thin-ness are more often than not the default go-to explanation when discussing eating disorders. Or that it ‘only’ affects teen girls who want to see themselves on a runway, or within the pages of a glossy magazines. These assumptions are dismissive, inaccurate and honestly rather offensive.

Eating disorders affect all genders and identities, and are not limited to teenagers. Also, there is a big difference between crash dieting (also unhealthy) in order to fit into a favourite pair of jeans, and an eating disorder. While yes, images of thin people are often used as “thin-spiration” by someone while they are deeply unwell, it’s not ultimately the cause. If anything, the desire to not be seen is more pervasive amongst suffers.

For myself (and many others), my eating disorder was entangled in trauma. That my mind could overcome what my body could not. Or that my willpower could overcome the negative self-talk and I could completely transcend the toxic environment I was living in. Restricting made me feel strong and in control. Which is a bizarre juxtaposition. The more I starved, the stronger I felt, and in turn the more debilitating the disorder grew. With ever increasing fears my thoughts and reality began to distort and spiral out of control.

None of these thoughts involved a desire to be seen on a runway, or involved the assumed desire of conforming to beauty standards. There was no ultimate goal weight. Unlike a crash diet there was no happiness on the other side of the eating disorder rainbow. Just tighter control, stronger willpower, and a declining sense of self-worth. The longer this goes on the more distorted your thoughts become.

There is a sense of accomplishment watching the scales go down and mind over hunger go up. A sense of feeling disciplined, when in all honesty your mind is completely out of control. It’s not as simple as “I just need to fit into those jeans, or that dress” and while at times those things did feel good, unlike dieting it doesn’t stop there. What was confusing to my starved brain was the external messages that I was doing this to be thin and conform, and to some extent these did invade my thoughts at the time around why. It was far easier to blame beauty standards than confront what was really the root case.

Then there are the body dysmorphic thoughts. How I saw myself and how others saw me were/are two very different things. I saw a monster that was oddly shaped. Almost unhuman in a sense. The thing is no matter what size I’ve been (and I’ve been a lot of sizes) this is how I see myself. The odd aspect is that I could see reality in photos but not the mirror, whereas others with an eating disorder experience the opposite or just can’t see reality at all. Highlighting how we don’t all experience eating disorders the same way. They’re complex in nature and vary from person to person. Which again brings me back to why society’s deeply held persistent myths are not just wrong but also limiting.

Now that my body and mind are nourished this view is less prevalent, but it has its days. This is the aspect of my own experience that also makes it so hard to be able to take part in the body positivity movement. That while I wish I could, for now it’s extremely difficult.

The “happy at any size” mantra we are now hearing is a great and extremely positive movement, but for people with eating disorders and body dysmorphia it becomes a negative source of shame and failure. They are easy words to say, but very hard words for me to live by.

Eating disorders, and even more so, anorexia nervosa are deadly and serious mental health conditions. Saying “be happy at any size” to someone with an eating disorder is as dismissive as saying “you just need to smile more” to someone with depression. Yet unfortunately, this happens all the time. Everywhere, by family, by friends, and even by strangers. Shame on top of guilt, on top of failure. For me, “be happy at any size” is honestly a huge trigger that I wish I could overcome.

Eating disorders are also riddled with guilt. Recovery is riddled with it even more. Sticking to recovery, or sticking to the disorder is a double-edged sword. Being disciplined in recovery means being undisciplined in the disorder, and vice versa. You’re losing control either way. All the while your mind is starved. Logic and reason have well and truly flown the coop.

Entering treatment, I had an intense fear of having a bath. I was certain my body would soak up all the water, blowing me up like a balloon. While in one sense I knew this was not true or logical in relation to other people. My body on the other hand somehow defied this logic. I was an anomaly, and logic didn’t apply to me. In my mind, my body was monstrously unhuman.

On Mamamia’s candid, in-depth interview podcast No Filter, Mia Freedman speaks to a mother of a woman with an eating disorder. You can hear her perspective below, post continues after podcast.

Treatment also intensified the distorted fat thoughts. They are warped and unlike regular thoughts that usually sit around size and weight. These negative and toxic thoughts still (to a lesser extent now) affect me today. I've had the thought “I’m fat” when I’ve been smaller, when I’ve been bigger, and even now at a healthy weight. But I only have these thoughts about myself, they don’t apply to how I see other people. Just me.

This disordered logic also applied to food. Believing that if I ate a normal dinner I would somehow wake up tomorrow several kilograms heavier. Even though I know that same logic doesn’t apply to other people. Just me. This is not a phobia of what narrow beauty standards class as overweight, but a fear of my body defying logic.

I struggle to be happy at any size when this mental health disorder makes me unhappy at every size. It tells me, no matter my size, that I am out of control and completely unlovable.

While the how and why of eating disorders is different for everybody, recovery is possible. As for myself, I’m recovering, and just like sadness can be expressed without depression, being uncomfortable with my body doesn’t mean a relapse. What makes managing this difficult is when the myths surrounding eating disorders are unknowingly perpetuated. It’s distressing to have the darkest of my thoughts equated to vanity, attention seeking, weak will, or even lucky for conforming to beauty standards.

This is not something to feel sorry towards myself or others for. Rather it’s a condition that needs to be treated and managed just like any other. It’s not simply about beauty standards. There is no size privilege in eating disorders. If being ‘thin’ while suffering with an eating disorder is size privilege, then every single mouthful of food you eat for enjoyment (without tears and guilt or the need to run 5kms tomorrow to justify it) is also a privilege. I applaud Emily for her raw honesty, and I implore the wider community to broaden its understanding of eating disorders so that everyone can be met with the same empathy and compassion moving forward.

The featured image used is a stock image.