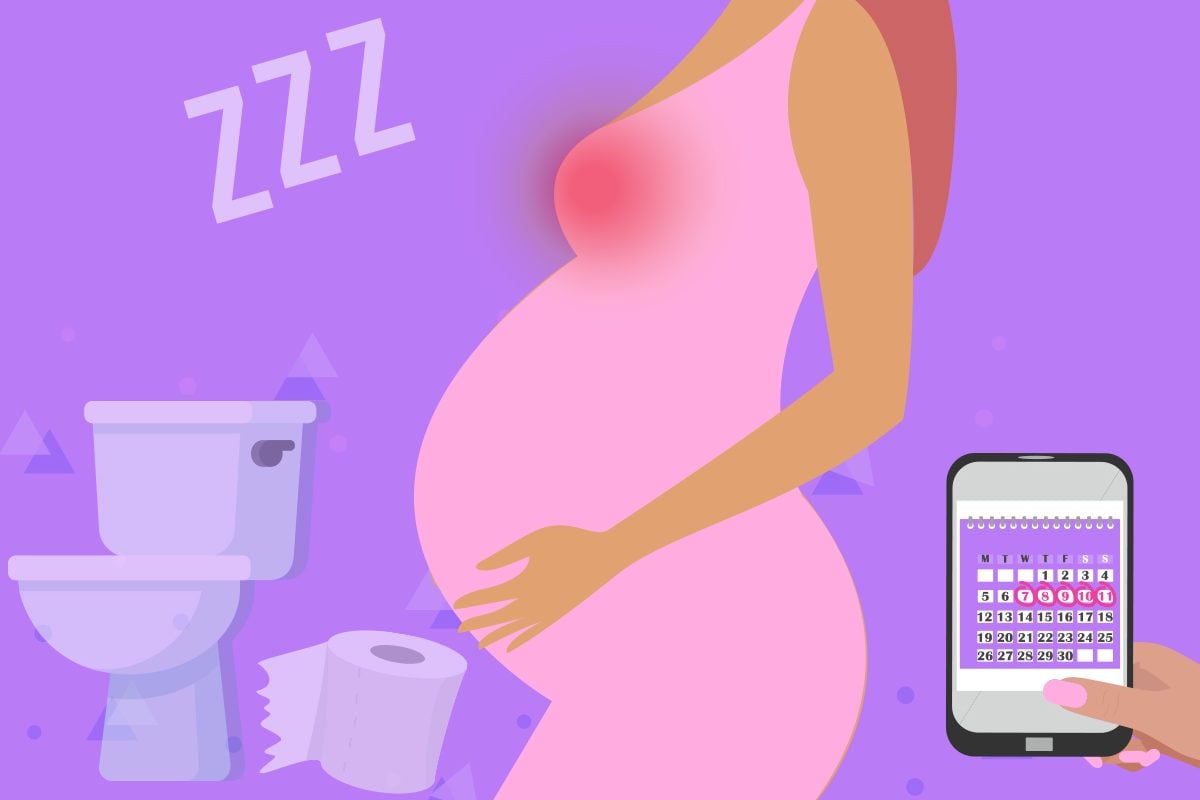 The tricky thing is, early signs and symptoms of pregnancy are also some of the many joys women experience every month with their menstrual cycle.

How do you know if what you’re feeling is an early pregnancy symptom, or related to something else entirely?

From whether pimples and discharge are early pregnancy symptoms, to how pregnancy hormones mess with your gut and leave you feeling exhausted, we asked an expert for all the possible early signs and symptoms of pregnancy.

Let’s go through them, including the early pregnancy signs before a missed period.

How early will a woman experience pregnancy signs and symptoms?

The thing to remember about pregnancy and how many weeks pregnant you are is:

With that in mind, Melbourne-based obstetrician Dr Joseph Sgroi told Mamamia most women experience early symptoms and signs of pregnancy in the fourth or fifth week, though some say they do earlier.

"Some women will say they'll experience those symptoms as soon as they conceive, but probably the likelihood of that is very low. Around 60 per cent of women will experience some sign or symptom that they're pregnant at around the five-week mark. For example, you miss your period, and then around a week later, you experience symptoms."

"90 per cent of women will have some symptom by their eighth week. They may not be all the same symptoms and, in actual fact, every pregnancy is different, but they will have some pregnancy-related symptoms by that stage."

Below are some of the most Googled early pregnancy questions:

Not having a period/missed period.

This one is the most common early sign of pregnancy.

That said, other factors like increased stress, high food intake, impact of exercise, starting a new medication or changes in medications, weight loss and anything that alters your hormones can affect your menstrual cycle.

"Progesterone, which is the major hormone secreted by the ovaries in the first 12 weeks of pregnancy, and then the placenta for the remainder of the pregnancy, causes the gut to slow down so the body can extract as many nutrients from the food as possible," Dr Sgroi said.

Similarly, women may experience nausea in the first trimester as the levels of progesterone and estrogen change.

"Women will experience a relaxation of the musculature and the ligaments around their body in pregnancy, which includes the relaxation of the muscle in between the stomach and the esophagus, and that causes heartburn, food aversions and food cravings which potentially also set off the nausea and vomiting."

Bloating can come with the hormonal impacts of pregnancy on your gut, but Dr Sgroi explained cramping (feeling twinges in the uterus) is a common early pregnancy symptom.

"Progesterone is the major hormone at play in the early stages of pregnancy, but there is the circulation of other hormones that help with the relaxation of muscles, so in those settings, some women get back pain and the like," Dr Sgroi said.

"Some women will get a sensation that their breasts are a bit sorer or larger before their missed period, too."

Pregnant women will pee more because of a higher blood volume, which means you've got a higher volume going through your kidneys.

That said, this on it's own isn't an early sign of pregnancy.

Dr Sgroi said, "If a woman is susceptible to hormonal changes during her menstrual cycle – mood swings and the like–- then of course those changes can occur during pregnancy."

General fatigue and tiredness is a common early symptom of pregnancy.

"I think of it in terms of protecting and nurturing this little thing growing inside you, and tiredness and fatigue plays a huge part now in modern society," Dr Sgroi said.

Some of the most Googled questions around early pregnancy symptoms are:

Discharge on its own isn't an early symptom of pregnancy (white discharge is more commonly associated with thrush, see your GP about that), but a clear discharge in conjunction with other pregnancy symptoms is possible.

Again, pimples on their own aren't a sign of pregnancy, but if you are pregnant, your increased levels of progesterone can cause your skin to produce more sebum (the skin's oil), which can lead to blocked pores and types of pimples.

As for spotting – spotting isn't an early sign of pregnancy, but if you are pregnant and have spotting, talk to your obstetrician.

Dr Sgroi added, "Spotting in pregnancy is not usual – 25 per cent of pregnancies will have an element of spotting early on and that might have nothing to do with the pregnancy and more to do with the cervix bleeding a little bit, but you'd want to tell you doctor if you have any bleeding."

"Spotting is something we'd be wanting to know about because that could mean a whole range of things not necessarily related to becoming pregnant. We'd be worried about miscarriage or an ectopic pregnancy (outside the uterus)."

Every woman is different, so every pregnancy will be different.

"A patient could have a huge amount of nausea in one pregnancy, and none in their second, and might be terrified she's not pregnant or has miscarried. Every woman is different, and every pregnancy is different. Some women talk about how in the first trimester, they have all these symptoms to tell them they're pregnant, and then by week 12, they all drop off.

"It can be really stressful. There are some women who've had recurrent miscarriages and need regular reassurance along the way. Support in the first trimester is key – if you're worried, [your obstetrician] can confirm your pregnancy at the drop of a hat with an ultrasound."

The key message is this: if you think you might be pregnant, take a pregnancy test but also go and see your GP for confirmation. If you are pregnant, know your early pregnancy symptoms might be different from the next woman's, so always communicate with your medical professionals.

This article should not be substituted for professional, personalised medical advice. Please always consult with your obstetrician, gynecologist or GP.

Are you thinking about having a baby in the next 6 months? We want to hear from you - take our short survey for your chance to win $50

This was a great article! I knew pregnant women often get constipated, but I never knew why, so I learned something today!

Many many early pregnancy signs are so similar to PMS symptoms there's nearly no point symptom-spotting. You'll drive yourself mad. Two I can think back to, tough, which are not often listed were: thrush! Hadn't had a bout in over 10 years. And carpal tunnel syndrome. Both were unusual for me. But I didn't suspect anything at the time.