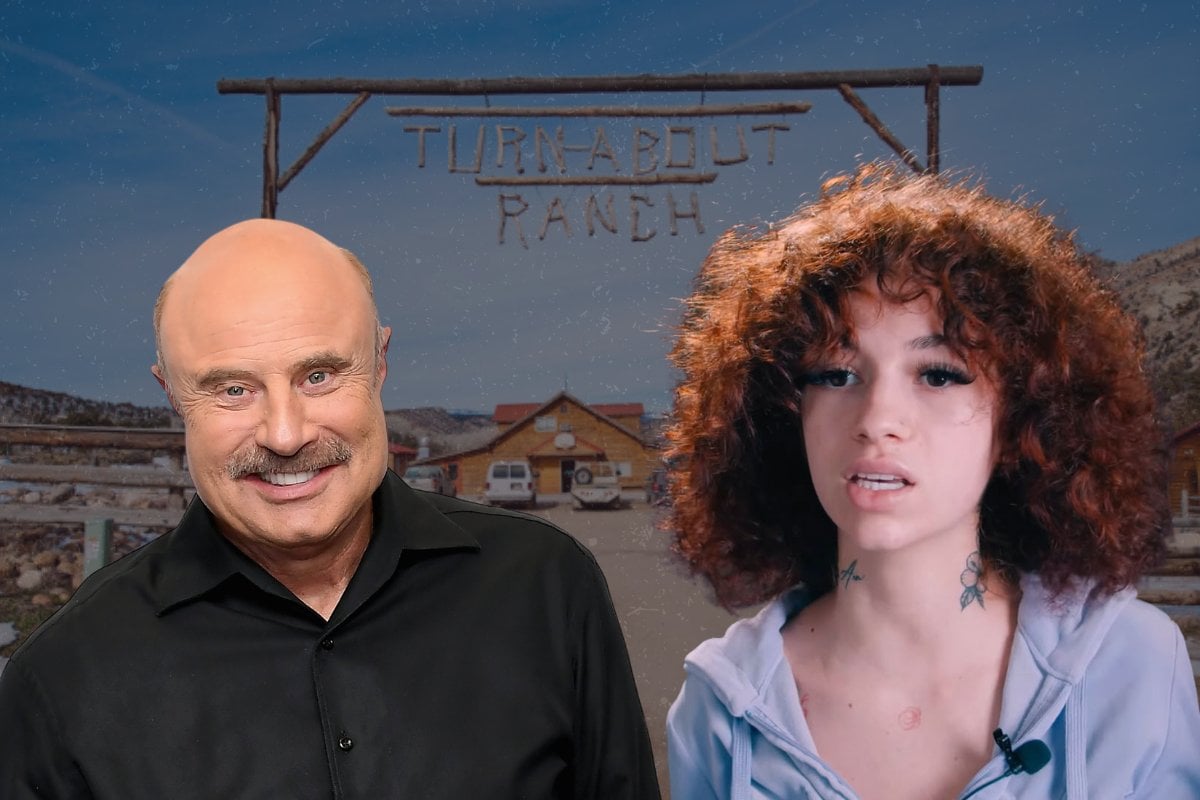 'Troubled teens' are a favourite topic on Dr Phil.

And anyone who's spent their days off work sick watching daytime television will know Dr Phil McGraw often sends these teens, who mostly happen to be young girls living with trauma, to various 'treatment programs'.

One of these is Turn-About Ranch in Escalante, Utah, a working cattle ranch facing multiple allegations of sexual, physical and mental abuse by former attendees.

Watch: Danielle Bregoli, aka Bhad Bhabie, on her experience at Turn-About Ranch. Post continues below video.

It began with allegations of sexual abuse from Hannah Archuleta, a former teen resident of the ranch, who attended after appearing on Dr Phil in 2019, when she was 17.

She is suing Turn-About for negligence, represented by high-profile attorney Gloria Allred, after alleging that within two weeks of her arrival, a man working at the ranch groped her.

"Within the first two weeks at Turn-About Ranch, a male staff member came up behind me and suddenly grabbed my butt," Archuleta said.

"I decided not to tell anyone because I was scared of being punished, and I hoped that he would not touch me again. Sadly, I was wrong."

After a second alleged assault, Archuleta reported it to staff and claimed they "took no remedial action" and "retaliated" by subjecting her to further abuse.

"I was required to spend extra time picking up horse manure, walking in circles around a horse corral, and sitting at a desk facing a wall for hours," she stated.

"I also had to do forced labour outside in below-freezing temperatures and sleep on a wooden plank with no pillow."

Archuleta, now 19, said she wanted "justice and I do not want what happened to me to happen to anyone else".

Turn-About Ranch strongly denied the allegations, stating that "the account given by opposing legal counsel to the media was incomplete, to say the least".

But the allegations have inspired others to come forward with similar tales, including one of Dr Phil's most recognisable guests, 17-year-old Danielle Bregoli, now known as rapper Bhad Bhabie.

Bregoli appeared on Dr Phil in 2016 and became a viral hit for her catchphrase 'Cash me outside'. After her appearance, she too attended Turn-About.

In a YouTube video in cooperation with Breaking Code Silence, a movement of survivors of the 'troubled teen industry', alleged she also experienced abuse.

She had previously spoken about the ranch in February 2021, stating similar things.

"When I had seen the punishments [Archuleta] was given, I knew I really had to say something," she said in the video.

"So, Dr Phil, I'm going to give you from now to April 5 to issue an apology, not only to me, but to Hannah, and any other child you sent to Turn-About or any other program like this. If you don't, I'm gonna handle things my way."

She said the ranch was in the middle of nowhere in Utah, effectively meaning those sent there are captive.

"I was taken there against my will... [they] come in the middle of the night, they don't tell [the kids] where they're going, they just take them, handcuff them, and put them in the car. It's basically like kidnapping."

Bregoli alleged she witnessed teens being restrained and given harsh punishments. She also said she suffered sleep deprivation and was not given adequate warmth and meals.

She said she'd previously kept quiet out of fear of not being believed.

"That's the thing about these places. You have no evidence," she said.

Another young woman, Abbie Parker, 21, released a series of YouTube videos in March 2021 about her experiences. She said she was at the ranch when Bregoli arrived and that she believed her and Archuleta's accusations.

Parker claimed attendees could not sing or dance and recalled a punishment that involved walking in torrential rain for two days.

These accounts echo the stories shared by Paris Hilton in her 2020 documentary This is Paris. Hilton alleged she was abused at a similar facility, Provo Canyon School, also in Utah.

Archuleta said it was Hilton's account that inspired her to speak up.

In 2012, a mother sued the ranch for allegedly torturing her daughter when she lived there in 2005, The Washington Post reported.

The report found some of these pre-dated Dr Phil's referrals. Turn-About Ranch's website touts its long-time relationship with the Dr Phil show.

So far, Dr Phil himself has not responded to the accusations. Instead, the Dr Phil Twitter account live-tweeted an episode of RuPaul's Drag Race, leading to criticism from Twitter users and Bregoli.

Reply
Upvote
Why would anyone be okay with a place that wants to kidnap their child?
R
rush a year ago

Reply
Upvote
@cat I guess if parents are at the end of their tether, and someone they (mistakenly) trust like Dr Phil offers them a solution, they'll grab at anything. I have no doubt Dr Phil and the people from the 'school' talk a good game, it might not be that hard to brainwash overwhelmed parents into thinking that its all just a healthy dose of "tough love". Poor kids.
C
cat a year ago

Reply
Upvote
1 upvotes
@rush I think any parent who agrees to ‘we’re going to accost your child in the middle of the night and taken them away forcibly without explanation’ should face abuse charges. That’s a felony, plain and simple.
L
laura__palmer a year ago

Reply
Upvote
@cat I agree. Setting your kid up like that is disgusting. It's trauma-inducing and I fail to see how anyone could think that would help their kid.
L
laura__palmer a year ago