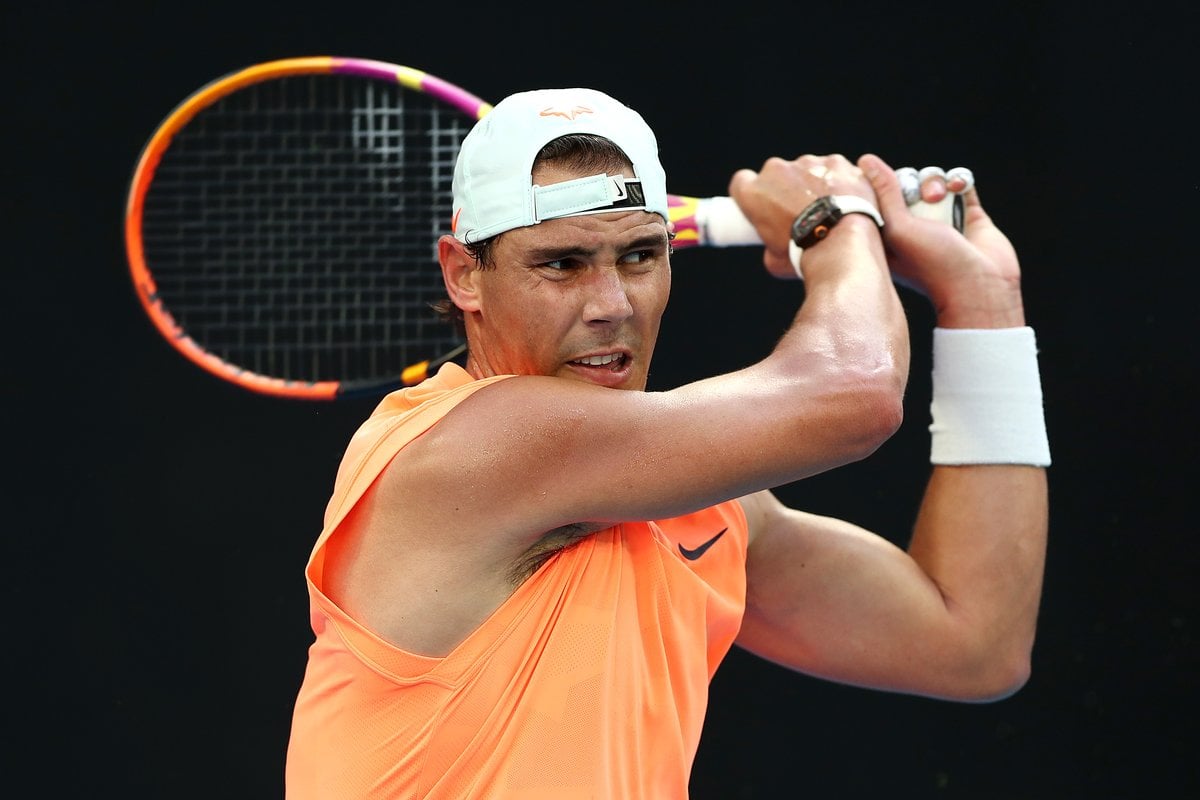 It’s no secret that tennis players are renowned for having bizarre match rituals and superstitions.

From demanding a particular "lucky ball", to wearing the same socks without washing them, Novak Djokovic, Serena Williams and dozens of other players are famous for their unique match quirks.

But when it comes to watching Rafael Nadal, the game often plays out like clockwork.

What happens when you take your tennis obsession from the court to the office? Tennis-obsessives will understand. Post continues below.

The men's world no. 2, who is currently competing at the Australian Open, has incredibly predictable behaviour on the court.

When Nadal arrives at each match, he plants his energy drink slightly in front of his water bottle with both labels perfectly facing the court. At every change of ends, he straightens his two water bottles – ensuring they’re perfectly aligned.

Before each and every serve, he places his hair behind his ear and fiddles with his shorts.

And after every single point, Nadal towels himself – even if he isn’t sweaty.

It’s an interesting line of behaviour that’s often led Nadal to be accused of deliberately wasting time to distract his opponents.

In fact, during a match at the Australian Open in 2020, Nick Kyrgios mimicked Nadal when the chair umpire gave him a time violation.

While playing against France’s Gilles Simon, the Australian tennis player pretended to tuck his hair behind his ears and picked at his underwear following the violation, mimicking Nadal’s habits.

Of course, one of Nadal’s most infamous court-side habits involves the specific placement of his water bottles.

In September 2019, Nadal appeared to get frustrated when a ball person placed a third water bottle in his area as he played against Croatia’s Marin Čilić.

Similarly, the Spaniard was involved in an incident with a ball person in 2020 during his match with Nick Kyrgios.

When a ball person accidentally moved an object (believed to be one of his water bottles) at his courtside bench, Nadal protested, leading to a number of boos from the Australian Open crowd.

"Rafa gave strict instructions to the ball boy not to touch something," Todd Woodbridge said in commentary.

In his 2011 autobiography, Rafa, the tennis player denied that his water bottle ritual is based on superstition.

"I put my two bottles down at my feet, in front of my chair to my left, one neatly behind the other, diagonally aimed at the court," he wrote.

"Some call it superstition, but it’s not. If it were superstition, why would I keep doing the same thing over and over whether I win or lose?" he explained.

"It’s a way of placing myself in a match, ordering my surroundings to match the order I seek in my head."

In his autobiography, Rafa also wrote about his pre-match routine, sharing that he has a freezing cold shower roughly 45 minutes before a match.

"Freezing cold water. I do this before every match. It’s the point before the point of no return. Under the cold shower I enter a new space in which I feel my power and resilience grow," he said.

"I’m a different man when I emerge. I’m activated. I’m in 'the ﬂow', as sports psychologists describe a state of alert concentration in which the body moves by pure instinct, like a ﬁsh in a current. Nothing else exists but the battle ahead."

In the past, some tennis fans have questioned whether the former world no. 1 could suffer from obsessive-compulsive disorder.

Despite the claims, Nadal has never confirmed or denied the reports.

In fact, when asked about his behaviour, Nadal responded: "It is something you start to do that is like a routine. When I do these things it means I am focused, I am competing – it's something I don't need to do but when I do it, it means I'm focused."

Nadal's uncle and coach, Tony Nadal, has also commented on the rituals, telling a Spanish website in 2012: "He has told me before he can stop doing them, and I have told him to do it."

He continued: "It does not affect his game, but if he needed those things to play well, it would be bad."

FUN FACT! ????@RafaelNadal doesn't hand his towel back to the #VegemiteBallkids until he walks past the @Melbourne sign.

Here are just some of the behaviours and rituals that Nadal appears to partake in:

"I see such things providing some consistency and sense of control," Dr Naylor told Al Jazeera.

"Superstitions are harmless for the most part but become harmful when they control the player rather than the player controlling them," he added.

"In tennis, routines between points allow the player to put the previous point behind them, relax and then get focused and energised for the point that lies ahead. That is crucial," Naylor added.

Of course, Nadal is not the only tennis player with unique quirks. Here are just some of the habits viewers have noticed in other players:

So what does it actually really matter if he has OCD or not? We need to focus on his talent on court, not the things he feels he needs to do to maintain focus and confidence.

Nettles a year ago

I would say that he is definitely on the spectrum somewhere.

Indeed - the spectrum of awesomeness!
This is not a biased opinion from a fan at all, Nope, no way ;o)