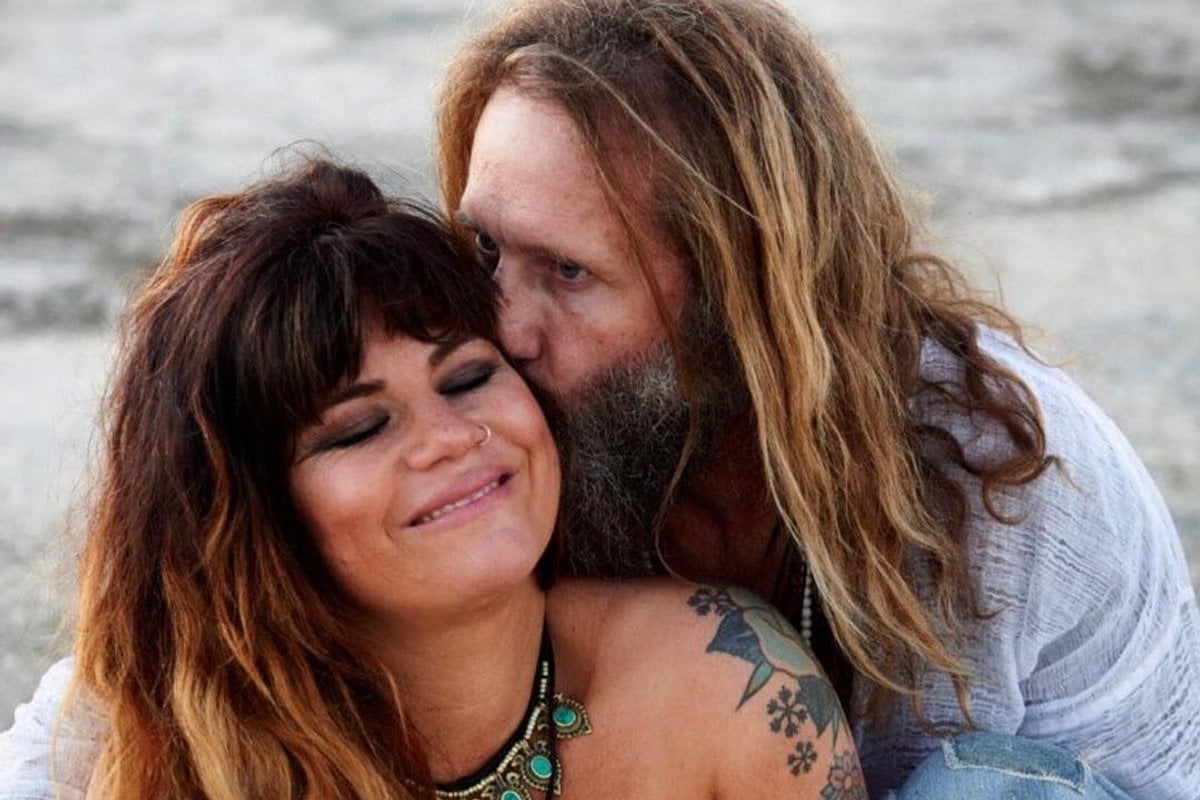 Sitting on her bed with a girlfriend, Constance Hall was discussing how much she loved her husband.

"Do you think Denz is your soulmate?' her friend asked.

Soon after, they heard a familiar voice yelling from another part of the house. Constance had realised she didn't know where her husband, Denim Cooke, was. His son Zeyke, 16, told her his dad had gone on a motorbike ride with his mates.

And now one of those mates was yelling her name.

"He was like 'Con, Con!' and I was like 'who's that? Is that Richard?'" Constance told Mamamia's No Filter podcast.

For more from Constance's chat with Mia Freedman, listen to No Filter. Post continues after audio.

Richard said Denim had been in a motorbike accident, coming off his bike and sustaining a number of serious injuries.

"I was in shock. Zeyke started walking towards us, Zeyke doesn't have a mum, and I just didn't know whether I wanted to be with Zeyke or find out what was going on," Constance explained.

"I said, 'just tell me, what, is he dead?' and Zeyke started shaking his head and going 'no, no, f***king no'. The whole moment just gives me goosebumps and makes me feel so sick."

Thankfully, Denim was alive. But he was not in a good way: He had broken his back in four places, broken seven ribs, broken his shoulder and foot and sustained two punctured lungs in the August 16 accident. And then there was his brain.

Rushing to the scene, Constance said it was like a movie. A helicopter was on its way to transfer Denim from Margaret River to a hospital in Perth, but paramedics and police were already there.

"I was wearing a big fur coat, no shoes and a little summer dress under it. I felt like I was watching myself running down the street and pushing through everyone.

"I just saw his legs and they were grey. They had no colour in them. I saw them wheeling him and I was like, oh my god. He looked like a corpse, you know? And they were wheeling him to the ambo. They have to get you stable before they put you on the plane. They were just trying to get him stable."

Once in hospital, Denim was put in a coma. At first, doctors gave the family a "fairly okay" prognosis, given the circumstances.

"They said 'there's two brain injuries, he's broken his back in four places but the spine looks intact, you're definitely not going to be going home for a couple of weeks - put it that way'."

But the following day, a doctor gave Constance a harsh reality check.

"He looked at me and goes 'I'm sorry, I think you might have the wrong idea about your husband's accident. You're very naïve to think you're going to see him or speak to him again. He's had a very serious accident, he's got two brain injuries. A metal plate, Constance, is drilled into his head. We don't do that for a mild injury'.

"I was like, 'what do you mean?' He was like 'the chances of you ever speaking to your husband again are very mild. If he wakes up, chances are he'll be severely brain damaged'. I was by myself at that point, and that's when I lost it.

"I called my sister and I was just bawling my eyes out, I couldn't breathe, I was like 'I'm never going to see him again'."

Constance said she and Denim live in a bit of a bubble; living together and working together in Margaret River. She said she didn't feel like anything was real until she'd told him about it.

That was how she processed things. So she couldn't process this.

"I didn't know how to process it. There he was, this beautiful man, so vulnerable lying there... The idea of losing him was just too much."

At the hospital, Constance told Denim everything she was doing, just like she normally would. She told him about their lives together, and their blended family of seven kids; four from her previous marriage, Denim's two teenage sons, and two-year-old Raja.

"I loved him so hard, every second of the day," Constance recalled. "Telling him about our life, about Raja and all the kids. He just had to come back. He had no choice, because I was luring him back 24 hours a day."

Denim slowly began waking up and talking, but he had amnesia and doctors said "it would be a miracle for him to ever retain information again".

"I never really knew what amnesia was like, but they literally think you're a fish one minute and he was just doing the most random stuff," Constance said.

Constance, as she often does, wrote a blog post. She shared the news publicly herself before the media could, opening up about most of Denim's injuries, except his brain.

"I don't know if you're very spiritual and people often shut me up because it's not scientifically proven," she explained, "But every time that I did update, which was probably about four times during the crisis, I would get to Denim in the morning and there'd been some huge progress...

"I was asking for positive vibes. When the brain needed to be cooled down, I was asking for vibes of the ocean. When I wanted to find out if he was going to be responsive, I asked for people to think of the colour blue because that's the chakra... Whether you believe it or not, however you get there, you get there. The positivity and the love that was sent to him I think had a huge impact."

Denim recovered better than expected from his physical injuries and overcame pneumonia too, to be released home in early October.

Constance never ever let herself imagine Denim would get to this point, choosing to think of the worst-case scenario as a way of managing her stress and anxiety.

"I hit rock bottom and then I think that's what saved me, the doctor had said 'he's not coming back' and had he not have said that, I wouldn't have been able to celebrate the little things... I [cried] for three days, and then for two months I didn't cry a single tear.

"I just championed him, I just loved him hard."

Denim recovered rapidly, though he now lives with a traumatic brain injury and adynamia, one of the most common side effects following a TBI.

It means lack of motivation initiation, where a person may show decreased or lost drive, and have difficulty planning and carrying out activities. He has started taking medication to help.

It's been a tough and traumatic road, but Constance no longer just knows Denim is "100 per cent" her soulmate. He's now 100 per cent her "miracle man" too.

Reply
Upvote
1 upvotes
He's had a very close shave there, by the sound of things he's incredibly lucky to have come through it all. It must have been a terrible time for the two older boys, facing the possible loss of their dad after already losing their mum. It's always hard when the doctors have to tell you the worst case scenario stuff. Of course you need to be prepared, but it's incredibly scary, and the waiting to find out what's what is awful. I'm glad he's doing ok, best of luck to them in dealing with it all.
News
General
Opinion
True Crime
Politics
Sport
Explainer
Entertainment
Celebrity
Reality TV
Movies
TV
Books
Rogue
Royal
Lifestyle
Beauty
Fashion
Weddings
Home
Wellness
Health
Fitness
Travel
Food
Parents
Before The Bump
Pregnancy
Baby
Kids
Teens
School
Parent Opinion
Work & Money
Money
Finance
Career
Lady Startup
Relationships
Sex
Dating
Separation
Friendship
Family
Real Life
Couples