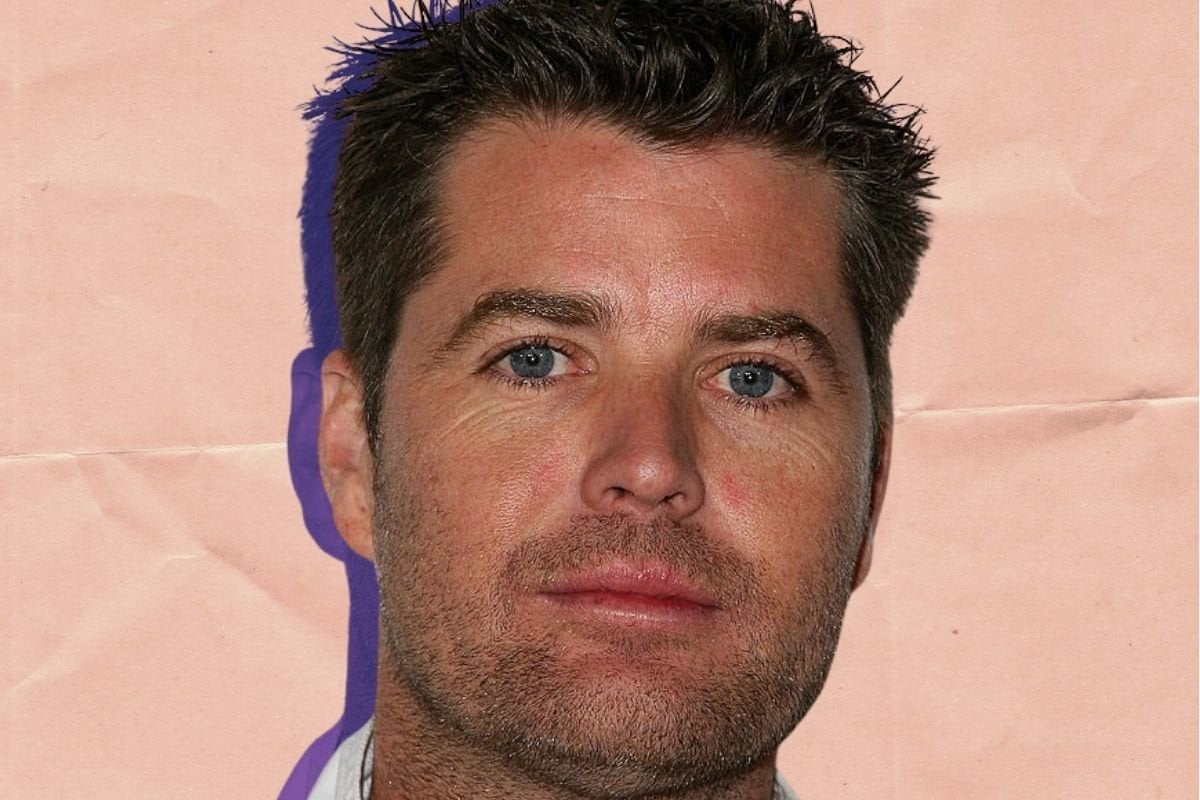 Besides the word ‘chef’ in Pete Evans’ Instagram handle, the career in which he trained and practised for decades is largely overshadowed in his social media feed.

There might be a nice salad photo, or ‘keto dinner’ thrown in every so often, but they’re mostly lost in a sea of memes, videos, responses to media controversies, and, recently, commentary on public health and politics.

Right now, his last few posts certainly have nothing to do with food.

On Sunday, Evans posted a photo to of a cartoon to his Instagram and Facebook pages, where he has a following of 1.5 million people.

The cartoon featured a caterpillar wearing a Make America Great Again hat, talking to a butterfly with a Black Sun symbol on its wing. The Black Sun, also referred to as the sonnenrad or sunwheel, is an ancient European symbol that was appropriated by the Nazis and has now been adopted by Neo-Nazis. It is used by right-wing extremists like the Christchurch terrorist who murdered 51 people in 2019.

"An oldie but a Goldie," Evans captioned the photo.

When a follower commented on the meaning of the symbol, Evans seemingly confirmed he was aware.

“The symbol on the butterfly is a representation of the black sun lol,” the follower said.

"I was waiting for someone to see that," Evans responded. 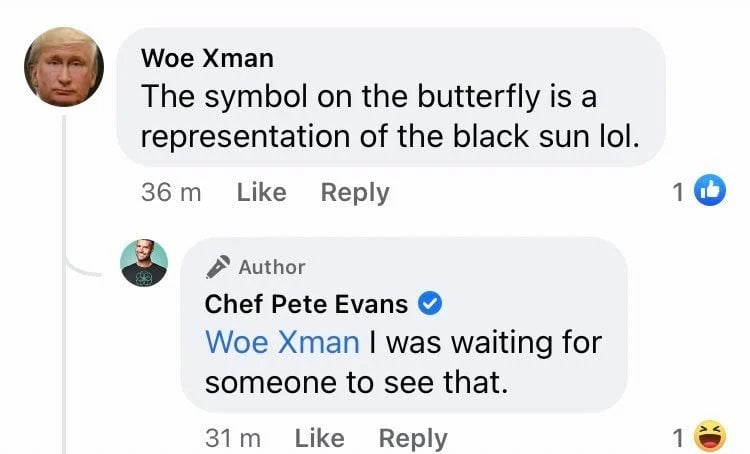 Magda Szubanski also shared the following screenshot of Pete Evans allegedly saying, "you may wish to have another look about the true history about Germany".

On Monday evening, he apologised to people who "misinterpreted" the photo. The damage, however, was already done.

Pan Macmillan, the publisher of more than a dozen of Evans' cooking books, announced on Monday they were ending their lucrative relationship with the chef.

It was also announced that Evans had been due to appear on the next season of I'm A Celebrity... Get Me Out Of Here!, but had been removed from the cast.

So, how exactly did we get... here? From the Evans we saw each night on our television screens, making banter with pal Manu Feildel and hopping from dinner party to dinner party, to a man being denied opportunities because of his dangerous views.

During a 60 Minutes interview in June this year, Evans spoke about what his life was like growing up. He described being sick as a child and as a teen, but mostly his 'normal' upbringing with a balanced diet and yes, vaccines.

He said his first major 'turning point' came after reading a Tony Robbins book and attending a seminar as a 19-year-old, while completing his chef apprenticeship.

"It just seemed like such an invitation, that's the only way I can describe it, as an invitation for me, Pete Evans to go on a journey... I've learned that we are actually here for a purpose, and that is to evolve, to constantly learn."

From there, he began questioning "everything".

Originally from Melbourne, Pete and his brother Dave opened their first restaurant Pantry in Brighton in 1993.

In 1996, they moved to Sydney where Evans, his brother and business partner opened Hugos restaurant in Bondi, then a number of other 'Hugos' in the years following. 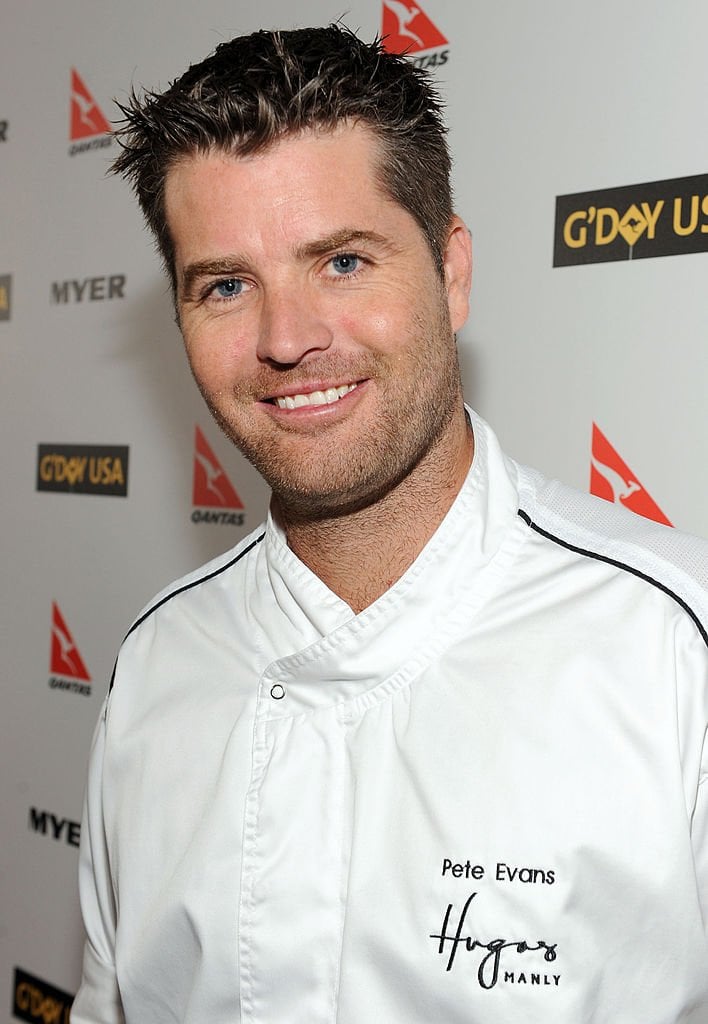 At its peak, Hugos was considered extraordinary. From 1998 to 2011, the restaurants in the Hugos Group were awarded eight Sydney Morning Herald 'Chef's Hats', 21 'Best in Australia' awards, and three 'Best pizza in Australia' awards at the Australian Fine Food Show. In 2005, Hugos won 'Best pizza in the world' at the American Pizza Challenge in New York City, and no, it was not Paleo.

The success of the business afforded Evans some spectacular opportunities: he held a pizza-making and cocktail class at Hugos Pizza Bar during Oprah's Ultimate Australian Adventure and cooked with Wolfgang Puck at the G'Day USA: Australian Week black tie gala event in 2010.

He also started making TV appearances. His first television job was for The LifeStyle Channel's Home series from 2001-2005, then he starred in travel series Postcards from Home and a number of cooking shows - including a guest spot on MasterChef Australia - before landing the gig that would make him a household name in 2010.

In 2010, Evans joined Manu Feildel as a judge on My Kitchen Rules, which over the decade won the Logie Award for the Most Popular Reality Program and was the highest rated reality TV competition in the country, with about two million weekly viewers in 2015.

It was the year he split from first wife Astrid Edlinger - the pair were married for 12 years. They share daughters Chilli and Indii.

"He's got more famous and it inevitably changes anyone," Edlinger said after the breakup, the Daily Mail reported.

Evans met Nicola Robinson in 2011. Formerly known as Nicky Watson, the 41-year-old was a former model and New Zealand socialite who became a household name across the ditch when she appeared on popular reality TV show Celebrity Treasure Island in 2001.

The first sign of 'Paleo Pete', which he would come to be known, came a year later in 2012.

Sunday Life magazine approached him to take part in their weekly column, My Day on a Plate, which offered readers a pervy look at the sometimes bizarre eating habits of celebrities.

But Evans topped them all. He began his morning with "a smoothie of blended alkalised water, organic spirulina, activated almonds, maca, blueberries, stevia, coconut kefir and two organic, free-range eggs."

The column seemed to momentarily break Australia. Everyone sort of cocked their heads: What the hell were activated almonds?

Around the same time, he had a falling out with his brother Dave and stepped back as a "working partner" from Hugos, which also resulted in years of silence between the siblings.

"For the past five years, Pete has had less and less to do with the business as he spends 10 months a year working full time on MKR and his other television and book commitments," a Hugos Group spokeswoman said in a statement to The Sunday Telegraph.

After three years of dating, Robinson and Evans got engaged under New York's Manhattan Bridge in 2014.

A year later, his brother Dave confirmed they had made up, but he had no interest in following his brother's path to fame.

"Celebrity creates a loss of your privacy - and I like my life the way it is," he told the Manly Daily in 2017.

"I look at what happened to people like my brother, other people, they're set up to be brought down by the fame."

For a decade, Evans seemed to walk between his two personas: Paleo Pete, who advocates for staring at the sun and recommends bone broth for babies, and MKR judge Evans, who puts his Paleo principles aside for a few weeks each year to taste test the food of passionate home cooks.

Finally, in May, Evans was cut free from his Channel 7 contract and released from the shackles of family-friendly reality TV.

And his Instagram account is the result. That trajectory seems to be continuing, as his views, or at least his willingness to share them, become more and more extreme.