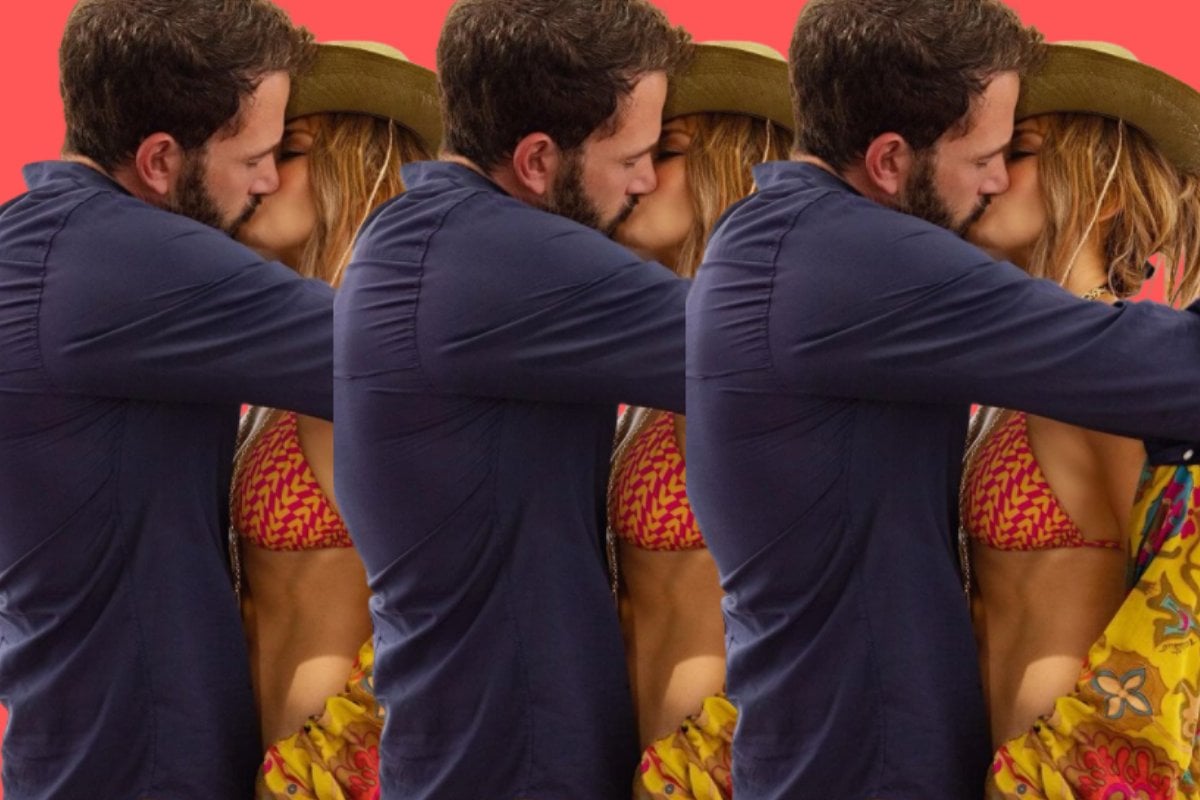 In just the space of five months, they have delivered us the greatest redemption storyline Hollywood has ever seen. Their story feels like it's ripped from the script of classic rom-com. You can almost picture the late, great Nora Ephron and Nancy Meyers getting together in a room, coming up with this narrative, and just knowing it will be both a box office hit and a cult favourite.

Bennifer getting back together is the stuff of fairytales, and it's exactly the kind of fairytale we needed in this moment in time.

We've embraced their story of two young lovers reconnecting in their 50s, with the same ferocity at which we embraced the idea of Bradley Cooper and Lady Gaga falling madly in love with each while filming A Star Is Born.

We needed this, and that's exactly what Affleck and Lopez were banking on.

In March, Lopez aka JLo aka Jenny From The Block broke up with her fiancé Alex Rodriguez aka A-Rod. It was a moment A-Rod marked by creating a shrine dedicated to JLo, filming said shrine and uploading it to Instagram, with Coldplay's 'Fix You' playing in the background.

It was exactly the kind of bizarre, train crash-y goodness the tabloids eat for breakfast.

And it was precisely the kind of narrative JLo has worked hard to avoid during her 30-plus years in the entertainment industry.

For over three decades, JLo has been at the top of her game. A triple threat - she's released chart topping album after chart topping album, starred in a bunch of movies (including some of the best rom-coms of the 2000s) and danced with the stamina of a 20-year-old at a nightclub, in front of packed crowds into her early 50s.

Despite three marriages and five engagements, Lopez has never been given the 'Sad Jen' narrative that Jennifer Aniston, another famous Jen in her early 50s, has had bestowed upon her.

Despite her public breakups and blended families, she's never been given the 'Britney treatment'.

She's never been told to grow up or act her age. To move aside or to age gracefully.

On the whole, the media and the public have embraced JLo wholeheartedly. Even championed her.

But at the start of 2021, JLo could feel that tide beginning to turn.

Listen to this episode of Mamamia's daily pop culture podcast, The Spill, where hosts Laura and Kee discuss a hidden detail you probably missed in ~that~ JLo photo. Post continues after podcast.

Meanwhile, Ben Affleck has been quietly rebranding for the past few years.

Affleck, a Boston boy with a great chin, first burst into the public consciousness in the late 1990s when he wrote and co-starred in Good Will Hunting with his best mate, Matt Damon (another possessor of a great chin).

From there, Affleck's career went from strength to strength. He was at the top of his game when he met, and later started dating Lopez, in the early noughties. At the time, their story dominated headlines for months on end. The media, and the public, couldn't get enough of the bad boy from Boston and the diva from The Bronx creating their own narrative of what success looks like.

The matching tracksuits. The designer cars. The expensive watches. The yachts. The butt kissing on the yachts.

All this while never forgetting where they're from (the block).

We loved every minute of it, and Bennifer knew exactly how to play it. Until it all became too much for them.

Bennifer split up and grew up. Affleck married another famous Jennifer (Garner) and continued to dominate at the box office.

And then, in 2015, Affleck and Garner announced they were getting a divorce.

Then came the 'Sad Affleck' era. Affleck, now entering middle age and losing roles to much younger men, was photographed standing on the beach in a towel, staring out at the ocean, a giant tattoo of a phoenix rising from the ashes on his back.

Then there was the photo of Affleck standing outside, smoking, exhaling, like it's all gotten a bit too much for him.

And then there were photos of 'Sad Affleck' morosely walking around the streets of LA, carrying his Dunkin' Donuts order.

Sad Affleck became a meme. A state of being. A reference point for someone hitting rock bottom.

In early 2020, just as everyone was entering lockdown, 'Sad Affleck' began to turn his image around. His (much younger) Deep Water co-star Ana de Armas started accompanying him on Dunkin' Donuts runs and it was soon confirmed the couple were locking down together.

But by the end of the year, that relationship was over. And 'Sad Affleck' was threatening to come back.

Then in late March/early April, something happened.

Someone slid into someone's DMs, or more likely given their age, someone gave someone a call, and suddenly the possibility of a Bennifer reunion was on the cards.

Over the last few months, the media-savvy couple have drip fed us tiny morsels of their new, blossoming relationship.

And then over the weekend, to mark her 52nd birthday, JLo posted a series of photos of Instagram. One of which featured her and Affleck have a good ole' fashioned snog.

It was finally confirmed. Bennifer is back, Sad Affleck is dead, and JLo has never been more... JLo.

In the space of just a few months, the couple have turned their own narratives around, made us root for them once more, and given us a much needed distraction. A fun little dream we can invest in.

They've just pulled off the greatest redemption storyline in the history of Hollywood.

And, honestly, we just want more.

Reply
Upvote
1 upvotes
On Busy Philipps' podcast, her co-host Caissie St Onge has put forward a theory that they are re-enacting the Jenny From The Block film clip, and if you look at some of the paparazzi photos, they're starting to line up! The photos that just came out of them on a yacht together look veeery similar to the video, he's wearing the watch from the video, it's the song's 20th anniversary coming up... keep an eye out, folks, is the next paparazzi photo going to be them at a gas station reading about themselves in a magazine? 🤷‍♀️🤔
M
mamamia-user-482898552 a year ago