Forensic testing has confirmed remains found during a search of Victorian bushland late last year are that of Russell Hill and Carol Clay who disappeared almost two years ago.

The remains were found in bushland near Dargo in late November, after 55-year-old Greg Lynn was charged with two counts of murder.

The case has been one of the force's most high profile in recent years. Hill and Clay were last heard from on March 20, 2020 when Hill, an experienced outdoorsman, made a call via high-frequency radio saying he was at Wonnangatta Valley. Campers found Hill's car destroyed by fire at their campsite near Dry River Creek Track the following day.

Read more: The disappearance of Russell Hill and Carol Clay.

Their remains were discovered in bushland near Dargo, in remote high country in the state's east.https://t.co/qfLRG0iKFd

Thousands of NSW nurses and paramedics set to strike tomorrow.

Isabella here, to get you across the news stories trending this afternoon!

Thousands of NSW nurses from public hospitals will walk off the job tomorrow for the first time in a decade as part of a long-running campaign for better staffing and pay. Tuesday's strike will impact 150 public hospitals when nurses strike from 7am.

The timing and length of the action will vary from hospital to hospital and skeleton staff will remain at work to ensure patient care. NSW paramedics will join the strike on Thursday, after members of the Australian Paramedics Association voted almost unanimously to join the industrial action.

Thousands of NSW nurses will walk off the job this week for the first time in a decade as part of a long-running campaign for better staffing and pay:https://t.co/fdp3VJXN5R

NSW Health Minister Brad Hazzard met with the union on Monday. According to union reps, there was "nothing to us in concrete terms around improved wages". The union has a clear set of demands, including nurse-to-patient ratios in every hospital, a withdrawal of a section in the Workers' Compensation Act requiring workers to prove they caught COVID-19 at work, and a pay rise of more than 2.5 per cent. For paramedics, there is a call for more resources - including 1500 more paramedics - as the health system strains under the burden of the two-year pandemic.

The side of Kanye’s Instagram spree we can’t ignore

This weekend it was hard for anyone to ignore Kanye West's Instagram posting spree and the fact he was pulling Kim Kardashian and Pete Davidson into the fray with him. But there's a side of this story we can't ignore.

Plus, Cardi B deserves a little attention this week, thanks to the fact her album Invasion of Privacy is now officially the first album by a female rapper to spend 200 weeks on the Billboard 200 charts.

And Vogue has dropped another cooking video with our favourite beneficiary of Hollywood nepotism, the one and only Brooklyn Beckham. This time around his fiancee Nicola Peltz was involved and now there's a different side to the joke.

Listen to The Spill this arvo!

The biggest moments from the 2022 Super Bowl halftime show.

Hello everyone! I've just come up for air after holding down the fort over on our Super Bowl 2022 halftime show live blog.

The most watched and talked about musical event of the year (sorry to the Grammys, but you know I'm right) has come and gone, and it's left me feeling energised and nostalgic as hell.

Dr Dre, Snoop Dogg, Mary J. Blige, Kendrick Lamar, Eminem and surprise guest 50 Cent put on an incredible show at the sporting event in Los Angeles, California, which has already been dubbed by many as the best halftime show ever.

Anyway, if you need me, I'll just be over here with 'California Love' on repeat.

By Margaret Scheikowski and Greta Stonehouse

Jailed former NRL star Jarryd Hayne's sexual assault convictions have been quashed and a third trial has been ordered.

The 33-year-old was found guilty of two charges of sexual assault without consent of a woman in her NSW Hunter bedroom on the night of the 2018 NRL grand final.

The ex-Parramatta player faced a retrial after his first ended with a hung jury.

He was jailed in May for five years and nine months with a non-parole period of three years and eight months.

The NSW Court of Criminal Appeal on Monday ordered another trial, after quashing his convictions.

Justice Helen Syme's directions of law were "flawed in almost every possible way", he argued.

While prosecutor Brett Hatfield admitted the language could have been tighter, he said "perfection is not required". 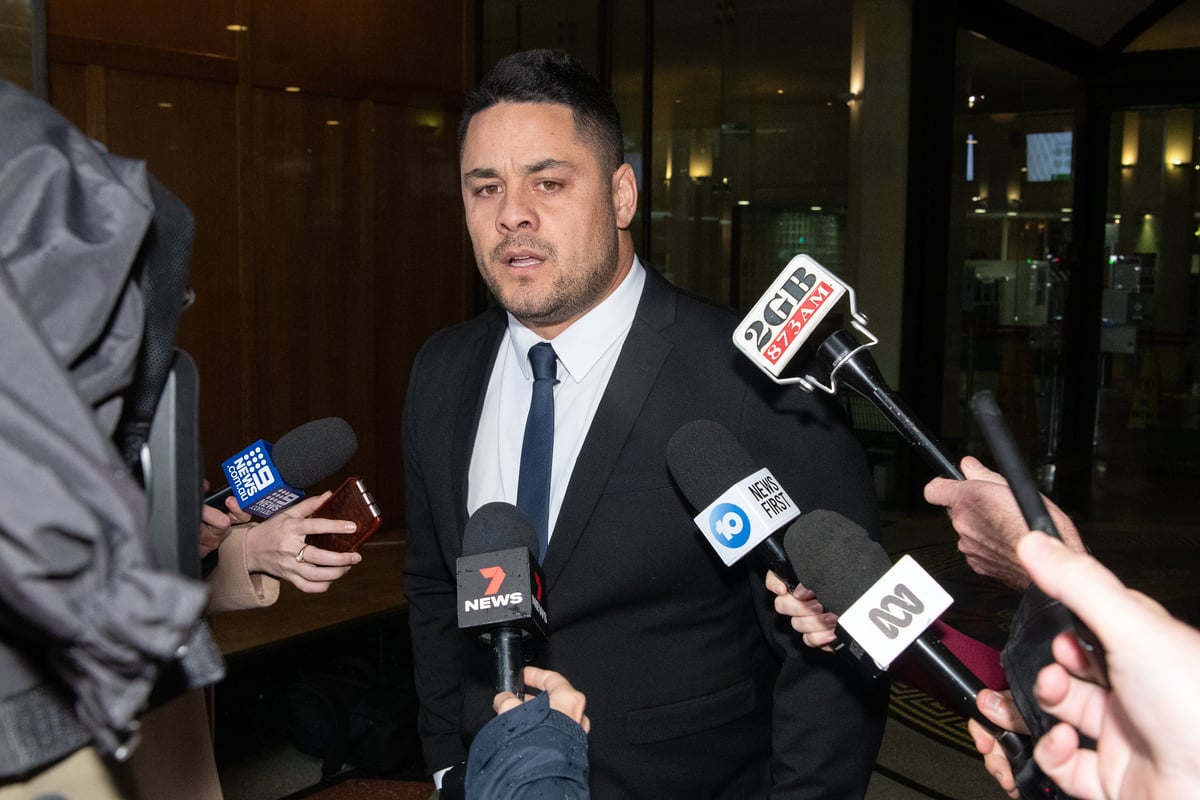 Another ground was the overruling of evidence admitted into the first trial, which Mr Game said explained the complainant's state of mind in her "abiding interest in having sex with Jarryd Hayne".

He also disputed a "highly prejudicial" outburst from the woman in the first trial when she yelled "no means no" under cross-examination, played before his second jury and likely to bring about a "very sympathetic response".

But the Crown argued the woman appeared very deflated and flat directly after this exchange, and her monotone responses would be incongruent without viewing the preceding moments.

Both trials were told Hayne had left his friend's bucks party to meet up with the woman and forcibly performed oral and digital sexual intercourse on her.

"I do not accept the offender did not know or did not hear the victim telling him she did not want to have sex with him," Judge Syme said.

Chief Justice Tom Bathurst and Justices Helen Wilson and Ian Harrison are to publish the reasons for their appeal decision on Monday.

Jenny Morrison calls out Grace Tame in 60 Minutes interview, and all the news you need to know this morning.

Whether you're going out tonight or settling in with some UberEats on the couch (raises hand), we can all agree - celebrities do Valentine's Day... very differently.

My colleague Isabella Ross has rounded up The 7 most ridiculous ways celebrities have celebrated Valentine's Day... and it's pretty cringey.

But before you get stuck in, lets get you across the five biggest news stories women are talking about this morning.

Jenny Morrison says she was left 'disappointed' after she and her husband, Prime Minister Scott Morrison, met with former Australian of the Year, Grace Tame, last month.

In an interview with 60 Minutes, Jenny responded to the awkward encounter with Tame at The Lodge in January, calling out the need for "manners and respect".

"I just found it a little bit disappointing, because we were welcoming her into our home," she told Karl Stefanovic.

"I just wish the focus had been on all the incredible people coming in. I respect people that want to change things, stand up for their beliefs and are strong, but I still think there are manners and respect."

When asked whether she wants her daughters to look up to advocates like Grace Tame, Jenny said, "I want my daughters to grow up to be fierce, strong, independent, amazing people.

"I think they can still do that and show kindness to other people and be polite and have manners."

In a rare interview with #60Mins, Jenny Morrison says she was left ‘disappointed’ after a tense meeting with former Australian of the Year Grace Tame in Canberra earlier this year. pic.twitter.com/V1fTFGmgaA

As you would have seen on your social media feeds, thousands of protesters surrounded Parliament House in Canberra on Saturday.

The key complaint of the protesters was vaccine mandates across the country, something Prime Minister Scott Morrison says are largely the decisions of state premiers, not his.

He insists his government has only ever supported mandates that relate to aged care workers, disability workers and those who are working in high-risk situations in the health system.

Thousands of protestors have congregated along Federation Mall in Canberra. Some of the attendees have driven from all over Australia to join what is being called the 'Convoy to Canberra" protest. https://t.co/OF81oZXOfr #Canberra #7NEWS pic.twitter.com/GY7uVXCFWX

But Labor senator Kristina Keneally said it was the prime minister who set up the national cabinet and was prepared to take all the credit when the premiers took their measures.

"As soon as a group of protesters walks into town critical of some of those decisions, he points the fingers at the premiers, says 'it's not my fault, it's theirs'," Senator Keneally told ABC's Insiders program.

Victoria will lift its COVID-19 health system alert as state authorities declare the worst of the Omicron wave has passed.

At midday today, the unprecedented "code brown", implemented more than three weeks ago, is due to be lifted.

Health Minister Martin Foley said on Friday the government is confident the alert can be safely lifted, but hospitals are "still going to be very, very busy".

Melbourne public hospitals will continue to be restricted to emergency and urgent elective surgery with the exception of the Peter MacCallum Cancer Centre and the Royal Eye and Ear Hospital.

Scott Morrison warns the situation in Ukraine has reached a dangerous stage, as the prime minister temporarily suspends the operations of the Australian Embassy in Kyiv.

Foreign Minister Marise Payne said the government has directed the departure of embassy staff to a temporary office in Lviv with the build-up of Russian troops on the border.

"The situation is deteriorating and is reaching a very dangerous stage," Morrison said on Sunday.

"I want to send a very clear message on behalf of Australia ... that the autocratic, unilateral actions of Russia, to be threatening and bullying Ukraine, is something that is completely and utterly unacceptable."

More than a dozen countries including Australia have urged their citizens to leave Ukraine amid warnings that a Russian invasion could be imminent.

New intelligence suggests Moscow could launch an attack on Ukraine as early as this week.@StevenErlangerhttps://t.co/nIdl7NfDxV

Koalas in NSW, Queensland and the ACT have officially been listed as endangered, after populations have plummeted from drought, bushfires and land clearing.

The Environment minister, Sussan Ley, announced the move on Friday to help boost the level of protection for the species.

"Today I am increasing the protection for koalas in NSW, the ACT and Queensland, listing them as endangered rather than their previous designation of vulnerable," said Ley.

"The impact of prolonged drought, followed by the black summer bushfires, and the cumulative impacts of disease, urbanisation and habitat loss over the past twenty years have led to the advice."

⚠️ BREAKING: The Australian Government has uplisted koalas on the east coast from Vulnerable to Endangered.

This is a bittersweet outcome, but a critical step towards reversing the decline of koala populations. #KoalasForever

It comes after the government announced $50m to help the species last month.

That's it, you're all up to speed.

We'll pop back in here to bring you more of the biggest news stories throughout the day.

Is it ok if friends are more important than your partner?

This Valentine's Day we ask ourselves who really are our soulmates?

Is it the person we choose to have a physically intimate relationship with? Or is it the people we have collected as part of our chosen family over time?

In this episode we explore whether it's ok that the most important person in your life is not your spouse or your partner, but your bestie for life.