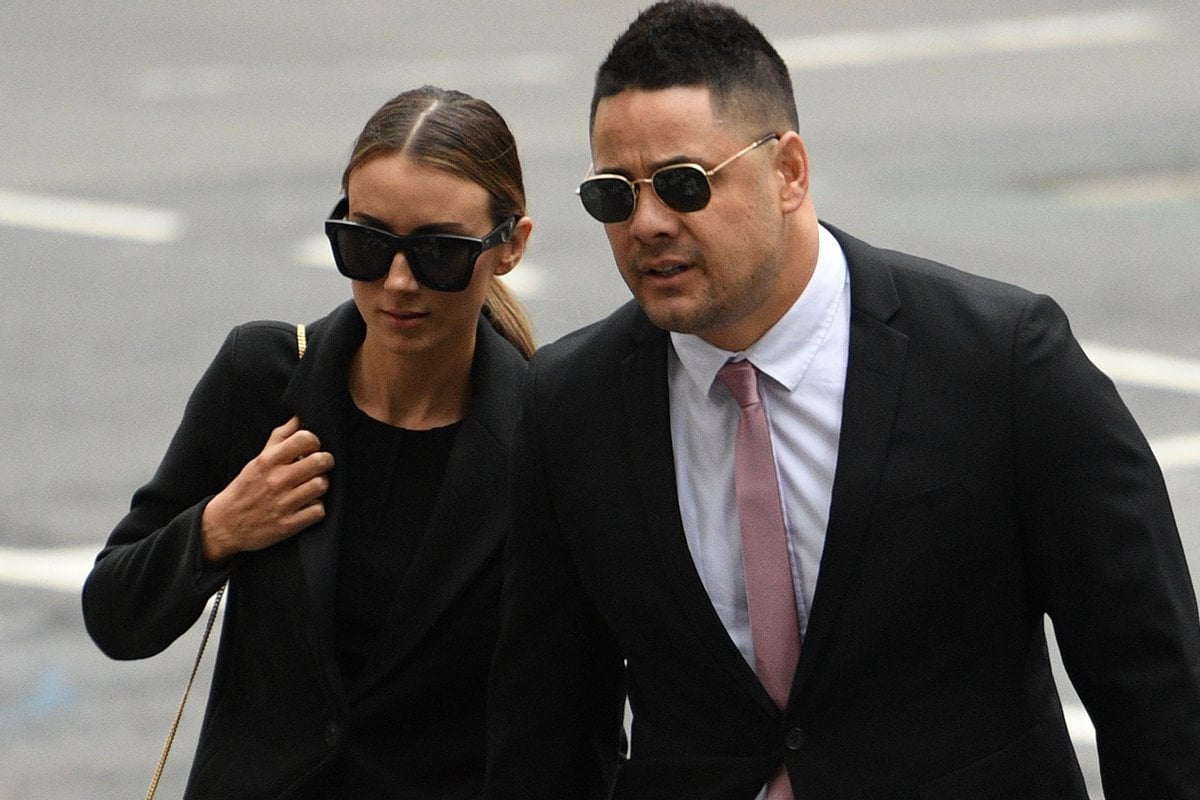 Jarryd Hayne has been sentenced to a maximum of five years and nine months in prison, with a non-parole period of three years and eight months, for sexually assaulting a woman in her Newcastle home in 2018.

The 33-year-old, who entered court on Thursday surrounded by a crowd of supporters, was found guilty in March of two counts of sexual assault. He was found not guilty of the two more serious charges of aggravated sexual assault without consent inflicting actual bodily harm.

"There is no other conclusion than he knew she did not consent," Judge Helen Syme said. "The offender... went ahead anyway and forced a sexual act on her."

Hayne has since lodged an appeal a day after being jailed.

During Hayne's sentencing on Thursday, the 28-year-old victim read out an emotional victim impact statement, saying Hayne had made her feel dirty and violated.

She said he had made her feel like an object and had been seeing right through her.

"You don't owe somebody your body, nor should they expect it," the woman said.

"My body remembers and my mind won't let me forget.

"This assault has changed me. It changed my direction and who I was.

"I don't remember the last time I had a proper sleep."

The woman said she had endured "countless hours of crying" and visited various psychologists to try to push the memory of what happened to the back of her mind.

The sentencing marked an extraordinary fall for a man once heralded as "the golden boy" of the NRL.

The 33-year-old is a State of Origin champion, a two-time Dally M Medallist – the highest individual accolade in the NRL – and now, a convicted sex offender.

On Thursday, photos of Hayne suited up and surrounded by a swarm of cameras were plastered across every media outlet in the wake of the news. It’s a far cry from the photos of him on the footy field, when he was known for his league creativity and not his crimes. 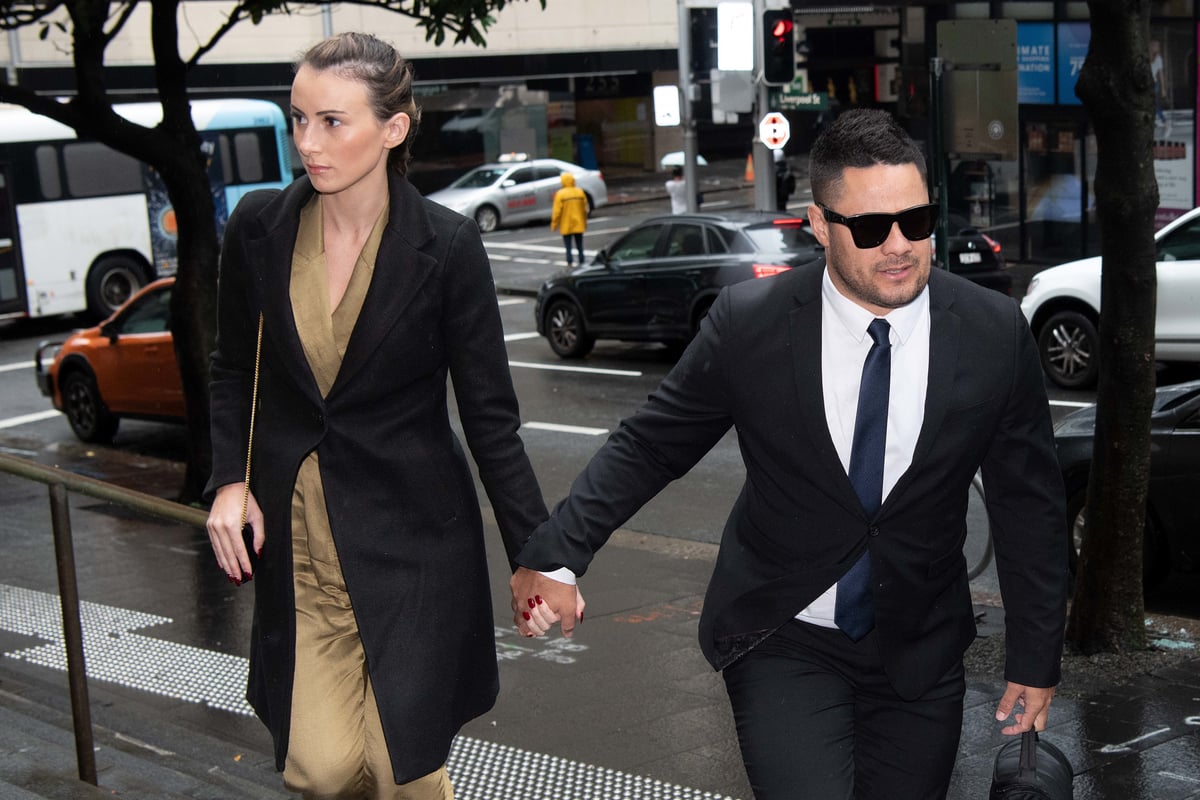 Jarryd Hayne and wife Amellia Bonnici arrive at the Downing Centre District Court, in Sydney, on Monday, March 22, 2021. Image: AAP. Hayne first debuted for the Parramatta Eels as an 18-year-old in 2006 and found nationwide fame in 2009 when he led Parramatta to their first premiership final since 1986. The Eels lost, but Hayne’s stardom soared.

He had come from humble beginnings. He grew up in housing commission in Sydney’s west with his two sisters and their single mother.

When he unexpectedly walked away from the sport in 2014, at the height of his career, he spoke of where he’d come from and what motivated him.

"I was probably about to become the highest paid player in rugby league but I’m a kid from Minto," Hayne said through tears.

"My whole dream of being a professional athlete was to buy my mum a house, and I did that."

Hayne left to pursue a career as an NFL player in the US for the San Francisco 49ers. 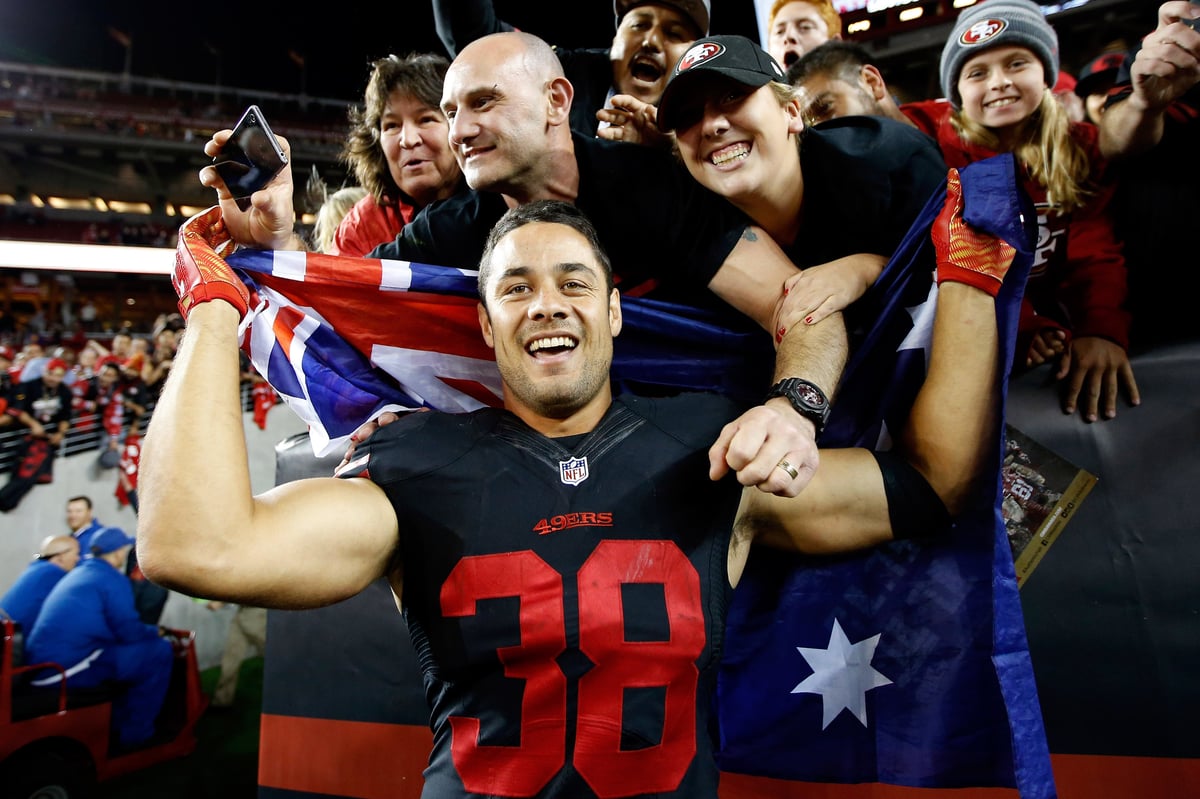 Jarryd Hayne playing in the US in 2015. Image: Getty.  It would be over there, in the US, that Hayne would first be accused of rape.

US court documents show that a woman, identified only as "MS V", accused Hayne of sexually assaulting her on December 21, 2015, after a 49ers game.

It’s understood the two met at a bar in California through mutual friends before they later shared an Uber to his apartment. The documents allege the woman was "heavily intoxicated" and had little recollection of arriving at his apartment.

Court documents allege she only remembers "seeing a silhouette of a man with [Hayne's] build coming towards her" before he "flipped her around... instructed 'no kissing' and shortly thereafter she felt extremely sharp pain in her vagina."

According to the documents, she experienced vaginal pain for months after the alleged rape and sought medical treatment for it.

She reported the alleged incident in 2016, but the case was dropped because of insufficient evidence.

The woman filed a civil rape lawsuit in December 2017, before the matter was resolved out of court for an undisclosed amount in August 2019 – five months before it was due to go to trial.

In 2016, Hayne announced his retirement from the NFL and made an unsuccessful attempt to join the Fiji rugby sevens team for 2016's Rio Olympics.

He returned to the NRL in Australia, firstly via the Gold Coast Titans and then back to Parramatta in 2018. Since then, Hayne hasn't played in the NRL. 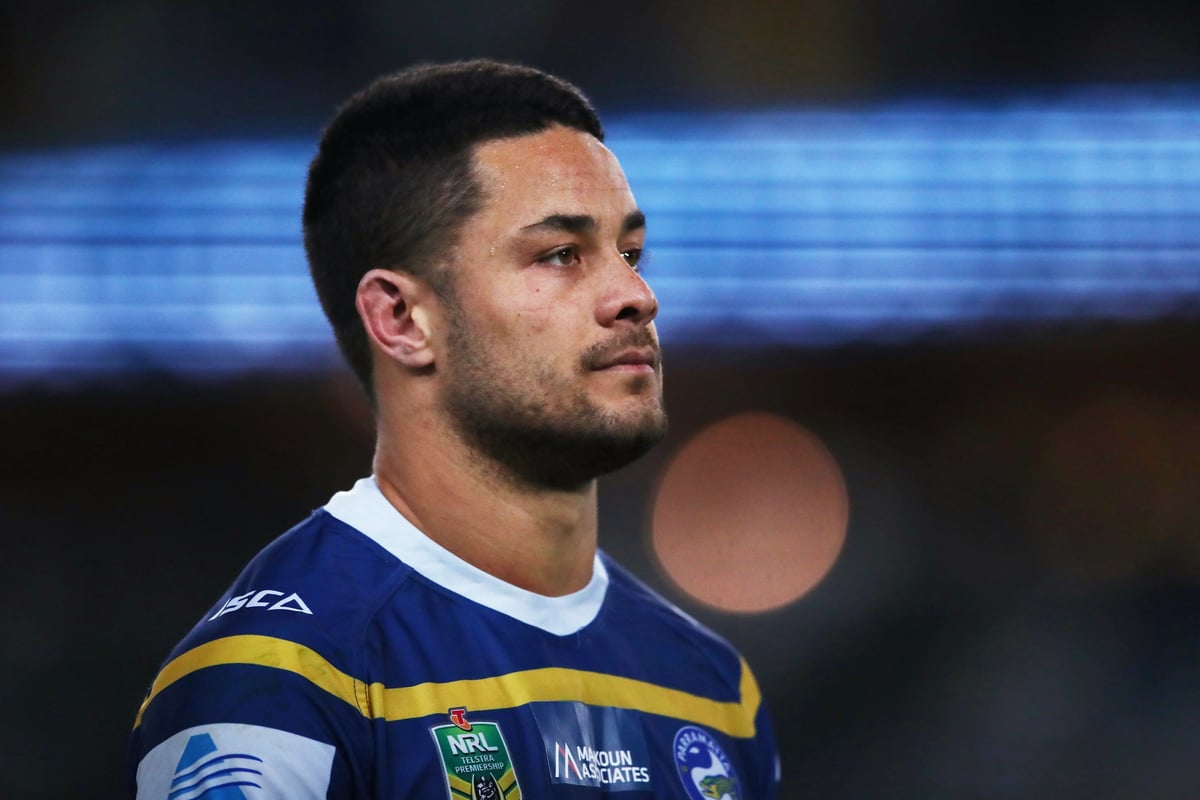 Jarryd Hayne returned to the Eels in 2018. Image: Getty.  Then, in November 2018, Hayne was charged with sexual assault once again. He pleaded not guilty.

The Crown argued the former State of Origin player felt entitled to sex when he went to a woman's Newcastle home on the night of the NRL grand final in 2018.

He had left his friends at a buck's party and negotiated a $550 taxi fare to Sydney, but asked the driver to stop at the woman’s house on the way.

The court heard the pair were in the woman’s bedroom, singing along to music videos, before the woman learned a taxi was waiting outside waiting for his departure.

Upon the realisation, the woman made a "conscious and definitive decision" to not consent to sexual activity with Hayne.

"I knew she didn’t want to have sex," Hayne admitted in court. "I thought I would just please her." 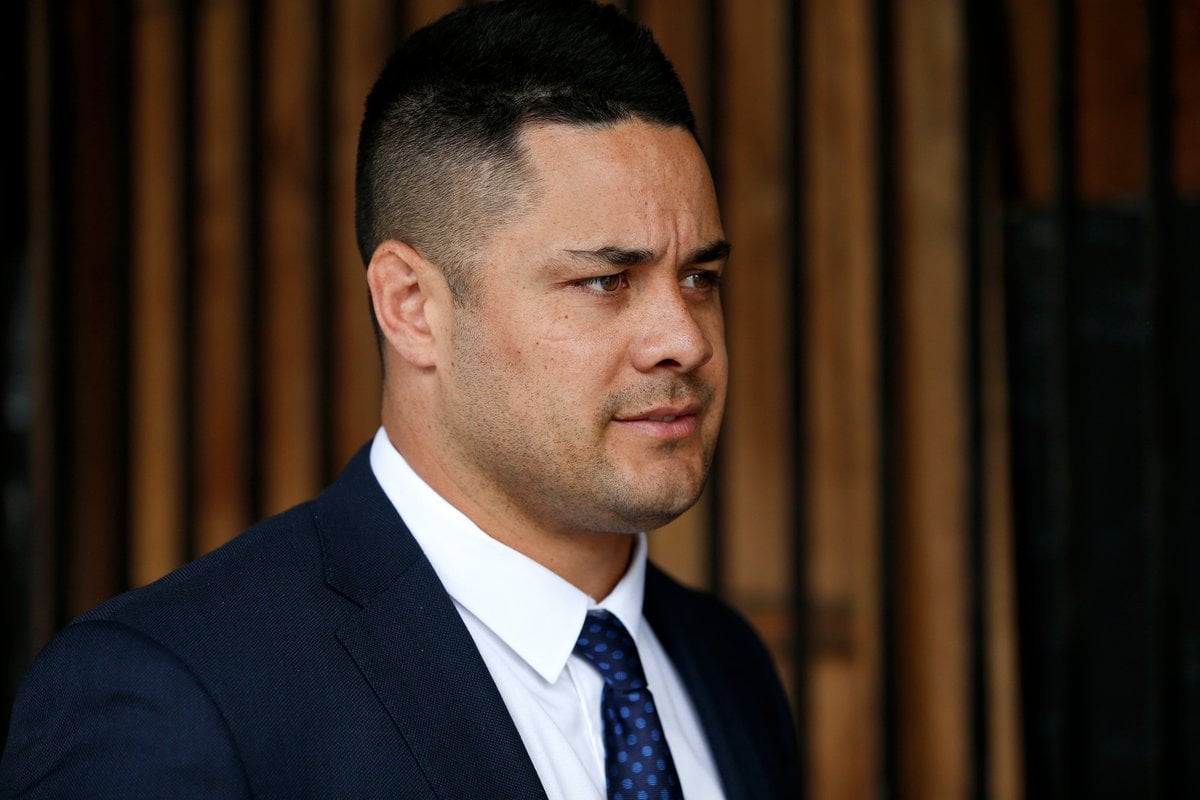 Jarryd Hayne has been found guilty of sexual assault. Image: Getty. The woman alleged Hayne pushed her face into the pillow before ripping her jeans off.

She testified Hayne was "rough, forceful and inconsiderate," despite her protests of "no" and "no Jarryd".

Hayne denied assaulting the woman, saying he "unequivocally" believed the incident was consensual.

The first trial resulted in a hung jury in December 2020, after the jury of eight men and four women were unable to reach a unanimous verdict.

Then, in March, the retrial concluded with a jury of seven men and five women finding Hayne guilty of two counts of sexual intercourse without consent.

As the victim-survivor delivered her victim impact statement inside the Newcastle District Court, Hayne's wife, Amellia Bonnici, was among his supporters.

Hayne and Bonnici first met in 2016, after Hayne returned to the NRL after his stint in the NFL.