St George Illawarra player George Burgess will plead not guilty to sexually touching a woman without consent, a Sydney court has been told.

The NRL forward's lawyer Bryan Wrench told the Downing Centre Local Court on Wednesday that his client intended to plead not guilty to the charge.

"There is a significant dispute about what happened on this occasion," Wrench said. "We need the evidence."

Registrar Nicole Hoffmann said a plea would need to be formally entered for evidence to be produced.

Burgess was arrested and charged following a complaint made by a woman who says it occurred on March 8. The 29-year-old allegedly sexually touched the woman on the bottom without consent between 10.20am and 10.45am in Mascot, according to court documents. The North Wollongong resident knows the complainant, police said in an earlier statement.

The NRL is waiting for more information from NSW police before making a decision on the immediate future of Burgess in rugby league. Under NRL rules, players who are charged with an offence that carries a jail term of more than 11 years are automatically stood down from the competition. Burgess' charge does not fit that threshold.

His case will return to court at a later date. 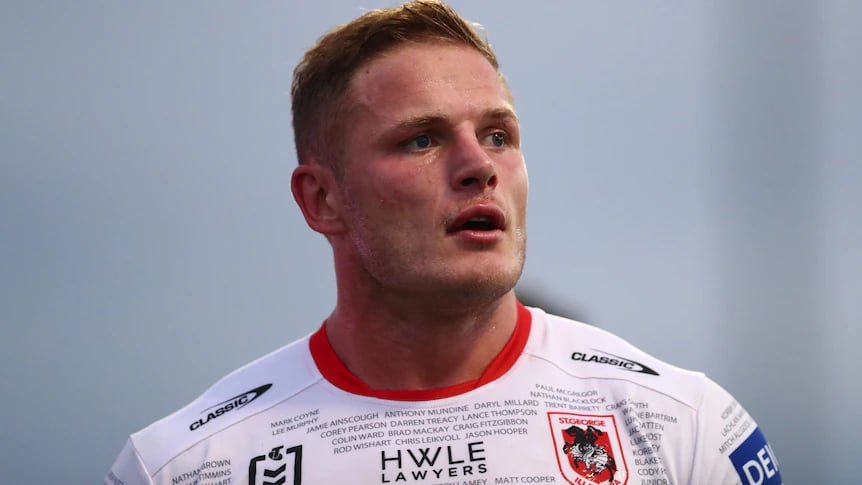 A grim discovery in Sydney: Your evening headlines for April 13th.

Do you find the news cycle overwhelming? Depressing? Confusing? Boring? Endless? Then you need The Quicky - Mamamia's daily podcast that gets you up to speed on the top stories. You can listen to all tonight’s news headlines now.

Rihanna, Vogue and the problem with singular body worship.

The first trailer and the release date for the highly anticipated new series Conversations With Friends were released today, giving us our first look at the show adapted from the bestselling book by author Sally Rooney.

And Jennifer Lopez has released more details about her engagement to Ben Affleck, sharing a very intimate story about a bubble bath. It’s all meant to be very romantic, but it turns out she’s actually doing damage control.

Plus, Rihanna is Vogue’s May cover star, appearing on a breathtakingly beautiful cover and giving a very rare interview about her life, her romance with A$AP Rocky and her pregnancy. The cover is meant to be groundbreaking, but all it really does is highlight the problem with singular body worship in the entertainment world.

The pop culture stories you missed.

Earlier in April, popstar Camila Cabello shared a lengthy essay on Instagram about all the stress she went through during a beach day, knowing that paparazzi would hide nearby hoping to get a photo of her in an unflattering position.

It was a candid and in-depth look behind the impact of paparazzi 'beach photo' culture, which you would be forgiven for thinking was a thing left in the 2010s.

Mamamia's entertainment editor Laura Brodnik put together this really comprehensive explainer on this gross part of celebrity, mapping the history from the 'best and worst beach bodies' pages of magazines to now and explaining how damaging it is - not just for the celebrities at the centre of it, but for all of us.

Give it a read, it's brilliant: The ugly truth behind the history of 'worst beach bodies' and the scandals that followed.

If you're after something light and fluffy, check out this look back at celeb couples who eloped: 'I was too scared to have a huge wedding': 8 celebrities who decided to elope.

Someone needs to commission a rom-com based on Jack Black's real-life relationship, stat.

Easter travel chaos, and all the news you need to know this morning.

A question for your Wednesday morning - do you and your partner ever have the same fight over and over again?

Well, it's a lot more common than you think.

My colleague Isabella Ross spoke to a relationship expert and 25 couples about the 'one fight' they keep having. You can read all about it, here.

But first, let's get you across the biggest news stories you need to know today, Wednesday April 13.

1. Travel chaos worsens as we edge towards Easter.

We're still days away from the Easter long weekend, but Sydney, Brisbane and Melbourne airports are overflowing with holidaymakers, as school holiday travel plans are thrown into disarray.

The Today Show reports Qantas has taken the drastic measure of calling in senior managers to unload bags amid huge queues and critical staff shortages due to COVID.

Qantas has taken the drastic measure of calling in senior managers to unload bags amid continuing airport chaos. #9Today pic.twitter.com/JCFidvWNF3

Before dawn at Sydney airport this morning, queues were already out the door. This has been the case for the past week, with authorities warning domestic customers to arrive two hours before their flights in both Sydney and Melbourne to ensure they catch their plane in time.

International customers are advised to get to the airport three hours before.

Prime Minister Scott Morrison has been confronted by an angry activist at a private function for journalists covering his election campaign.

Adisen Wright, who describes himself on social media as a "progressive activist" and is listed online as a Young Labor member, filmed himself as he approached Morrison at Western Sydney's Nepean Rowing Club last night.

In a video shared on TikTok, Morrison asks Wright whether he is with the "press pack", to which he responds: "No, I am a local, I live up in the [Blue] mountains".

Morrison then sees the camera and says: "What's going on there? Why is it recording?" and tells Wright it is a private event.

"Scomo, across the river here, across the Nepean River, people lost their houses and they were burned. You're a disgrace - you are a disgrace," Wright yells before a security officer follows him outside and asks for identification.

WATCH: A Labor activist has ambushed the Prime Minister at a private election campaign event in Western Sydney, calling him a "disgrace". #9Today pic.twitter.com/NLx75X6rAO

Police confirmed they were called to a licensed premises at Penrith about 7.30pm when they issued a 20-year-old man with a direction to move on.

"He left the venue without incident," a spokeswoman told AAP.

3. Labor to announce $135m for health clinics as Greens pledge $77b for dental.

Labor will continue to focus on health in a bid to grab Liberal-held marginal seats as Anthony Albanese enters his third day on the election campaign.

Albanese will be in Melbourne this morning to announce a trial of 50 urgent care clinics across the country, which will offer an alternative to busy hospital emergency departments for families.

The Greens are also pushing for better healthcare, with leader Adam Bandt saying more than $77 billion worth of dental care will be covered by Medicare if the Greens hold the balance of power after the election.

Last time @Greens were in balance of power, we got dental into Medicare for kids.

This time we’ll get it for adults too.

"In balance of power, the Greens will tackle the cost of living by getting dental and mental health into Medicare, fixing the housing affordability crisis and wiping student debt," Bandt said.

Scott Morrison is expected to start the day in western Sydney, before flying interstate to spruik $125 million grants to be matched by refineries in Brisbane and Victoria to begin major construction to upgrade facilities to supply better quality fuels.

Russian President Vladimir Putin, who largely vanished from public view since his forces were driven from the approaches to Kyiv this month, has resurfaced to defend his "noble" invasion of Ukraine.

In a press event yesterday, Putin said Moscow had "no choice" but to intervene to protect separatists, defeat neo-Nazis and "help people".

Russia's economy was standing on its feet despite Western sanctions, he added, and signs of war crimes allegedly carried out by Russian troops were fakes staged by the West.

As for peace talks: "We have again returned to a dead-end situation for us," said Putin.

President Putin has pledged Russia would triumph in all of its “noble” war aims in Ukraine https://t.co/DtrId1Ydz7 pic.twitter.com/No3M720Ync

It was only his second public appearance in a week, following a brief appearance at the funeral of a nationalist politician where he said nothing directly about the war.

Asked if the operation in Ukraine would achieve its goals, Putin said: "Absolutely. I don't have any doubt at all... Its goals are absolutely clear and noble."

5. Ten shot on NYC subway as gunman at large.

Ten people have been shot and a total of 16 injured after a masked gunman set off a smoke bomb and opened fire in a New York City subway car.

The perpetrator is still at large, and the incident is not currently being investigated as an act of terrorism, New York Police Commissioner Keechant Sewell said, but would not rule out anything as a motive.

"This morning, as a Manhattan-bound N train waited to enter the 36th station, an individual on that train donned what appeared to be a gas mask, he then took a canister out of his bag and opened it," Sewell told a press conference.

"The train at that time began to fill with smoke. He then opened fire, striking multiple people on the subway and in the platform," Sewell added.

Video shows smoke billowed out as the train car pulled into the 36th Street station. Riders trapped inside poured out, some collapsing to the ground. Images showed streaks of blood on the platform.

In recent months New York has experienced a rise in gun violence in general and a spate of attacks in the city's transit system, one of the world's oldest and most extensive.

You're all up to speed. We'll be back to bring you more of the biggest news stories throughout the day.

The illegal drug often referred to as 'ice', but also 'meth' or 'crystal meth' is the most commonly used illicit drug in Australia, and people living in regional areas are more likely than those in cities to be addicted to it.

But despite the devastating impact it has on users, not everyone who is hooked on ice looks like the stereotype of a drug addict.

From the outside, Andrea had it all; a millionaire lifestyle and wonderful children.

The Quicky speaks to Andrea about how she became hooked on ice, how she managed to get off it, and what she wants you to know if you've ever been tempted to give it a try.