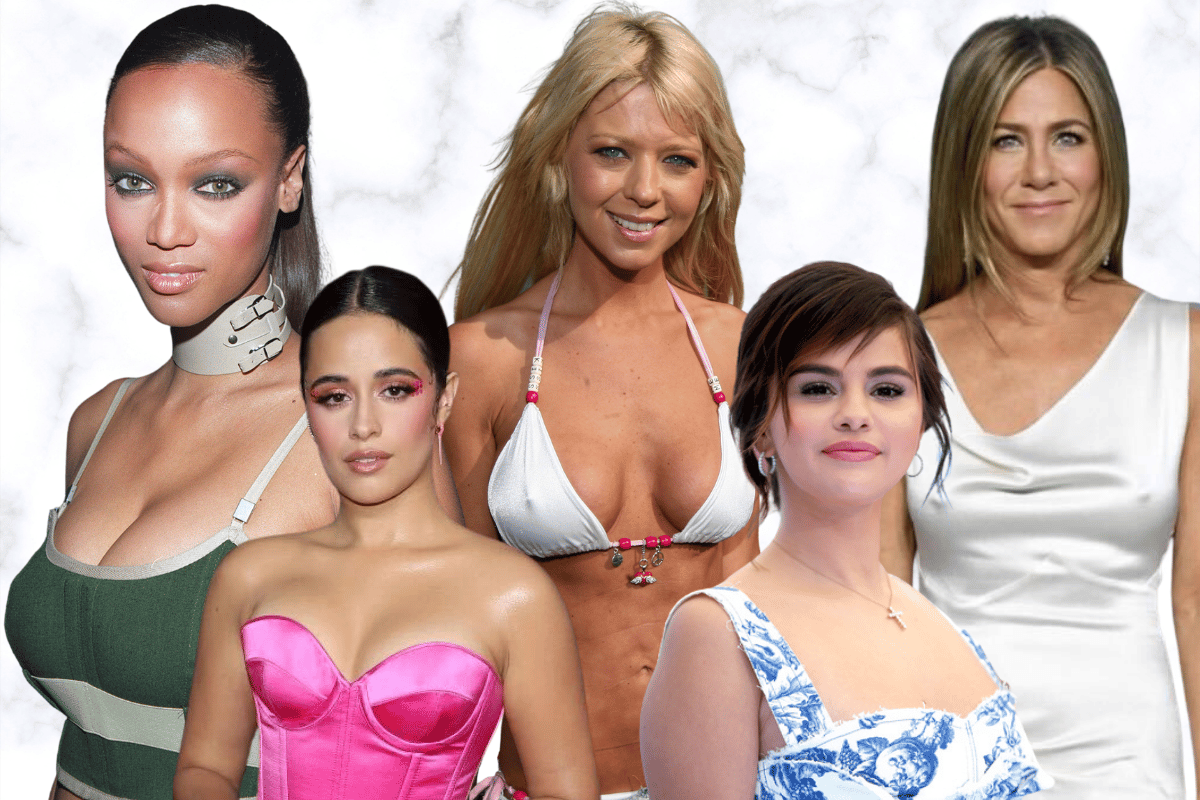 Once upon a time, there was one ugly configuration of words and images that could be slapped across every tabloid and spun into guaranteed sales.

Images of women with some sort of celebrity status at beaches, all clad in swimwear.

A seemingly non-newsworthy event until you factor in the way the images were hunted down by paparazzi and then ruthlessly split into two camps across a series of glossy pages that were then viewed by the masses.

The 'best beach bodies' list included women who had the coveted 'golden glow' and conventionally attractive bodies, (the only kind that were allowed on movie screens at the time) featuring thin frames and uniform flat stomachs.

While the 'worst beach bodies', the real money maker behind the whole scheme, consisted of women who were not a size zero and who dared to show any hint of cellulite, stretch marks, or have the audacity to possess a non-flat stomach as they walked along the water.

For decades it was a media fixture so steeped in our culture, along with 'worst dressed lists', that you wouldn't bat an eye if the three magazines included in your weekly shop were all dedicated to ripping apart women's bodies via photos taken without their consent.

Over time, a shift in our media consumption meant that many publications had to quietly kill off the previously lucrative 'worst beach bodies' content.

But while the title might have died off, the practice itself is still alive and well.

Listen to the hosts of The Spill break down the latest paparazzi scandal.

Nowadays you'll find this type of content splashed across sites like the Daily Mail, where often (deliberately unflattering and intrusive) images of women in swimsuits at the beach are run with captions that describe them as 'frolicking' and 'flaunting their curves and ample assets'.

All designed to invite negative comments about their bodies.

The 'worst beach bodies' tagline might not be in play anymore, but women with public profiles and famous names are still living under the threat of having their swimsuit photos run through the ruthless tabloid machine, and in many cases have to plan their lives around it.

This fact was highlighted by Grammy nominee Camila Cabello in a recent viral Instagram post where she explained the toll beach paparazzi culture takes on women who are hunted down by the cameras.

"Every time I go to this beach club in Miami I get papped," she wrote. "Somehow, when I check-in, paps know and get me in my bikini. Every time I’ve felt super vulnerable and unprepared.

"Today I got a new bikini, a whole f**kin’ cute outfit, put lip gloss on, and didn’t eat anything too heavy before going in the OCEAN cause I knew it was gonna be basically a whole photoshoot.

"I held my core so tight my abs hurt, didn’t breathe and barely smiled. I was so self-conscious of where the paps were the whole time," she continued. "I ran away to the pool area where hopefully they can’t get me but they literally hide in the bushes sometimes. I’m exhausted.”

In a recent interview with Nova’s Smallzy’s Surgery Camila elaborated on the continued rise of paparazzi beach culture, saying it had even pushed her to seek professional help.

"When I started going to the beach, there were a million, paparazzi there," she said. "I saw the pictures the day after. I don't ever look at what people say about me on purpose, but sometimes I just stumble upon it.

"And then I have to book a therapy session and talk about it, because I feel so insecure. We live in such an exhausting time because there are pictures everywhere. You can't just go to the beach and be present."

The ugly reason why beach paparazzi culture differs from traditional paparazzi practices, which are also intrusive and dangerous, is that they are focused on a 'gotcha' moment hooked on women's bodies.

Unless you're Taylor Swift and Tom Hiddleston canoodling on a beach (in a potentially set up PR shot) beach paparazzi photos are unlikely to break personal celebrity stories, capture their reactions to recent scandals or uncover any tidbits about their lives.

Instead, the aim is to capture them in unflattering angles, a way to peel away the perceived safety nets afforded by magazine covers, film roles, and their own social media accounts.

And the worse the pictures are, the more traction they gain.

Selena Gomez was infamously papped in a swimsuit in Mexico, and the photos made headlines due to her body looking different than it had in previous images.

She was then forced to explain that her ongoing health struggles had led to a difference in her body and that seeing the photos of herself being torn apart online pushed her into therapy.

"This was the first year I ever dealt with anyone talking about my body", she told Us Weekly. "I'd land at the airport and people would yell out, 'You're fat!'

"It was awful". I've been working on it in therapy."

Actress Tara Reid has been open about the fact that she underwent a liposuction procedure in 2004 that went wrong, leaving scaring on her stomach.

However, it wasn't a story she was quite ready to share, until photos of her in a bikini became a tabloid sensation with outlets rushing to publish images of her scares.

"You know, it wasn’t really the pictures that hurt me. The comments hurt me," she has since said of the many paparazzi images of her at the beach that have surfaced online.

"People wrote, ‘Look at that flabby old actress, she used to be so hot. She’s gross" she told People when commenting on the reaction to her body. "I've been a media target for years now." 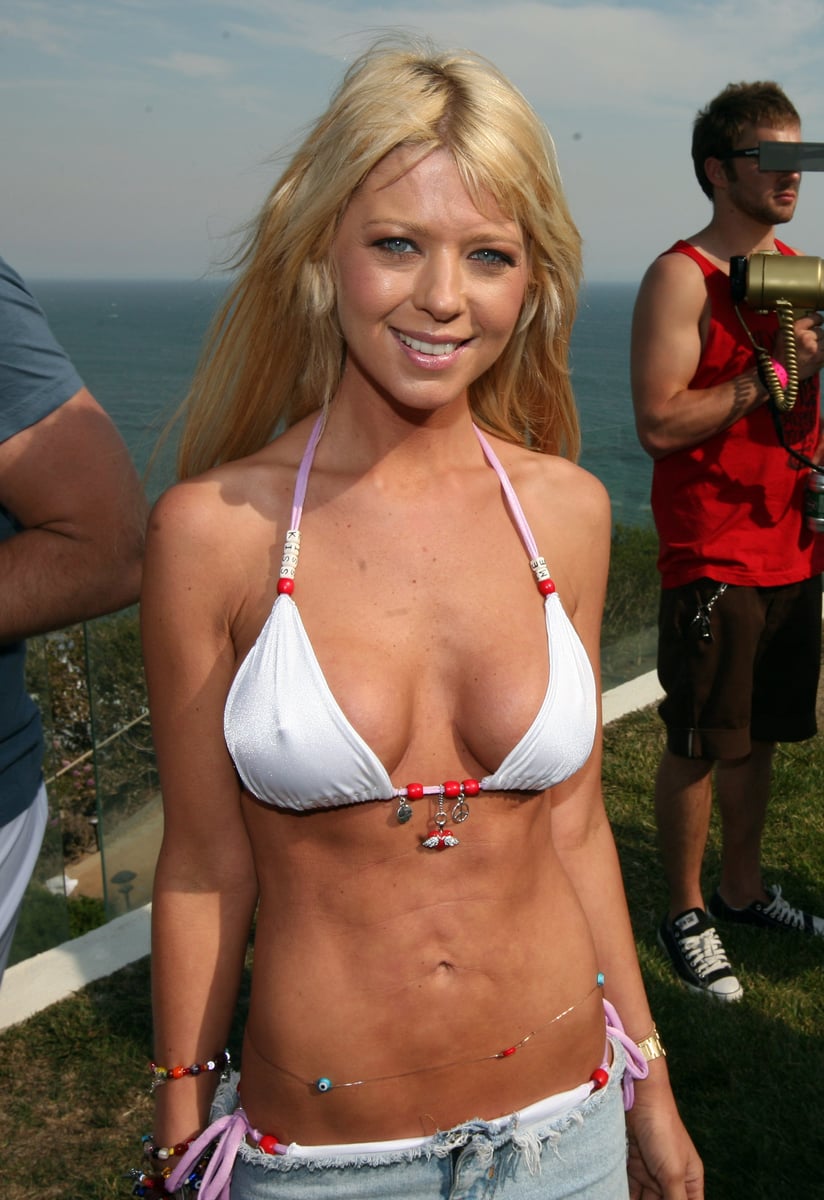 Tara Reid has been open about the fact that she underwent a liposuction procedure in 2004 that went wrong and the media scrutiny around it has been difficult to face. Image: Getty.

In 2007 model, TV host, and the force behind America's Next Top Model Tyra Banks was papped at the beach wearing a one-piece swimsuit.

The photos were then splashed across the covers of numerous tabloids, with headlines such as "Thigh-ra Banks," "America's Next Top Waddle" and "Tyra Porkchops" all designed to shame her appearance.

In the next episode of her talk show, The Tyra Banks Show, the model marched onto the stage wearing the same swimsuit that was being shamed across multiple magazine covers, looked straight into the camera, and delivered her response.

"If I had lower self-esteem, I would probably be starving myself right now," she said. "And that is exactly what is happening to other women in this country. 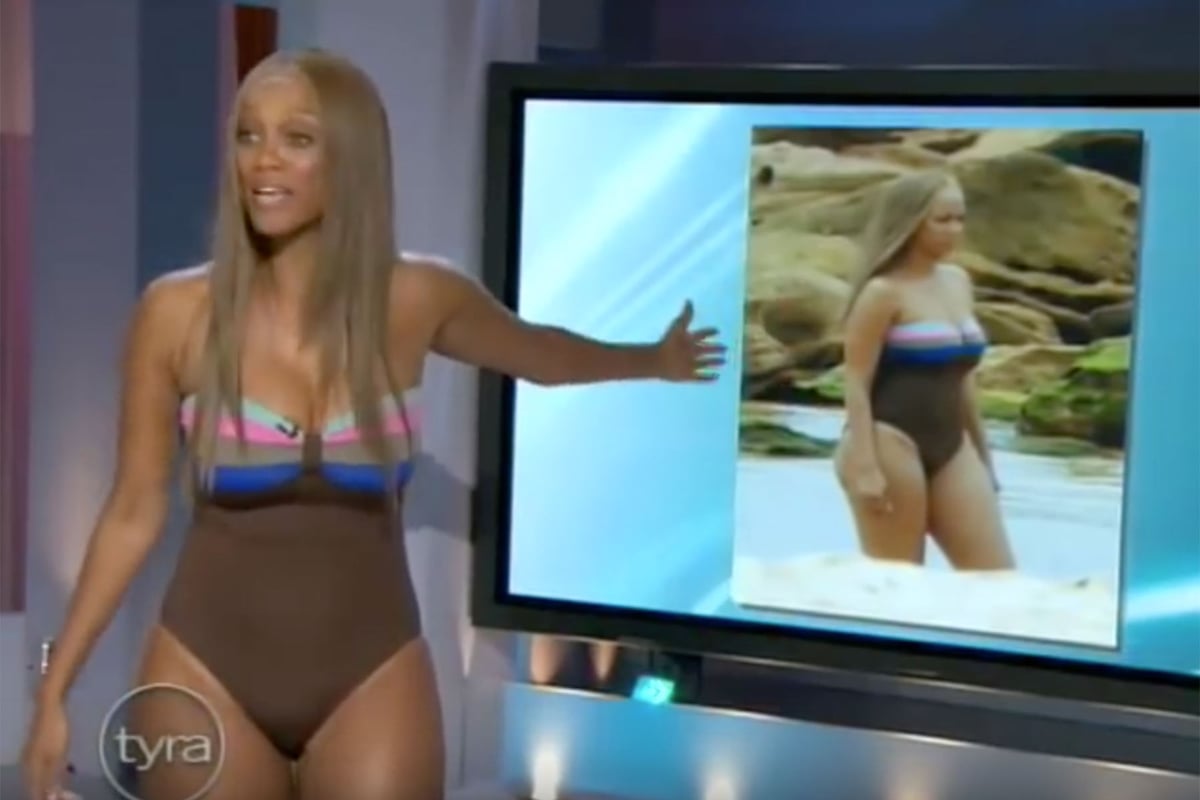 Tyra Banks was papped at the beach wearing a one-piece swimsuit, she told the magazines that published the pictures to "kiss my fat ass". Image: The Tyra Banks Show

In a similar vein, for decades Jennifer Aniston has been trailed by photographers down the beaches, all hoping to procure any kind of image that could make it look like she was 'sporting a baby bump."

A headline and photo combination that is still selling to this day.

In response, Jennifer wrote an eloquent essay for The Huffington Post titled For The Record to defend women who've experienced a similar type of shaming around their bodies.

"For the record, I am not pregnant," she wrote. "What I am is fed up. I'm fed up with the sport-like scrutiny and body shaming that occurs daily under the guise of 'journalism,' the 'First Amendment' and 'celebrity news."

"I resent being made to feel 'less than' because my body is changing and/or I had a burger for lunch and was photographed from a weird angle and therefore deemed one of two things: 'pregnant' or 'fat'.

"Not to mention the painful awkwardness that comes with being congratulated by friends, coworkers and strangers alike on one’s fictional pregnancy (often a dozen times in a single day).

"From years of experience, I’ve learned tabloid practices, however dangerous, will not change." 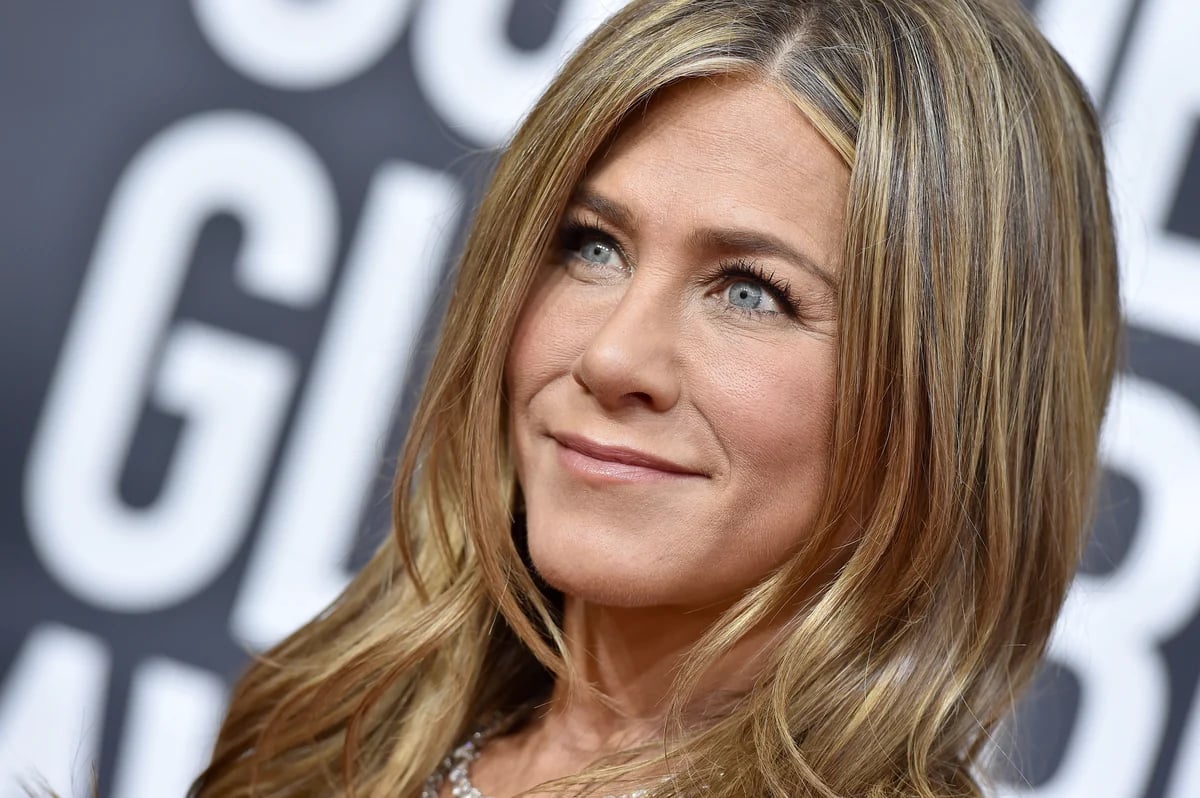 "I'm fed up with the sport-like scrutiny and body shaming that occurs daily under the guise of 'journalism'," said Jennifer Aniston. Image: Getty.

As recent as last year, The National Enquirer’s '50 best and worst beach bodies' was published, complete with a social media campaign, to remind us that paparazzi beach culture is alive and well.

And people are ready and willing to pay for it.

The feature included images of Katie Holmes, with a critique of her body reading "she has a few things to iron out including her midsection."

Goldie Hawn was accused of "bingeing on fine food and booze" and then "parading her flabby tummy and lumpy thighs". While model Janice Dickinson was accused of exposing "loads of wrinkly skin! The puckered epidemis of her belly, arms and legs looks like it was plucked from a chicken.'

Model and author Tess Holliday was also included in the feature, along with a horrific caption that read "Thar she blows! Tess Holliday, 36, doesn’t shy away from having a whale of a time at the beach. But Dr Stuart Fischer believes the model is clocking in at 305 pounds!"

This may seem like an issue reserved for women of celebrity stature, but the harsh reality is these photos and this language is all designed to perpetuate body shaming within everyday culture.

We might not all be getting papped at the beach, but these words can still sting all the same.

If you need help, please contact the Butterfly Foundation‘s National Support line and online service on 1800 ED HOPE (1800 33 4673) or email [email protected] You can also visit their website, here.

Reply
Upvote
This toxic media culture of body shaming famous women has been literally going on for decades. It's almost like a mass hatred of famous women. Like she said, it does seem like Jennifer Aniston is one of the most frequent victims of journalistic criticism. How many times have they speculated that a tiny rounding of her tummy must be a so called baby bump. They still do it now that she's in her 50's. It's like they're punishing female celebrities for daring to be human like the rest of us. I remember, when she was alive, how ruthless and vindictive the media was in it's criticism of her. I even remember a close up photo in a magazine, of her supposedly wrinkly knees, of all things. Of course, now that she's dead, she is placed upon an unrealistic pedestal, equal in some ways to Mother Mary. It's now well overdue for a complete turnaround in how women, famous or not, are portrayed in mainstream media. If this involves sacking all the staff, and hiring more enlightened ones, so be it. We are more than just our bodies.
A
alessandra.z87 a month ago