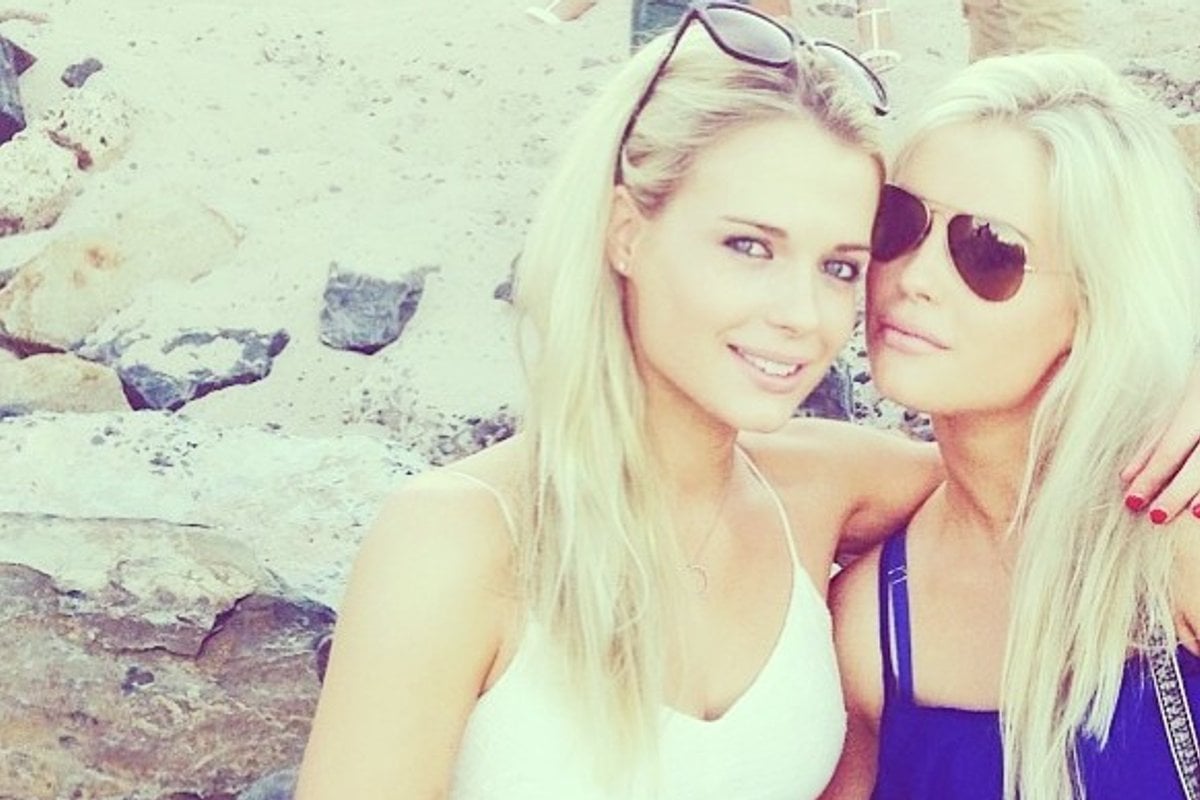 Princess Diana was the most photographed woman in the world, but the Spencer family have mostly avoided the same spotlight.

While much is known of Diana's marriage to Prince Charles, their children Prince William and Prince Harry, and her complex relationship with the royal family, the Spencer family - wealthy aristocrats who had been close allies to the royals for generations - is also complicated.

Since her death in 1997, Diana's brother Charles, Earl Spencer, her sisters Sarah and Jane, and her nieces and nephews, have mostly lived lives without the invasive camera lenses and tabloid stories that detailed her every move.

In fact, Diana's brother and his then-wife Victoria Aitken moved their family to South Africa in 1995 to avoid the media.

Watch: The achievements and inspiration of Princess Di. Post continues below video.

For Earl Spencer, it didn't always work, but his children were mostly shielded from the notoriety of the Spencer name in the UK.

But in a rare media appearance, his twin daughters (Diana's nieces) Amelia and Eliza Spencer have posed for the cover of British society magazine Tatler.

The pair spent their early years in Althorp, the Spencer family home, before moving to South Africa with their parents.

Their parents' divorce was already in progress by 1997, when Princess Diana died in a Paris car accident.

Following her death, their father returned to the UK while Amelia, Eliza, their mother and two other siblings - older sister Kitty and younger brother Louis - remained in Cape Town.

Living in South Africa meant the twins weren't aware of how well known their aunt was.

"We always just knew her as our aunt. Growing up in South Africa, I really had very little idea of how significant she was in the world until I was much older," Eliza told Tatler, saying she remembers Diana as "incredibly warm, maternal and loving".

"She always made an effort to connect with us as children and had a talent for reading children's hearts."

Both sisters are now preparing to move full time to the UK, presumably with their partners. Eliza has been dating Channing Millerd for five years, and Amelia is engaged to her partner of 11 years, Greg Mallett.

Their older sister Kitty is a model already living and working in the English capital.

Kitty felt the brunt of fame overnight after appearing at the wedding of her cousin Prince Harry and Meghan Markle. Dressed in green, the headlines came thick and fast:

"Who is Kitty Spencer?"

"Everything we know about Kitty Spencer."

"Kitty Spencer is the spitting image of her aunt, Princess Diana." 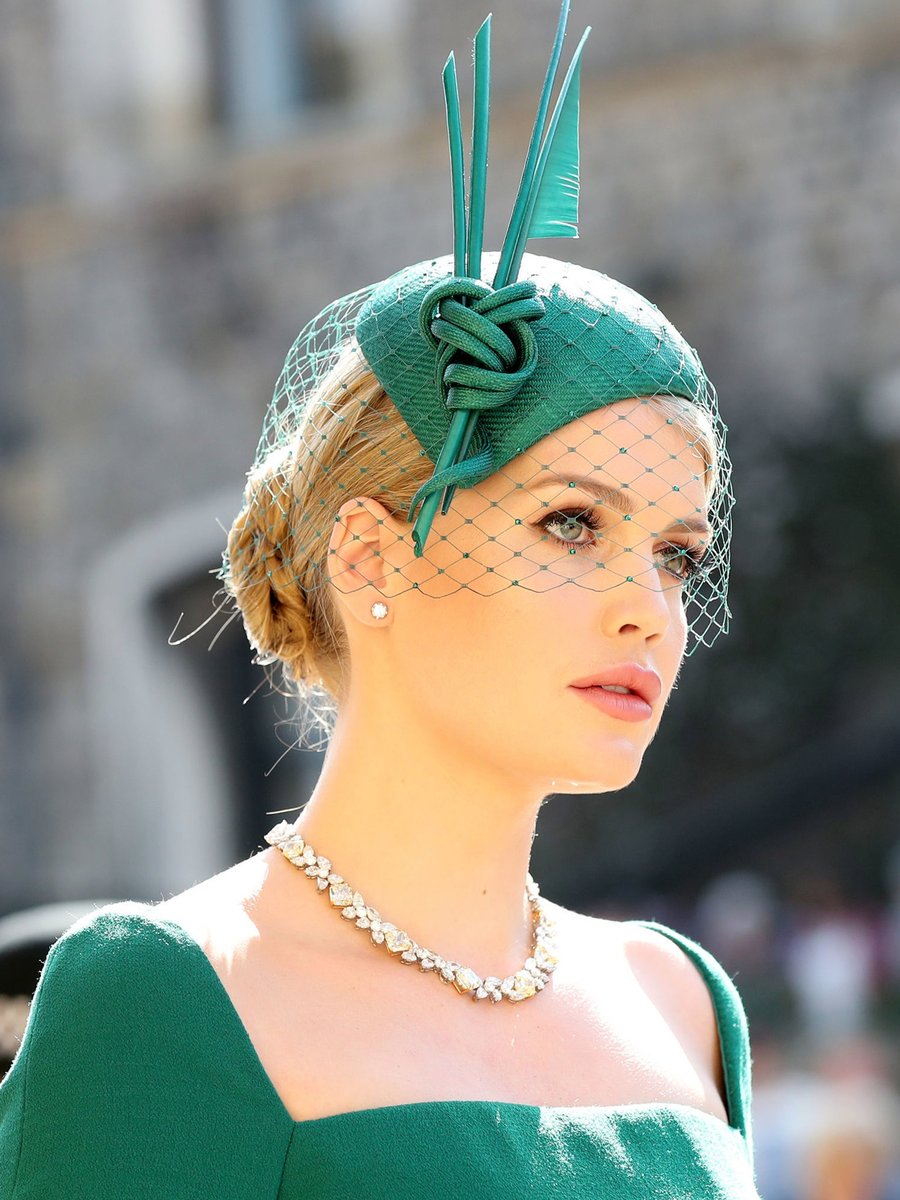 She told Harper's Bazaar she went from 17,000 to half a million Instagram followers overnight, and it was "definitely unexpected".

"[My Instagram followers] went from 17,000 to half a million in one night. I thought I had someone else's phone when I woke up the next morning. I had to turn my notifications off because my phone was going to die," she said.

But even with her new higher profile, Kitty keeps a lot of her private life off social media. Her feed is mostly images from her modelling career and work with youth homelessness charity Centrepoint.

Although Kitty now graces covers of magazines, her childhood a world away from the British press helped her appreciate the importance of holding onto her privacy.

She is supposedly engaged to 61-year-old millionaire Michael Lewis, chairman of fashion retail company, Foschini Group, although neither have ever confirmed it.

"There are not many places in the world where you can actually have something that's so free, just natural and relaxed. I was lucky to have a childhood there."

The Spencer siblings appear to be extremely close, regularly sharing photos of them all together now and during their childhoods. 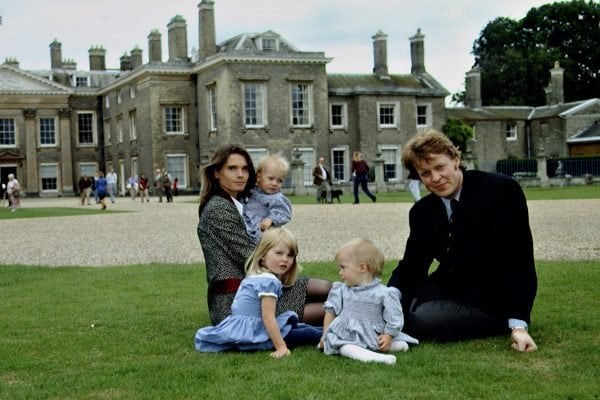 Earl Spencer and his then-wife Victoria with sisters Kitty, Amelia and Eliza Spencer at Althorpe house in 1993. Image: Getty.

And despite growing up in a different country, they have remained close with their father and wider royal family, attending both Prince William and Prince Harry's weddings.

A 2010 article from the Daily Mail laid bare private details of the Earl's marriages and divorces, to his displeasure.

He had long had a complicated relationship with the press. He'd spoken at his sister's funeral of the "anguish" and "tearful despair" caused by the media's constant pursuit of her, and was displeased when the details of his first divorce became tabloid fodder.

Of particular interest to the press was how, although his family moved to Cape Town to avoid publicity, it also happened to be the home of former model Chantal Collopy whom the Earl had a two-year affair with.

Stories were circulated so regularly they read like urban legend:

His wife Victoria had struggled with addiction issues and anorexia during their marriage. After completing a five-month stint in a clinic, she said her husband picked her up and taunted her with the tales of his affairs.

And at a party, when he was reminded of his late father's remark that he should stick with Victoria through 'thick and thin', Spencer famously joked to guests that Victoria was "thin, and certainly thick".

They divorced after the birth of son Louis, who conveniently provided him with an heir to the Earl title and the family's estate. 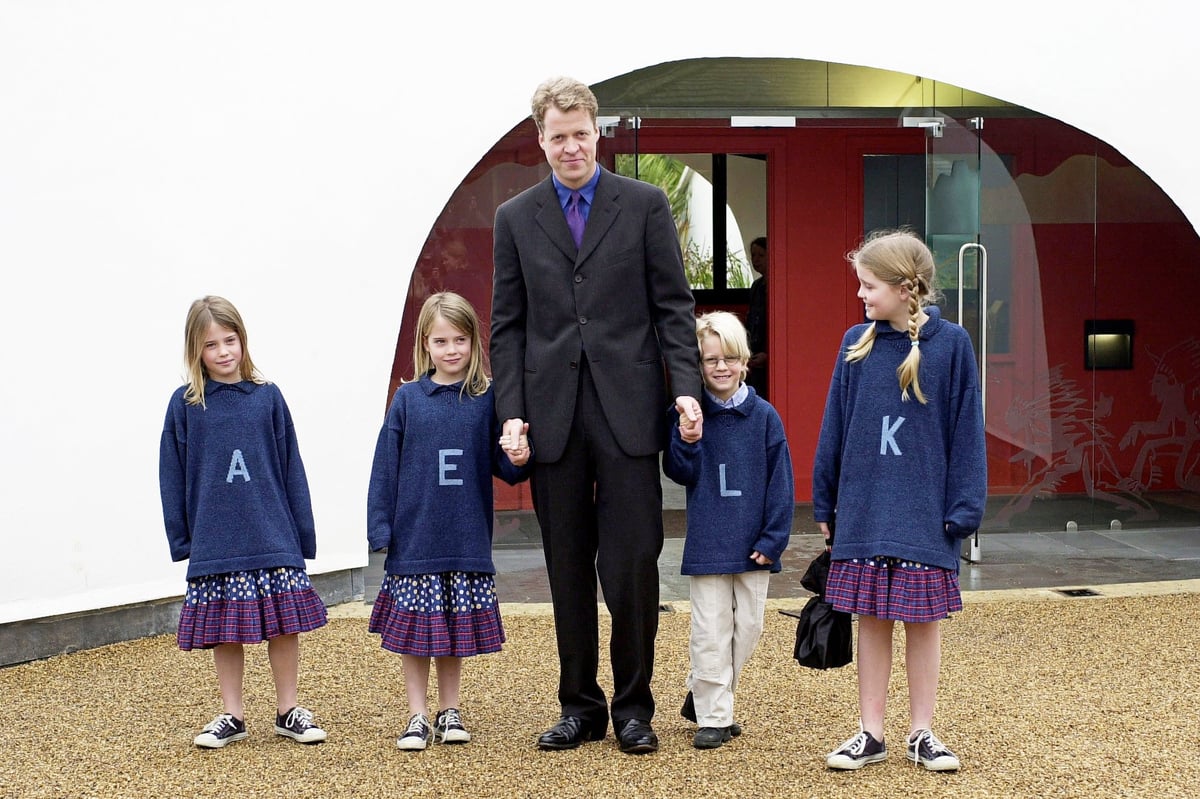 Diana's brother has an estimated net worth of AU$180 million, but the Daily Mail claimed he was irritated by the amount of money he was ordered to provide to his children with Caroline, Edmund and Lara (which was reportedly about AU$54,000 per year, each).

He left his second marriage to pursue an American TV reporter who had been sent to interview him. After 18 months, they broke up.

In 2001, Spencer married Karen Gordon, a Canadian philanthropist, the founder and chief executive of Whole Child International, a charity based in Los Angeles that works to improve the lot of orphaned, abandoned, or abused children.

"We hadn't settled on a first name before the birth, but Charlotte is a name we both love, and it really suits her. We knew that as soon as we saw her. And though it's been 15 years since Diana died, I still miss her every day and I wanted her commemorated in the naming of our daughter," he told the Telegraph.

The Earl, Gordon and Lady Charlotte live on the family's Althorp estate, which many soon see a major family reunion for Amelia's wedding.

"It's our family home, it's beautiful. We would be very lucky to get married there, but Cape Town is where we grew up and there is a possibility that we might do it here, too," she told Tatler.

Wherever it is, there is bound to be much media interest - whether it's desired or not.

Reply
Upvote
I try not to pre-judge people by the way they look, but if anyone ever lived up to the smirky douchebag written all over their face, it seems to be Earl Spencer.
Mind you, being referred to as 'Earl', and not actually being a truck driver bulging all the wrong places out of a wife beater, couldn't have been be an easy burden to bear.

Reply
Upvote
@gu3st His name is not Earl.

Reply
Upvote
2 upvotes
@mamamia-user-482898552 Well, I hoped to be allotted a little poetic licence, but also used 'referred to'.