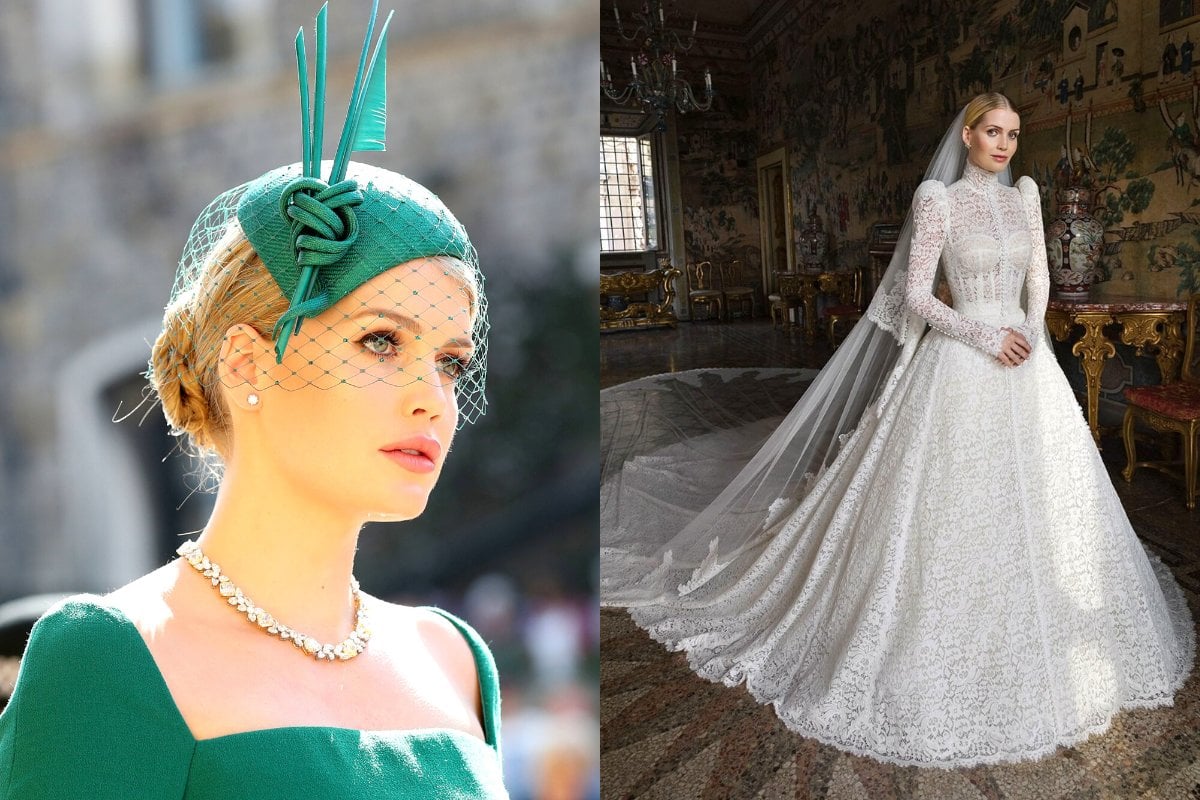 Lady Kitty Spencer, niece of Princess Diana and cousin of Prince William and Prince Harry, has married her fiancé in a lavish Italian wedding.

The 30-year-old model, who was the celebrity guest at the 2019 Melbourne Cup, has been dating 62-year-old Michael Lewis, the millionaire chairman of fashion retail company, Foschini Group, for three years. He is five years older than Lady Kitty’s father, Earl Spencer, 57.

They went public with their relationship during a 2019 holiday in New York, but are believed to have been dating since 2018.

The bride wore five custom gowns by Dolce and Gabbana for the major event in Rome, including a lace bridal gown inspired by her mother Victoria Lockwood's dress for her wedding to Earl Spencer in 1989.

The Italian fashion house said each outfit was designed to celebrate "the beauty of the bride, the passion for #AltaModa and the absolute joy of the occasion."

The couple never publicly confirmed their engagement. Engagement rumours have swirled since June 2020 when Lady Kitty was photographed wearing an enormous diamond on her left ring finger at a masquerade ball. Neither of the pair commented at the time and the ring vanished from subsequent photos, so the tabloids calmed down for a bit.

But it was legit.

At the time, an anonymous friend of Lady Kitty (who definitely, maybe, wasn’t made up) confirmed that the South African-born businessman proposed before Christmas: "She's been in Cape Town for the holidays and told her mother and the rest of the family. Michael is loved by all of them. Despite his wealth, he’s very humble and low key."

More on him later. But first, a pertinent question…

Who is Lady Kitty Spencer?

With a name like hers, it'll be no surprise that Lady Kitty Eleanor Spencer comes from British noble stock. She was born in London on December 28, 1990, to model Victoria Lockwood and Charles Spencer, 9th Earl Spencer, who is the younger brother of Diana, Princess of Wales.

Lady Kitty was just six years old when her aunt died in a car crash in a Parisian tunnel, but told Vanity Fair in 2016 that she remembers her fondly.

“There are only a few memories, but special and happy memories,” she said, “and I’m so lucky to have those.”

Lady Kitty is the eldest of three children, and four younger half-siblings through her parents' second and, in her father's case, third marriages.

Yet despite her British heritage, Lady Kitty was raised in South Africa from the age of five, where she attended a private school called Reddam House.

"I'm really glad I had a childhood in South Africa. There are not many places in the world where you can actually have something that's so free, just natural and relaxed," she later told Harper's Bazaar."I was lucky to have a childhood there."

She remained in Cape Town for university, where she studied psychology, politics and English literature, before returning to London to earn an MA in Luxury Brand Management at Regent's University.

But like her mum, her success has come through modelling; a career boosted, at least in part, by the attention she received after her cousin's wedding.

"I thought I had someone else's phone": How the Royal wedding made Lady Kitty an Instagram star.

Standing out among the likes of George and Amal Clooney, Serena Williams and the Beckhams is no mean feat. But Lady Kitty Spencer did just that when she arrived at St George's Chapel, Windsor, in May 2018 to watch her cousin, Prince Harry, marry Meghan Markle.

She'd made her modelling debut in Tatler magazine three years earlier and walked for Dolce & Gabbana in Milan Fashion week. But after her appearance in one of the label's dresses at the ceremony, her profile went bananas. There were tabloid headlines, best-dressed declarations and huge interest on social media.

"I thought I had someone else’s phone when I woke up the next morning," she told Harper's Bazaar. "I had to turn my notifications off because my phone was going to die.”

Then, just days later, came an announcement that she was to be the face of luxury jewellery brand, Bulgari.

“I do feel like I sort of snuck through the back door and no one’s noticed yet. That’s the feeling I get, especially at shows,” she told Harper's Bazaar. “I keep thinking that this is potentially short term and a really exciting moment, so I’m trying to embrace it for what it is. And then when it does end, just being grateful because it was something I never imagined in the first place.”

She's also hinted at the possibility of working on a fashion line down the track.

And she has that luxury. Because despite being the first-born of a noble family, her future isn't entirely mapped out.

Why she won't inherit her family's estate.

Lady Kitty won't be inheriting everything that comes with her noble name.

Thanks to primogeniture, an archaic feudal dictate that sees the right of succession granted to the eldest male heir, that responsibility will go to her younger brother, Louis Spencer, Viscount Althorp. (The Royal family ditched this system in 2013, but it still exists among the British aristocracy.)

And Lady Kitty is fine with it. Outwardly, anyway.

“In general, I’m totally pro gender equality. But I’m quite happy that that’s [going to be] my brother’s responsibility. I just think it’s the correct way," she told The Telegraph in 2015.

“I like that the house stays within the same family with the same surname. I wouldn’t want it any other way for the Spencers. And I just know my brother is going to do an impeccable job".

Instead, she's said she'll remain focused on her fashion career and charity work. She's an ambassador of Centrepoint, an organisation that supports homeless youth, and a patron for Give Us Time, which funds holidays for military families.

For the most part, Lady Kitty has kept her private life just that, and has rarely commented on her romantic relationships.

But the British media have managed just fine, regardless. Thanks to The Mirror, for example, we understand that current partner/rumoured fiancé, Michael Lewis, is worth roughly AU$163 million and has three adult children from his previous marriage.

Prior to the relationship with Lewis, Lady Kitty dated Niccolò Barattieri di San Pietro, a property developer who she was with for close to four years before they split in 2017. (He reportedly went on to date Liz Hurley.)

She has confirmed they are still friends. In fact, she told Harper's she's friendly with all her former partners.

"If you haven’t got kindness, you haven’t really got much," she said. "The men that I’ve been with have been kind and still are. And it’s lovely because it’s like a greater form of friendship in a way."

Lady Kitty and Lewis' wedding took place in Rome on July 24, 2021, after they initially had to postpone due to the coronavirus pandemic.

The delay appeared to work out for them however, as the ceremony took place on the weekend of Tu B'av, known as the Jewish day of love.

It is believed Lady Kitty converted to Judaism before their marriage.

They tied the knot at the Villa Aldobrandini in Frascati, Italy, in front of friends and family. The country mansion venue is known for its views overlooking Rome.

Neither Prince William nor Harry attended the nuptials.

Lady Kitty has been quiet about the wedding on her social media, but shared images from what appeared to be her hen's night in the days leading up to the weekend.

This article was originally published on January 8, 2020 and has been updated.

Reply
Upvote
I'm so confused. The article appears to be related to recent events but the comments are 2 years old.
I mean, I know the whole Covid lockdown has warped time perception for everyone so 2 years seems like 2 months but this is just the proof
R
Rachel Hamlen 3 years ago

She seems nice. Shame about endorsing the suffering of innocent animals.