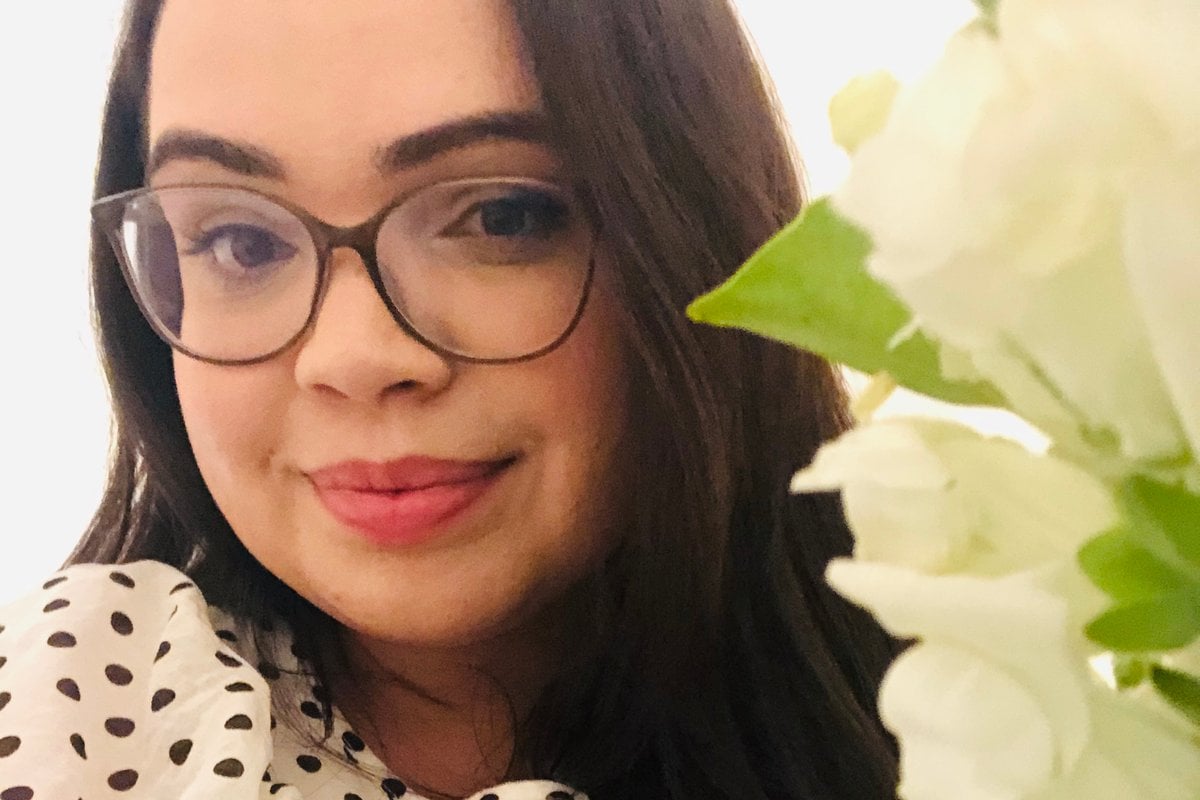 It was a Wednesday morning. I was 17 and getting ready for school. My mother ducked out to drive up to the shops to take out money for recess and lunch for both my sister and I.

I vividly remember brushing my hair when the house phone rang. I stopped what I was doing and went to answer it. I heard my mother crying on the other end, asking me to come to get to her. She’d been pulled over by about nine or 10 police officers for driving on a just expired registration. I hung up, locked the house and raced over to my elderly neighbour’s house asking her to please drive me to where my mother had been pulled over.

Watch: Why I can't get over the Stolen Generations. Post continues below.

We arrived five minutes later to find three cop cars and three cops surrounding my mother… one was screaming at her. My mother was crying… unable to comprehend the intimidation tactics of the police that pulled her over.

I ran over to her and immediately calmed her down before turning around and yelling back at the cop to stop yelling… that his yelling was unnecessary.

“She can’t drive with an expired registration!” he yelled.

"I know but yelling at her isn’t going to change the fact that she did. You can’t yell at her. There is no need to."

My response was calm but stern.

I was a 17-year-old, terrified and intimidated Aboriginal girl standing up to the police for their treatment towards my mother.

This was my first and last experience with the police.

Today as a 28-year-old woman, I am anxious every time I see a police officer or police car. My chest tightens, I feel a lump in my throat and I instinctually assess my demeanour, actions and behaviour.

“Will the police take an issue with anything I am doing at this moment?” is the thought that runs through my mind.

As an Aboriginal woman, I have been conditioned to fear the police… not to feel as though they are the people who are supposed to protect me should I need it.

Why is that, you ask?

Think about it… have Aboriginal and Torres Strait Islander people ever been given reason to trust the police?

I know in my family that the police played a role stealing my mother and her siblings as part of the Stolen Generations.

There have also been 437 Aboriginal deaths in custody. That number builds no confidence in Aboriginal people feeling safe should they end up being arrested… more often than not for petty crimes (or things that aren't crimes at all.)

Listen to The Quicky, Mamamia's daily news podcast. In this episode, our host Claire Murphy discusses four Indigenous businesses killing it in 2020. Post continues below.

Ms Dhu, a Yamatji woman from Western Australia, was arrested after calling the police after her then partner broke the Apprehended Violence Order (AVO) against him. When police arrived, they found she had unpaid fines and arrested her. During her three days in police custody, she was treated inhumanely and dismissed as having “behavioural issues” as opposed to serious medical issues. Every police officer involved in her case failed her. No one advocated for her.

Aunty Tanya Day, a Yorta Yorta woman from Victoria, was arrested for falling asleep on a train. Apparently being drunk in a public place is an offence for an Aboriginal woman but not for non-First Nations teenagers and young adults who ride trains and buses with open bottles and cans of alcohol.

Both these women lost their lives in police custody.

The targeted racism towards Aboriginal and Torres Strait Islander is unsettling.

Again and again, Aboriginal people are given no reason to trust that police have their best intentions for us.

Rather than immediately stereotyping us, treating us as criminals… stop. Talk to us. We’re already scared. We know the power you have and it is intimidating.

My mother was stereotyped. Treated like dirt because of an expired registration. Belittled and humiliated. Today, I live in fear because of that experience. By continuously treating First Nations people like criminals without listening, you won’t gain our respect or trust.

Become a police officer who values and treats every Australian as an equal. Don’t talk to us about reconciliation without assessing your own actions and expecting us to do the hard work. Respect and trust is earned when you’ve continuously broken it in the past.

Reply
Upvote
4. It’s easier for people to blame police and wash our hands of the issue but the root issue is indigenous inequality and until that is addressed more aboriginal people will end up incarcerated and as a result there will continue to be aboriginal deaths in custody.
C
cat 2 years ago

Reply
Upvote
@mamamia-user-739637812 there can be more than one issue. Yes, it’s a huge issue that indigenous people are over represented in the prison population. But it’s also an issue that they are treated in such a way that they are significantly more likely to die in custody. That’s not to say it’s about ‘bad apple’ officers, it’s that we need to look at all the elements that cause these deaths, including the medical professionals who see indigenous people in custody and dismiss them as ‘faking’ their pain and illness.
S
snorks 2 years ago

Reply
Upvote
6 upvotes
@cat
'But it’s also an issue that they are treated in such a way that they are significantly more likely to die in custody' - I've never seen figures that say that. The ones I have seen say that non-indigenous people die at a greater rate.
R
random dude 2 years ago

Reply
Upvote
5 upvotes
@cat The key issue is the over representation in the prison system and should be focused on.
According to the National Deaths in Custody Program (NDICP) Indigenous people are now actually less likely than non Indigenous people to die in prison custody. This is not the significant issue you believe it to be and just muddies the water for discussion about the topic.
M
mamamia-user-739637812 2 years ago

Reply
Upvote
4 upvotes
@cat - aboriginal people are statistically 16 times more likely to be incarcerated however there is no statistics to back that they are more likely to die in custody. All I am trying to say is that the problem isn’t JUST police and the justice system it’s a societal problem we non-indigenous people wipe our hands of by pushing the blame onto somewhere else. I just am over the police being blamed for everything when really we ourselves should be shouldering some of that blame for not lifting a finger to help where we should. I suggest following and buying from a few indigenous businesses and educating ourselves as to the proper history of Australia is a good way to start. But improving health care, education and working on the justice system to better help aboriginal people not become another statistic is what we as the community should be doing.
M
mamamia-user-739637812 2 years ago

Reply
Upvote
3. Our government caused numerous emotional and mental injuries to the aboriginal people during stolen generation and have never truly made reparations causing a domino effect of mental health, poverty, lack of opportunities, addiction issues and as a result the justice system fails every time an aboriginal person is put through it.
Of course I am sure that there is bad police and one is one too many given that they’re actions can completely affect our lives however, simply saying it’s a police issue and ‘f**k the police’ is not solving any problems and absolving everyone else of they’re collective guilt and blame for what is a societal issue.
News
General
Opinion
True Crime
Politics
Sport
Explainer
Entertainment
Celebrity
Reality TV
Movies
TV
Books
Rogue
Royal
Lifestyle
Beauty
Fashion
Weddings
Home
Wellness
Health
Fitness
Travel
Food
Family
Before The Bump
Pregnancy
Baby
Kids
Teens
School
Parent Opinion
Work & Money
Money
Finance
Career
Lady Startup
Relationships
Sex
Dating
Separation
Friendship
Family
Real Life
Couples