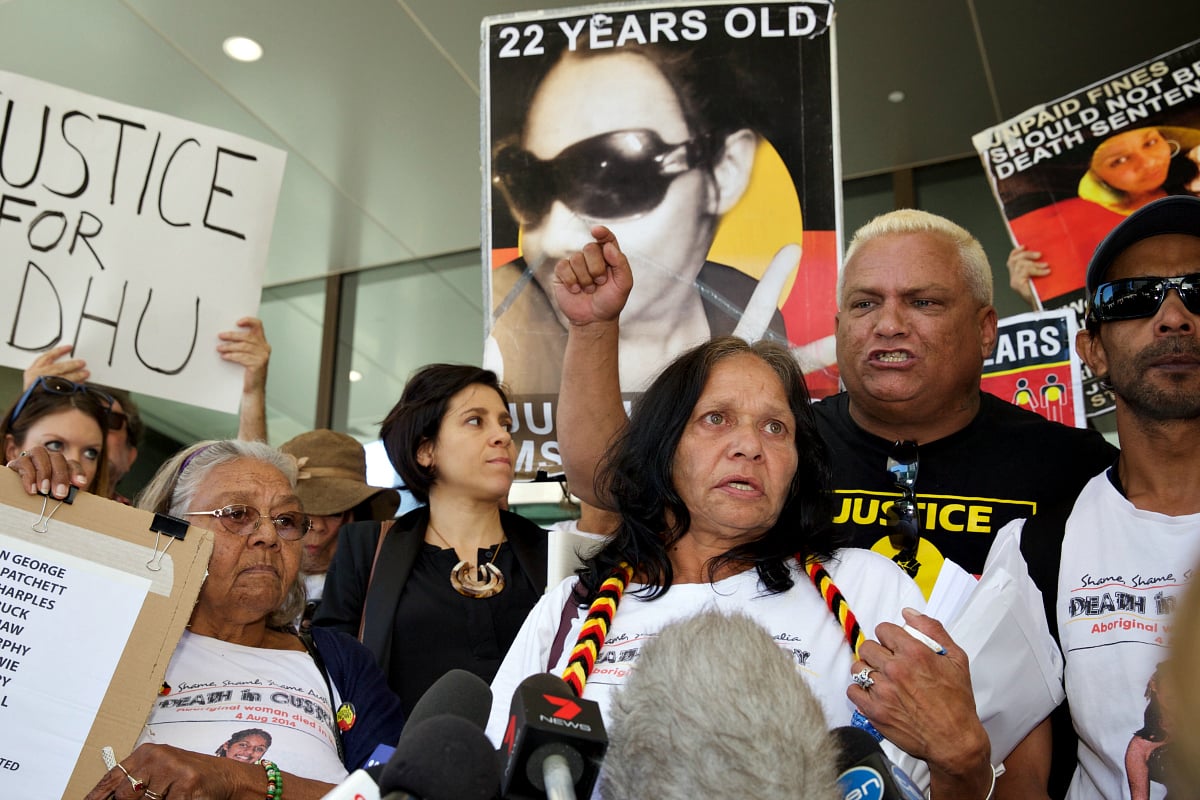 Warning: the following contains details that may be distressing.

Ms Dhu was 22 years old when she was dragged, handcuffed, from a cell at South Hedland police station in Western Australia on August 4, 2014. The Yamatji woman was limp, aside from small movements of her head and hands.

Two officers loaded her into the back of a police van, and drove to a nearby hospital. It was her third hospital visit in as many days, due to pain caused by previously broken ribs. It was also her last.

Ms Dhu, whose full name is withheld for cultural reasons, was pronounced dead by hospital doctors that afternoon.

Aboriginal and Torres Strait Islander readers are advised that the following may contain images and voices of people who have died. Post continues after video.

In 2016, the Western Australian Coroner concluded that Ms Dhu had died of septicaemia and pneumonia.

The inquest heard that a police officer at South Hedland lockup thought Ms Dhu was "faking it", when she complained of feeling unwell.

"In her final hours she was unable to have the comfort of the presence of her loved ones, and was in the care of a number of police officers who disregarded her welfare and her right to humane and dignified treatment," the coroner concluded.

The reason for Ms Dhu's imprisonment?

Ms Dhu was imprisoned under controversial WA law, which saw people who are unwilling or unable to pay a fine serve time in police or prison custody instead. Each day behind bars counted as $250 towards the amount due.

Late on Tuesday, the Western Australian Government passed legislation to change that.

Under the amended laws, most fine defaulters will be ordered to perform community service, and imprisonment will be a last resort that can only be ordered by a magistrate.

The changes, which were among the recommendations of Ms Dhu's coronial inquest, follow a six-year campaign led by the 22-year-old's family.

The family was represented in their lobbying efforts by the Aboriginal Legal Service of Western Australia and the Human Rights Law Centre, which argued the laws disproportionately affected Indigenous women.

A 2016 report into the imprisonment of fine defaulters in WA, found that Indigenous women accounted for two-thirds of all females jailed under the laws. They also accounted for 64 per cent of the women who were unemployed at the time of their entry to prison.

"Unpaid fines should not be a death sentence," ALSWA CEO Dennis Eggington said in a statement.

"There is no doubt that jailing people for unpaid fines disproportionately affected Aboriginal people in WA.

"It had a devastating and fracturing effect on children, families and communities and exacerbated the overrepresentation of Aboriginal people, particularly women, in the justice system by criminalising the effects of racism, poverty and disadvantage."

"My granddaughter paid the ultimate price."

Wednesday's reforms come nearly 30 years after they were recommended by the 1991 Royal Commission into Aboriginal Deaths in Custody.

In a statement issued via the HRLC, Ms Dhu's grandmother, Carol Roe, welcomed the changes but said they were "too late".

"My granddaughter, Ms Dhu, paid the ultimate price for these racist laws," she said.

"She should be alive today — it’s been almost six years since she was killed in that police cell and not a single police officer or government official has been held to account.

"Mine and my family’s lives have been changed forever, we will never stop grieving. The Government must end Aboriginal deaths in custody. Justice is long, long overdue."