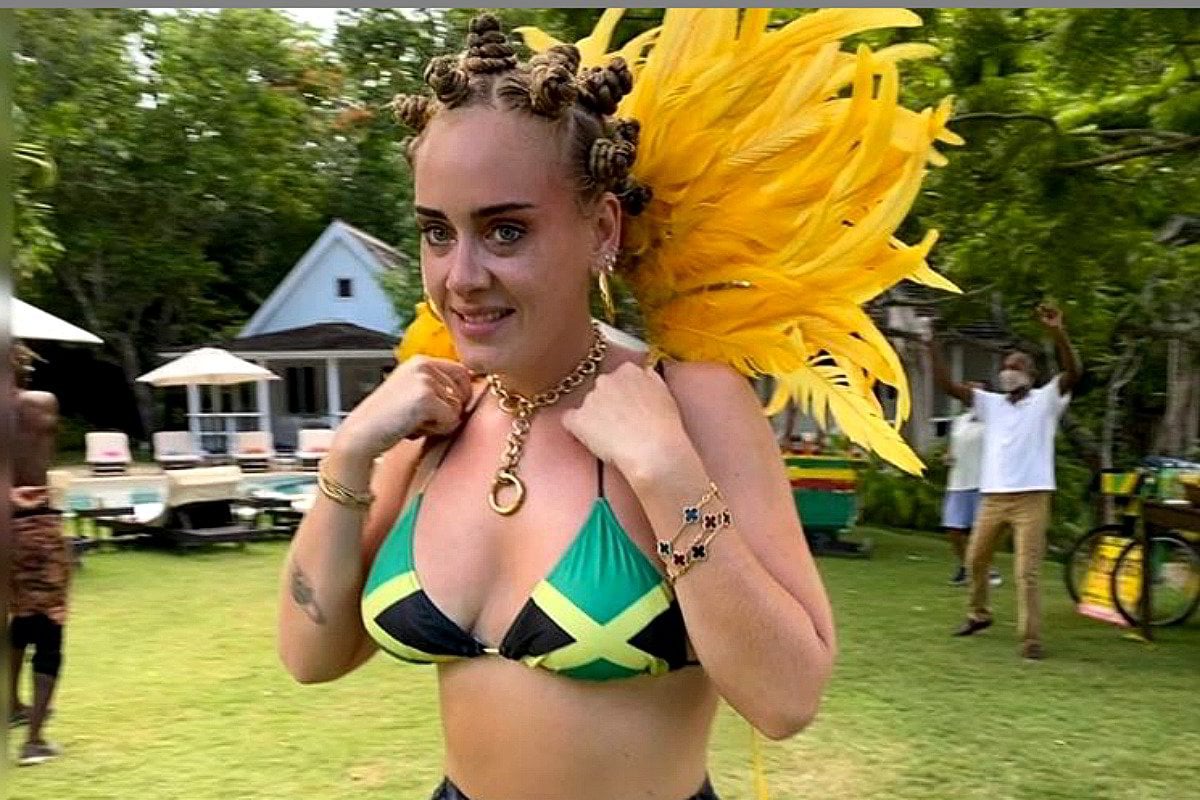 In the image the 32-year-old Grammy winner is wearing a Jamaican-flag bikini top and has her hair twisted into Bantu knots.

From the caption posted alongside the image, Adele shows her support for the Notting Hill Carnival, an annual event which celebrates Caribbean culture and interracial tolerance.

Due to be held on August 30 and 31, the event was instead held virtually this year due to the COVID-19 pandemic.

The image has been labelled as cultural appropriation by a number of commenters and writers, mainly due to the fact that Adele chose to have her hair styled in Bantu knots, a traditional African hairstyle with a history that dates back hundreds of years.

Happy what would be Notting Hill Carnival my beloved London 🇬🇧🇯🇲

On The Spill, Mamamia’s daily entertainment and pop culture podcast, host Kee Reece explained how Adele's intention to support the event feeds into how we should see the image, but her choice of hairstyle is still hurtful when you take into account its history.

“It stems from the conversations we have been having lately around the Black Lives Matter movement, and just really holding people accountable for blatant borrowing of certain elements of Black culture," Kee said on The Spill.

“I had quite a few people send it to me and my first thought was ‘I really don’t want to cancel Adele because she had always felt like a safe ally for me'.

"But now I’ve read into it and I do understand the context and why some people from the Caribbean culture are saying it’s appreciation because the Notting Hill Carnival is about unifying cultures.

“I understand why Adele wanted to align herself with that, but I also understand why people are saying that there was a healthy debate here to be had."

To listen to the full conversation around Adele's image, how money plays into the equation, how Black women's hair has been treated in Hollywood over the years and which celebrities have commented on the photo, listen to this episode of The Spill.

“There is so much cultural sensitivity around textured hair," Kee continued on The Spill. "Even with all the conversations we have around Black culture and the learning we are all doing, there is still so much pushback around Black hair that people don’t understand.

“For me, there is so much rich history in the hairstyles that people have taken over. It goes back into the history of hairstyles that have been discriminated against like cornrows, Bantu knots, braids and dreadlocks.

“All these looks are still widely perceived today as not being appropriate at all in some cases. So when you are a person of colour, even if you understand that Adele has done this in celebration of Caribbean culture, it still hurts to see it.

“When you take those traditional hairstyles and you put them on a white person, it just sits differently.”

Reply
Upvote
6 upvotes
Not trying to be a smart arse, just trying to understand. I have questions:
If 99 people from that culture/ethnicity are not offended, but one is, is Adele still in the wrong?  Is it right for a person of any ethnicity who has textured hair to be offended on a person of Jamaican heritage’s behalf, or not?  Does it make a difference that Adele was attending a festival of Jamaican culture, or not?  Should the person who did her hair also be criticised, even if they themselves are of Jamaican heritage? Why/why not?
I understand not wanting to have your cultural heritage denigrated.  My overarching issue with it is who gets to be the arbiter of what is, and is not appropriate, and why.
L
laura__palmer 2 years ago

Reply
Upvote
5 upvotes
@elishatraill I agree. If a person of African heritage is offering a braiding service to white people, then why does someone else (often not of African heritage) get to come along and say that is wrong? What about people who are white passing? What about people like Kim K, who braided her hair with her POC child?
Also, if a white person has hair that is suited to, say, dreadlocks, then they should be able to have dreadlocks. Or if their hair is more manageable with braids, then why can't they have braids? I don't see how making it taboo for white people to have certain types of hairstyles is going to make it easier for POC to be accepted with those hair styles.
I'm happy to be enlightened on this, but I just can't see how policing hairstyles helps anything. Hairstyles like these date back thousands of years, and run through many cultures, so I don't understand who decides who can have which hairstyle.
C
cat 2 years ago

Reply
Upvote
@laura__palmer the issue is that POC are still discriminated against for those hairstyles, while white women can wear them without repercussions. It’s like how Hugh Hefner made billions publishing Playboy, while sex workers are called criminals. I think most of us would agree that Hugh Hefner was exploitative and distasteful and if he really wanted to support women he would have advocated for sex workers without cashing in. If we lived in a totally equal and free society and all the models were paid well and empowered then playboy would be fine, but we don’t.
And white hair really isn’t ever suited to braids or dreadlocks, there’s absolutely no reason that we need to have them. No one Is saying that we can’t plait our hair but that’s not the same thing as getting cornrows.
If an African lady had a braiding stall at the festival and Adele paid for her hair to be braided that would be totally fine. But posting it on Instagram without mention in the context & artist would then have been the issue. It’s simple- genuine cultural appreciation is when you don’t get anything out of the situation , in terms of status, attention, or money, and when the focus is directed towards the owners of that culture.
L
laura__palmer 2 years ago

Reply
Upvote
1 upvotes
@cat "the issue is that POC are still discriminated against for those hairstyles, while white women can wear them without repercussions."
I get this, but I don't see how making it taboo for white people helps that.

Also, where does the policing end? What if a Japanese guys gets cornrows? They are a first world, industrialised nation who colonised other cultures. Are they allowed to have dreads or cornrows?

As I've said, no one has "ownership" over hairstyles that moved through cultures for thousands of years, so who gets to decide?
C
cat 2 years ago

Reply
Upvote
@laura__palmer because when white people take aspects of the cultures they’ve colonised and appropriate them, it erases the history. It takes the cultural significance away from the hairstyle (which is a tradition that grew in the US after all other aspects of African heritage were forcibly erased), and it also glosses over the history of oppression and discrimination. It is a light form of cultural genocide- sure, it’s not the same as destroying a whole language or a religion, but it enables that in the same way that casual sexism enables rape culture. And since white Americans did destroy their languages and religions, it’s particularly egregious to appropriate the culture they developed in response.
And also Black people say it’s upsetting, which should be good enough reason not to do it. Similar to how people being offended by Chris Lilley is a good reason to take down his shows. People from the minority groups being represented/exploited are the ones who get to decide what’s okay.
And no, a Japanese guy shouldn’t get cornrows- nor should an African American woman dress as a geisha.
There really isn’t any historical evidence of white people wearing braids- there’s some argument that Vikings and celts had dreadlocks, but it was due to a lack of grooming rather than tradition. There’s certainly no active culture around braids and dreads amoung white people the way there is with African Americans and African culture.
C
cat 2 years ago

Reply
Upvote
I can’t see a flag bikini as appreciation of any culture.
E
elishatraill 2 years ago

Reply
Upvote
1 upvotes
@gu3st I was, but I think the point stands either way!! 😉
G
gu3st 2 years ago