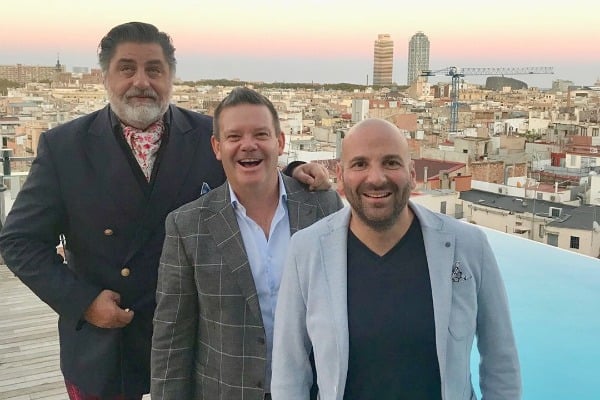 It was only a mere two days ago that news broke judges Matt Preston, Gary Mehigan and George Calombaris would be leaving MasterChef Australia, but the high-profile trio aren’t wasting any time planning their next move.

The MasterChef judges, who’ve become household names since appearing on the show when it first aired back in 2009, have been in confidential discussions about a new series with rival TV networks and streaming services, according to The Sydney Morning Herald.

Under their new production company GaryGeorge&Matt (GGM), only formed in February this year, the three are developing a concept for a new show aimed at a global audience, and are currently in talks with Netflix and Amazon, reports news.com.au.

Things I say while watching The Voice. Post continues after video.

According to The Daily Telegraph, the three are pursuing a “multimillion-dollar” deal with a major streaming service.

The show would likely see the former judges travel to different countries, particularly in India where the trio are popular.

But with Calombaris’ personal brand taking another massive hit in recent weeks due to the $7.8 million underpayment scandal engulfing his empire of restaurants – thus hurting the reputations of his co-stars by association – it remains to be seen if there’s still any appeal for the “three musketeers” in another cooking show.

Last week, unions called for Calombaris to be fired from MasterChef. There was also a petition, started by Orlaith Belfrage, a former employee of Hellenic Republic who is still owed $2000, demanding Calombaris’ sacking.

“George should pay a serious price for this massive theft of workers’ wages,” Belfrage said in a statement. “A three per cent fine is not enough.”

Why the MasterChef judges really left. Post continues after podcast.


“He should be taken off MasterChef. Channel Ten should stop making excuses for this serial wage thief.”

Since the announcement of the star judges’ departure, it’s been heavily speculated that the trio left the show due to disputes over their pay, with the trio asking for a 40 per cent increase to their already $1 million salaries.

With viewership declining in the latest season of MasterChef – the finale also had its lowest ever audience of 831,000 – Network 10 severed their association with the judges after negotiations failed.

“Despite months of negotiation, 10 has not been able to reach a commercial agreement that was satisfactory to Matt, Gary and George,” Network 10 chief executive officer Paul Anderson confirmed to Mamamia.

However, Calombaris, Preston and Mehigan have shared their own personal statements on the matter, insisting that the decision “wasn’t about the money”. Instead, it was about the length of the new contracts and the opportunities to work with rival media companies.

“We were close to signing a new contract for season 12 however the dates just didn’t align,” George Calombaris wrote on Instagram. “Channel Ten, thank you for providing us the platform to change the landscape of food worldwide.”

@masterchefau geez you have warmed our hearts, filled our stomachs and sizzled our souls. To the great contestants of the past 11 years, you ought to be proud. To the incredible @masterchefau team that works so hard to make the best cooking show on earth, we salute you. To our families, friends and teams who have supported us, you freakin’ rock. We were close to signing a new contract for season 12 however the dates just didn’t align. Channel Ten, thank you for providing us the platform to change the landscape of food worldwide. To the next 3 judges and mentors, we wish you loads of success. To my brothers @mattscravat and @garymehigan: I love you and thank you. Time to take a deep breath and be thankful. With love GC ???? xxx

Matt Preston shared the same photo on Instagram, writing: “It is with a heavy heart that I can confirm that season 11 was our last. We were really keen to continue but we were unable to agree to all terms for the new contract”.

Judge Gary Mehigan also shared a statement on Facebook, adding: “It was time to move on, have more free time to explore our own creativity. It was never about the money and never will be about the money. We couldn’t agree on the term of the new contract for 2020. Something we felt very strongly about”.

Ten is yet to announce who will replace Preston, Mehigan and Calombaris, but reports yesterday suggested Maggie Beer, Curtis Stone, and Poh Ling Yeow could be taking over the reigns of season 12 next year.

Does anyone even still like George? Why would you go into business with him? He's pretty tainted.

It seems like the trio wanted their next contract to end immediately after season 12 in August of 2020 whereas Ten wanted it to go longer - in that context, it seems reasonable to me that they'd want to be paid for that additional time.

Calombaris is a chef: the set up of the business that pays his workers would have been the responsibility of the people he delegated it to when setting up the company. The important thing to me is what sort of effort he's made to correct the situation when the underpayments were brought to his attention.

You're being generous in assuming he was totally oblivious to endemic underpayment in the business he ran and owned...

That he was a director of - it doesn't seem like he was ever Chairman of the Board or CEO. Calombaris certainly seemed like the angriest on earth of the three - that sort of high end food suggests it and also that incident with that spectator at the AFL - but I'm willing to extend the benefit of the doubt

Based off some of his comments, he knew he was underpaying his staff.

Given that underpayment is rife within the hospitality industry, I am less inclined to assume he's totally oblivious here. Similarly, other celebrity chefs have been caught underpaying their employees - with this recent scrutiny, I daresay lots are covering their tracks as we speak.